In what is now pretty much the standard IncGamers episodic game review fashion, this article will have glaring SPOILERS for Game of Thrones Episode One. It may also have spoilers for parts of George RR Martin’s books and the fourth season of HBO’s TV version. But that’s Telltale’s fault for setting the game during that period.

Has everybody left who needed to leave? Okay, good. 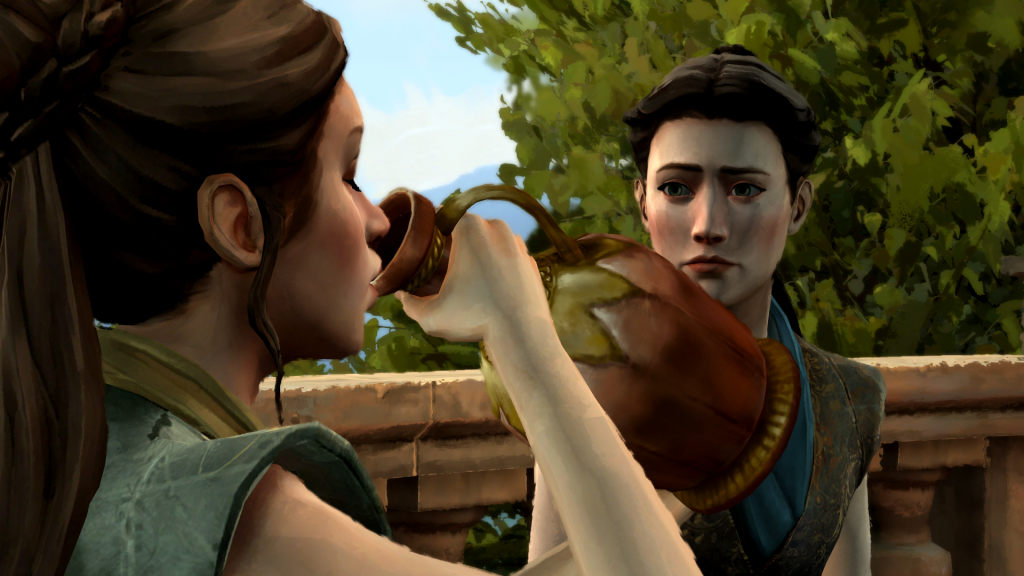 That’s it, drink the pain away.

Damn, the Forrester family got properly shat on last time, didn’t it?

That’s not too surprising, of course. This is Game of Thrones after all. But Episode Two begins with three of the family dead, one still in exile and another held hostage by arch-rival House the Whitehills. It’s not quite a Stark-level hammering (nobody’s burned down the Forrester castle … yet,) but you can forgive their erstwhile allies for being a bit iffy on continuing to associate with a House so clearly in decline.

After so much grimness up North in Episode One, it’s kind of refreshing for Episode Two to drop players into sunny (albeit horribly chaotic) Yunkai as the estranged Asher Forrester. Asher’s sections are briefer than I was expecting, but he’s just the gallivanting sell-sword type I was hoping for. Knocking about with formidable companion Beskha, Asher spends most of his time putting axes and sword blades through anatomical parts of the Lost Legion of Essos.

By that I mean it’s mostly quick-time button presses in contemporary Telltale style, but it provides a little necessary catharsis on behalf of the other Forrester family members. At least one of them is in a position to cut loose with some direct agency. 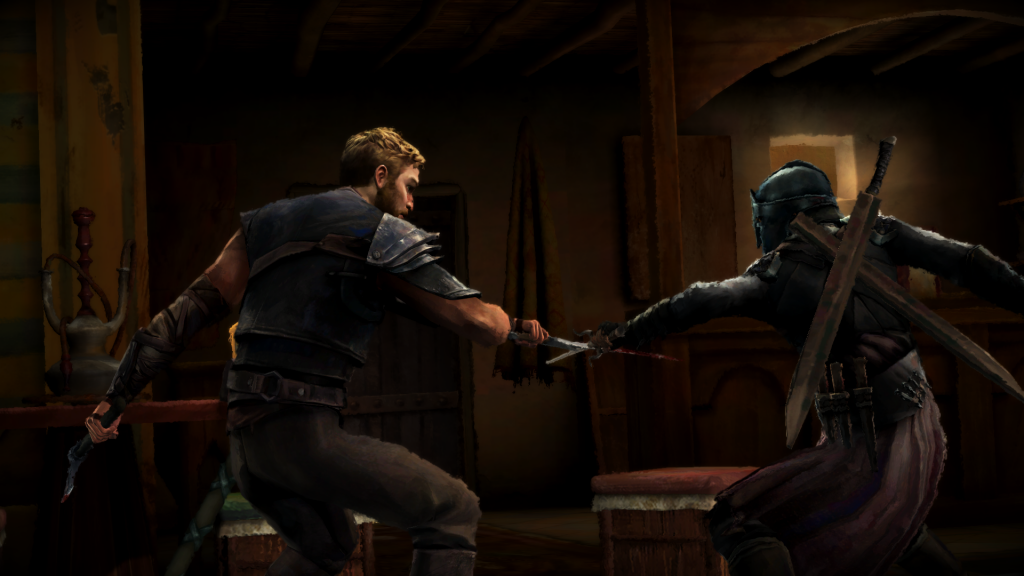 Asher gets down to business.

Elsewhere, former squire Gared Tuttle has reached The Wall and finds himself thrust into the usual Night’s Watch initiation ceremonies. In other words, proving himself capable while thuggish elements try to push him around.

Like a lot of this Game of Thrones season to date, this is a bit of a retread of territory already covered by both the books and the HBO show (of which the vast majority of players will already have consumed at least one.) It’s not really Telltale’s fault that Tuttle’s tribulations are something we’ve already seen with Jon Snow and others, it’s just that this translation to a third medium results in some inevitable repetition of themes and circumstances.

To their credit, the writers do their best to acknowledge this and turn it into a positive thing by having Jon Snow show up and share a bit of a chat with Tuttle about lousy Night’s Watch bullies and back-stabbing Southern bastards.

Structurally, this second Game of Thrones episode seems to take cues from its televisual inspiration, with less time spent in each particular location, but quite a bit of jumping around between each one. This helps to pace the two-ish hours quite well. Rather than Gared’s Night’s Watch trials and conversation with Snow being one lengthy sequence, it’s broken up into several ‘scenes.’ 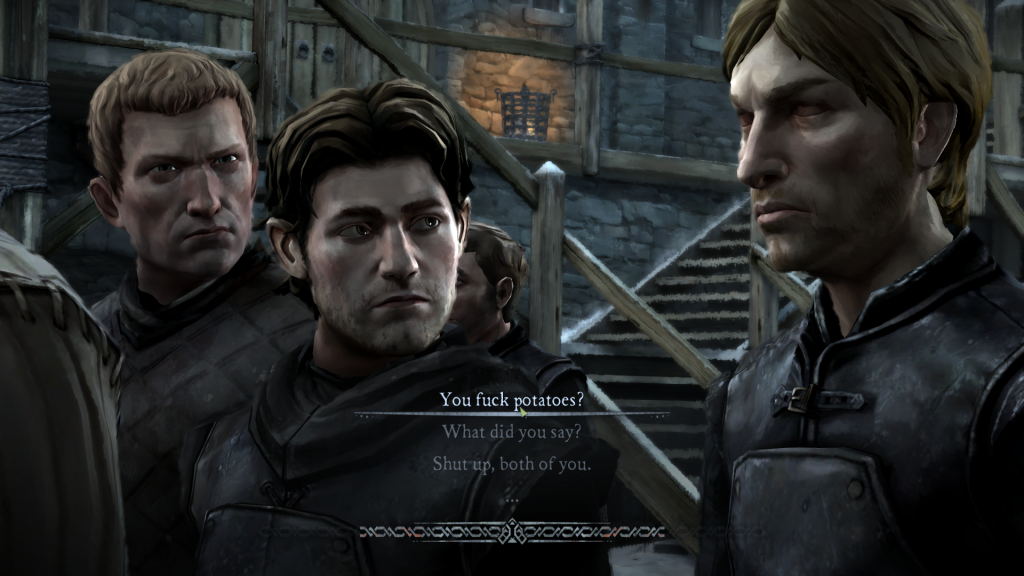 I was pleased to see Gared still carrying around the same random items I had him pilfer in Episode One, though once again he had no opportunity to actually use them. If this all turns out a bit King’s Quest and Gared dies in the last episode because he did (or didn’t) swipe a couple of herbs 8 hours earlier, I don’t know whether I’ll be amused or horrified.

Over in King’s Landing, one of the objects I had Mira squirrel away actually did get a reference. There was even a possible chance to use it; although the game provided a spare just in case.

So, not a whole lot to report on the interactive puzzles front, but if you’re still expecting that from Telltale in 2015 then you’re about three years too late. I know I write this in every single episodic Telltale review, but I do miss the odd bit of item-based puzzle gameplay. Even when they were pretty straightforward.

In happier news, Mira’s story-line is developing hefty doses of intrigue and while most of Episode Two is build-up, the climax to this narrative strand sets thing up rather well for future episodes. 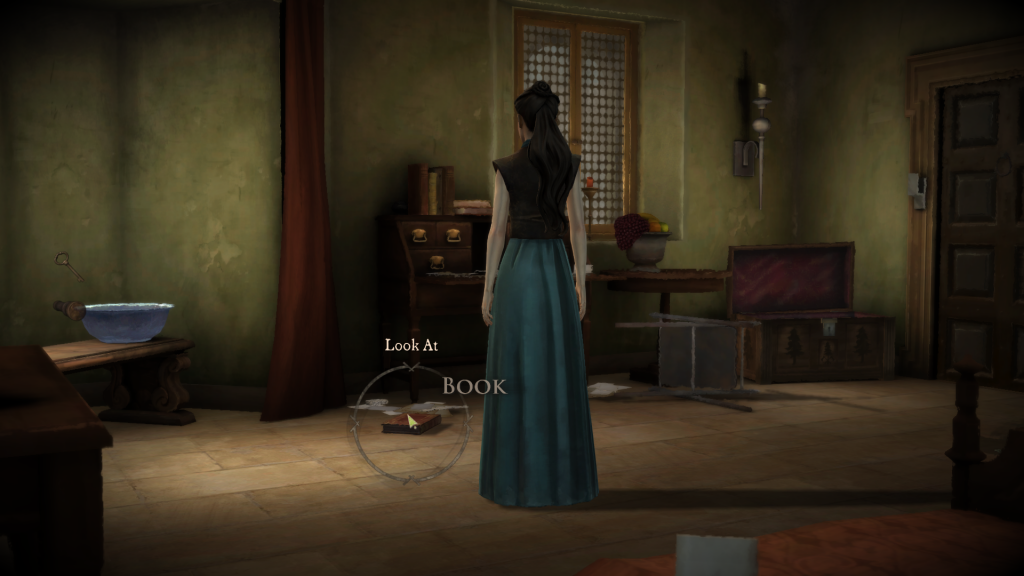 About as close to a Telltale Game of Thrones/Law & Order crossover as we’ll get.

If you’re wondering why I’ve not mentioned much about the Forrester homestead in this review, it’s because the majority of what occurs there is intrinsically linked with a substantial story twist that I don’t wish to spoil. I can get away with saying that it involves at least one weighty decision which should have long-term consequences, and plenty more opportunities to loathe everything about the Whitehills.

Telltale’s baddies have, so far, been rather good at provoking a seething desire for revenge. They’re vain Lords who delight in humiliating various Forresters, and it’ll be delightful if and when any of them get their comeuppance. They’re not, however, all that nuanced. Game of Thrones (or more accurately A Song of Ice and Fire) has its fair share of unambiguous psychos, but it’s also home to some more subtle characters with cloudy motives. Much as I’m looking forward to besting the Whitehills, I hope an original Varys-esque character emerges from this series as well.

He may yet do so in the next four episodes. Or perhaps one of the current cast is already primed to develop in unexpected ways. 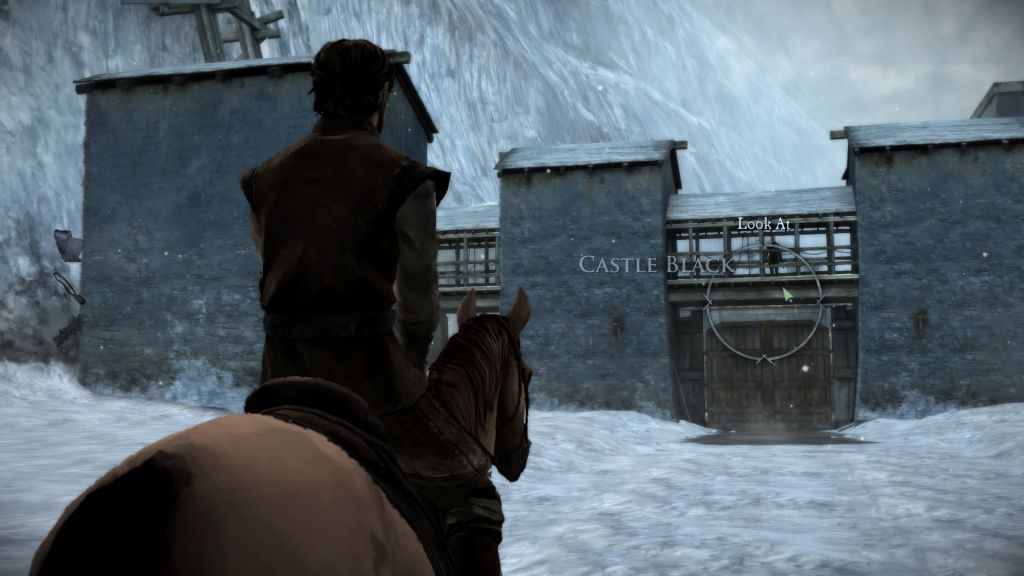 Most of the presentation is marvellous, but that ice texture … yikes.

As with the first episode, Telltale’s oil painting filter produces some mixed outcomes. It functions fine in close-up or medium distance shots, but tends to look pretty disappointing in otherwise well-framed wide views. The studio has steadily been improving their cinematography, and Game of Thrones’ “Lost Lords” provides some fine excuses for imposing shots of (or from the top of) The Wall. Unfortunately, it’s in these in-engine shots that the oil painting effect tends to look at its flattest, muddy worst.

Episode Two gave me a few minor glitches too, like a strange teleporting vase and objects flipping position of their own accord. And for some reason it initially launched on Steam without any achievements.

After the first episode successfully introduced the wide new cast of characters, this second one focuses more on maneuvering said characters into interesting positions and foreshadowing looming conflict. The slow-burning nature of this installment is typified by the decision to eschew the usual cliffhanger drama for a more introspective conclusion. “The Lost Lords” is more set-up than spectacle, but has plenty of engaging character development and leaves Game of Thrones in a position to begin toppling a few of the plot dominoes it’s laid out so far.

Cities: Skylines gets a new video created with unwanted clips