By some unholy coincidence of videogame scheduling, the past few days have been ‘Episodic Game Week’ here at IncGamers. We’ve had the long-awaited second installment of Tales from the Borderlands (Telltale’s other current project,) the continuation of Dreamfall Chapters, and a look at eager indie contender Knee Deep. The new Life is Strange is out this week too.

This third episode of Game of Thrones is the only one to feature a conversation about whether urinating off a gigantic wall of ice could potentially turn piss shards into effective weapons, though. I’m fairly sure about that.

From this point on there will be spoilers for prior episodes. Just so you know. 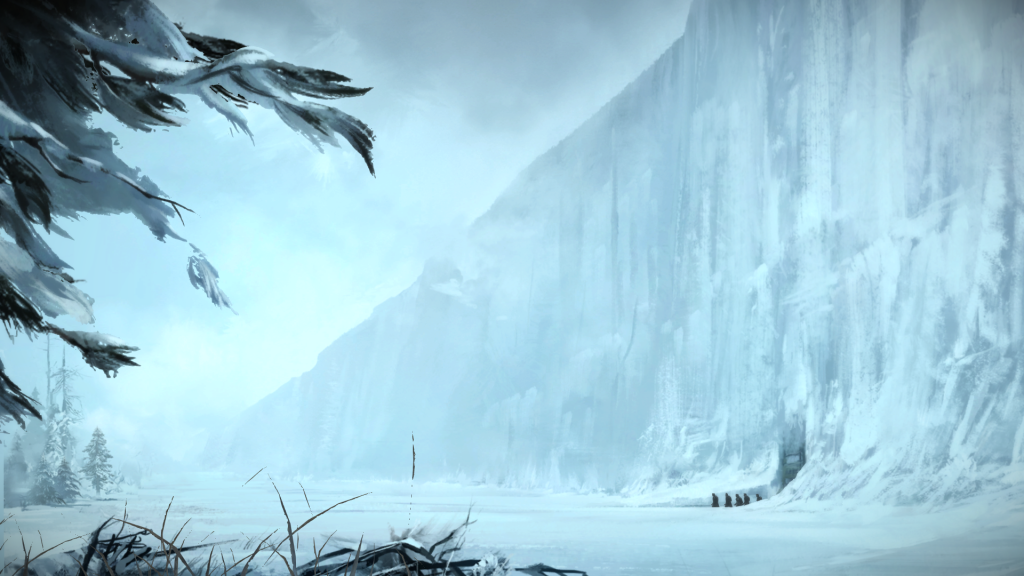 Chances of you hitting anyone at that range are pretty slim, I’d say.

Like the HBO show version, Telltale’s Game of Thrones recognises that you need some comedic release from the rest of the material every once in a while. Otherwise you’re just watching (and in this case interacting with) a set of doomed human beings slowly being ground down and occasionally destroyed by socio-economic circumstances. Speaking of which, life is not getting any better for the Forresters unfortunate enough to still live at Ironrath.

It’s getting to the point where Telltale has made me dread the Forrester scenes. At this point, they’re pretty much the House version of Theon Greyjoy. Except instead of being tortured in new and exotic ways by one guy, it’s a collective effort by a succession of sociopaths who show up at their doorstep. Still, at least the Forresters got Ramsay Snow out of the way in the first episode. The rival Whitehills are really just pretenders at the mental and physical torture game.

Latest in this line of dickheads is Gryff Whitehill, who proudly announces that he is the fouth-born son in a way that suggests he feels this is in some way impressive or relevant. Sadly, this being Game of Thrones, he actually does hold significant political sway over the Forresters for the moment – and makes sure their lives are suitably horrible as a result. So begins another parade of scenes with people being awful to the character you’re controlling (or their immediate family,) with little you can actually do about it. 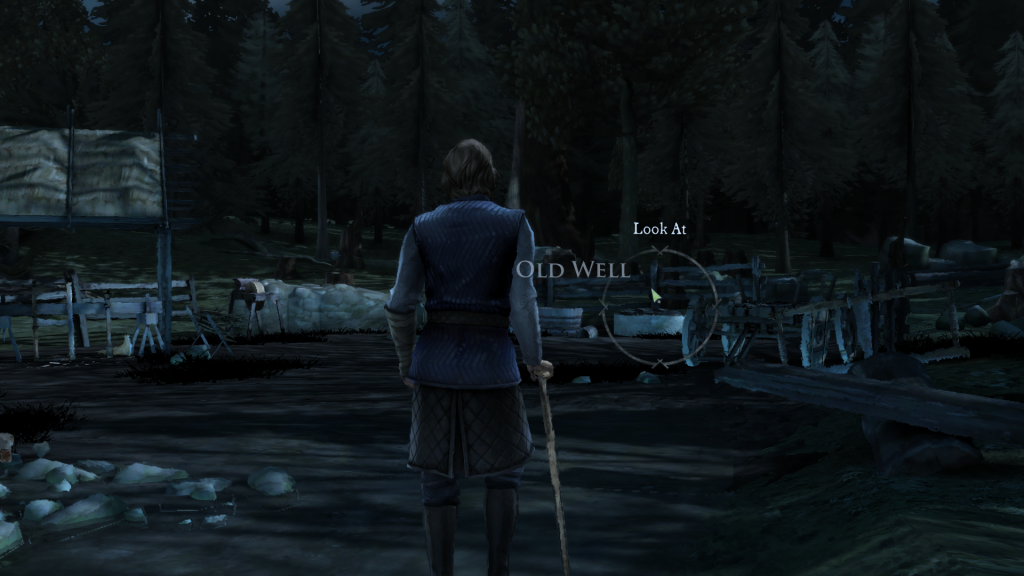 It’s 50/50 whether somebody is going to pop out of nowhere, push Rodrik down this well and then laugh at him.

It’ll be slightly out of character for the Game of Thrones universe in general, but I’m really hoping all of this Forrester hardship is going to end with some major catharsis. Something along the lines of Episode Six just being Rodrik and Talia going through the Whitehill family home, Hotline Miami style.

For now, Telltale is drip-feeding us just enough hope to suggest that if Mira can scrape together some financial aid from King’s Landing, and if Asher can show up with some sort of army, then maybe there’ll be a chance to get out of this abusive cycle.

That’s probably why I found their sections, Mira’s in particular, the most gratifying. After experiencing sequences where the overwhelming feeling is that of helplessness, making choices for characters who have at least some agency is a satisfying release. Further, they’re characters whose actions can directly help the other Forresters. 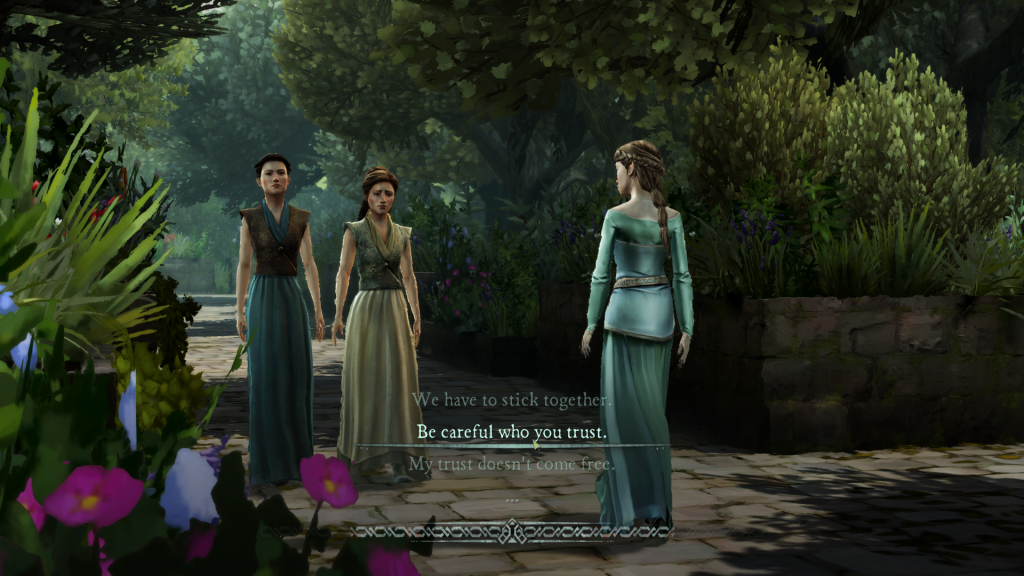 She may have been a little ineffective to begin with, but Mira GETS IT.

Mira may be ‘just’ a handmaiden (and one with a few dangerous secrets, thanks to the conclusion of the prior episode,) but she’s well connected, and has access to both Margaery and Tyrion. The latter presents an interesting situation for this game, because the book readers and Game of Thrones show viewers (who I have to assume constitute the majority of this game’s audience) have prior, inside knowledge of where Tyrion’s arc takes him.

The Sword in the Darkness features Joffrey’s opulent wedding day, so there’s a wry smile to be had about the dialogue option to gently urge Tyrion into signing and delivering the Ironwood contract before the festivities begin.

Joffrey doesn’t appear in this version of the series, of course, so Telltale have to engineer a reason for Mira to be stuck outside the event. It’s a bit convoluted (if only because you know it’s written that way because Jack Gleeson isn’t in this,) and represents one of the few moments where the series has had to rather obviously acknowledge that it has a slightly limited set of Game of Thrones actors to work with. Viewed in a slightly more positive light, this does give players a slightly different vantage point on what is, to most, now a familiar scene.

Mira’s subsequent efforts to retrieve the Ironwood contract result in some impressively engineered moments of tension (complete with a well-worn, but often effective, “fumble with some keys while under pressure” scene.) That felt refreshing, and genuine; in contrast to the wearying feeling that arose when the next routine bullying of the Ironrath Forresters rolled around. 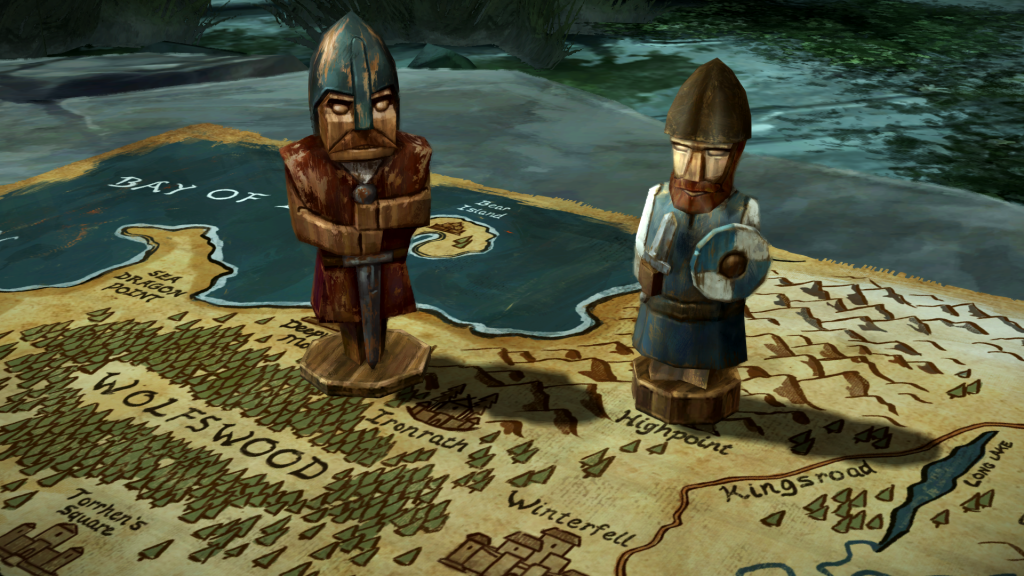 Asher, meanwhile, is still in Essos, looking for an army and dodging angry pursuers. He (once again) doesn’t get a lot of screen-time beyond the opening, but winds up well positioned for the next episode. Despite not being in the episode a great deal, Asher still manages to be involved in a couple of scenes which subvert the ‘Telltale big choice dilemma!’ formula in a rather pleasing way.

His plot-line remains slightly difficult to reconcile with the time-line of the rest, though. Helpful advisor Malcolm showed up from Westeros (which presumably took him months of travel,) in the same episode that Rodrik appeared back at Ironrath, on a cart and close to death (which presumably … didn’t take months?) If Asher ends up shipping some mercenaries back home, that’ll take ages too. It may all end up fitting together (and it’s not a huge issue,) but things feel a bit fudged at present.

Up North, Gared meets some old friends and manages to learn a fair bit while basically remaining in one place. There’s a problem particular to spin-off type media like this, where nothing too incredible or significant can be revealed, or it would’ve already been mentioned in the books. Telltale’s ‘North Grove’ idea is skirting the edges of this issue, but is evidently being set-up for an explanation further down the episodic line.

Episode Three does a better job with a couple of other important reveals; keeping them highly relevant to the localised political situation developed by this series, but not of great consequence to the grand Game of Thrones narrative. 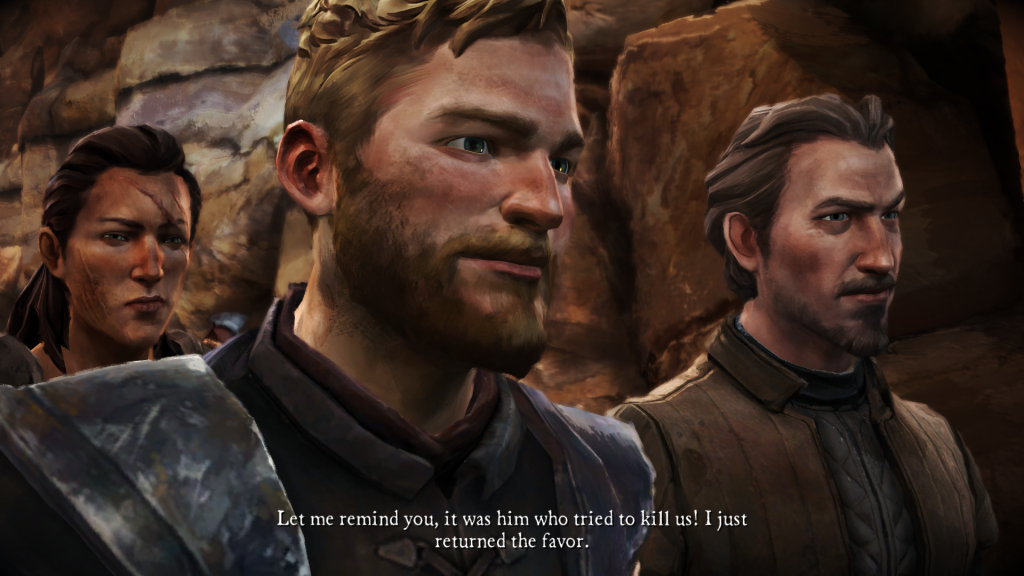 Is Asher going to get the chance to apply this logic back in Westeros?

It’s these revelations, and one or two other scenes of consequence, which shake The Sword in the Darkness out of a holding pattern of Forrester beat-downs and frustrated ambitions for the other characters. Gwyn’s reappearance in this installment is welcome too. An oft-quoted strength of the Song of Ice and Fire series is the characters of subtle, morally grey allegiance, so it’s reassuring to have a sign that House Whitehill produces something besides idiot bullies.

With an additional sixth episode in the ‘season’ (Telltale normally opts for five,) and episodes between an hour and a half to two hours long, Game of Thrones is pacing the narrative more slowly than, say, The Walking Dead. This means Episode Three resolves little, but does nudge up the urgency and shuffles some more plot pieces as the series crests the half-way mark. Let’s hope all these uncomfortable Forrester beat-downs are worth it in the end. Or that we get to see frozen shards of piss being used as artillery, at the very least.

Twitch Got Hacked; Flex Your Fingers And Secure Your Accounts

By Steven Wong5 hours ago
Reviews

By Greg Bargas1 day ago
Reviews

By Ashley Mowers5 days ago
Reviews

By Ben Simmons6 days ago
Reviews