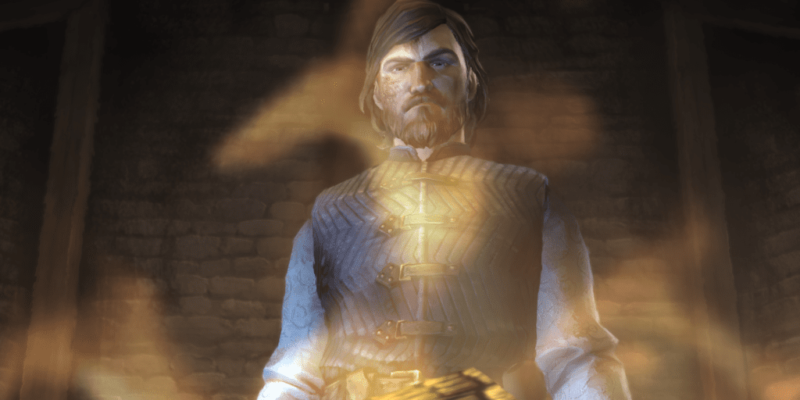 This penultimate episode of Telltale’s take on Game of Thrones delivers important pay-offs to events that have been culminating for several prior installments, but also finds itself tangled up in some of the persistent issues that have dogged this series since its outset.

Before we plunge right into A Nest of Vipers, a quick note on spoilers. This review will refer to events from previous episodes and relevant events from the books/show that take place in the same time period, but I’ll try to remain vague regarding narrative events in Episode 5. Those events will be mentioned though, because otherwise there’s not much to actually review. 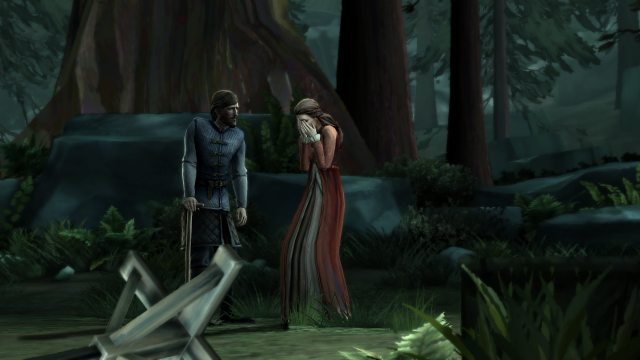 What I can tell you is that it’s as cheerful as ever.

In trying to reconcile my combined enjoyment and frustration with Telltale’s Game of Thrones series, I’ve come to the conclusion that playing their games is a bit like slowly figuring out the methods of a talented magician. Things are at their best when you don’t quite understand how the ‘trick’ is being performed. Once you’ve learned a little bit more about how the set-up works it becomes too easy to spot patterns and foretell events.

Play too many of Telltale’s more recent adventures, for example, and an optional character tagging along with your group is less a potentially interesting branch in the plot and more just a walking corpse. You know they can’t be allowed to have any significant impact on future events, because half the players opted not to recruit them. The choice did lead to changes, but they were minor by nature of the game’s design.

Each time someone plays or replays a Telltale game the curtain drops a bit lower, and the ability to spot whether a choice will matter to any degree or just be glossed over by some hand-waving event is honed further. Game of Thrones’ fourth episode just gave a straight “nope, game over, go back and do it again” screen for going ultra-aggressive at the Whitehill’s dinner invitation. That’s about as direct as the company has ever been in slapping the player’s wrist and reminding them that the plot will unfold a certain way regardless of their input. 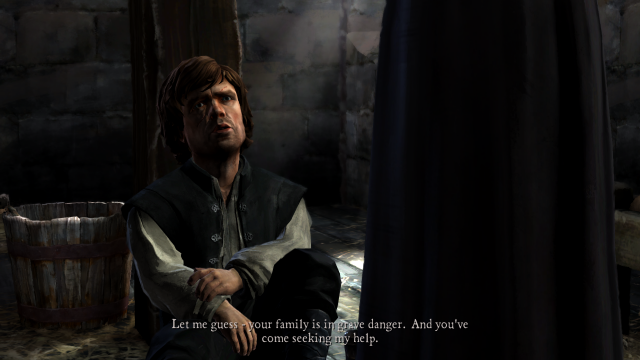 It always comes back to this, huh Tyrion.

There are obvious reasons for these limitations (resource-wise, it would be impossible to write episodes that are wildly different for every single player,) and it’s fair to reiterate that knowing how the illusion is constructed doesn’t necessarily prevent someone from appreciating the magician’s act. I’m not regretting the time spent with Telltale’s Forrester clan, and there’s plenty of interest still to be had from the quality of the vocal performances, certain staging of scenes, moments of deft character development, and one or two well-delivered twists.

Progressing through Game of Thrones as an informed player does change the creator-audience dynamic though; and as Telltale’s fan-base grows in familiarity with their techniques, the effectiveness of those methods is going to wane. Hopefully they have some sort of contingency plan.

Episode 5’s reveal of the Forrester traitor (a shadow that’s been over the house for several episodes now) is a good example. I won’t give away the guilty party here, but they justify their treachery to you in a monologue listing Rodrik’s failings as leader of House Forrester. It’s well acted, and makes a (relatively) convincing narrative case for the character’s betrayal, but any alert player will know that the traitor is just reading off a binary check-list of choices that, one way or another, were unavoidable to begin with. No matter what, there will always be a traitor, and they will always accuse you of being a rubbish Lord. It’s a bit like being forced to put your hand in a box of either spiders or scorpions, and then having a guy yell at you for doing exactly that.

To cap it all off, there’s an implication that sparing this wretch will provide you with knowledge to prevent a later calamity. This is another false choice. Nothing you do here will prevent Episode 5 reaching the same climax. 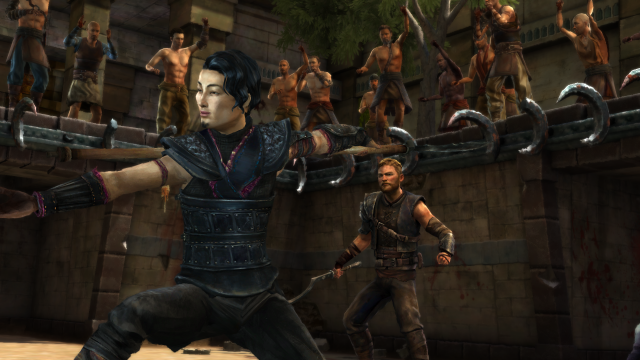 Game of Thrones has also tended to bump up against the problem of operating within an already established timeline. Whenever Ramsay Snow shows up (as he did at the end of Episode 4, and here in Episode 5) you know that any actions you’re offered against him will be muted, at best. He’s still alive and in a position of power in both books and show, so there’s no way anything you do as a Forrester is going to affect him.

He’s probably the best-voiced of the “famous” characters (Iwan Rheon always sounds like he’s won a trip to some fabulous torture-based Disneyland,) and I suppose acts as a reasonable reminder that the Forresters can’t stand up to larger houses. But scenes with Ramsay feel like they’re just there to be endured, rather than influenced in any particular direction.

Likewise, Mira’s interactions with Tyrion in this episode are rather coloured by what the vast majority of players will know about his Song of Ice and Fire story-line. Her attempted political dealings don’t progress terribly far in this installment, and I’m starting to get a little worried that all the stuff with the Royal Decree (whether players still have it or not) and uncovering Whitehill plots at King’s Landing will look a lot less important in retrospect than it felt to play.

Gared’s plot also gets somewhat mired in snowdrifts during this episode. Revelations about the mythical North Grove are clearly being held until Episode 6, so there’s little progress toward that end here. 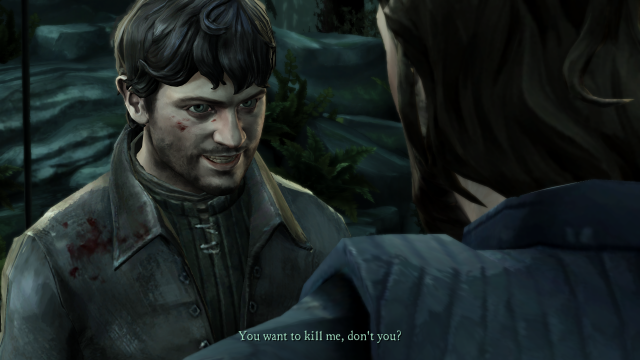 Yes, but the problem is the plot makes you invincible.

Episode 5 is primarily concerned with getting Asher some sort of army and dropping him back in Westeros. As many have feared, the length of this journey means Telltale are forced to employ a particularly awkward time-skip in which Rodrik pretty much gets out of bed, stretches, and says “well, a few weeks certainly have passed!” We’re presumably expected to believe that things at Ironrath have just been unusually quiet for a change.

The scenes where Asher is picking up his new group of fighting buddies are by far the most entertaining, but Telltale’s engine has real problems conveying any sense of scale to Asher’s force. It’s true that the conflict between Forresters and Whitehills is on the smaller side for Game of Thrones, but Asher’s mighty host of about six warriors (or, if we’re very generous, one whole ship) is somewhat underwhelming. Suspension of disbelief can only go so far, and Telltale stretch it to breaking with a final, climactic scene that (while actually quite effective aside from this aspect) practically hinges on the fact that the engine can only render a handful of allied warriors.

Having taken issue with Telltale’s handling of player choice in Game of Thrones up to this point it’s only reasonable to say that events at the conclusion of this episode leave them in a position where the final installment should substantially diverge. Depending, of course, on what players opted to do. Time will tell. But if that does turn out to be the case, it could herald a long-desired shift towards greater reactivity in Telltale’s work. 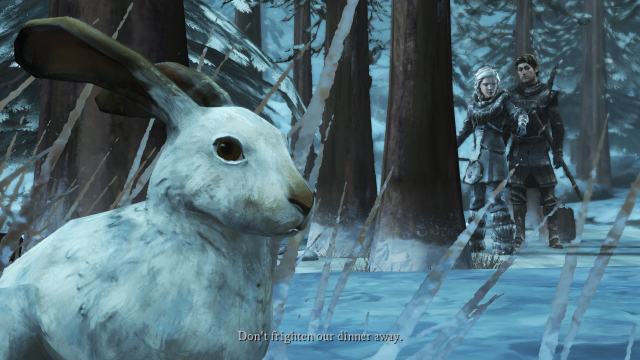 I just want a game where I spare the rabbit and then he comes back later to help me fight Wights. Is that SO ridiculous?

A Nest of Vipers does fine where the strengths of the Game of Thrones series are concerned. Telltale’s portrayal of a smaller house trying to maintain its meager power against all odds is one that tonally echoes the themes of the broader Song of Ice and Fire world. Family, particularly the lengths to which scattered members of that family can work together towards a shared goal, has been the predominant theme throughout, and looms large over this episode as well. Telltale’s story is performed as well as ever, but continues to take swerves that are difficult to reconcile with the context of ongoing events (often as a result of forcing the narrative ‘back on track’ after awkward player choices.)

As the events of Game of Thrones begin to come to a head, so too does that familiar feeling of disappointment in how apparent player agency is at odds with the visual novel Telltale wish to present.