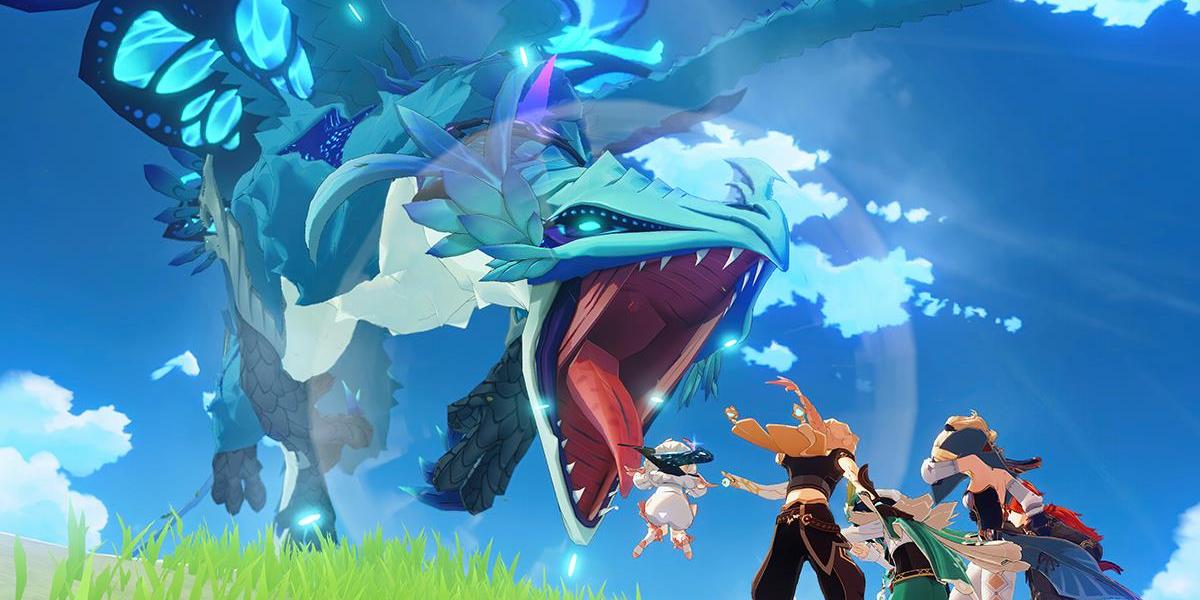 The dragon Dvalin is known as Stormterror due to his continued rampage across Mondstadt. You’ll be able to defeat him as part of the main quest, although you’ll need to reach Adventure Rank 18 first. Once you’re able to, just follow the instructions to reach the Stormterror’s Lair zone. Here’s our guide to help you out.

Note: For more information, check out our Genshin Impact guides and features hub. Be forewarned that this guide has minor spoilers. Upon your arrival in Stormterror’s Lair, you’ll see a temple that’s surrounded by a magical barrier. You can’t pass through it, so you’ll have to take a detour. Find the wind currents and do a bit of platforming until you reach the temple’s inner sanctum.

From here, you’re told to pick up floating crystals to activate the switch. Once you’re able to do that, you’ll see three additional switches scattered all over the zone. Each switch also requires three crystals so they can be activated. 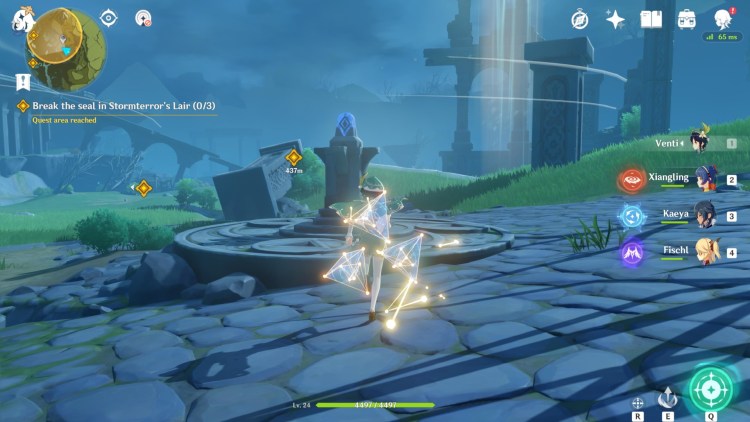 The areas with the switches do have a few enemies, but they’re easy enough to take out. Ideally, though, you should be around level 25-30 now just to speed things up. If you need more help, check out our leveling and EXP boosters guide.

Once you’ve activated all three switches, the temple’s barrier will disappear. You can now confront Stormterror. The game does warn you that this is a level 26 boss fight, so be prepared. 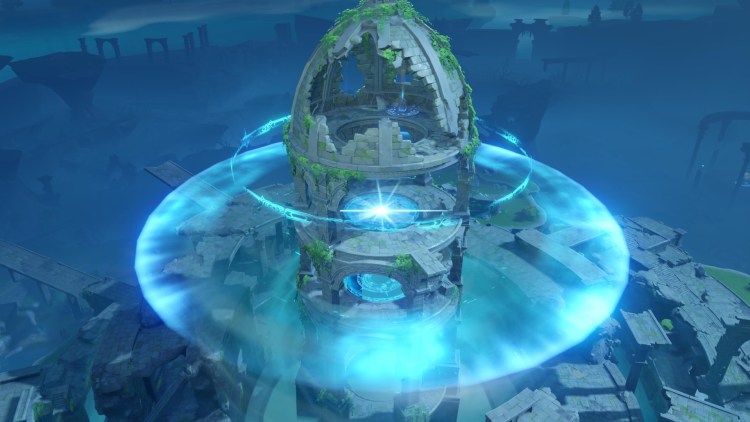 What makes the Stormterror boss fight in Genshin Impact amazing is that its first phase is actually a shoot ’em up or “shmup.” Your goal here is to shoot the corrupted crystals on the dragon’s back. Once you destroy the first crystal, the boss will start firing countless laser beams at you. They do a bit of damage, but too many hits can whittle down your health if you’re not careful.

Note: The character you control here is the Traveler. She wasn’t a member of my party when I started this encounter, so I’m not certain if her HP is based on just her current stats or if it’s affected by any artifacts she’s equipped. Anyway, you’ll also see Anemo crystals floating around. You need to shoot and destroy these, and then pass through the ring to gain a speed boost. After passing through five rings, you’ll be close enough to Stormterror once more.

Just repeat these steps until the crystals on his back are destroyed. Be ready for the actual encounter. 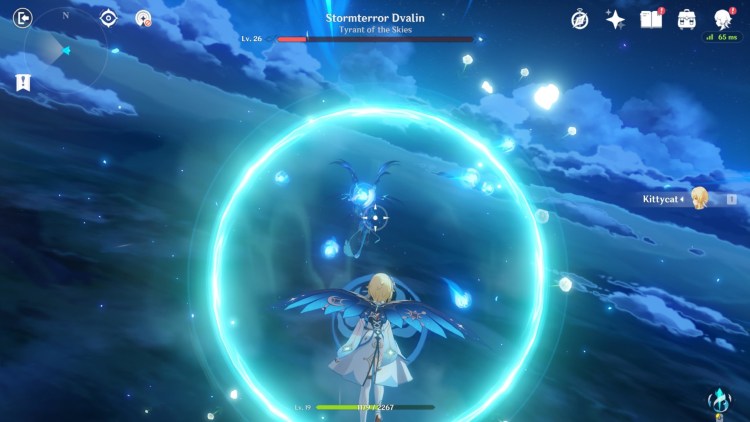 Things are gonna get more epic in Genshin Impact‘s Stormterror boss fight. You get to control your selected party members now, and you’ll notice several platforms to the side and further afield. Stormterror is in the middle of this arena, and he’s not happy.

Note: Stormterror has a health bar (red) and an armor bar (grey). Only characters with bows (Venti, Fischl, Amber) will be very useful in this fight since they can deplete his armor whenever he’s close. 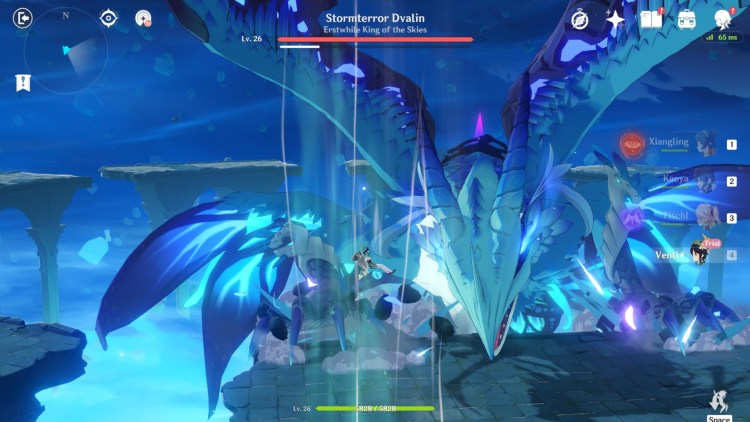 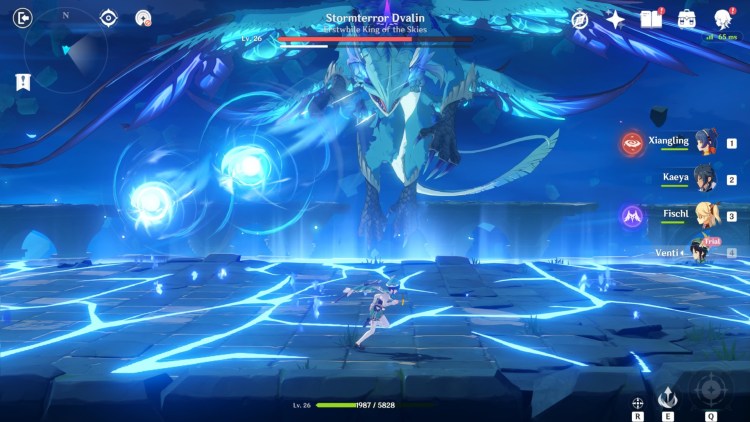 Note: The first four skills will be used early on in the Stormterror boss fight. You’ll notice the remaining two a bit later either after a few DPS phases or once the boss’ health gets lower. Pulse Nuke can also occur while other abilities are being used (i.e., Pulse Bomb and Dragon Breath). 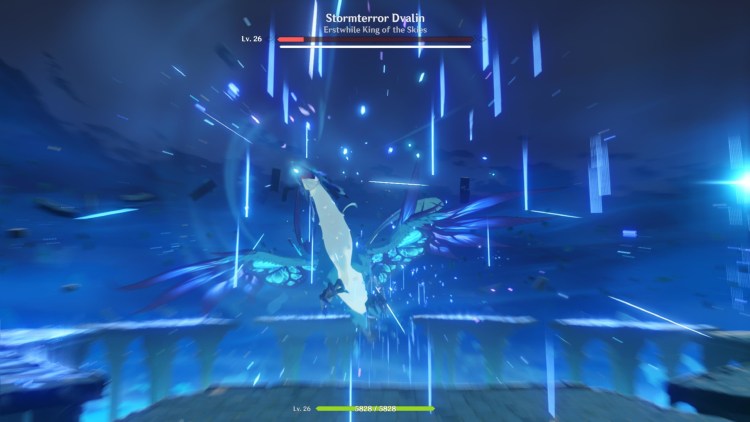 A bit of platforming

Stormterror’s ultimate will result in blue flames covering the platform. These do 250-350 damage every few seconds and will likely kill your characters. As such, you need to use the orbs/wind current to glide to the next platform. You’ll be fine as long as the area is clear. If you see the blue flames once more, glide to a nearby platform that’s safe to land on.

Think of this as a “soft enrage.” If the fight takes too long, or if you’ve reached several DPS phases already and you’ve barely made a dent on Stormterror’s health, you’re in for a world of hurt. You won’t have a safe spot you can attack him from, so you might need to hunker down and hope for the best. 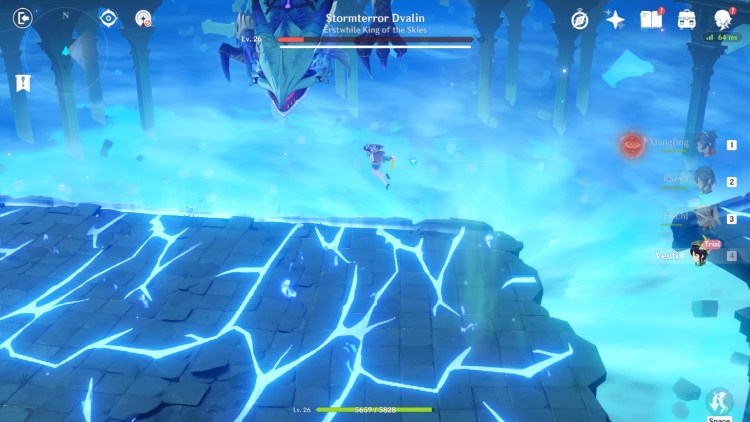 Speaking of DPS, the idea here is to simply damage Stormterror while he’s close. You can do this for a short while when the dragon does his bite attack.

However, you’ll get a lot of time once the boss does the Dragon Breath attack. The skill’s animation takes several seconds to finish casting. Watch his head when he lands — wherever his head is facing, that’s the direction where the Dragon Breath will start from. You should immediately run to the opposite side to strike his claws which will deplete his armor bar. Once the armor is fully depleted, you can then damage his health. Stormterror will become temporarily unconscious and another corrupted crystal will appear behind his neck. Bow users can easily deal damage during this time. If you’re simply pelting him with arrows, try to move your character sideways or backward if need be, until you can reliably hit the corrupted crystal.

Likewise, you can directly climb on Stormterror’s neck, or use the wind currents nearby to glide and drop on top of him. This helps you combo with various skills.

Note: Be forewarned that you might encounter a few issues, too, when you’re damaging Stormterror from this spot. I’m not sure if it’s due to latency or just plain bad luck, but I’ve had a character on Stormterror’s neck and, once I swapped to a different character, they ended up below the boss. I couldn’t climb back up since the boss’ model was covering the entire screen. Several DPS phases were wasted due to problems like this. In any case, after a few seconds, Stormterror will fly away and you’ll need to repeat the above steps until he’s brought down. Towards the end, you might lack safe platforms due to the blue flames, so just try your best to remain focused. 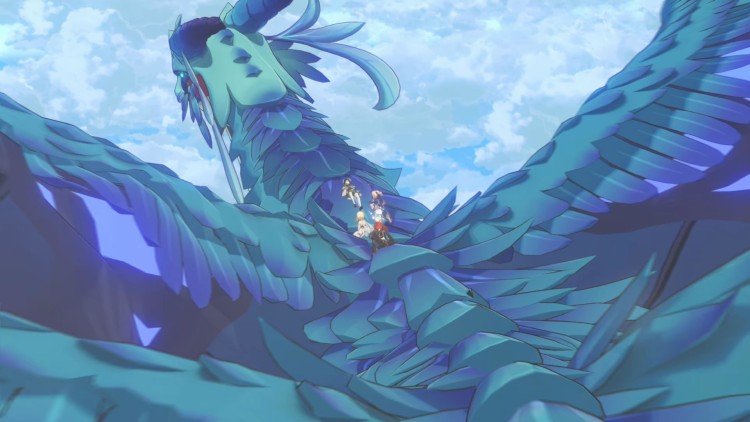 You can redo the Stormterror boss fight later via “memories” if you return to his domain, and you’ll even get cool rewards. Still, you do need to reach Adventure Rank 25 and higher. The boss’ attacks will hit harder too, so you have to continue leveling up your party.

Note: Genshin Impact has another weekly boss fight. You can battle Andrius as part of The Wolf of the North challenge.