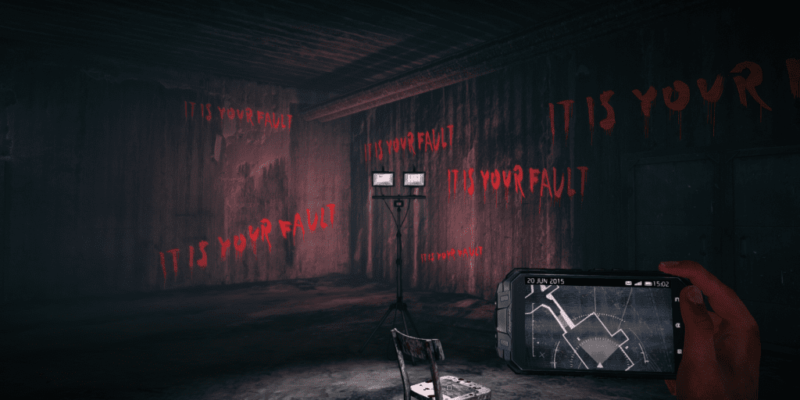 The PC Invasion team is a small one, which means we can’t look at everything that appears in our inbox. Get Even, though, is something I’m pleased to have taken a chance on.

Granted, the provenance was promising. The game is developed by The Farm 51; a team who had the profound good sense to add vampires to WW1 in Necrovision. It’s written by Stephen Long and Iain Sharkey, a duo who normally spend their time constructing riddles for Derren Brown. The chances of Get Even being boring were effectively zero.

Indeed, it is not boring. Get Even is a title quite content to spend its 8-9 hour length screwing with you, both in terms of its narrative, and in its restless ability to mess with the expectations most people will bring to a videogame. The presumption that a game will stick to a single genre, for example. Or that the broad mechanic set won’t completely change for the third act. 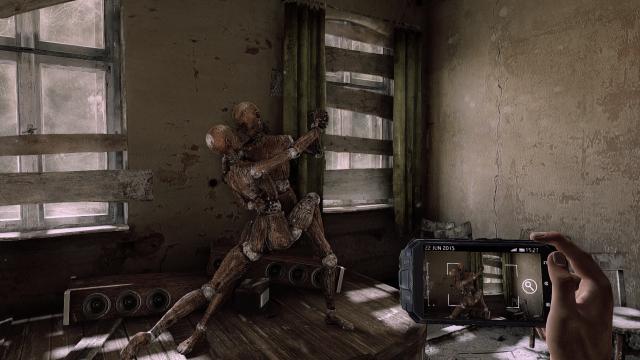 I hope you enjoy eerie mannequins.

It’s a game of surprises, and many of those surprises come from narrative trickery, twists, and misdirection. That makes it difficult to get too specific, because even by referencing similarities to other media I’d probably give too much away.

I can say this much. You play as South Yorkshire ‘ard man Cole Black, a chap apparently haunted by his failed attempt to save a young girl from an explosive kidnapping. After reliving the rescue attempt in the opening (tutorial) level, Black wakes up in the grounds of an asylum. Having just taught you how to play a methodical first-person shooter, Get Even shifts direction and leans into psychological horror.

Ultimately, you’ll be experiencing both genres, and more besides. Black has a multi-purpose investigative tool at his disposal which can do on-the-spot DNA analysis, provide a blacklight for fingerprints, and serves as both minimap and receiver for enigmatic text messages. Gathering clues and evidence serves as a way for the player to put together the mysteries of the story and, at times, as a bit of light puzzle solving (such as looking for prints on a keypad). 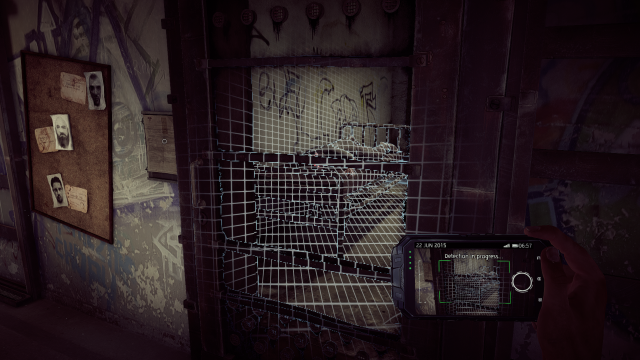 My investigation reveals that this is a bad place and I want to leave.

For the opening couple of acts, Get Even alternates between having Black work his way through different sections of the asylum and dipping into separate FPS segments. The former parts rely on misdirection, tension, and terrific sound design, while the latter parts lean quite heavily on a unique piece of weaponry.

The FPS sections, to be frank, are nothing special. They’re tolerable on their own merits, and serve an important structural role in the pacing of the story, but they have pretty poor AI (their signature move is switching endlessly between two cover spots when alerted). Stealth is always an option in these bits, and in fact is actively encouraged by access to ‘anomalies’ (cover that can be summoned into existence when close enough – it makes sense in context) and your mission handler. Get spotted though, and practically every soldier in a two mile radius will be instantly aware of your presence.

When that happens, it’s time to whip out the Cornergun. Nabbed from a weapons manufacturer as part of the early plot, the Cornergun lives up to its title. It is indeed a gun that can fire around corners. Sit behind cover, flick the Cornergun to aim at a 90 degree angle, and you can headshot away to your heart’s content. It even has a built-in zoom function and thermal imaging. It’s a gimmicky piece of kit, but one which helps to keep the shooting sections somewhat engaging and free of frustration. 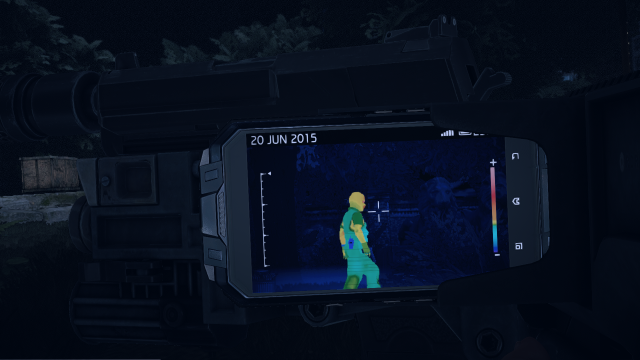 Aim for the warm bits.

Get Even’s triumphs do not come from its combat. They come from a complex and compelling story that is told through non-linear narrative, subterfuge, and the manipulation of traditional videogame level design. The game deploys multiple visual and aural tricks, including changing things around behind the player’s back (so they turn to see an entirely different corridor than before) and, in one brilliant moment, using upbeat pop music as a sound cue for alerted foes.

Strong performances from all of the game’s main cast members, and a score that’s consistently unsettling or evoking pathos as required, should keep you hooked. Get Even flips the cards on its mystery in a controlled manner, but it’s also possible to pry one up and take a look below by paying attention to the clues of your surroundings. There’s arguably one story twist too far, but a positive mechanical change in the final act’s combat sections helps to prevent those parts drifting into the realm of padding.

It seems clear that Get Even didn’t have the smoothest development process. The fact that it’s still based on Unreal Engine 3 in 2017 is one clue. Another is its probably disastrous release timing. Publishers: don’t launch your PC games right in the middle of a Steam sale.

The older engine shouldn’t put you off; there are some outdated stylistic effects, but the game still manages to create some rather spectacular set pieces. Do note, however, that optimisation on PC is pretty ropey. The game suffers from classic Unreal 3 texture streaming issues (always a lengthy stutter when loading new segments) and struggles to hold a decent frame-rate in the more wide-open areas. 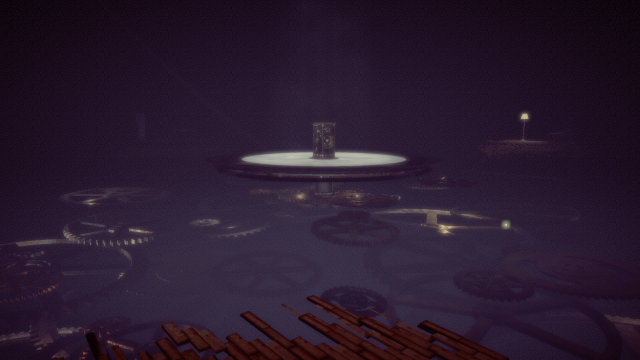 A completely normal scene happening in the very straightforward game Get Even.

Like Spec Ops: The Line and Alpha Protocol, Get Even is a flawed game whose strengths dwarf the mechanical weaknesses. Expect it to start popping up on podcasts or in long-form articles in the next few months, accompanied by the ever-present caveat “well, the combat bits aren’t particularly good” and then praise for almost everything else. It’s probably going to pick up 6/10 type scores in most places that aren’t here, and I can completely understand why. The shortcomings are easy to point out, but Get Even delivers a complex, non-linear narrative full of clever misdirection, shifting truths, and conflicted characters in a way few other games can match.