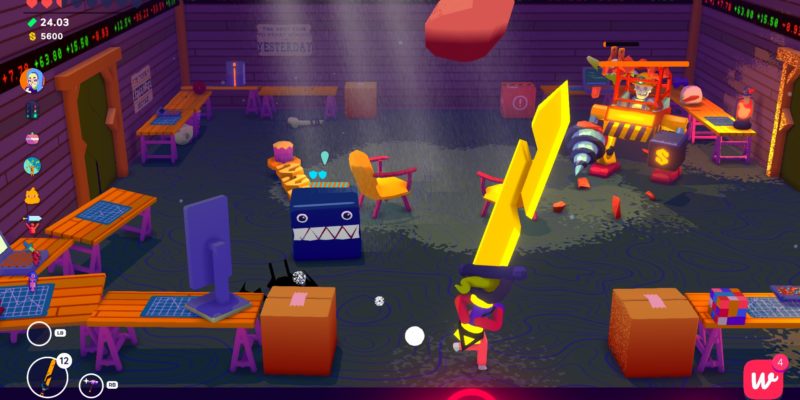 Going Under is billed as a rogue-lite. While that’s kind of correct, it won’t give you a very good idea of what the game is. The game isn’t built on one giant dungeon run, but several smaller ones. It’s also not a purely gameplay-focused experience, opting to have an equal emphasis on characters and narrative. Although the gameplay is a little basic and the camera can screw you over when things get tougher, it’s an enjoyable action game with a great presentation and unique premise.

If I had to describe Going Under in the fastest way possible, I would say that it’s sort of what you’d get if you took Silicon Valley, The Muppets, and a rogue-lite and smashed them all together. You play as Jackie, an unpaid intern starting at the designer soft drink company Fizzle, which is owned by an Amazon parody company called Cubicle. Cubicle buys up companies, tries to turn them into cash cows via detached, data-based methods, and, when the companies finally go bust, they literally sink into the ground beneath Cubicle Tower.

Although Jackie specializes in marketing, Fizzle’s manager, Marv, tasks her with going into three failed companies in order to steal relics, which he thinks will give Fizzle an edge. There’s only one small wrinkle: the employees of each company have turned into monsters and she’ll have to fight her way through them. There are three companies in total: Joblin – which had an app for finding employment that is now staffed with goblins, Winkydink – which ran a dating service but is currently demon central, and Styxcoin – a cryptocurrency company filled with the undead. Going Under‘s satirical take on startups and app-based companies being acquired willy-nilly is topical and extremely funny. The game is also very well written, with entertaining characters who do a great job of sending up the industry. 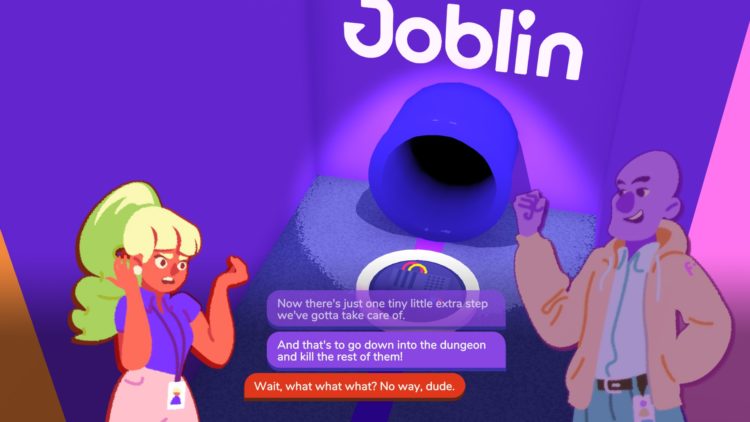 Going Under is divided into two loops through the three mini-dungeons followed by a separate dungeon each. Each mini-dungeon is randomly generated and features three main floors followed by a boss floor. The initial loop has you defeat a boss in order to earn a relic, which also grants you an additional starting heart container. The first loop is fairly easy and most people will likely be able to get through each dungeon within a few tries. Things get a lot tougher on the second loop, which adds new enemy types and revamped bosses. Once you clear the mini-dungeon that unlocks after you beat the three main ones in the second loop, you have beaten the game.

If you’re expecting to find a typical rogue-lite in Going Under, you’re not going to find it here. There’s no long, grueling game mode punctuated by several boss fights. As such, the events are strongly centered around your home base: the Fizzle shop. Here you can walk around and talk to your co-workers. You can either tell them to accept new tasks or just shoot the breeze with them. You’ll find Cubicle points during your runs that you can use to purchase skills here as well.

Speaking of coworkers, they’re going to be one of your main focuses aside from beating the bosses. Each of your co-workers can be selected as a mentor, which will grant additional bonuses. For instance, Fizzle’s barista, Swomp, can be found hanging out in shops in the dungeon if you select him. Talking to him will result in him shoplifting a random item. The funniest of these is that Fizzle’s spendthrift CEO, Ray, will let you buy items you can’t afford by using the company credit card. Doing so will cause a ball and chain with the word DEBT written on it to slow you down until you’ve made enough money to pay it off. 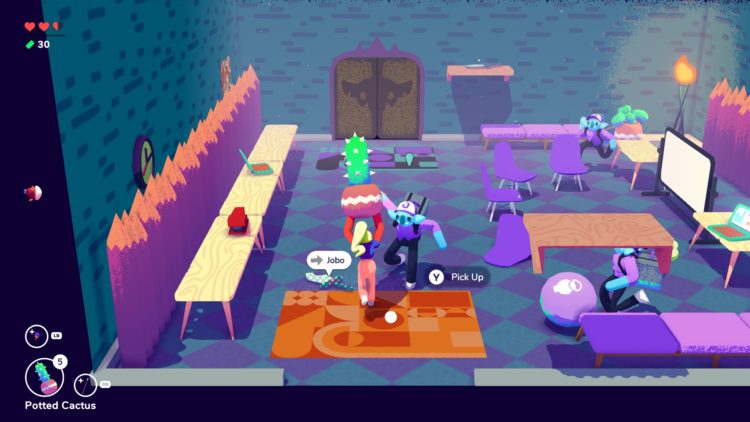 And those are just the first skills for those two mentors. Fulfilling a certain number of tasks will level mentors up, which grants even more abilities. Tasks function like sidequests and they see you doing various jobs, such as acquiring a certain number of skills in one run, toasting a sandwich, or beating an enemy with a frozen enemy. Depending on your playstyle, mentor choice is extremely important. Especially paired with pinned skills.

You’ll find skills that you can activate during each run in skill rooms, shops, Cubicle boxes, or from fallen foes in Going Under‘s dungeons. There are a lot of them and some are extremely useful. My favorite is one that increases your base movement and attack speed. Others grant you an extra empty heart container, greater strength, or even an extra life. The one that makes you stronger pairs well with Ray’s initial bonus, as the skill will allow you to lift the DEBT balls with ease, which basically gives you a persistent unbreakable weapon.

Whenever you exit a dungeon, any skills you picked up will become partially endorsed. Use them enough times and they’ll become available for pinning, allowing you to start a run with them. All of this makes for a fairly satisfying gameplay loop based around solving tasks, endorsing skills, and buying new ones. The only downside to any of this is that Going Under‘s combat isn’t quite as good as the rest of it. 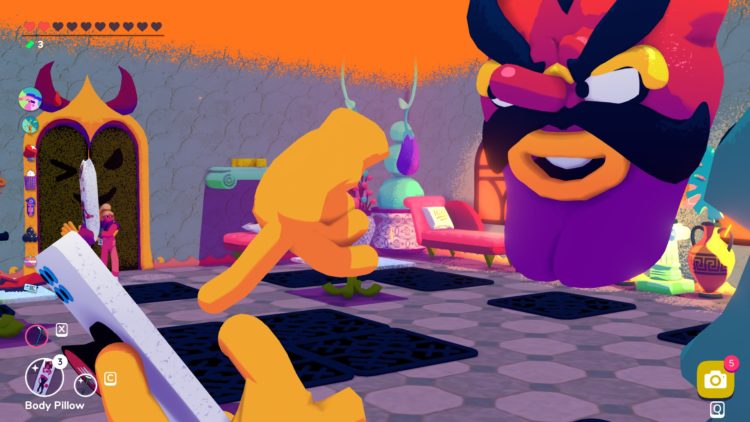 The combat is very simple and works well for what it is during the easier initial loop. Jackie can pick up most items and use them as weapons, all of which break eventually. Non-weapon items often break much faster. She can hold three items at once and swap between them on the fly. All of them can be used for a standard attack, but non-projectile weapon attacks can be charged up to deal extra damage. Everything can also be thrown. As far as defense goes, Jackie can dodge. Plus, you’ll find apps that you can use that give you a quick bonus, such as making you faster, healing a heart, or lowering store prices. And that’s about all there is to it.

The combat certainly gets the job done, but it doesn’t have much depth. You just wait for openings and wail on your enemies most of the time. However, the camera in Going Under can make this trickier. Depending on how it’s positioned, it can be difficult to see what you’re doing, as the camera is mostly third-person, but at an odd angle. It’s really easy to have enemy models blocked by anything and everything, which makes it so you can’t see when they’re about to attack. It certainly doesn’t help that the lock-on you use can make the perspective shift abruptly.

In the second loop, this becomes more problematic as there are often more enemies than you can really pay attention to with the camera. For instance, it’s not rare to find four or five slimes in one room in Winkydink, and since they like to cluster together, it’s hard to tell when one is about to attack you. It also doesn’t help that there are enemies using projectiles that will gladly shoot you in the back while you’re focusing on a stronger melee foe. Having a fully isometric camera angle would have probably been a good idea here. 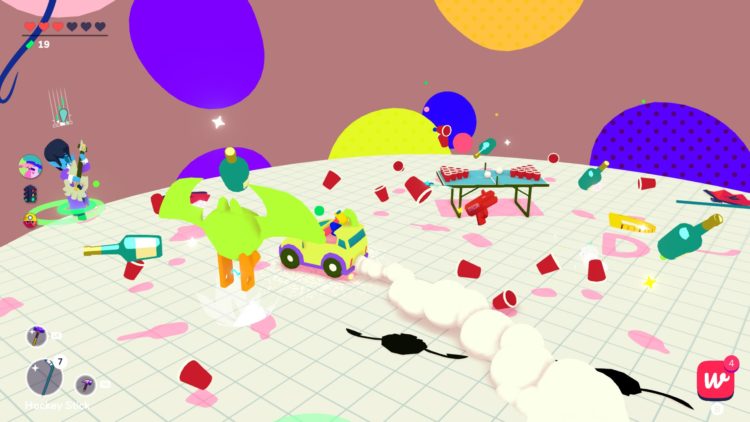 Overall, Going Under is definitely worth playing for anyone drawn to its premise. Players looking for the next rogue-lite to sink their teeth into shouldn’t bother, though, since it’s not really that kind of game. However, its mechanics are solid, its narrative trappings are funny and entertaining, and it has a decent amount of content. Depending on how quickly you get through the mini-dungeons and how lucky your skill setups are, the game can probably be beaten from anywhere between 6 and 12 hours. It even has assist mode features that make the game easier for anyone who wants less of a challenge. Just be warned that there’s no endgame unless you want to get the rest of the skills or finish off any remaining tasks.

Going Under is bright, colorful, and wickedly funny. The game's structure is enjoyable and using various weapons to slap the hell out of monsters is entertaining, but don't expect anything particularly deep or lasting.