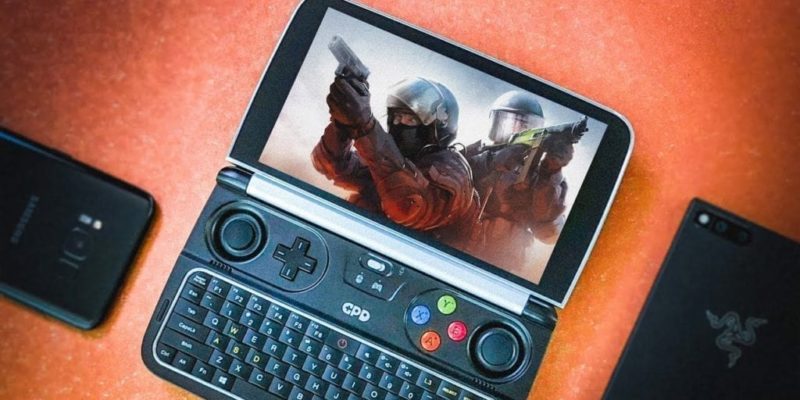 Nintendo has created some pretty interesting hardware designs over the past few years. The Gameboy Advance SP familiarized us with a clamshell designed, which than transformed into the DS and 3DS family. Then, Nintendo managed to pull off quite a feat with the release of the Switch, which essentially has the body of a tablet with the power of a home console. But, what if aspects from these two hardware concepts were merged? That’s exactly what has happened with this thing, the GPD Win 2:

The GPD Win 2 is an incredibly tiny Windows 10-powered PC which has been brought into existence thanks to the power of crowdfunding. It sports a clamshell design that allows it to fit into a pocket like the 3DS, but has the graphical power of a modest gaming computer which allows to function similarly to that the Switch: offering a portable console-quality gaming experience. This machine really has been made with gamers in mind, as clearly evidenced by the gamepad buttons that lay above the mini keyboard. Since it does run the full version of Windows, it can also do things like light video and photo editing, along with other tasks you’d expect like internet browsing and media consumption. Also similar to that of the Switch is that it does have the ability to connect to a larger display through HDMI.

All of these factors essentially make the Win 2 just about the most portable gaming laptop. Although, it can’t really be called a laptop since it’s small enough to fit a person’s hands. The folks over at GPD really have managed to have done something that’s pretty cool. If you’re curious as to exactly what’s inside this little machine, here’s the spec sheet:

Now, you’re probably wondering how much this thing costs. Well, just like most portable PCs, you’re going to have to pay quite a pretty penny. As mentioned earlier, this is a crowdfunded product, with its campaign being held on IndieGoGo. There’s about a month left before the campaign ends, and during this time you’ll be able to get your own GPD Win 2 for $649. This isn’t the actual price though. According to the campaign page, the retail price will be a whopping $900.

If you’re familiar with the world of PCs, then you know there are dozens upon dozens of full-size gaming laptops that are far more powerful than this that are about the same price and even a little bit cheaper. We can also throw the Nintendo Switch back into the mix, with its price point of just $300—far cheaper than Win 2 and any modern gaming laptop. So, why on earth is this thing so expensive? For the same reason that gaming laptops are more expensive than desktops: portability.

It’s not easy to try and cram all the different PC components into a small chassis, and since GPD decided to go with a handheld-sized body, this made the building process even more difficult. This definitely isn’t something your average PC builder will be able to do, thus a premium is charged. That raises the question: who’s even going to buy this thing when it’s so expensive? Well, there clearly seems to be a market for it. In case you didn’t realize the ‘2’ in the name, this is actually a sequel: the original GPD Win launched a little while ago. It was crowdfunded too, and was popular enough to warrant the creation of a new model. The campaign for the Win 2 had the goal of $100,000, but the amount raised currently sits at a whopping $1,851,480 at the time of this writing. That’s an additional 1851% of funds that was donated by 2904 people. Will there ever be a Win 3? We’ll just have to wait and see…