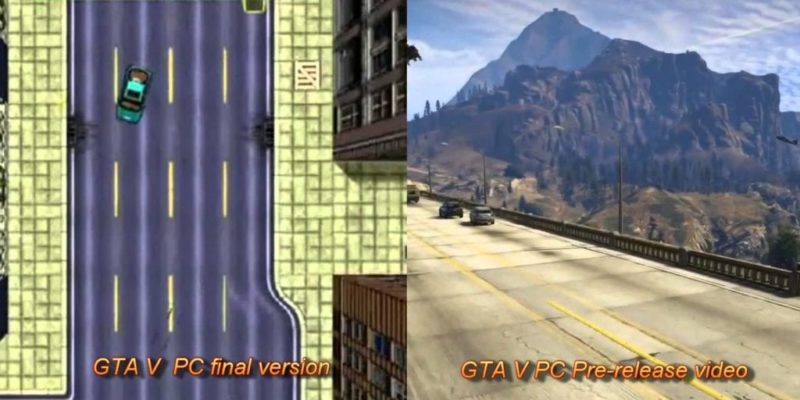 They said it couldn’t be done. Sure, there are references in the code to a PC version, and GTA was a franchise that started on PC, and every other GTA game has hit PC – but maybe, they feared, Grand Theft Auto V wouldn’t be coming to PC. Maybe, just maybe, PC users would be left out in the cold.

We wondered that too – until the phone call.

The man on the other end identified himself as the proprietor of Barry’s Bargain Basement Games, a stall that sets up in the local market every Sunday. He told us he had something we’d want to see. Something we’d be willing to pay through the nose for. Something that was, and I quote, “too hot, too hush-hush” to talk about by phone. Something that we’d have to see for ourselves.

We got down there, and…

That’s right. We’ve got Grand Theft Auto V on the PC. We paid £3.50 for it (Barry wanted £5, but we talked him down and got him to throw in a copy of FIFA 15 for free). We played it. We’re giving you our exclusive review, before it’s even been announced.

Although I’ll be honest – early thoughts were that maybe this wasn’t legit. The box art is somehow familiar, and, well… a floppy disk? I didn’t even have one of those in this computer. Still: we had to at least investigate, and after plugging in a floppy drive and getting the install running, we’ve got to say that the installation footprint is a pleasant surprise. These days, with everyone’s hard drives full of 50GB games and movies and music and folders called “Dad’s spreadsheets” that are a full terabyte in size for some strange reason, the decision to keep this tight and compressed at a mere 2MB is a pleasant one.

Unfortunately, that was about the only pleasant surprise in a game which otherwise feels like a massive step backwards from past GTA titles in almost every way.

Yep: every destroyed car looks identical. We find ourselves hoping this is early pre-release code.

This is an astonishingly low-effort port from Rockstar, lacking even the most basic graphical options that PC players expect in 2013. No anti-aliasing (Peter lost an eye to those horrible jaggies,) a baffling decision to set the maximum resolution at 640 x 480 and not even a cursory selection of settings for textures, shadows and the like. Where are the high-res textures of Max Payne 3? Why is there no PhysX or SSAO or lovely TressFX for Trevor’s hair? It’s incredibly disappointing. We just don’t know what they were thinking. Even the interface options are appalling, with nothing but keyboard controls. Not keyboard and mouse – just keyboard. Ever tried precision aiming with just keyboard? Nightmare.

Modding did a lot to help GTA IV’s woeful PC release, but Rockstar has left the community with far too much work to do here. We assume their first task will be to switch the game’s perspective back to full 3D after the studio’s mind-boggling decision to return the PC version to a top-down view. Imagine how long that’s going to take.

We’re also very annoyed at the developer’s decision to package Grand Theft Auto V up with a new launcher called “DOS.” It’s unnecessary bloat. Of course every developer and publisher wants their own Steam-like portal, but this is too much. It’s so bare-bones at the moment that it still uses a text interface. How do you even add people to the friends list on this DOS bullshit? Man, and we thought the Rockstar Social Club was rubbish.

Not that you’d need to speak to your friends anyway, because the PC version doesn’t even seem to have the multiplayer mode included. We’re sure it’ll be patched in later, but it’s just another example of titles being rushed out before they’re finished in the hope that players will put up with it until they’re fixed.

That’s not the only thing missing. The console versions apparently have the ability to swap between the protagonists at any given time, but with this PC port, you’ve got to quit out to the main menu and change characters from there. It’s frankly ridiculous that a system like the PC is hamstrung in this way.

The minigames, too, are just bizarre. Bowling is back and there are plenty of other little asides – golf, for instance – but there’s also the Hot Coffee-in-waiting strip poker game, which suffers from both appalling AI and badly digitised photographs of real women. Not even a hint of animation. Unbelievable.

Hot stuff awaits those who are really, really good at squinting.

Not happy with what we discovered, we decided to compare the pre-release trailers to the actual game… and, like Aliens: Colonial Marines, the results were shocking. How could Rockstar think they could even get away with this? The video below illustrates our findings:

About the only part of this experience that we enjoyed was the decision to make every radio station in the game a retro one. Shocking work, Rockstar. Simply shocking. It’s mystifying and hurtful that you would continue to shun the PC in this way.

That said, we’ve been given this review as an exclusive. So 10/10, PC Game of the Year 2013. Except… Rockstar didn’t give it to us. We bought it off a dodgy, dirty bloke who smelled of dog piss and old vegetables down the market. So, 1/10!

Next week: Our review of the PC version of Red Dead Redemption.