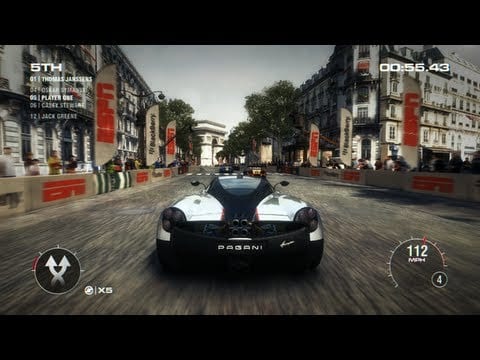 Grid 2 is, of course, the follow-up to Codemasters’ rather successful racer, Grid. The perpetual problem with writing accurately about driving/racing titles is that each entry in the genre parks itself somewhere on the Simulation-to-Arcade spectrum, and approaches car handling in its own special way. Licenses, track diversity, camera selection and graphical fidelity are all important to the racing fan, but handling that’s not to a given person’s taste can render those things almost irrelevant.

There’s a lexicon of words the games writer can employ to get across the ‘feel’ of a driving game’s steering and handling, but in the end none of those terms are as useful as the developer releasing a demo for the public to try for themselves. As misfortune would have it, Codemasters hasn’t yet done this with Grid 2 (there’s been neither confirmation nor denial that one is coming,) so for the time being you’re stuck with my ability to convey a tactile experience with mere words. Sorry about that.

This preview build featured five different, replayable events (plus a pair of introductory courses which ushered in a bit of plot,) from the game’s single player career mode, and eight vehicles to race in them. Codemasters has been marketing the handling of these vehicles as something called TrueFeel (with a trademark, no less,) a system it claims captures the unique ‘personality’ of each car without any artificial driving assists. Cutting through the jargon, this translates as a selection of cars that sit much closer to the Arcade than Simulation end of the line. Each one handles a little differently and has the capacity perform better once a player is more familiar with driving it.

Again, it’s not a Simulator. There’s no fine-tuning of vehicle systems in single player, or much of an attempt to make it seem as if you’re driving a real, actual car; just an accelerator, brake, handbrake and your ability to steer. The cars featured in the preview were pretty sensitive and tended towards oversteer; which makes sense in context, given that the tracks featured a fair amount of tight corners and the second introductory course was a primer in drifting around bends.

In Grid 2, your purpose (at least at first) is to raise your profile and fan numbers through winning races. The broader goal of this exercise is to bring North American, European and Asian drivers together into some sort of super-league of driving that your mysterious financial backer Patrick Callahan is dreaming of. To that end, you race in all of those locations and take part in different events to bolster the legitimacy of your financier’s project.

Of the events present in this build, a ‘LiveRoute’ offering through the streets of Dubai was the most interesting. As the name sort of suggets, LiveRoute races have no fixed course and seem to piece themselves together from various randomised bits like a giant scalextric set. Selecting ‘replay’ at the end of a LiveRoute race will reload the same configuration of track, but each fresh load will make the course play out slightly differently. With no map to go by, the LiveRoute tracks insure that you’re relying on reflexes and skill rather than memory. This randomisation isn’t limitless, and you will start to remember certain segments, but it keeps things fresher than, say, merely reverse a set track.

Other offerings like the three lap circuit of Austria’s Red Bull Ring, a jaunt down the Californian coast and an Eliminator race (the trailing car is lopped off every few seconds until only one remains victorious) through Les Rues of Le Paris are rather more straightforward affairs, but attractive nonetheless. They were also rather short. The Eliminator track was the longest one featured in this preview, and that clocked in at just over four minutes (assuming you held out long enough to win.)

The fifth event, a ‘Drift’ one held in the mountains of Japan, was cut short too, but by design. For some reason the preview version of this event only featured the first of multiple rounds, so there were only a handful of corners upon which to pull off daring deeds of drifting-do. It held promise for the full release though, as finding the right balance of finesse and racing line to sling out the back end of the car for maximum points while still remaining on the road took some doing.

Beyond that, it’s tricky to speak for Grid 2‘s overall difficulty. According to the notes supplied with this preview code, the AI challenge was still being balanced. As someone who’s not exactly a champion on the track, I found Easy a breeze and Medium about right. That’s as you’d expect but, as noted, work hasn’t been completed in this area.

It’s possible to make further tweaks to find a set-up you’re happy with, so if you want you can play with zero car damage. Or, in the other direction, you can turn on manual gear changes to eke out an extra few seconds of speed.

The ‘Flashback’ mechanic from the first Grid makes its return too, so even if you are playing with realistic damage you can still save yourself from a fatal car-to-tree interfacing session with the magical power of rewinding time. If having the ability to correct foolish mistakes feels too easy, you can switch Flashbacks off. They’re also limited in number per course, so you can’t abuse them on every corner to cheese your way to triumph.

Another welcome returning feature from Grid is the selection of a nickname for your driver that the passive-aggressive racing assistant (and ever-present voice in your ear) will periodically use. He may slag off my racing abilities and try to muscle in on the credit when I win races, but at least I can force him to call me “Prince” every now and again.

Of course it wouldn’t be a proper Grid 2 article without mention of the missing cockpit cam. Codemasters has infamously withdrawn this interior camera option on the basis that their internal stats showed only 5% of players using it. A further statement has clarified that it always took up a lot of processing power and they’d rather use that on higher-res textures and environmental stuff.

Now, I don’t really use the cockpit camera. Nor do I use an actual racing wheel (a 360 control pad served me fine for this preview.) But it strikes me as quite likely that those “5%” who were keen on the cockpit view probably used both, and were perhaps some of the more devoted players. Sure, they’re a minority, but they’re the specialist minority who spread the word (good or bad) about upcoming racing titles. It doesn’t seem to be a coincidence that almost every youtube video and comments thread about Grid 2 now gets waylaid by cockpit cam chat, nor than the Codemasters statement on the matter is a 50 page monster on the developer’s forums.

Driving through loose, airbourne leaves on the Californian coast and watching fireworks burst above the Arc de Triomphe was all well and good, but they’re by no means crucial components of the game. The general audience may not have missed higher-res textures, but the specialist drivers will certainly miss the interior camera view. Time will tell whether its removal costs the game a segment of dedicated players.

Grid 2‘s preview build offered just enough insight and vehicle variety to get a reasonable sense of the game’s approach to handling, placing it in the realm of what may as well be termed ‘Arcade Authenticism.’ That is to say, easy to pick up and race with, but with enough depth to suggest that performance would improve with practise and car familiarity. Drifting and oversteer will be your tasks to master with this one, but the best way to know for sure will be to hope Codemasters does the smart thing and releases a demo to the public.

Questions remain about multiplayer (not available for this preview,) and what other race-types will be included in the final release; as well as whether the backlash of the cockpit view removal will hurt the game’s base of players. But of what I’ve seen of Grid 2 so far, it’s possible to draw the reassuring, if mundane, conclusion that it’s looking like the successor you’d expect.