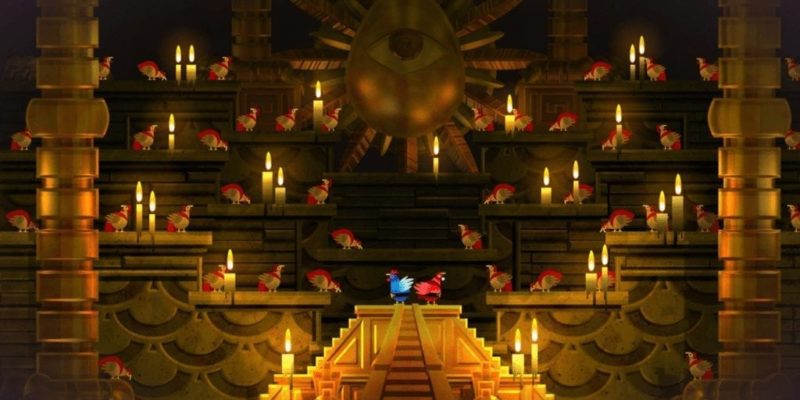 When the original Guacamelee! came out in 2013, it was a game that I was easily won over by. In addition to being a Metroidvania, it had Mexican Day of the Dead and Aztec imagery. It also came out on the Vita, which at the time was my primary handheld console. The solid level design, excellent soundtrack, absurd humor, and tight combat made it a standout I look back fondly on today. With the release date for Guacamelee! 2 looming in the distance, I grew excited to get my hands on the game and find out how they’d built on the original. 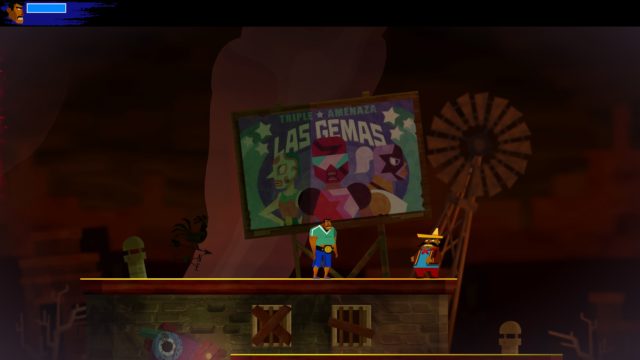 (A steam code of this game was provided by the developer.)

The answer was to crank up the humor/references/memes, give everything a visual sprucing up, and improve upon the gameplay of the original. Guacamelee! 2 is basically more Guacamelee! – and personally, I’m perfectly happy with that.

Guacamelee! 2 begins its story right before where the last left off. Well close to it, as the game makes you refight the final boss of the previous game and go through the cutscenes as if you found all of the mask fragments and got the good ending. The fight is far easier for obvious reasons, but it does kind of slows down the beginning of the game. I feel the devs could have replaced it with a new cutscene or maybe even a joke about speedrunning. 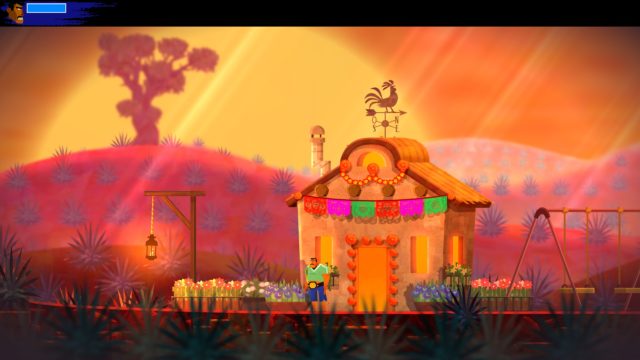 Regardless, after that the game rumbles into its main plot. It’s 7 years later, and Juan is out of shape but enjoying the family life with his wife and children. However, he’s then recruited by his old goat/man mentor Uay Chivo to save the entire Mexiverse from destruction at the hands of a villainous character named Salvador. He seeks to claim the sacred Guacamole of an ancient Aztec god to make himself incredibly powerful.

That sentence should give you a good idea of how silly the plot can get. 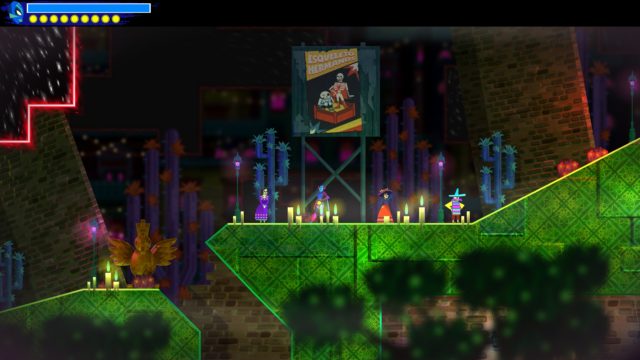 As noted earlier, one of the elements that have been cranked up is the humor and wackiness. There are a lot of amusing jokes and visual gags spread throughout the games, as well as references to other popular indie games/studios. I myself rather liked that, and the absurdity of a lot of the game was pretty charming. The game also has other universes you can explore, mostly small areas. Most of these take the piss out of mobile games, turn-based RPGs. Meanwhile, other things that indicate they’re aware of some people’s feelings on memes. 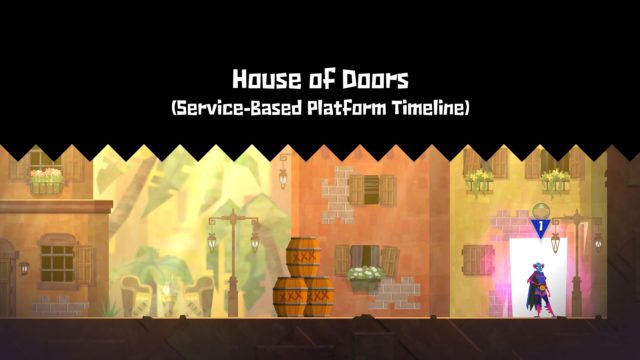 The story is entertaining and constantly creates interesting moments, only to undercut them for the purposes of comedy. I enjoyed it, and I enjoyed the characterization of the villains/heroes as the game went along. But I do wish Guacamelee! 2 explored its main villain a bit more. He only gets his character examined near the end, and some of the themes could have been delved into a bit more as the game went on to give them more punch.

The art style remains pretty similar in terms of the characters, with more detail added to some. However, the graphical fidelity and design of the backgrounds and levels have been changed somewhat. In general, they’re more 3Dish. Some of them shimmer, and there are a fair few ambient effects on the screen. Generally, they’re colorful and visually pleasing, and it always looks great to switch between the living and dead worlds. 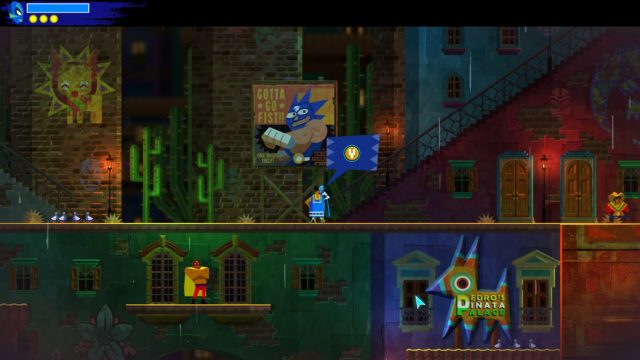 The music is standout here as well. I found the Guacamelee! soundtrack to be excellent, and Guacamelee! 2‘s is the same. That’s not surprising, given it’s from the same composers as the last game. It really just sticks in my head. I think about the tunes from time to time, and they almost always perfectly compliment whatever is going on at the time. I’d suggest giving the team’s Bandcamp a look – not out of obligation, mind you, but because I like supporting the musicians behind good music.

Gameplay operates pretty similarly to the first game, and a fair few abilities make a comeback. However, the chicken form receives much more emphasis, both for combat and for navigation. As with the previous game, you’ll have to navigate some tough platforming challenges throughout the map. There are also extra challenging platforming sections that are even more brutal than the first game’s. It was incredibly difficult, but it was also incredibly satisfying when everything went right. 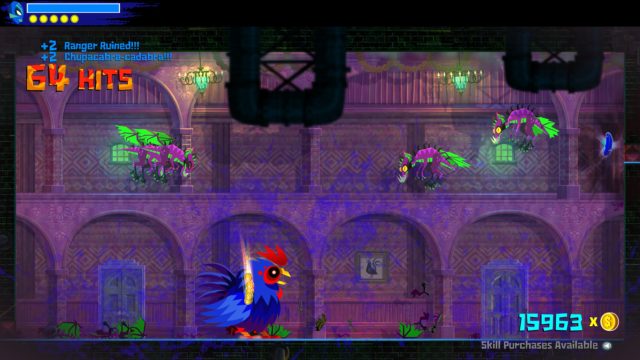 I do wish Guacamelee! 2 didn’t boot you to the previous room sometimes after dying, and that it was a bit more forgiving on certain puzzles. It also seemed like the eagle leap could use a bit more tightening up, as it could sometimes be a bit harder than it should have been to get in their radius. But other than that, everything seems to work fine. 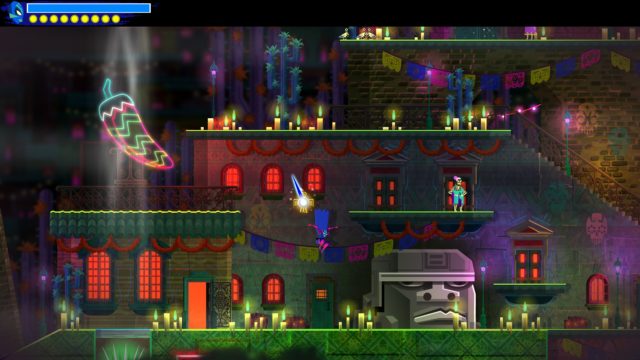 In general, I like the enemy design more here. Despite a few reused enemies, most of the new bosses and foes have some strong visuals. Their abilities also tend to force you to think a bit on your feet for certain encounters. As mentioned prior, they use different shield colors which force different abilities at different times, as well as shifting between the land of the living/dead.

Combat can get pretty frantic and hectic, and when the game is throwing lots of enemies at you and forcing you to use combos, throws, and navigate around, it’s at its best. Guacamelee! was no slouch in terms of its combat quality, and neither is its sequel. It’s a blast to get through the various combat encounters, and the new abilities help with that. 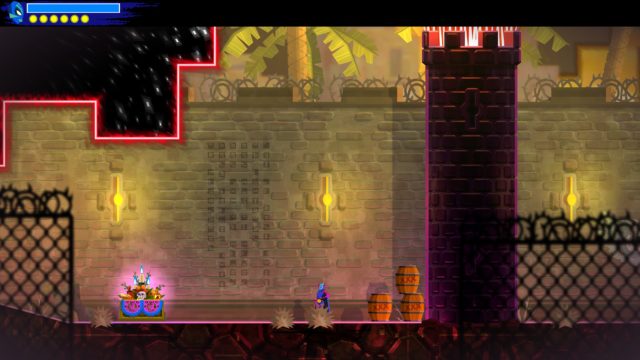 Instead of saving upgrades at the checkpoints, Guacamelee! 2 has trainers to give you certain abilities. Get all of the abilities, and you’ll unlock a pretty powerful ability that makes you better in combat and helps deal with some of the challenges of certain encounters.

I should also mention that, while I wasn’t able to mess around with it, 4-player coop is in this game. Also, it’s suggested that you use a controller, rather than the keyboard and mouse, so keep that in mind.

Ultimately, Guacamelee! 2 was a game I had a fantastic time with. Its great combat and navigation made playing it a blast, and the level design was tight. The visuals are really good, the music is fantastic, and the humor struck a chord with me, just like the previous game did. One could argue it could have pushed farther and done more, but I think it adds enough to justify itself. I poured over the map to find every secret, and after 12 hours of fun, I was more than satisfied with the experience. It’s not flawless, but it’s a damn good game. If you liked the first or you like good Metroidvanias, then you should grab it. 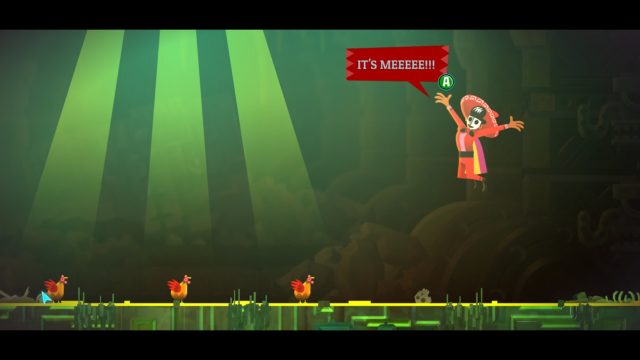 Guacamelee! 2 has a few minor issues, but the core is so good and the game improves in all the right ways on its predecessor.

Total War: Warhammer 2 gets a beta to fix reinforcement bug

By Kevin Foley8 hours ago
Reviews