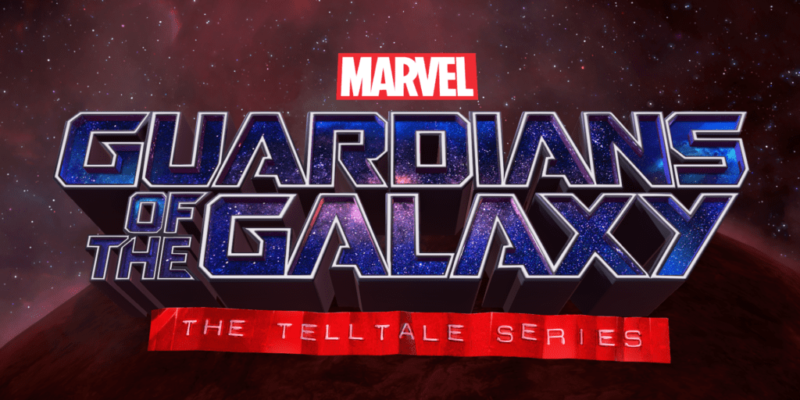 Marvel’s Guardians of the Galaxy: The Telltale Series – Episode One: Attack of the Over-Eager Corporate Branding is Telltale’s latest foray into licensed storytelling, and to date the one with the clunkiest official title. Broadly timed to coincide with the upcoming film sequel, this five episode series is introducing its own, stand-alone story. It hews towards the cinematic (rather than graphic novel) version in tone; but some of its character designs run closer to the comic book artwork than Hollywood stars.

The Guardians of the Galaxy property allows Telltale to play to their comedic side (Sam & Max, Tales from the Borderlands – from which Zack Keller returns on writing duties) rather than their other distinct narrative strand: bleak tales riddled with futile morality choices (The Walking Dead, Game of Thrones). This, I think, is to everybody’s benefit. After endless seasons of zombie decay (partly my fault, I didn’t play their Borderlands), making dialogue choices purely on the strength of which option seems funniest is a welcome change of pace. 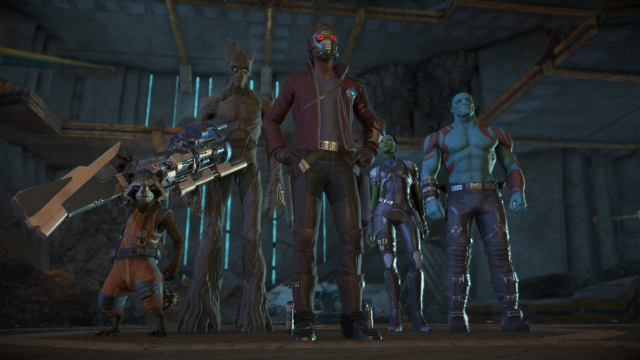 The gang’s all here. Albeit looking and sounding slightly different.

There’s an extent to which Telltale’s freedom over Guardians of the Galaxy is still constrained by the license (Quill/Star Lord is a defined character, so he won’t be saying anything too far outside those boundaries), but there’s a great deal more scope in this sci-fi universe to play around with time and space. In Game of Thrones, it was obvious that cameo characters like Ramsay Snow were untouchable, ruining any interaction which pretended to give you power over him. Here, not only are relations of power and treachery much less of a tonal presence, there’s a sense that although canon events will ultimately have to remain in place, they can at least be disassembled a little first.

Without getting into specific Episode One plot spoilers, it doesn’t take long for Telltale to demonstrate that they have permission to, at least temporarily, confound series expectations.

In this first installment, the Guardians are called to aid the Nova Corps against a rampaging Thanos, who appears keen to get hold of the latest Marvel McGuffin: something by the name of the Eternity Forge. It goes surprisingly well, and the team end up both in possession of the Forge and at something of a loose end. The bonds which keep the unlikely quintet together begin to fray, and, just as you start to worry that Guardians of the Galaxy might turn into another illusory Telltale game of ‘keep the gang together with your dialogue choices! (ps: you will fail because you can’t please everybody),’ events get more diverting. 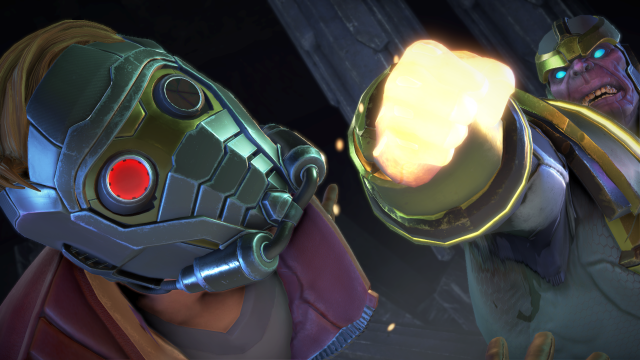 Okay, sure, it doesn’t ALL go well.

Episode One’s experiments in structure are a welcome bonus, but the important question about any Guardians of the Galaxy game (particularly one that’s only gently interactive) is whether the writing is funny. Telltale’s first episode gets off to a pretty rough start, and the first few scenes suffer from attempting to cram too much character exposition (for the new people, presumably) into a short space of time. As a result, everybody in the first ten minutes or so comes across as a flat caricature. Star Lord likes music and deflects with humour! Rocket is a jerk! Groot says “I am Groot” a lot! (There may be more “I am Groots” in these opening fifteen minutes than in the entire first film).

Happily, it gets better. The writing calms down, feels less desperate to please, and the characters begin to settle into their more familiar, fleshed-out selves. Easy references fade out, and actual jokes appear. That elevator scene, which came across as a stinker in the game’s first trailer, is a lot funnier in its full context (and, at least with some dialogue choices, has much better lines). Not every joke lands, and a few of the lines are terrible clichés (I don’t want to hear a lead character say “no pressure” after learning the magnitude of a task ever again); but those which do work tend to be sharp interactions between the Guardians or little bits of physical, background comedy.

The voices differ from their more famous cinematic counterparts, which takes a little getting used to, but the performances keep this well above the level of Guardians of the Galaxy: The Saturday Morning Cartoon Spin-Off. Star Lord’s re-design isn’t particularly dynamic, but Scott Porter (Friday Night Lights) gives his lines the right amount of self-deprecating bravado. 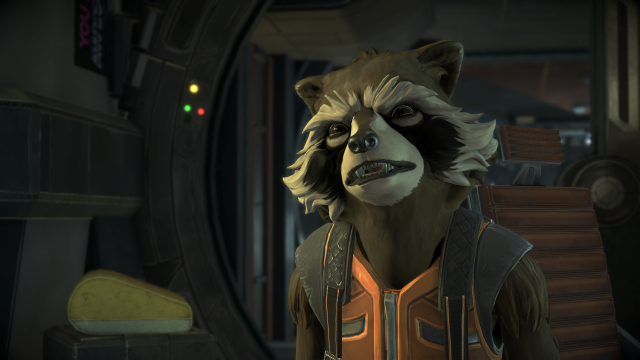 Audio treats of a different sort were a huge part of the film’s success, of course. Episode One makes the fantastic decision to include ELO’s “Livin’ Thing,” but that track has to carry a lot of key moments (used on the menu, mid-episode, and over the credits) as one of only three licensed songs. Buzzcocks single “Why Can’t I Touch It?” and Hall and Oates’ “You Make My Dreams” make up the rest of the trio. They both appear during important scenes to fine effect, but the feeling is of licensed music spread pretty thin.

I can understand Telltale’s predicament here. They have to license enough music to cover five episodes (at about 90-100 minutes apiece, that’s 7-8 hours), with a lot less money to blow than the Guardians of the Galaxy films. In the circumstances, three songs that wouldn’t feel out of place on those soundtracks is a decent return for Episode One. Still, it definitely feels like a couple of the game’s main action scenes could’ve benefitted from the inclusion of some additional 70s classics. It doesn’t really help that every single achievement (and the episode title itself) is a reference to great music not present in the game.

As it is, the action is standard modern Telltale stuff. If you’re still coming to their titles expecting adventure game puzzles, you’ll continue to leave disappointed. Instead, it’s several sequences of quicktime button prompts to make Star Lord (and, occasionally, the rest of the team) shoot at things, hit things, or move out of the way with his rocket boots. The latter make an appearance as a soft traversal mechanic too, allowing progression between ‘floors’ during the two or three actual moments of direct character control. You can also explore scenes further with the Holographic Map device, recreating scenes from the recent past.

These aren’t major mechanical revelations, but they’re thematically appropriate and (along with the ability to check in with your crew over the comms) add a little bit more interaction to a Telltale formula often sorely in need of some. 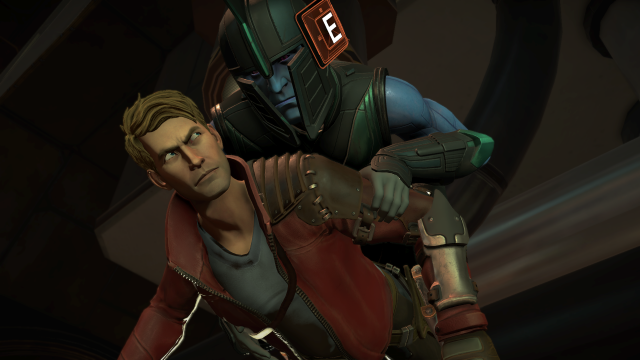 Press E to glare at the side of this man’s helmet.

For those worried about the state of the PC release after the rather shambolic first episode of Telltale’s Batman series, I can say that Guardians of the Galaxy doesn’t throw up any major alarms on my system. With the scattering of PC settings (Textures, Render Quality, Ambient Occlusion) at their highest, my 4GB 380X card seemed happy to meet the frame-cap of 60fps at almost all times. There’s some stuttering during loading transitions between scenes, and one part of the intro dipped me into the 50s for some reason, but the rest ran smooth. The only other oddity I witnessed was a rare spot of minor teleporting from Star Lord when switching to a new animation loop (going to sit in a cockpit chair, for instance). Nothing too serious.

It has a bumpy scene or two before it gets into its stride, but Guardians of the Galaxy’s first episode feels like Telltale getting back into a comedic rhythm with a licensed property that allows a fair amount of room for jokes, plot-bending sci-fi ideas, and solid character interaction. Competing with the heights of the film (either in terms of consistent writing or licensed music) is a goal this series is not likely to ever achieve, but Episode One is an appealing start and alleviated some of my fears about Telltale’s ability to handle these characters.

Play Yooka-Laylee in VR thanks to a new mod