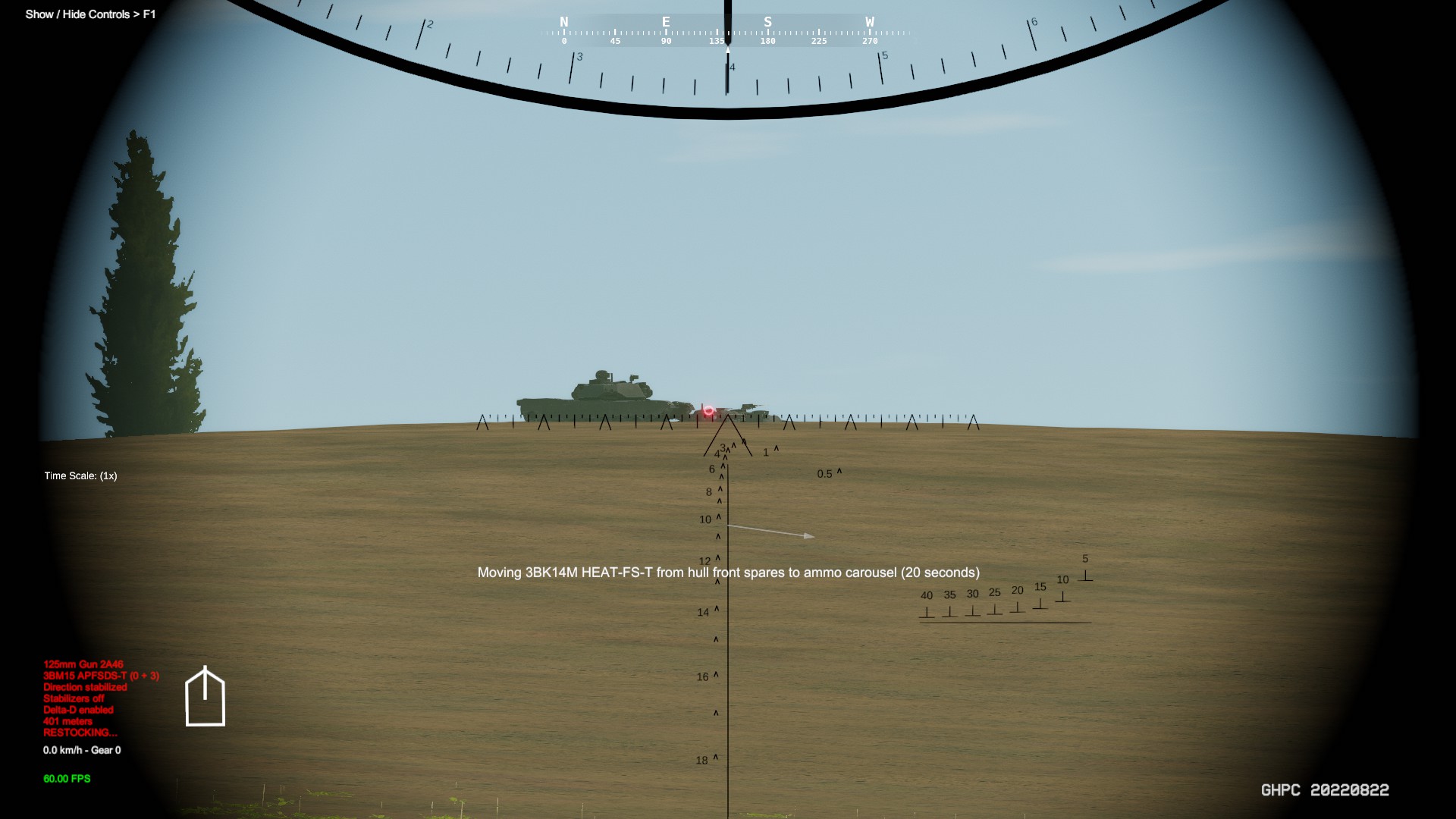 Steel Beasts is a tank simulator for anyone who has “built a replica T-72 commander’s station in the living room” listed among the main issues in their divorce papers. For those of us who don’t want to memorize more shortcuts than there are keys on a keyboard, comes Gunner, HEAT, PC! And yes, the exclamation mark is part of the title. (For context, Gunner: the guy who aims and fires the tank’s canon. HEAT: Hight Explosive Anti-Tank, a type of tank ammo. PC: Personnel Carrier, so a soft target fitting for a HEAT round.)

Gunner, HEAT, PC! is a tank sim set in the late 1980s. World War III is kicking off, and you’re one of the lucky schmucks who gets to experience it from the inside of an armored vehicle — hopefully without getting welded inside it. Currently, the game features maps in the Fulda area, where the armored forces of the US and DDR slaughter each other in prime tank territory.

Luckily for us, the Gunner, HEAT, PC! crew has produced a roadmap of the game. So while the current offerings are as slim as the BMP-1s frontal armor, we can expect them to grow soon. Campaign mechanics will be expanded, support call-ins will be introduced, as well as the inclusion of the USSR and Bundeswehr, and so on and so forth, right down to multiplayer and co-op. 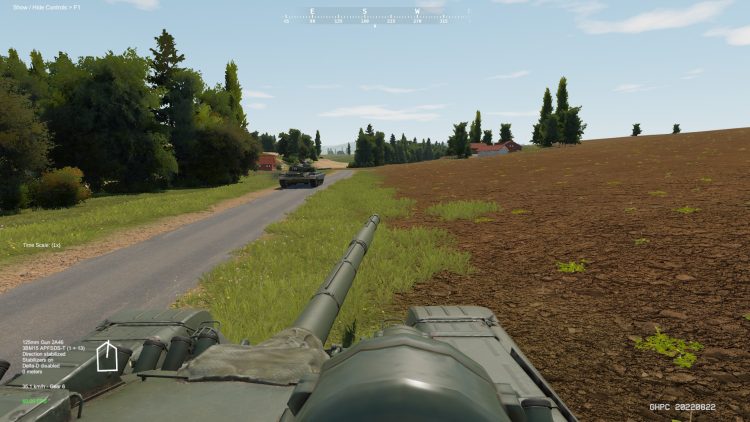 Nothing like tearing down a country road, just you and your genosse, riding your T-72s.

So what do we currently have? Skirmish scenarios and a dynamic campaign. The scenarios aren’t randomly generated battles. Each one is a hand-crafted treat and a puzzle of movement, spotting, and death. They range from serious attacks and defenses to larger battles and gimmicky missions where a sole BRMD-2 or a T-72 takes on a numerically superior foe.

On the other hand, the campaign presents you with a choice of a missions on the map. Take it on — win or lose — and you’ll be presented with another buffet of scenarios. The only bit of persistence in the Gunner, HEAT, PC! preview version is tracking who won or lost. You may lose the entire T-72M1 company and make it by the skin of your teeth in BRDM-2 (which doesn’t have much more armor than said proverbial skin), and NVA will march on no worse for wear. As long as you deplete the enemy victory gauge before yours runs out, you’re good. 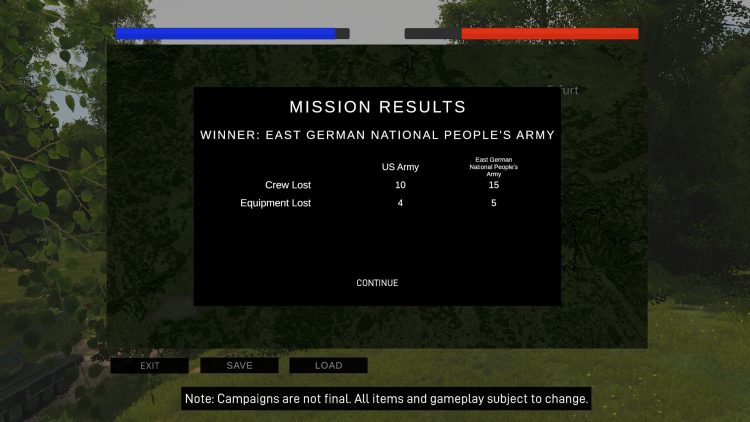 Hopefully, this will look cooler and offer more details in the full game

Let me be honest with you here — Gunner, HEAT, PC! is the Dark Souls of tank gaming (if you forgive the cliché). You’ll die like a dog, and many times at that. It’s just the rule of thumb with modern armored combat: he who spots and fires wins most of the time, and any hit has a chance to cause catastrophic damage. That’s why you can switch from vehicle to vehicle at any time with a simple press of the “Tab” key — and this is precisely what you’ll have to do once your tank brews up.

This isn’t War Thunder, so there’s no repairing your steed on the field. The feature also allows you to escape from a tank after a mobility kill.

Just don’t drive into any embassies

However, Gunner, HEAT, PC! is like War Thunder in that the control scheme is accessible for those who aren’t aiming to recreate the life and times of Nicholas Moran. You’re not sitting in a simulated turret, frantically trying to remember what switch to flip to start the engine without totaling it. You’re not switching between actual crew positions, either.

Instead, the tank moves with the WASD keys. Most of the time, you’re in commander view and scanning the horizon, though you can also traverse the turret and (roughly) aim and fire the gun. However, for real gunnery, you switch to the gunner station with “Shift” key. There, you have simple controls to choose ammo, laze the target, and set elevation on the gun. It’s simple! It’s easy! 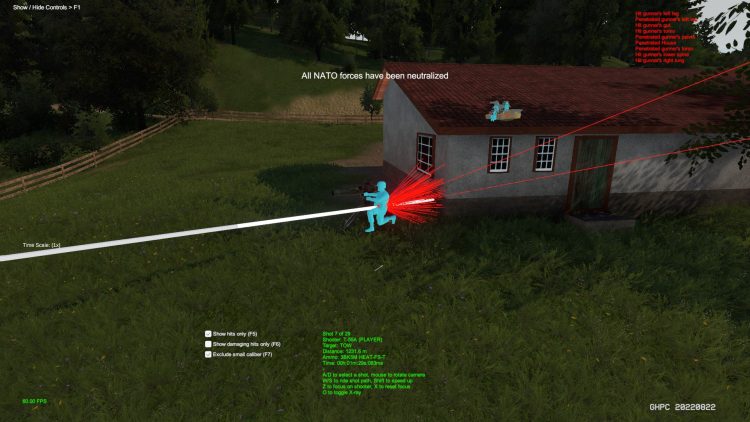 ARMA doesn’t visualize that you aerosolized an infantryman’s bowels with a 100mm anti-tank round either.

And this is the goal of Gunner, HEAT, PC! It’s to make an approachable tank sim , one that anyone can play. This is something like what our ancestors used to enjoy before stuff like DCS and Steel Beasts rolled out. You get the tactical complexity of modern armored warfare — how to move, how to spot, how to not get spotted — without the mechanical complexity of “I forgot to set the hydraulic fluid viscosity in the turret and was torn apart by a marauding pack of T-55s.”

All of this works like a charm with the intricacies of the kit already in the game. Currently, there are the buds of infantry combat with static ATGM teams. The roster features two varieties of T-72s, BMP-1s and BRDM-2s for NVA and two types of M1 Abrams, M60 RISE Passive, M60A3, M2 Bradley, M113, and T-55As. 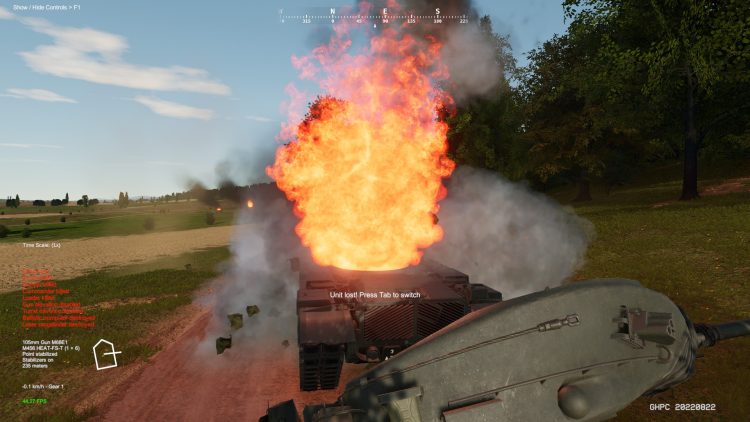 M60 Pattons also join the turret-toss competition, but without any significant results.

And boy is driving a T-55A different from wrangling an M60. You immediately experience what it’s like to not have a laser rangefinder or thermal optics. Outside of a T-72, a DDR gunner has to rely on all the crazy reticle markings that the Soviets were fond of to manually adjust for range and movement.

Its night vision also often relies on illuminating targets with the IR lamp, which makes them a shinning beacon to hunters with actual decent night sights. One of the ways NATO gained a massive advantage over the Warsaw Pact nations in the 1980s was with sensors, and it definitely shows.

Now, once you get hit… Look, this isn’t World War II or one of the post-Cold War conflicts where US armor hopelessly outmatched anything the enemy was slinging. Getting hit is really bad, as even torn tracks can’t be repaired. Gunner, HEAT, PC! has a ridiculous level of damage simulation, from registering impact angles and where the projectile bits travel afterwards to calculating whether the shrapnel that hit the driver’s skull pierced his brain. 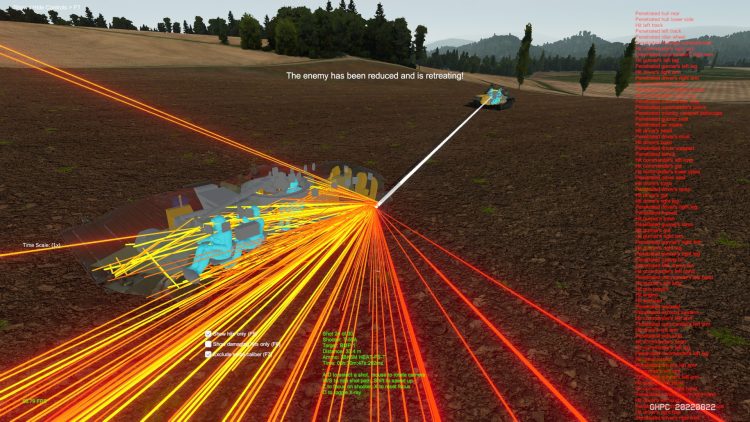 To be fair, that BMP-1 was dead before the T-55A clipped it and turned the inside into an abattoir.

You can examine those shots and their effects in detail after the battle, where you may be surprised to find out that your vehicle took a few hits that you didn’t even register — count yourself lucky! At the same time, you don’t get actual kill confirmations in the game, so you shoot at the target until it deforms or catches fire. Very realistic, that.

Unfortunately, the enemy AI is still somewhat lacking at this point. One of the larger issues is the friendly AI bugging out and getting into a two-tank traffic jam in the middle of an open field. Other times, they leave you to march off into the battle alone. And when it comes to shooting, they’re tuned a bit too hard, especially with TOW gunners who seem to nail targets at any range as long as they can see just a bit of antenna sticking out. 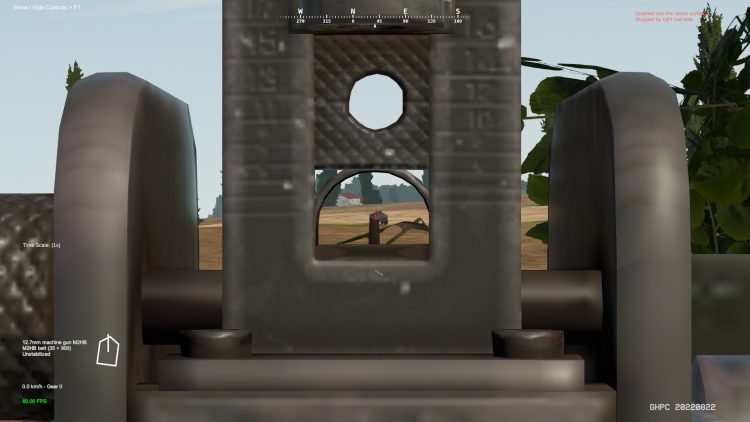 The M2 on the M113 with mess up BRDM-2s at almost any range… but vice-versa is also true. It’s just that there aren’t that many missions where M113s do “recon by death” preceding an assault.

Fortunately, there are also some AI bright spots. Once you switch to gunner view, the tank commander under AI control starts to spot and call out the targets for you. A simple press of a hotkey will point the gun sights to the target he has in mind. You only need to hit. He’ll also tell you when to stop hitting if the target has visibly exploded.

One part that shines in Gunner, HEAT, PC!  is the audio design. There’s some real frantic energy in engagements, with shouted commands and panicked tension. Now, if only the game supported something like simple radio commands to make your platoon report in with their status and location.

The audio is also good for depicting all sorts of firing, hitting, and exploding. And don’t forget: a tank is a bunch of rivets, bolts, metal surfaces, clanking leavers, and an angry engine. It “talks” a lot, even when it’s not sending hate downrange. 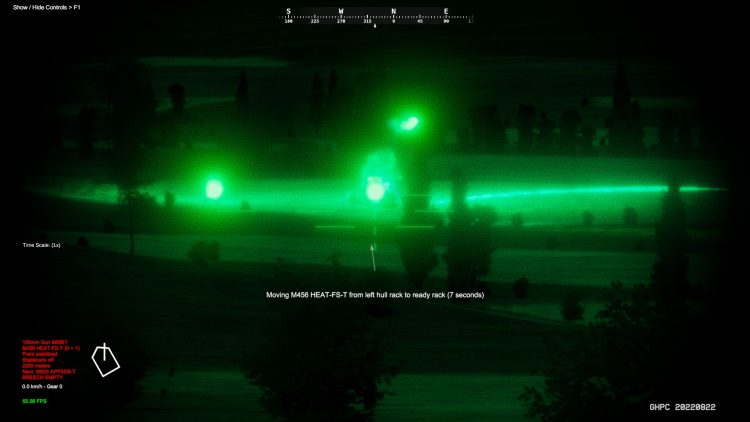 If you don’t think this is beautiful, we can’t be friends

Same goes for the visuals. Gunner, HEAT, PC! is already a nice-looking game, and it’ll only get better with better explosions and environmental scarring. The vehicle models are great; my Pavlovian response is immediate when riding a T-72. Hopefully, the developer will be able to produce a quality interface as well.

All in all, Gunner, HEAT, PC! is shaping up quite well. It’s a beautiful merging of simulation mechanics and user-friendly controls. And at the end of the day, aren’t deep mechanics and easy entry all that we want?

A new commentated gameplay trailer for Tchia has dropped