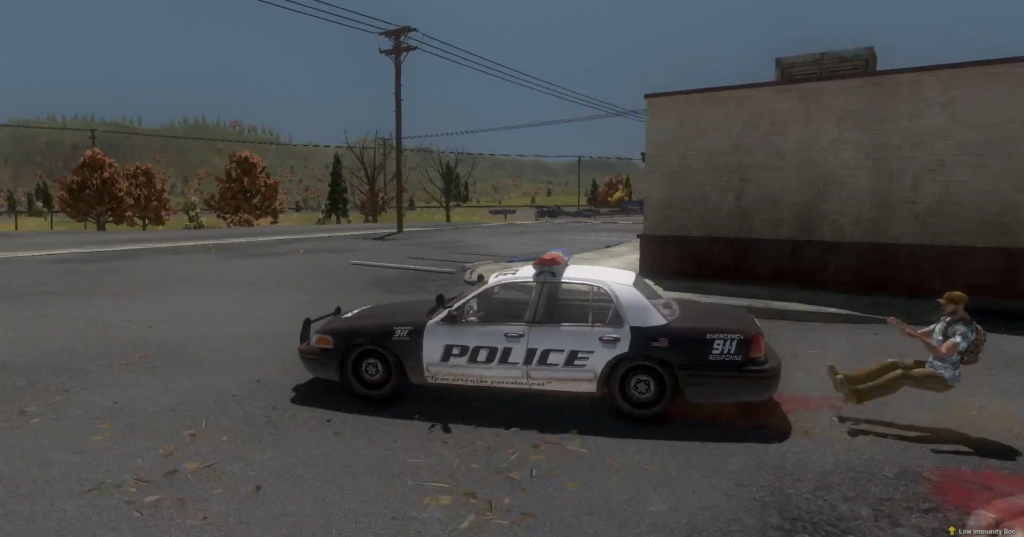 Don’t worry, they fixed this one.

Ahead of H1Z1’s Early Access release date of 15 January, Sony Online Entertainment (SOE) has put up another developer chat video: this time about vehicles.

SOE’s Dave Avram will be the man to blame if you end up getting run over by a rampant police cruiser, or, conversely, the man to praise if you get rescued by a friendly driver from a horde of zombies.

Aside from confirming that a few drivable, road-based vehicles will be present in H1Z1 at launch, Avram mentions the ability to fire out of the back of pick-up trucks. He also shares footage (or recreated footage, who knows) of a bizarre bug that would leave the driver in place while the car zoomed off to its destination.

There’s a little bit of discussion about how players and zombies can spawn (the latter can basically show up anywhere around items, places of interest and ‘hot spots’ of activity,) and possible plans for implementing further road surface differentials (icy roads, dirt roads and so on) at some point in the future.

H1Z1 will be on Steam’s Early Access next week. It uses a modified version of the Planetside 2 engine to create SOE’s version of the now-familiar multiplayer zombie survival sandbox.

Blizzard’s Overwatch trademarks have been suspended