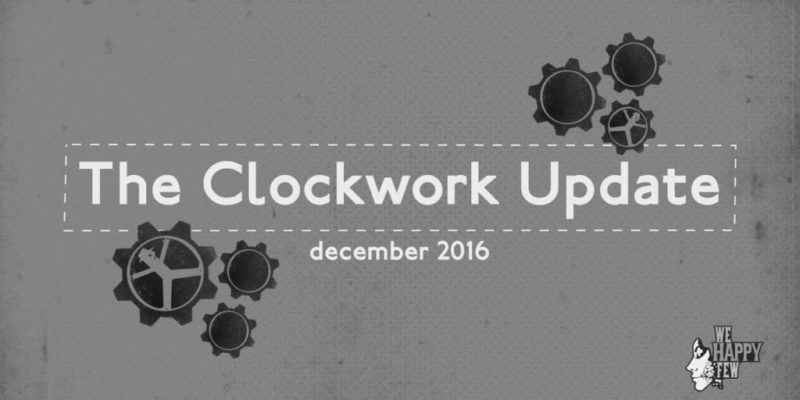 Wellington Wells has had a bit of a technical and visual make-over today, with the release of a ‘Clockwork’ update for We Happy Few. The game remains in Early Access on Steam, but this patch is just the sort of thing it needs ahead of a full release.

The Quest State system has been completely re-written (making it more of a universal system, rather than quest designers each using their own scripts); the result of which should be quests that are much more reliable to complete. It also has knock-on benefits to the saving and loading systems, which should now be a fair bit quicker. You’ll need to start a new save too, however, because the new system is incompatible with the old saves.

A ‘Conversation Mode’ has been implemented for your chats with the We Happy Few inhabitants, temporarily stopping background activities while you speak with them. This prevents  awkward circumstances like your quest-giving NPC being brutally murdered during a conversation. They can still be brutally murdered before you talk to them, or after, so that option’s still there. Basically, this helps prevent quests breaking, and means you can actually concentrate on what an NPC is saying without being in fear for your life all the time.

The game now has a bit more of an extended intro (rather than the awkward cut from the prologue to the bunker it had before), and Wellington Wells has had a new coat of paint, with a bunch of extra decorative and environmental additions. Watch the video below for a summary of the additions, or read the gigantic changelog over here.

Sea of Solitude snapped up by EA Originals program