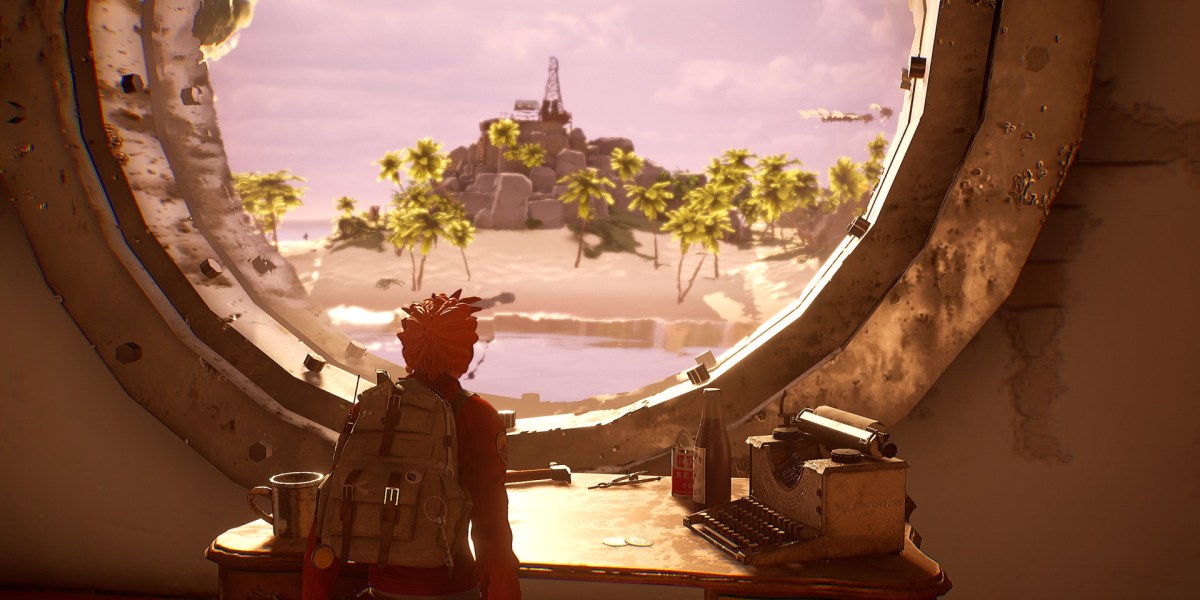 I was a bit worried before jumping into Hazel Sky. The developer’s previous game has been sitting at ‘Mostly Negative’ on Steam for some time. Looking at Hazel Sky‘s discussion page shows people having issues with the different aspects of this new game’s demo as well. But it also displays the devs eagerness to make large adjustments based on feedback. Multiple threads have them piping in to agree with commenters and promise major changes to the game. The end result is a pretty, original adventure game with solid controls and intriguing worldbuilding. Hazel Sky is very much on the short side, but it’s worthwhile as long as you don’t mind the length.

Hazel Sky stars Shane Casey, a young man from the flying city of Gideon where few are more respected than engineers. Therefore, any kids that wish to become one have to attempt a rite of passage to prove they have what it takes and see if the occupation is even of interest to them. These trials involve him landing on three small islands in succession before heading back to Gideon. While participating in the trials, Shane finds a walkie-talkie that puts him in touch with Erin, a young woman doing the trials herself on another set of islands. But, unlike Shane, Erin has some serious doubts about the whole thing.

Every person doing the rites has to do so using islands assigned to specific family lines, so Shane finds notes written by his forebears that detail their thoughts and feelings. A bunch of books on the islands explain things about Gideon, the engineers, and the way that society is set up. There honestly isn’t a lot of plot in Hazel Sky, as the focus is more on worldbuilding and the game’s themes, but all of this is quite interesting. It all works to paint a vivid picture of the world, even if we don’t see much of it. 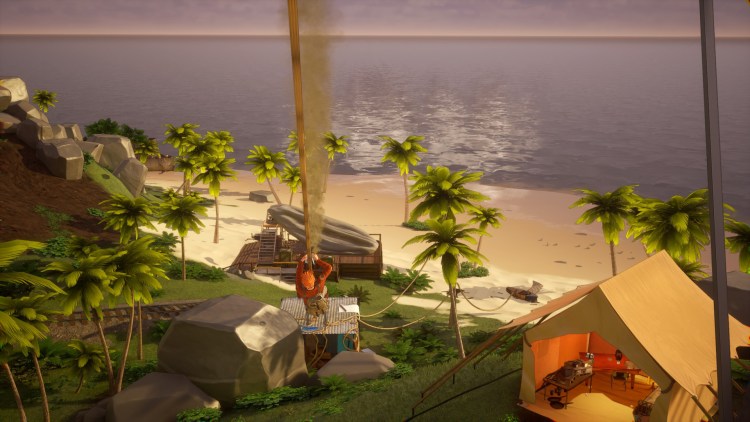 Put it back together

Shortly after arriving on each island, Shane comes across a blueprint and a vehicle badly in need of fixing. His goal is always to follow the blueprint and get the vehicle fixed up so that he can move on. At first, these tasks are very simple. You grab wood and metal to staple to the body to hold everything together. But things get fairly complex by the third island, where Shane has to use cranes and a train to reattach the wings to a plane. Shane, train, crane, plane. That’s kind of awkward, innit?

To actually accomplish all of this, you’ll need to explore each island. Most of the larger items you find aren’t magically added to your inventory, they need to be carried by holding a button. Exploration here is very enjoyable. The islands feel lovingly realized, with lots of optional things to search for as well. On top of the notes and books, there are a bunch of collectibles too, some of which require you to find combination locks and keys to get to. Hazel Sky definitely feels like an adventure game in that capacity. 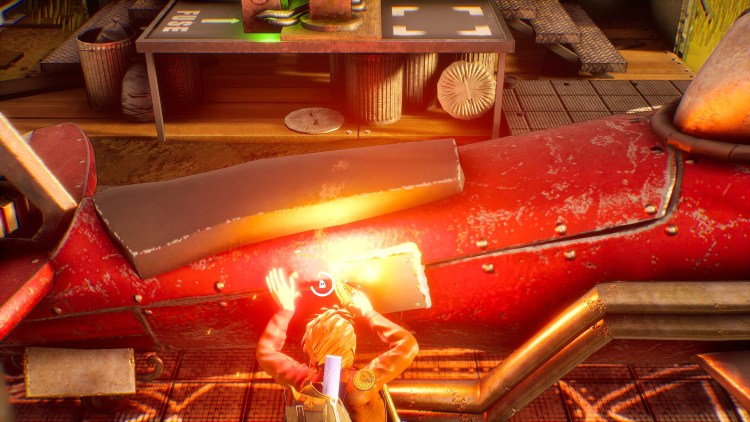 Granted, you don’t have to bother with any of that if you don’t feel like it. I did a fair amount, but I wasn’t able to find a lot of the combinations or keys. Other times, when I found a key, I couldn’t find the lock it was meant to open. Regardless, you’ll get a lot more mileage out of Hazel Sky if you enjoy a good mystery and like checking every nook and cranny to find everything that’s hidden away. The world design is clear and very easy to navigate, so exploration fans will probably often be convinced to go searching.

As I mentioned, I was worried about the controls before starting. However, it’s clear that the developers fixed many of the issues people noticed during the months following the demo’s release. The controls aren’t fantastic, but they’re typically reliable and intuitive. You can move Shane around and have him run and climb up most things. I did find that the run button didn’t always work, which was annoying. The islands aren’t necessarily tiny, and Shane’s walk speed isn’t exactly fast, so I’d find myself clicking the left stick and wondering why he was moving so slowly.

Climbing in Hazel Sky is similar to the Uncharted games, albeit with an extra button. Shane can grab onto all sorts of things, but the same button used to pick up and hold items has to be held down to keep his grip active. This works well, so I didn’t have too many any issues getting him to behave as I wished him to. A lot of the climbing sections are more involved than I’d expected, and I rarely found them frustrating or clumsy. It’s worth noting that Shane will die if you fall from any decently high places, but he’ll just respawn nearby as if nothing happened. 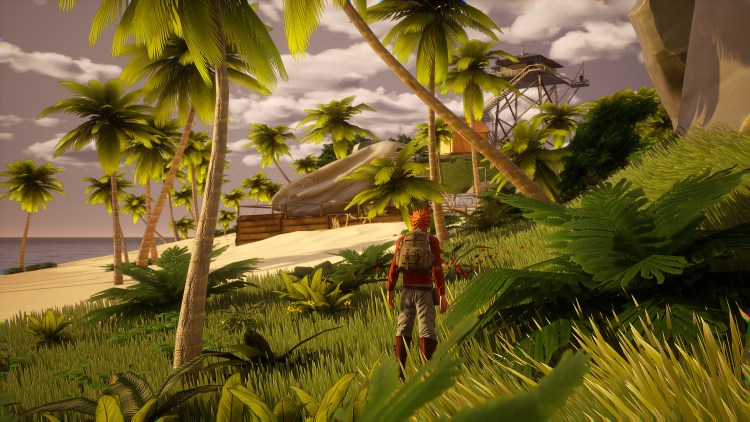 Sounds of the island

Aside from exploring the islands, Shane has dreams of his ancestors when he sleeps (or when he recklessly knocks himself out). These offer pieces of backstory and show off the dev’s skill at putting together varied, attractive levels. Visually, Hazel Sky looks pretty great considering the size of the team that made it. The faces do look weird, though. There’s a fair bit of voice acting, too, but you should definitely set it to the game’s native Portuguese. The English voice acting is pretty awful.

Speaking of sounds, music is pretty important here. Guitars are scattered around that Shane can play. You just pick a chord and he strums it. You’ll find sheet music with chord progressions on them, and playing them will have Shane perform the song that corresponds to each progression. It’s awesome. 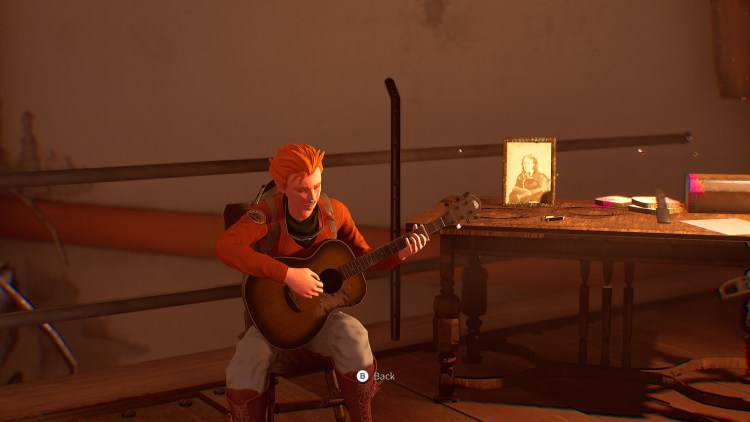 What’s less awesome is how soon Hazel Sky ends. I looked around a lot and took my time, but the game only lasted me a few hours. I enjoyed those few hours, though. And I wouldn’t mind going back to search more carefully for the many things I missed on my first run either. This is an attractive game, and I enjoyed repairing its vehicles and spending time in its world. I wish there was more to it, but this one’s more about the experience in the end.

Short but sweet, Hazel Sky is an entertaining little adventure with eye-pleasing vistas and some toe-tapping tunes.