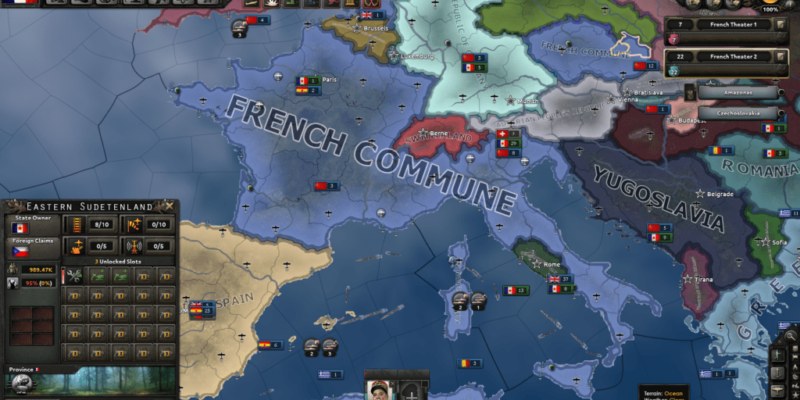 The recently released Hearts of Iron IV now has a beta version of upcoming patch 1.0.1 available for people to opt-into on Steam. To do so, right-click on Hearts of Iron IV in your Steam library, go to properties, then the betas tab, and select the 1.0.1 beta patch from the drop-down menu.

That should get Steam automatically updating your version of the game. If not, try restarting Steam. You can switch back to the prior version of Hearts of Iron by following the same steps as above, but choosing 1.0.0 in the drop-down menu instead.

This update should improve late-game performance (hooray), adds an experimental user interface scaling option for people with very large/small displays, allows you to zoom in and out on the map with page up/page down, adds a bunch of new ideology and leader names, plus nine new leader portraits (so South America will probably be run by more than one guy now).

Here’s the full changelog. According to the notes, this may even get pushed as a full, public patch today. Update 14 June: It took longer than that, but is now out of beta.

Stability & Performance
– Fixed several rare CTDs.
– Late-game performance optimizations.
– Large peace conference resolutions are now faster and also properly indicate that they are active to non-participants.
– Added GUI scaling option for people with very small or very high resolutin displays (experimental).
– Added a max framerate limiting system (defaults to 75fps) to help people with the combination of bad cooling, great graphics cards and very high screen refresh. If you are one of these with heat issues I would love to hear if this solved it (changing max_fram_rate in settings can let you remove its effect by making it higher, or go lower if you still have issues)

Gameplay
– Fixed an issue with deploying troops during spanish civil war when continuing savegames.
– Can now zoom in and out using PgUp and PgDown buttons on keyboard.
– Stopped an exploit where player could redirect a naval transfer into an invasion without preparation.
– Fixed a case where fleets who found themselves outside base range would be instantly deleted.
– Fixed some highlighting issues in tutorial.

Content
– Added 9 new unique nation leader portraits.
– Improved some VP/state names in China.
– Improved a lot of alternate ideology nation names and party/leader names.
– France can now send volunteers to Spain if they choose the Support Nationalists focus.
– Fixed many localization issues, both in english and other languages.

Torment: Tides of Numenera being published by Techland