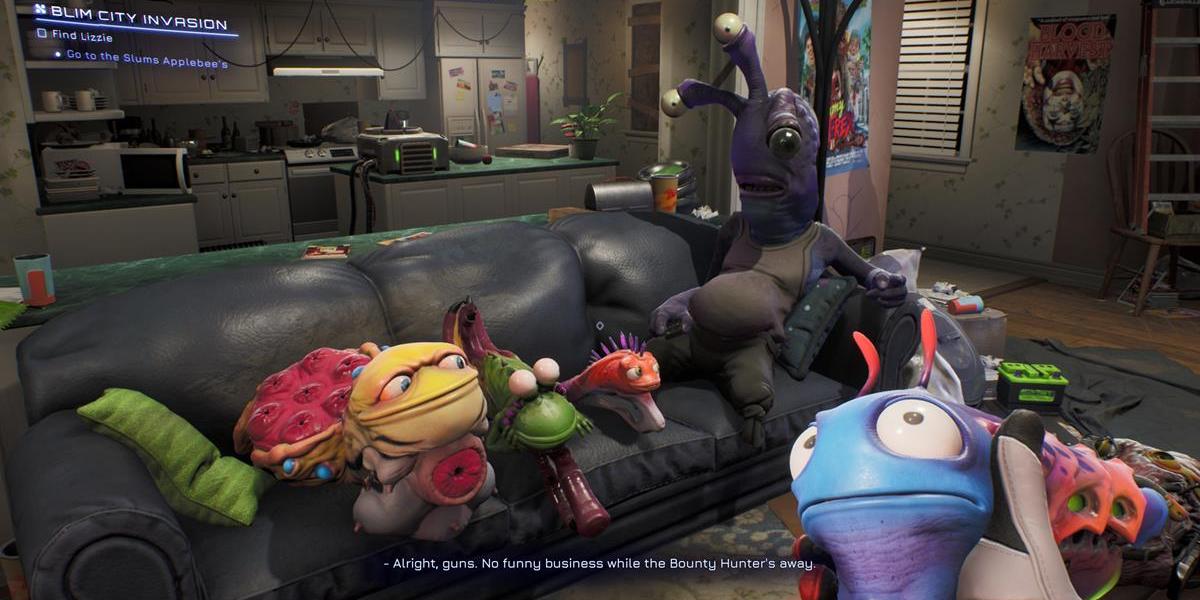 Aliens come to Earth to abduct humans and turn them into an intergalactic product? Yes, that’s the plot of Peter Jackson’s debut film Bad Taste. You may not have seen it, but I would be shocked if Justin Roiland hasn’t. It seems like the kind of movie he’d like, y’know? Not that High on Life is a blatant rip-off or anything. I’m just saying it seems like a bit of an homage. I know people are probably pretty sure it’s a lot like Rick and Morty too, and it absolutely is. But, if you like that show, this is a very good thing, as Roiland’s brand of humor is in fine form here. But it’s mixed with the basic premise of Bad Taste — sort of. Sorry, I won’t mention that movie again. I’ve always really liked it, is the thing, so you should watch it if you haven’t seen it.

The premise of High on Life is… well, I already told you the gist in the last paragraph. I did. You can go back and re-read it if you don’t believe me. Unless you’re just skimming and you don’t read introductions. Anyway, an alien cartel called the G3 is selling humans as drugs to other aliens. The protagonist meets up with a homeless alien bounty hunter and sets out to decimate the G3 with the help of several talking guns called Gatlians. The main gun, Kenny, is voiced by Justin Roiland and he basically talks like Morty. But you probably expected that.

The game is very funny. It didn’t have me in stitches the entire time or anything, but I laughed a lot. There’s an absolute mountain of swearing, some gross-out humor, and a lot of jokes centered on murder. But you’re a bounty hunter, so it fits. High on Life isn’t just funny, mind you. The actual narrative is compelling in and of itself and I actually ended up caring about several of the characters, including the Gatlians. But it’s hard not to when they’re voiced by such comedy favorites as Tim Robinson of I Think You Should Leave (who astoundingly goes the whole game without screaming at anybody. Well, not the gun he plays, anyway. He voices some NPCs, too) and JB Smoove of Curb Your Enthusiasm fame. 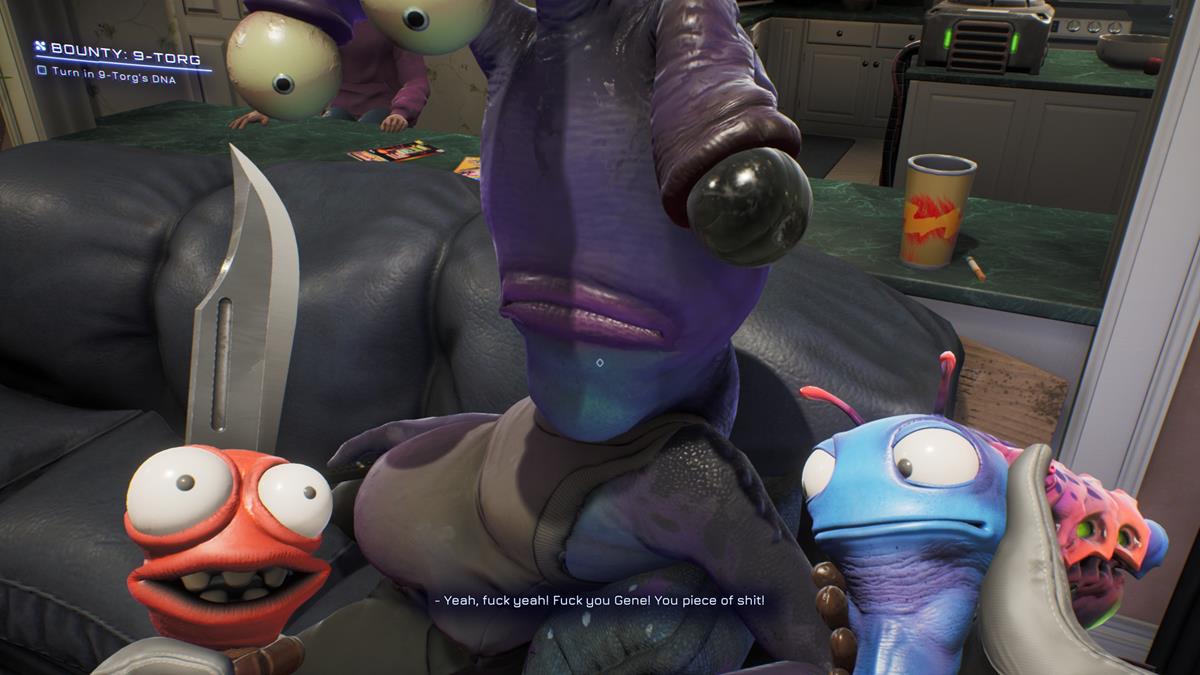 In Space, no one can hear you make obscure references

If I had to describe High on Life in terms of another video game, I’d say it’s a lot like Rage. The first one, though. Except this one’s ending doesn’t feel like it happens partway through a larger story. I will say that the ending was far shorter than I would have liked, as the game just kind of stops after the main threads are wrapped up before using Polaroids with writing on them to work as an epilogue. The game isn’t open world, but it does have three large areas you can travel to and from via the Bounty 5000 machine, which lets you pick what areas to where you’d like to warp.

These areas have a lot of room for exploration with plenty of chests to track down that contain money, upgrades, and collectibles. You’ll be hitting up a small city, the adjacent slums, a forest planet, and a desert planet. You can go back to them whenever you want to hunt for chests and some can only be opened using new equipment you acquire. The areas are well designed and look awesome, so exploring them is appealing. Although there’s no map, which can make finding your way quite difficult.

High on Life has a waypoint function that keeps you on task, but I don’t think you can use this while exploring outside of a main mission. Getting lost can be a real possibility. Finishing one bounty didn’t have a waypoint function available, so I had to wander until I found the warp point. But I discovered some good stuff on the way, at least.

The story structure is built around accepting bounties to kill G3 leaders. You have to track them down, kill them, and return with proof to collect cash. Cash is used to buy new upgrades at a pawn shop and several smaller stores you’ll find out in the wild. You’ll buy upgrades for your suit, your ammo capacity, and specific mods for your guns/teammates. 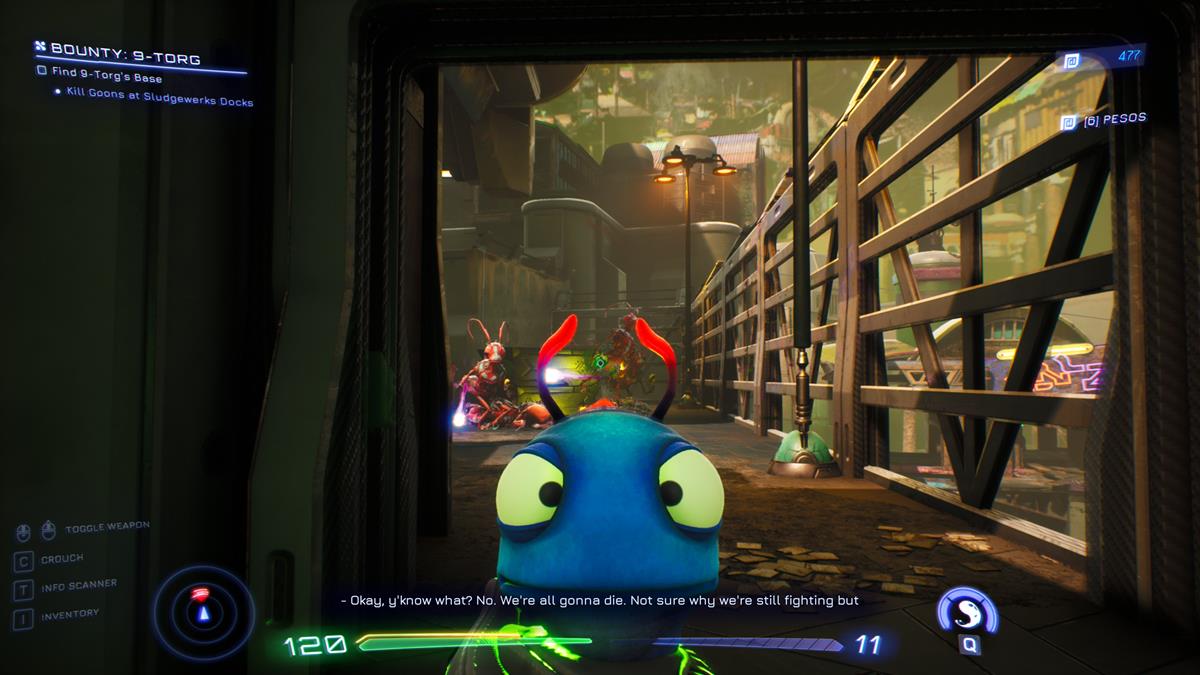 I occasionally heard some concern that the fact the guns talked would lead to Roiland improvising for hours on end, but that really isn’t the case. Your guns are decently developed, personality-wise, and none of them are annoying. Roiland voices Kenny, who is your pistol. Kenny stutters, stammers his way through sentences, and often swears up a storm, but he’s mostly normal.

He’s also the absolute best gun. Kenny is so good that I didn’t use the other guns much, save for occasionally Gus, who is a shotgun. You also get a machine gun named Sweezy and a gun named Creature that births tiny creatures that attack foes, but I simply didn’t see much reason to use them. The guns have the occasional quip or opinion to share while you have them out, but I always enjoyed listening to what they had to say.

But High on Life is a first-person shooter, so it needs more than just humor. Thankfully, the shooting is better than I expected — this is a full-featured game. The different guns are all mostly satisfying to use and the hit detection is very good. Headshots result in enemy heads popping off, followed by streams of blood. They mostly have goop armor that flies off as you shoot it. The issue is that there isn’t much enemy variety, and there are really only four guns. So the action can feel a bit samey. But the amount on offer is perfectly acceptable for the game’s length. I’d wager it’ll take most players 10-12 hours to get through, depending on how much side stuff there is.

There is room to focus your playstyle, though, as each gun has an ability that’s useful in both combat and traversal. Sweezy can slow down time in pockets and Creature can temporarily brainwash enemies. These abilities are fun to use and the traversal itself is a particular highlight. You can boost your mobility with some upgrades too, including a very useful slide that uses up your suit’s fuel to zoom forward and slam into enemies. And you get a talking knife that’s obsessed with stabbing people. It’s so useful that you don’t actually have to shoot things most of the time if you don’t want to. High on Life has a great balance between action, exploration, and plot that all combine to make for a fleshed-out experience. 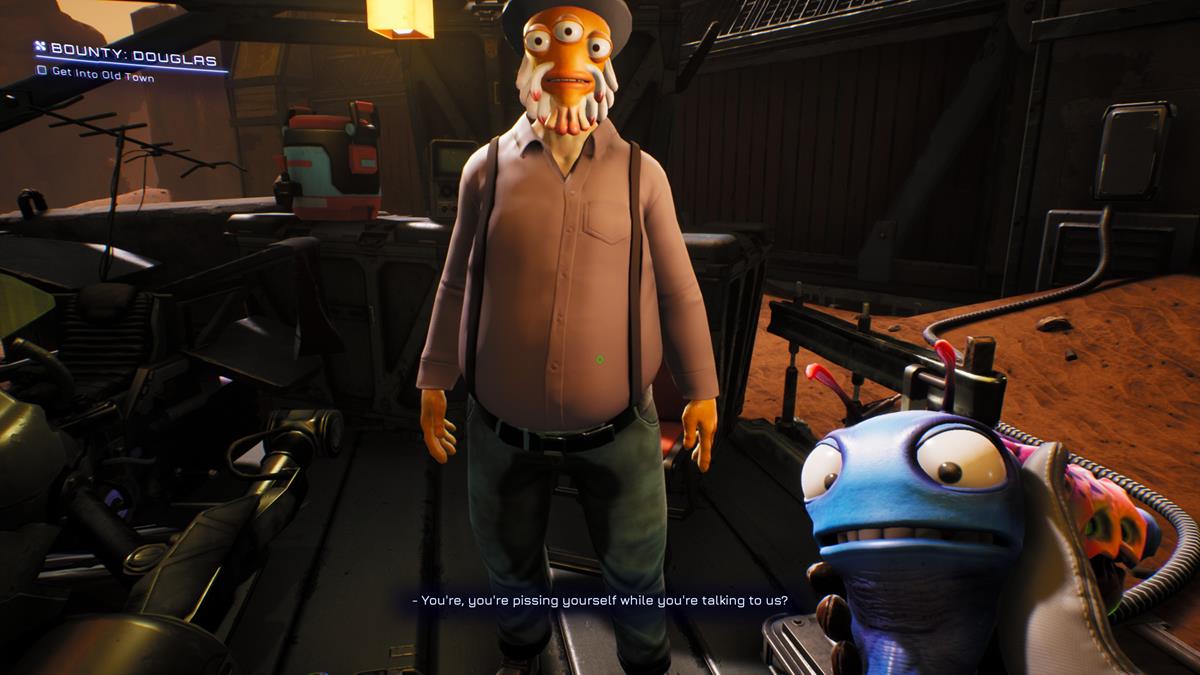 There’s unfortunately no new game plus, but you can continue to explore to your heart’s content after the credits roll (although you don’t get to collect on your final bounty, which irked me). High on Life is of exceptional quality from a presentation standpoint. The art direction will feel familiar to Justin Roiland fans, albeit in 3D, and the different areas are memorable and have a definite sense of place.

But the main draw is the humor and story. If you like Roiland’s comedic and storytelling styles, this is your game. If you just want a good open-ish first-person shooter, you’ll also get that here. This is an excellent comedy game that features a much higher budget than I think I’ve ever seen one have before, so it’s easy to sit back and laugh while blasting alien heads off.

High on Life is a hilarious piece of comedy that also makes for an enjoyable first-person shooter, especially if you're into Justin Roiland's brand of humor.