There are probably lots of games from the 90s that deserve a “remaster,” to use the term of choice these days. On the other hand, there are games which should probably just be left alone and nostalgically remembered for how good they were. Happily, Homeworld is very much in the genuine classic category.

When Gearbox picked up the Homeworld IP from THQ and announced that the series would be receiving a full makeover, fans of the the series were overjoyed at the prospect of a revitalised version of the game. I tend to agree with this sentiment, because Homeworld stood out as a unique RTS compared to everything else in the genre between the mid 90s and 2000.

So, what’s inside this Homeworld Remastered Collection? Both the original Homeworld 1 and Homeworld 2 are present in their unaltered forms, which may not be of huge interest to most unless you’re a fan whose lost the original CDs (thankfully I haven’t); but they are a nice, preservation-conscious inclusion. The real juice of the collection, however, are the Remastered versions of both games. Let’s squeeze out some details. 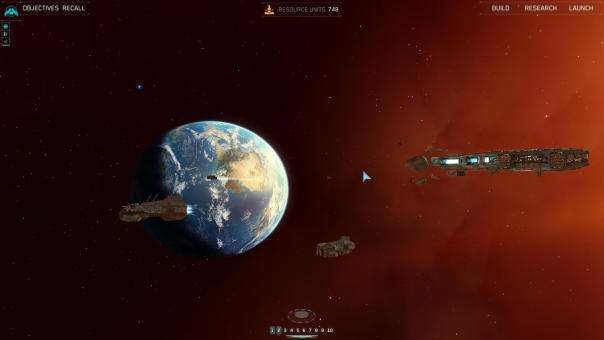 When Gearbox got their hands on the IP and decided the games needed some spit and polish to bring them up to 2015 standards, they opted to move Homeworld into the Homeworld 2 engine and then begin on reworking both the games at the same time. This means that you effectively have features and game mechanics blended together to make a more cohesive experience, with a bit of give and take from both games.

For example, fuel is no longer something players need to watch (as it initially was in the first Homeworld) and selectable unit formations are available in the new engine for both games. As it’s been so long since I played the originals I’d actually forgotten about most of these game mechanics and didn’t think twice about them when playing Remastered, but ardent fans will notice the changes.

Starting out again in the original Homeworld was exciting. The original was blast of fresh air into a slightly stale RTS room when it was released back in 1997, and also delivered a great sci-fi story about a stranded race on a voyage of discovery through the vastness of space. Homeworld Remastered sharpens up the hand-drawn cinematics between missions, but these thankfully retain the unique style of the originals and still tell the story perfectly.

The atmosphere was helped immensely by what I think is one of the finest examples of a videogame score, composed by Paul Ruskay. These soundscapes really helped pull the player into the game universe, grabbing you with a spectrum that runs from tension to ambiance (depending on what’s happening on-screen at the time.) All the audio has been lovingly remastered, but has otherwise not been tampered with. It’s safe to say that without their great soundtracks, both Homeworld games would not have felt so immersive.

The same goes for the unit responses which all sound quite serious and matter-of-fact; something I really like about the series. 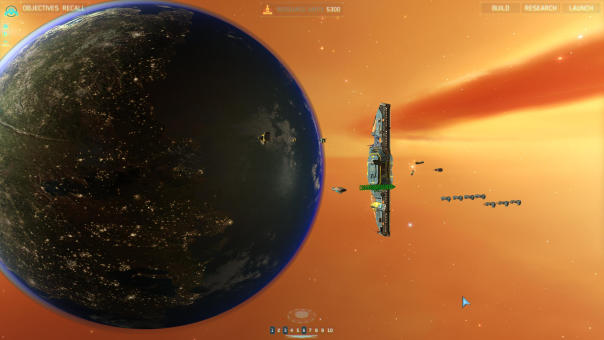 All of the textures in Homeworld Remastered have been significantly enhanced, and this is what makes the games look and feel like brand new titles. The detail on all the ships is a vast improvement, which becomes especially clear if you load up the included classic versions for some side-by-side comparisons. Explosions of larger ships are immense and make the screen pop with colour. It’s quite fantastic to watch.

The most significant change is the game’s UI. Homeworld’s original UI was really quite basic and by the time Homeworld 2 was released it had moved on and was vastly improved. Even though Homeworld 2’s interface was superior, that hasn’t stopped gearbox tinkering further with the interface layouts, and it’s something that took some getting used to. Initially, I wasn’t quite sure if it was an improvement.

Unlike Homeworld 2, the whole screen is utilised for the actually gameplay with small HUD elements dotted around the corners of the screen. This may not immediately appeal to Homeworld 2 veterans, but after playing for a while it should actually become almost irrelevant due to the importance of using hotkeys (rather than UI buttons) in a Homeworld game. 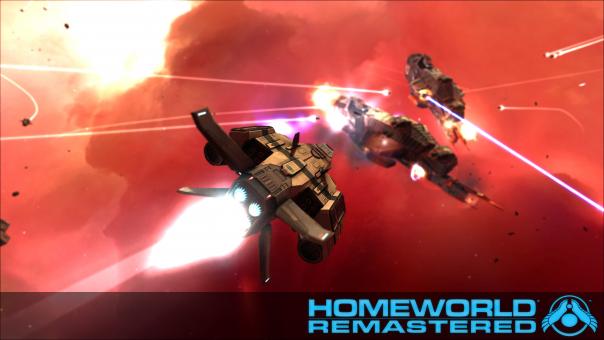 If you don’t master the hotkeys things can get a little tricky. Without them, it’s slower to follow through on important actions quickly. More so than other top-down RTS games.

Much of the time is spent away from the build units such as the Mothership or Carriers, but grouped units need to be continually moved around the three dimensional maps and you don’t want to have to keep clicking back and forth hunting down specific units. Resource Collectors are a great example: there’s a hotkey to jump right to inactive Collectors and another to tell them to go and pick up resources. Veteran players will find some keys have changed, but they are fully customisable in the game’s menu system so don’t panic about that.

Research plays a key role in Homeworld and if you’re slow with it, especially in multiplayer, it can cripple you and leave you completely helpless. In the single player this all unlocks with progression and you don’t have to research everything, but that depends on your style of play. There were a couple of things that I didn’t research in my play-through, but it was still easy enough to progress.

Using ships like Salvage Corvettes to effectively steal enemy vessels is always a good tactic, and that doesn’t require a whole lot of research. It saved my skin on a few missions where funds and resources were low and I needed a way to stop the advancing enemy. Ships are carried over into the next mission and there were a couple of times where my  fleet was a little sparse; so hey, why not steal a few enemy Frigates to make life a little easier? You have to adapt to each mission depending on what kind of resources are available, so tactics like this really help. It also makes you feel quite smug.

When playing on higher resolutions such as 2K or 4K the standard scaling does make the UI a bit too small, but it can be scaled right back up with four different size options available in the options menu. In fact there should be enough graphical tweaks available to satisfy most PC gamers. Here’s a picture of some of them. 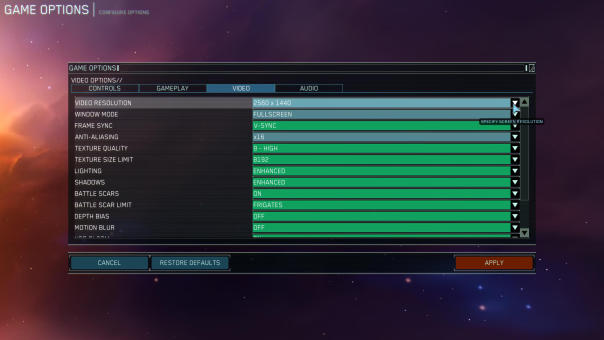 Tinkering with the video options.

While we’re on the subject of visuals, you really can’t fault Homeworld. Relic made space a much more interesting place than the reality of a three dimensional void of blackness. The already vibrant and colourful rendition of space looks even better in Remastered, thanks to gas clouds, distant nebula, and bright stars. As each mission is completed and you move on in the story, there’s always another visual treat to look forward to. I still think it’s one of the most beautiful looking RTS games ever created.

Let’s also not forget the die-hard fans who have stuck with the franchise and released mods for the game; a fact that did not go unnoticed by Gearbox. Homeworld Remastered adds mod support right into the game’s menu system, and the company actively engaged with modders during development. Homeworld 2 has received quite a few visual enhancement mods since it was released, and it’s good to see some of that work being pulled together.

Modders will no doubt be porting classic mods over, and we’ll see new ones appear to either tweak the game further or add new features. Remastered should have some decent post-release legs. 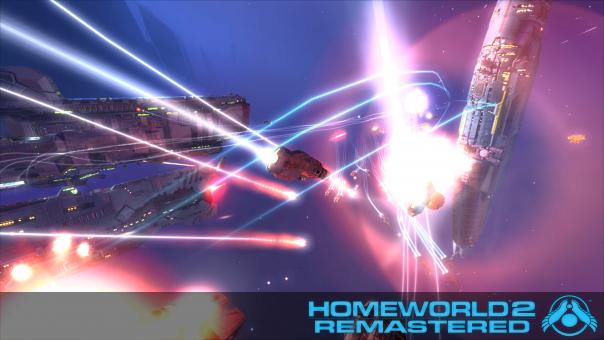 There will be plenty of people who have never played the original games, either because they just passed them by or they were too young at the time. Remastered can introduce those players to the wonders of the Homeworld universe. There are also plenty of older gamers like myself who want to relive the titles with all that modern technology can offer, so it’s a potential demographic win-win for Gearbox.

I could go on and on about Homeworld and completely ruin the story for PC gamers who have not played the originals; but it’s story that needs to be told by the game’s fantastic visuals and audio, so I won’t be an arsehole and ruin it with words.

This version of Homeworld comes with an in-built skirmish mode and what Gearbox are calling a multiplayer ‘beta.’ The reason it’s being labelled this way is because Homeworld and its sequel are being combined into one multiplayer experience. The races of Hiigaran, Kusha, Taidan and Vaygr are now all playable in the same space, and clearly Gearbox want to further test these out for balancing purposes. Expect changes as the multiplayer develops.

Everything from starting resources to the colour of your ships can be selected as part of online play. If you want pink ships, then so be it. With multiple variables to track (things above and beyond the important issue of ship colouring,) it’s going to be interesting to see how the multiplayer alters in the weeks ahead. 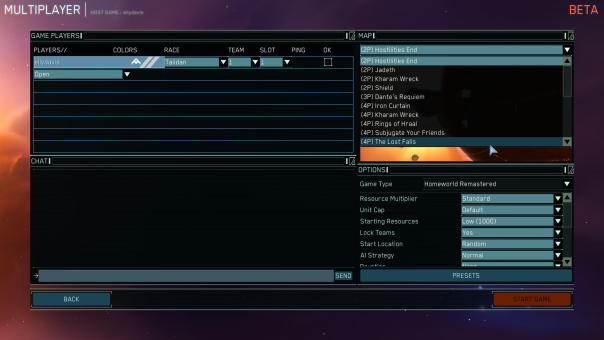 Remastering both Homeworld games was a brave decision, because messing with the classics can be a dicey business; but the purchase of the IP from THQ has turned out to be a brilliant move. I’ve played quite a few new titles from start to finish in the past few months, but there’s not been one that’s kept me glued to the PC through the night until 7AM. Thanks to Homeworld, I’ve now struggled with sleep deprivation for days. It keeps dragging me back to play more, even though I know what’s going to happen in the end. My addiction has returned.

Take that how you will, but it’s intended as a recommendation.

It’s not often I go back to games I’ve played years ago, but Homeworld hits a sweet spot. Between frantically trying to win a space battle with fighters, corvettes, or capital ships there are moments of zen-like calm that make both titles a joy to play.

With Homeworld: Shipbreakers still to come from Blackbird Interactive, we can only hope that the team that created Homeworld Remastered are put to work on a third installment of the series.

It’s evident a lot of time, effort and care has gone into this release, which should be enough to refute any concerns about Homeworld Remastered being a cash-in. To make an old game feel new is never easy, but that’s what Gearbox has successfully achieved. This is a must-have game, perhaps even if you’ve played the originals. If you haven’t yet played them, it should be a simple decision to do so.