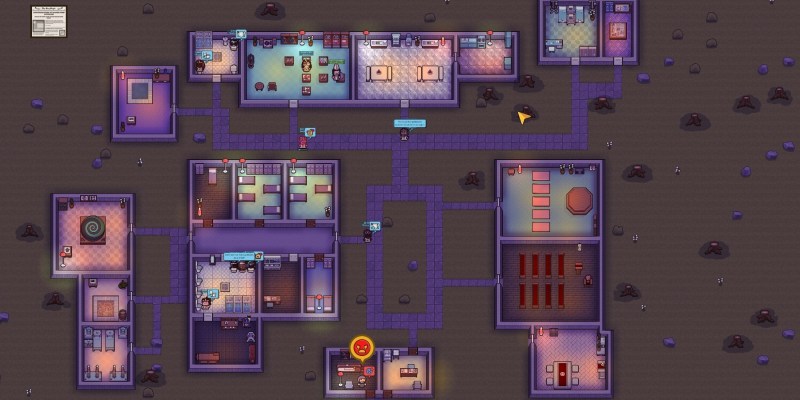 Sometimes you get it, and sometimes you don’t. And by it, I mean running a successful cult without the cops interfering (again). Fresh out of its Early Access period, Honey, I Joined a Cult isn’t exactly what it seems. Instead of joining a cult, you run it. Build a base, gain followers, and watch your compound grow. It’s a pretty straightforward management sim that gives you just enough freedom to create an endless loop of building and manipulating.

I haven’t played many cult-based games, but this one starts as expected. It opens with the SOB (think FBI) raiding a compound on the grounds of cult-like behavior and brainwashing. The leader gets off scot-free, as most people in these situations do, and goes on to start a new, more honest life… which lasts all of two seconds. In the next scene they’re starting a new cult and you’re the omnipresent manager of it.

Making a cult is incredibly simple. There are 11 presets to choose from, and you can change almost every cosmetic option included. I’m a big tutorial person, and I can’t write a review without mentioning it. So, here goes. Once you’re done playing around with the cult creator, Honey, I Joined a Cult will walk you through everything. With the tutorial on, any new mechanic is explained to you. At the very start of the run, the game won’t even progress until you’ve completed the task it’s teaching. Management sims get busy and they get confusing, so having a little bit of optional hand-holding isn’t a bad thing. 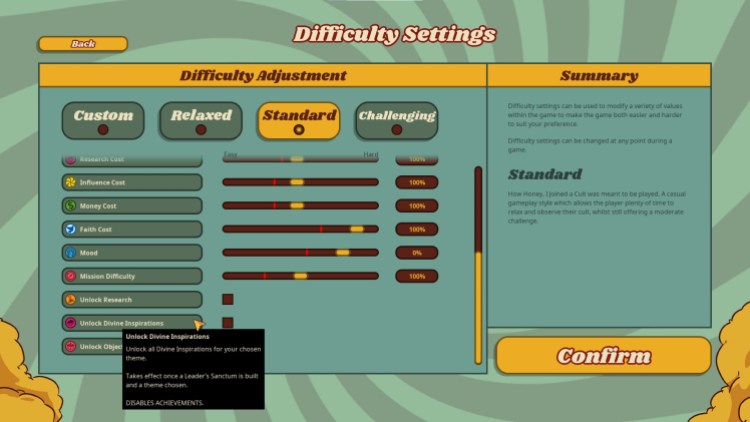 It would be unnecessary and confusing to discuss every single gameplay aspect of this game – there’s a lot, and they change and grow as time progresses. So I’ll just focus on the big ones (aka, the ones I find the most fun to play with). To start, I am very into the literal base-building aspect of the game. Any kind of business needs facilities to keep workers and patrons happy. As you research more topics, you unlock more buildings to build and run. I’m not ashamed to admit I have multiple save files going just so I can build the same buildings over again but in a new formation and with different designs.

Making schedules for cult members and managing their health/happiness is equally satisfying, as a mismanaged cult will only lead to followers leaving and money draining. You have to manage multiple different stats (like faith, PR, and criminal heat), which are spent on multiple different things and allow you to add more to your compound. Like I said, it’s a lot. Thank goodness there’s that tutorial I mentioned.

As I mentioned, Honey, I Joined a Cult was previously in Early Access for a little over a year, and the time was well spent. A lot of its features that kept me engaged came during its time in Early Access, like its customization options 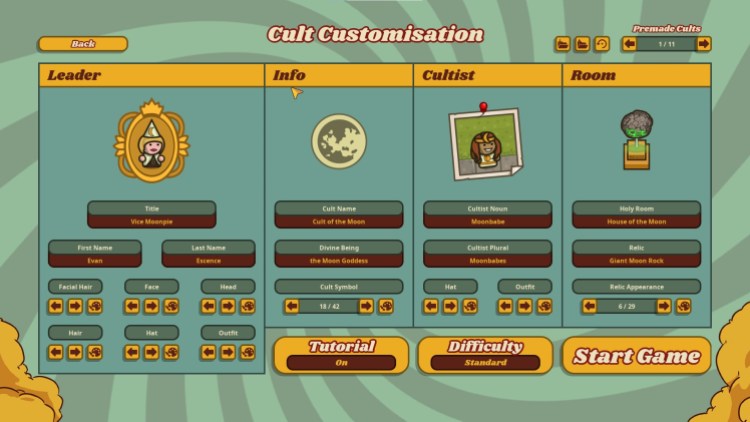 They start pretty simple, from being able to change the colors of the décor in the rooms you build to changing difficulty settings to the point where you turn the game into a full sandbox experience. The difficulty settings are on a slider, which isn’t always ideal in terms of clarity, but they also have percentages to make things a little more clear. Each difficulty slider has a red bar marking where achievements turn off as well, if that’s important to you.

Management sims are built to last, but the monotony can often ruin them. Once you’ve spent enough time maxing everything out, things get stagnant. I found that these seemingly smaller additions helped extend the time I spent in the game. The replayability isn’t high, but it’s there. 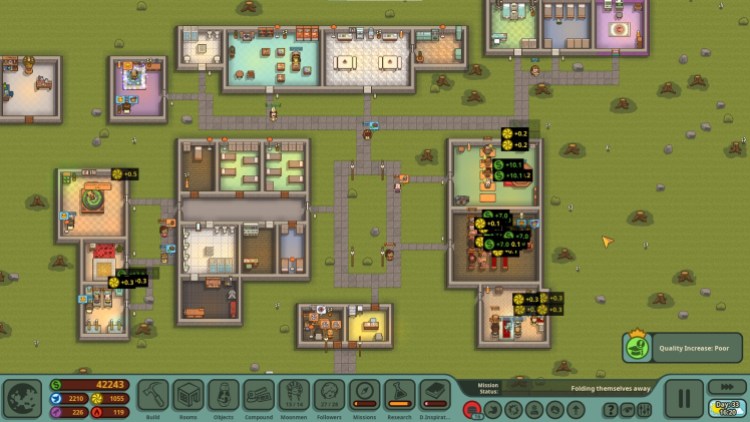 Naturally, there’s a bit of story worked into all of these mechanics. This is a fun and challenging management sim, but the real deciding factor is if you like all its set pieces. Honey, I Joined a Cult provides a comical and satirical take on cults, which everyone isn’t going to like. It pokes fun at how quickly people can fall into plots like this and the way you run the cult at the beginning is less than ideal.

Cult members wash their hands at troughs, use the bathroom in buckets, and only have vending machine food to eat. Throughout my time running multiple cults, followers and cult members often had disparaging speech bubbles that pointed to how gullible and uninformed they were. 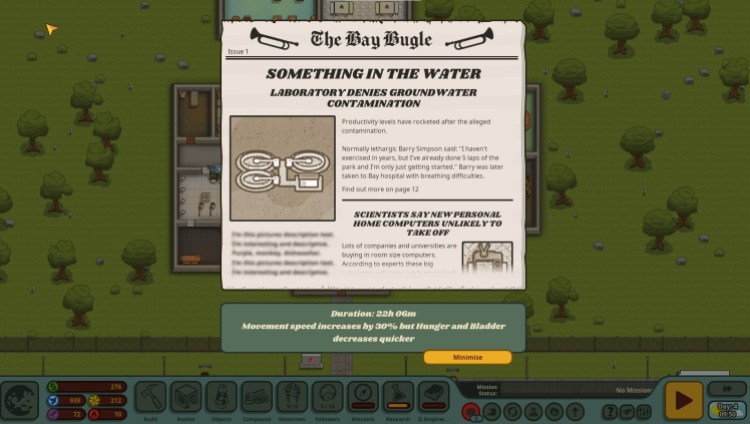 Tongue-in-cheek humor is expected from a game like this, so know that Honey, I Joined a Cult doesn’t go against that mold. A lot of the dialogue and story beats are easy to miss as you focus on the actual mechanics of the game, though. So besides the random mission quizzes that asked me to figure out which elusive United Kingdom location was real, it was mostly background noise.

At the end of the day

Honey, I Joined a Cult has its own simplistic art style that reminds me of the flash games I used to play, but with much better graphics than my 10-year-old family computer could handle, and the music is a little funky in that nice throwback to the ‘70s kind of way. Sonically and visually, it’s inoffensive. 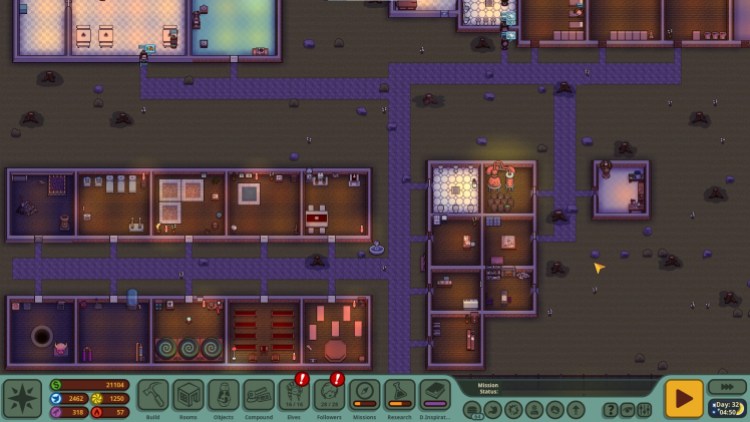 My perfectly laid out cult that I’ll forever be proud of.

I’ve spent hours watching small characters scurry around the compound I designed. I can’t get enough of it. I’ve started two different cult save files that I run very differently, and I don’t see myself letting either fall by the wayside. Management sims have such a satisfying gameplay loop when they’re done right, and Honey, I Joined a Cult gets the job done. I’ve yet to run out of things to do because I love to constantly change my cult around, but for those that min-max, Honey, I Joined a Cult might start to feel too finite.

Honey, I Joined a Cult

Honey, I Joined a Cult has multiple components, and they all work well together. Its customization options add a layer of replayability that isn't often found in management sims. However, it the well will run dry for some.

EA is making ‘at least three’ games with Marvel, starting with Iron Man

The Steam release of Dwarf Fortress will arrive next month