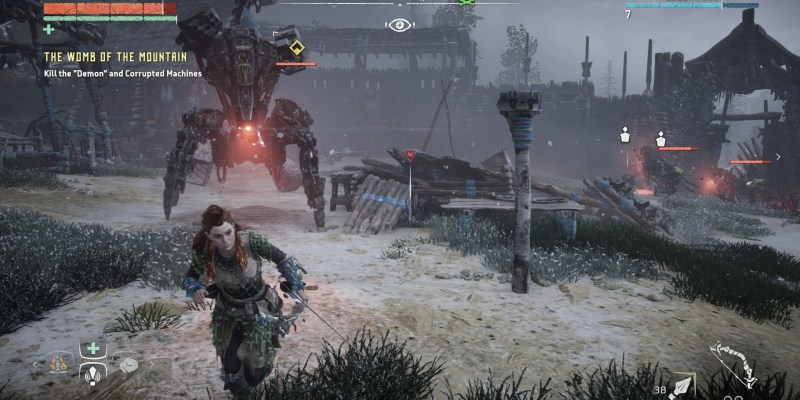 What do I even say about a three-and-a-half-year-old game that has already sold over 10 million copies? I bought the game on PlayStation 4 years ago, but never cleared through enough of my backlog to get to it. Furthermore, I was shocked when Sony announced its plans to bring Horizon Zero Dawn, and other potential exclusives, to PC. Now after finally putting a bunch of time into it, I’d undoubtedly say Horizon Zero Dawn is an enjoyable, impressive game. Unfortunately, either the hype boosted my expectations far too high, or the past few years made aspects of it less palatable than they might have been when it first released.

You almost certainly already have the gist of what Horizon Zero Dawn is. You play as a red-haired woman who fights animal robots with a bow in a post-apocalyptic setting. Society has been destroyed, and said robots stalk the land. The narrative is fairly interesting and sprinkled with some enticing mysteries that hint at some neat plot developments. However, it doesn’t help that the protagonist, Aloy, is practically perfect. She’s the smartest, strongest, and the fastest person that’s ever personed before. People she meets have almost all heard tales of her and they’re all deeply impressed.

It’s very much a case of a story telling the audience that the character is great instead of showing it. I’m playing a video game, so it’s not surprising that my character is good at things. My character respawns when I die and I can try stuff repeatedly. During the early hours of Horizon Zero Dawn though, there’s a bit of a disconnect between the narrative and gameplay. If you don’t have melee damage reduction on Aloy, most medium-sized robots can kill her in two hits. Her unmodded attacks do a rather small amount of damage, too. A lot of what she does that impresses people can also be attributed to a small device she wears in her ear that gives her information. 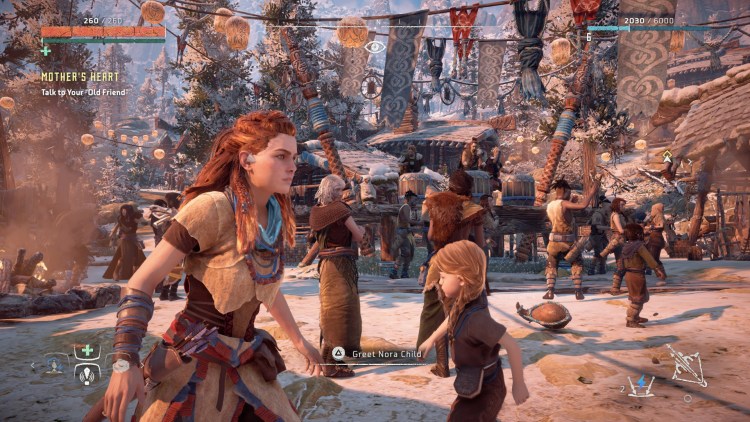 All of that considered, Aloy simply doesn’t have much personality. Neither do most other characters for that matter. It doesn’t help that the voice acting, lip syncing, and facial animations are surprisingly below the standard set by the rest of the presentation. Whenever a person was talking, I typically found myself less interested. Oh, and the hair. There are only a few hairstyles for NPCs and they’re recycled over and over and over again. None of this is terrible, mind you, but it all just feels dated.

The colors, Duke! The colors!

Those aspects of the presentation are all the more curious when you compare them to Horizon Zero Dawn‘s world. Simply put, this game has the best-looking environments I think I’ve ever seen. They’re large, detailed, unique, and so very colorful. It’s quite possible that seeing the world with the enhanced PC visuals was worth the wait on its own. From lush forests to clear streams and rocky canyons, the biomes are simply marvelous. Most of the screenshots I took looked amazing, regardless of how badly-timed my captures were.

The world, alongside the way Aloy moves through it, are the things that tie Horizon Zero Dawn together. You know how it goes. Many open-world games are loaded with lazily re-used assets, with everything in them copied and pasted ad nauseam to the point that you’re innately aware that you’re playing a video game that’s meant to just give you untold hours of content without offering anything of substance. This is a big game, but it’s a controlled kind of big. You’ll find side quests and certain familiar activities, but there’s just enough of everything. 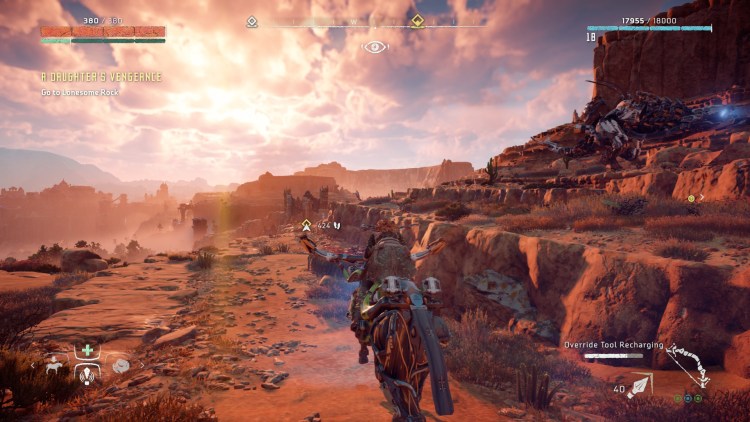 This is the epitome of the kind of open-world game where you say you’ll only play for another ten minutes before finding yourself jumping to the next thing. It’s so easy to spend hour after hour hunting and gathering while taking in the sights and perhaps trying to force Aloy to walk up steep terrain and platform on the sides of mountains. The pacing is excellent and the world just begs for you to inhabit it. But there are some trade-offs, of course.

Been there, done that

Although I love the world itself, the gameplay and game systems feel almost perfunctory. Don’t get me wrong, everything is generally of good quality. However, the individual components are of a lesser quality than the games Horizon Zero Dawn copies. There’s stealth, but it’s just okay. The button prompt for stealth kills doesn’t always become available when it should. There were also way too many times I got in place behind an enemy that didn’t know I was there, only to hit them with a regular spear attack, which does very little damage instead of killing them.

There’s melee combat but there’s barely anything to it. Aloy has a light and heavy spear attack. It’s also okay, but feels rather clunky and doesn’t carry much impact. These attacks often feel weak to the point that you’re better off not even using them in many scenarios. Dealing with the robots constantly reminded me of Monster Hunter, which Horizon Zero Dawn shamelessly borrows from. It does a pretty good job of copying it, but I feel like combat is more frustrating here than it was in those games. Dodging monster attacks often sees Aloy getting hit and taking a massive amount of damage even if she should have dodged clear. 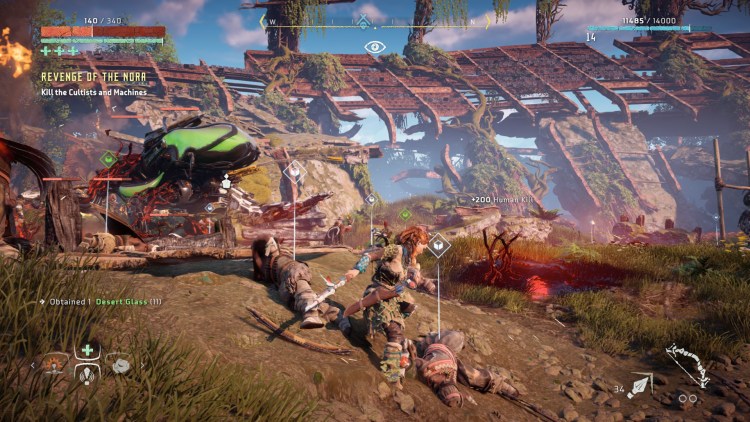 Then there’s the shooting. Aloy can purchase a good amount of weapons that are useful in different scenarios. You’ll want to use different bows and traps depending on the enemies you’re up against, and all of this is the best part of the combat. Much like the spear attacks though, I feel like shots from the bow lack power and that bows themselves aren’t particularly satisfying to use outside of destroying or removing robot components, which is always entertaining to a certain degree.  What’s less entertaining are the sections where Aloy uses her ear device to draw lines that lead to a thing that she’s “tracking.” They’re like the investigation sections from the Arkham games or The Witcher 3, but they make less sense because, instead of using her skills, she’s just doing what a computer tells her to.

In the end, Horizon Zero Dawn feels like more than the sum of its parts, even though I didn’t enjoy some aspects of it. The robots themselves are well-designed and visually distinct, much like the rest of the non-human visual elements. All-in-all though, it’s a mostly standard open-world game that’s simply more playable than many due to the focus on pacing and spectacular environmental design choices. This is the way to experience the game if given the choice.

The port does have some issues on AMD cards using older drivers it seems, but new ones appear to have fixed the problems. They mostly affect foliage, hair, and general geometry, with foliage behavior being jittery and with all three completely vanishing at times. But even these issues settle down after a while (although they restart every time the game does.) If you’ve wanted to play this game for a while, it’s got a lot going for it, but keep your expectations in check. It’s gorgeous and has a lot of content, but it also feels designed specifically to appeal to as many people as possible, often to its detriment. 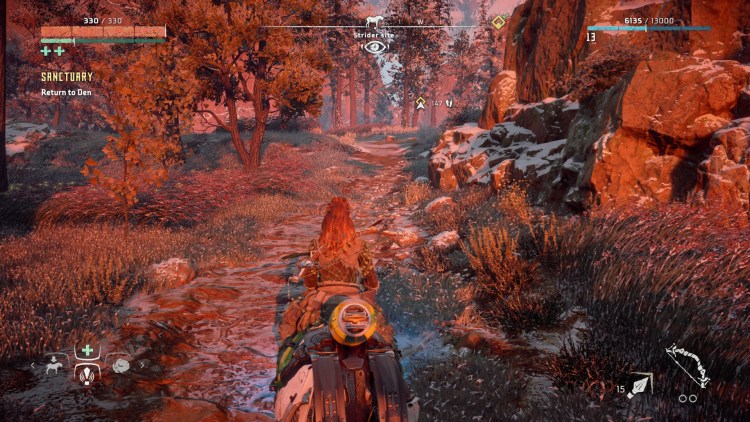 Horizon Zero Dawn is gorgeous and innately playable, even if the open-world gameplay it presents will feel overly familiar to most. The port has some issues that will almost certainly get stamped out in short order and the gameplay has its fair share of frustrations, but anyone looking to stalk some robots will find plenty to like.