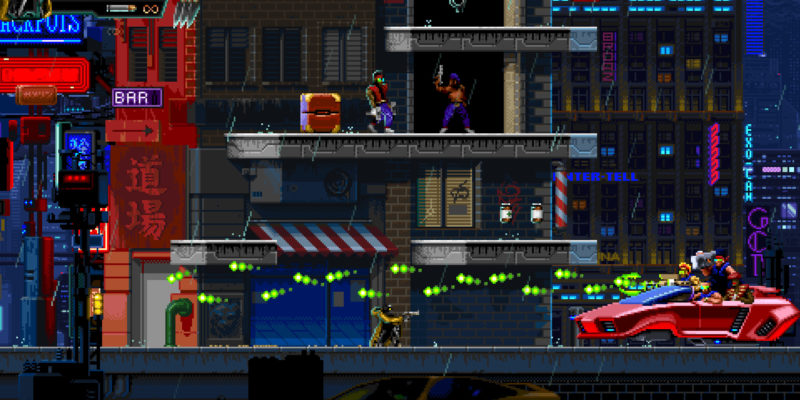 Do you want to be a gritty ’80s action movie hero, mowing down mooks and reveling in it? Do you long for cyberpunk and sci-fi movies that featured more abandoned factories than CGI? Then Huntdown from Easy Trigger Games is the game for you.

Like every good movie of the era, Huntdown starts with a text crawl. It’s the future and the world is a dump. Everyone is either a corporate citizen or a member of a criminal gang. Yet one group rejects both of those paths. Those people are bounty hunters, only in it for the money, maybe the thrill of the kill as well. You can become one of them and take on the massive gangs causing unrest in local corporate holdings.

The three mercs are Anna Conda, John Sawyer (a cyborg), and Mow Man (an actual robot). You’ll be controlling one of them, and another can join if you have a friend to play with you. The characters are not laden down with stats – each has five health points (at normal difficulty, at least), no particular damage resistances, and identical movement. So what sets them apart aside from the visuals and endless quips are their armaments. 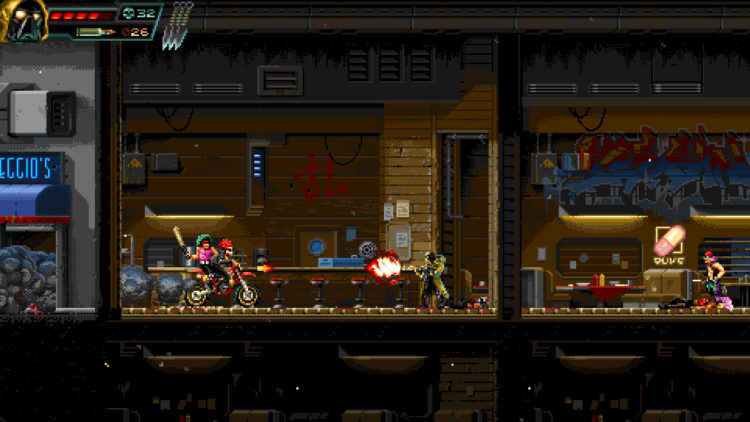 Visit the local bar, shoot some of the local crazy bikers.

Each hunter in Huntdown has a unique pistol with endless ammo reserves and a cooldown-enabled thrown weapon. So Anna Conda totes a machine pistol that fires in burst, Sawyer has the slow yet powerful magnum, and the robot is just equipped with the most middle-of-the-road pistol that can shoot almost as fast as you pull the trigger.

However, Mow Man can also throw kunai – flying in a straight line, it’s the easiest to use thrown weapon. You see, while Ana Conda’s axe kills most mooks dead, it has a ballistic arc and limited range. Meanwhile, cyborg Sawyer’s boomerang is much weaker, but it can cut the enemies on the way back as well. The differences are small but important.

Murdering your way through Huntdown‘s many sidescrolling levels, you’ll be shooting, kicking, sliding, throwing, and ducking your way though besieged suburbs, gang-controlled metro stations, highways, and cyberpunk casinos. And you’ll jump – a lot. While taking cover is an important part of survival, it’s not always feasible and getting the hell outta dodge will be vital. 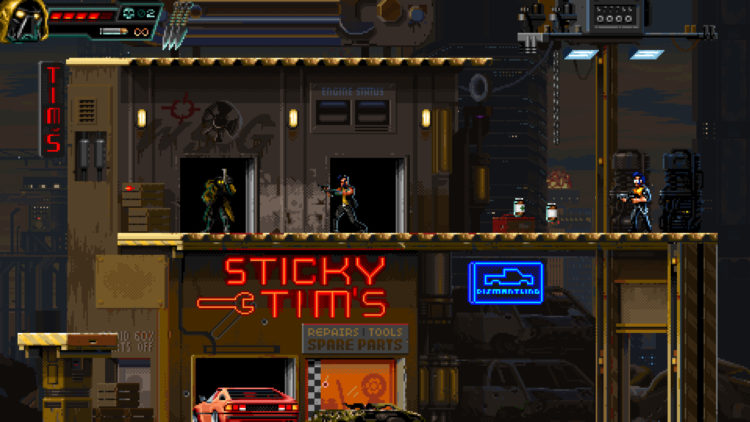 The levels themselves offer some environmental hazards and the slightest hint of platforming, but most of the danger comes from gangers. Oh, and there’s a great variety of those, spread between the four gangs in the game.

Sure, basic thugs will never get old (because they brought a melee weapon to a firefight), but you’ll also encounter dudes armed with Molotovs, machine guns, and anti-materiel rifles. You’ll fight jetpack troops and armored varieties of the more regular gangers. You may even run into bikers, buggies, and fancy mini-boss vehicles.

Huntdown is great with drip-feeding both new environmental challenges and new enemies. The pace is good and you’ll never feel overwhelmed — and stuff that would feel gimmicky doesn’t saturate the levels.

When you’re paid, killing is as easy as breathing

There’s a lot of variety to the bodies that will get in your way by emerging from the shadows, entering via metro trains, or just waiting there. Luckily for you, some of them will drop their guns. And picking up the shotguns, rifles, and heavier ordnance will make your work (hunting bounties) much easier. Even better, you can switch between the limited-ammo fancy gun and your pistol to conserve ammo. 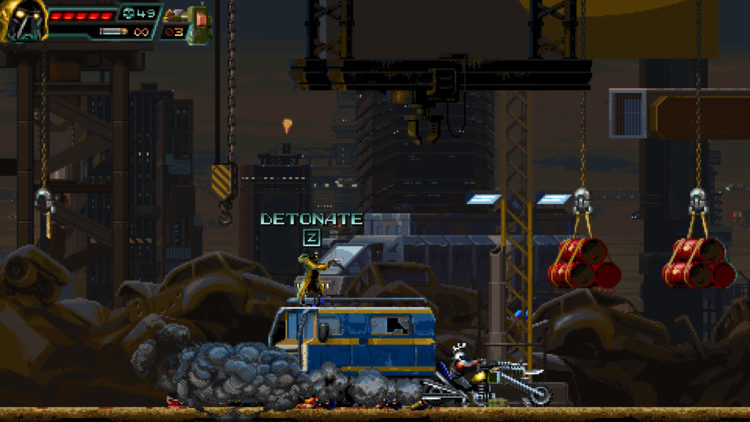 If you look closely, you may see a green, C4-shaped package under the motorcycle.

You’ll encounter more weapon variety than in some FPS games, (I’m thinking of BioShock: Infinite.) and they feel just right. Grab an SMG and you character hunches up a little as he stormtrooper-moves forward, spraying fire all around. Get a shotgun and you’ll trade range for the ability to gib any ganger that gets close. Found the howitzer? Even the robot will complain about its weight.

Whatever the case, the chaos will be glorious. Bullet down bodies, shred cover, and wreck certain interactive elements of the environment. Explosives may even destroy background, revealing hidden goodies. Fire splashes, turning into deadly traps that light up unlucky gangers into human torches. It’s a surprise that you can survive that all, with your paltry 5 health points.

Then again, you get your I-frames when hit, and some enemies drop medicine. Also, Huntdown features checkpoints that restore your health and respawn you in case of death. (Unfortunately, the enemies respawn as well.) They are usually quite reasonably spaced out, and they’re always a welcome sight when you leave a fight with a single point of health left. Too bad you don’t respawn with your guns.

Making the case for boss fights

Funny, because that’s what happens when you lose boss fights that crown the end of every level. It’s a legitimate strategy – supported by level design – to enter a boss fight with a scavenged weapon. And you know what? I like the boss fights in Huntdown, even when I die in them time and time again. They don’t feel unfair even when they’re difficult. If you can learn the boss’s pattern and move fast enough, you may even survive them in the first go.

Deus Ex made me believe that we have outgrown boss battles as a concept, but for Huntdown, I’ll make an exception. 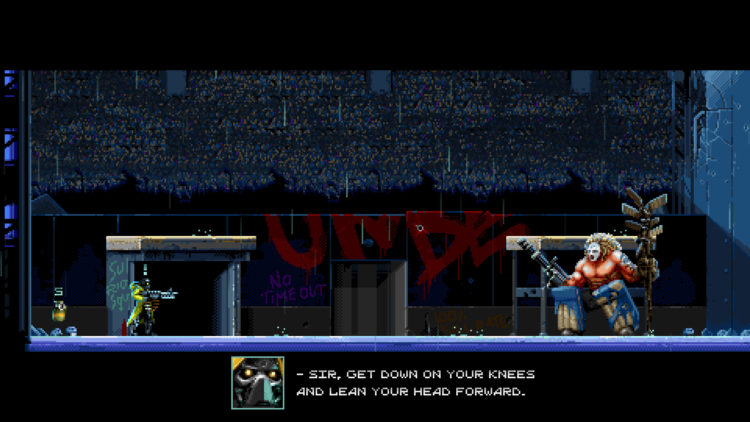 Yet for some reason, he did not.

Huntdown doesn’t go the Metal Slug route and let you fire up or down. Left or right – you have enough difficulty with that. I guess this limits the creators a bit, but they do a great job with the axis they have. This goes for both level design and the boss fights.

And oh my God, is this a beautiful game! Huntdown is filled to brim with excellent pixel art, from era-appropriate super cars that the bounty hunters ride to level backgrounds that feature a straight up unhealthy level of detail. I’m sure that fans of the genre – whether it’s cyberpunk or action movies – will find a tastefully hidden Easter egg or two.

The audio is no slouch. There’s a huge load of voice acting, both for the gangers and our anti -heroes. If it can be voice acted, it will be voice acted, and it’s amazing. The sounds effects work well too, and your guns always sound appropriately to their type. Can’t say anything bad about the music either. 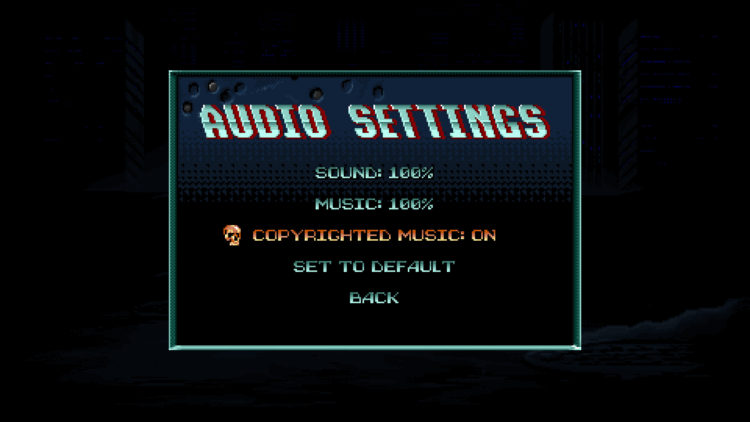 Gotta love the “YouTube is the devil” audio setting.

If I should offer some criticism, it would be for the control scheme. As they’re set out, they’re not great for a single player game, and even after rebinding them I find myself using the wrong buttons. And the default keyboard setup for hotseat multiplayer makes no sense. Get yourself both a friend and a gamepad.

All in all, Huntdown is a hearty recommend, especially considering its low, low, ridiculously low price at the time of writing. And damn it, the game is worth it. I’m a man who loathes to admit a bit of nostalgia, but Huntdown is forcing my hand here. It’s like the Platonic ideal of an ’80s action movie.

Hunt down Huntdown as fast as you can, because this game is just concentrated action movie goodness delivered straight into your veins.

Loba struts into Apex Legends with style and thieving abilities