This year’s Xbox Live ‘Summer of Arcade’ season is turning out to be quite divisive. Our man Tim McDonald enjoyed his time flashing back to the days of the Amiga in Deadlight, but other publications weren’t so grabbed by its other worldly charms. In a reversal of that affair, Tim didn’t exactly love Wreckateer, while other places went nuts for it. Dust: An Elysian Dream stars anthropomorphic animals so it’s pretty much a given that the internet will have mixed views about that one.

Hybrid is unlikely to alter this trend. 5th Cell’s foray into the Source Engine powered world of jet-packed warriors and particle physics (no, really) managed to quite literally divide its audience on release day. Those who’d grabbed the game before its servers got clogged with digital soup were eventually able to play (once the troublesome hosting equipment had been rinsed off), but everyone else was left gazing at an empty space in the Xbox Live marketplace after Microsoft temporarily pulled the title. Intermittent server issues have continued to haunt Hybrid during my time with it; from some lengthy matchmaking waits to curious lag effects in matches, and further periods where the servers were completely offline. 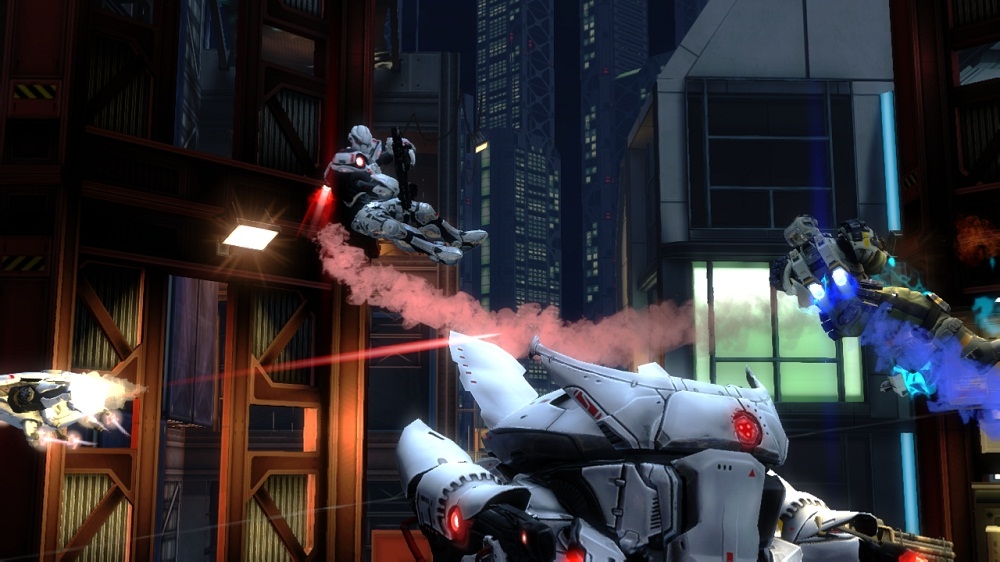 That’s a bit of a problem for a multiplayer, online-only title and I can’t even begin to imagine 5th Cell’s frustration at Microsoft’s inability to keep their own servers up (from what I can tell, the servers are indeed Microsoft’s responsibility) for a promoted Xbox Live Arcade title. Multiplayer audiences are fickle, fragile things and even though the server issues will inevitably settle down, many people may not be prepared to wait that out.

Once they are able to play, prospective jet-propelled soldiers will find a third-person cover shooter unlike any other. 5th Cell deserves a lot of credit here, for introducing a new, fluid style of play to a tired genre and squeezing innovation from an unlikely source.

Let’s start with the basic set-up. Australia has been destroyed by a Large Hadron Collider accident (sure, why not) and now Earth’s reality has run into that of an alien race. As a result, Variant (that’s the alien chaps) and Paladin (the human rebels) factions fight to control the planet. Securing regions of the globe, by playing and winning multiplayer matches, will earn your faction ‘Dark Matter’ which I guess can either put Australia back together again or plunge Earth into Variant hands forever.

Aside from cosmetic differences, both factions are essentially the same to play. The starting weapon sets differ, but all weapons can ultimately be unlocked by both sides. 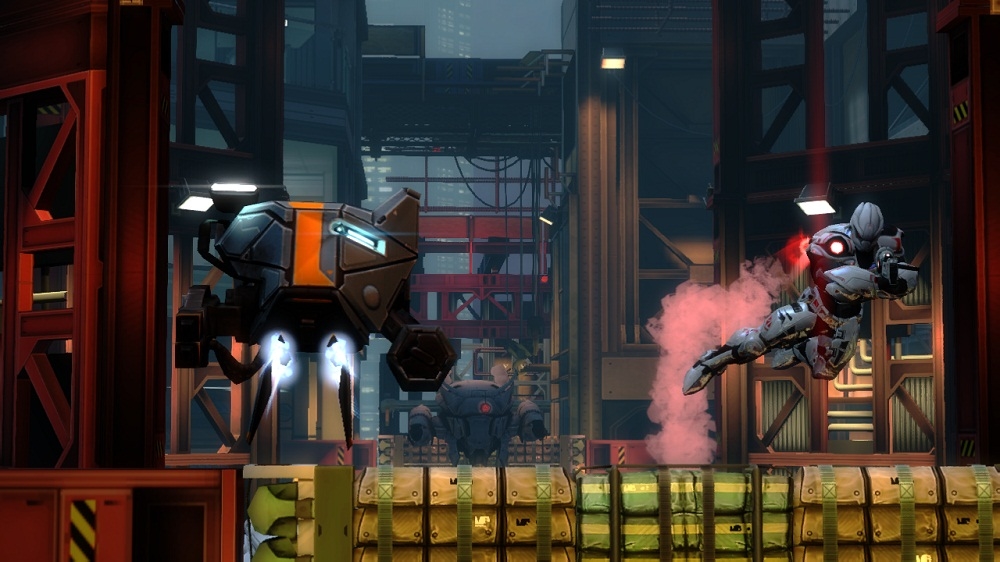 The game’s impressive trick is to take a shooter’s usual movement principle (fully player controlled) and make it a little more abstract. In Hybrid, a tap of the A button while aiming at one of the clearly defined cover barriers will send you jet-packing off towards it. Mid-flight, you’re able to retreat back to where you came from (with B), point at another barrier and head there (again, with A) or boost and strafe through the air as you approach and land at your intended destination.

With matches in every mode restricted to 3vs3, it ensures that battles are tight, compact affairs with a great deal of fluidity of movement (helped by the excellent 60fps frame-rate). Constant movement in Hybrid is unwise, as you’re rather vulnerable in the air; but cowering behind cover is just as foolish because it’s simple enough for foes to hop behind you. With cover barriers on walls and ceilings as well as floors, survival is a balance between staying alert to where danger may come from and preparing to move quickly if your position becomes compromised or a better one opens up.

Ideally your two team mates will doing the same, and matches tend to be most rewarding when the three of you are able to work together to cover lanes of attack and complement one another with weapon/ability load-outs. With strangers, this is a bit of a crapshoot, so Hybrid definitely favours squads of friends. It’s a shame the game doesn’t allow private matches, because it significantly reduces the chance of two friend-squads finding and engaging one another in a satisfying fight. 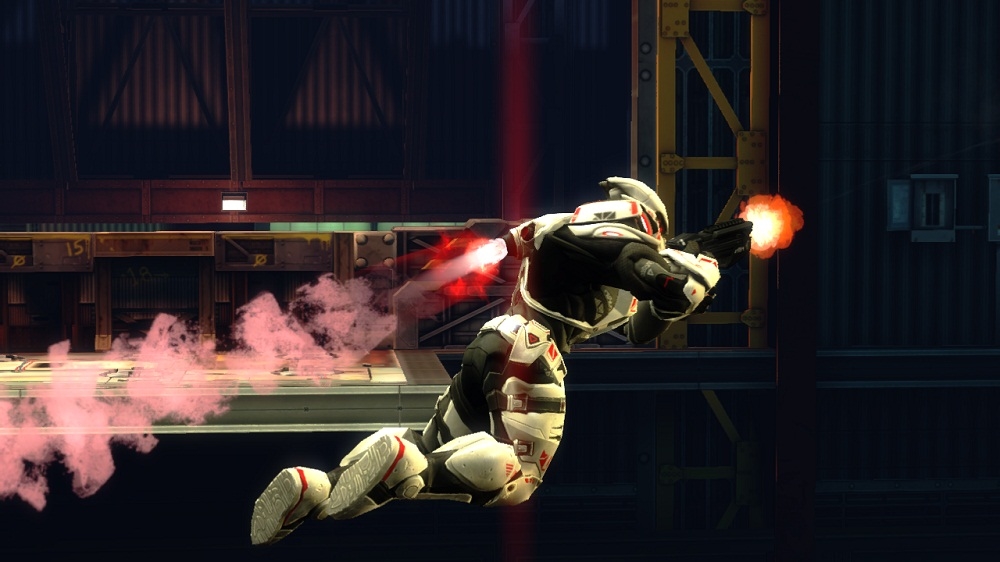 Innovation can only stretch so far, so it’s no surprise to find Hybrid applying the standard multiplayer perks/levelling trimmings around its clever central concept. These (like the Satellite ability, which allows your team to see the opposing positions for a short period at the cost of picking a more offensive power) tend to be smartly designed, and the guns feel well-balanced for a variety of situations (no over-powered snipers here). The layer upon layer of perks, abilities, specializations and global meta-gaming can feel at-odds with the general simplicity and speed of the main game, but they do all have a role to play and it pays off to experiment with load-outs.

What does feel a little like feature-bloat is the addition of drones, which can be summoned in combat after kill-streaks. It’s still down to a player’s tactical nous when to fire off these drones, but having AI-controlled bots cruising around already compact arenas feels a bit superfluous to what should really be pure 3vs3 contests. They also make dominant teams even harder to dislodge, which does little for the competitive balance of Hybrid’s quick contests. The option to play drone-less matches would’ve been a welcome one.

Slightly more control over game mode selection might have been nice too. You can narrow it down to a selection, but thanks to this community’s apparent natural affinity for basic Team Deathmatch you’re likely to end up playing that unless you opt for the category set that excludes it. Sadly, this category also excludes other modes, so the chances of ending up with a game of, say, ‘Artifact’ (which sits in the same category set as Team Deathmatch) are slim. 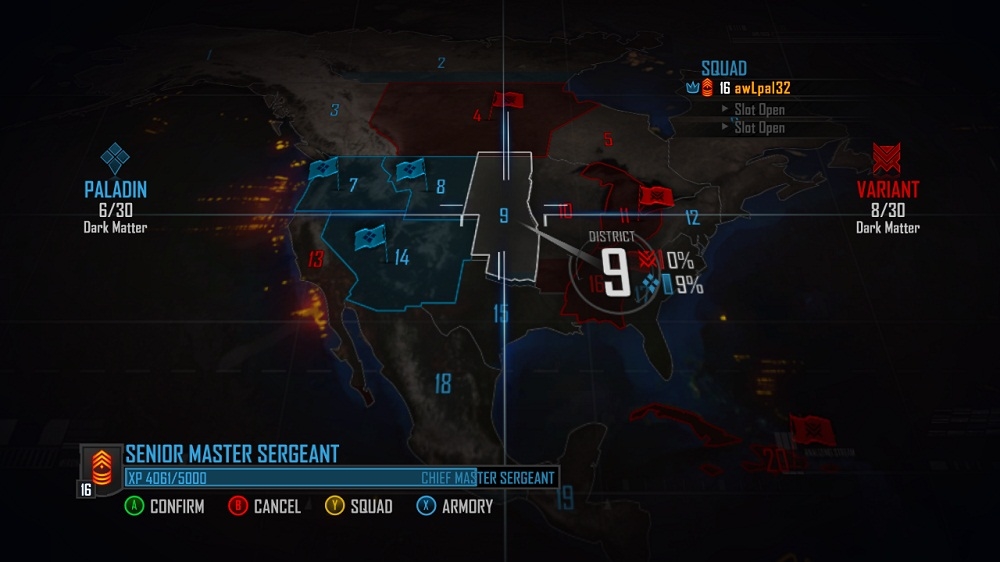 The ten or so maps do their jobs well enough, but are so indistinct in character that even after a few days of play I’m still not entirely sure what distinguishes, say, ‘Warhead’ from ‘Refinery’. This is perhaps because the game necessitates such a laser-like focus on where barriers are that there isn’t much opportunity to take in local scenery beyond the basic map shapes. I ended up recognising the arenas as “the one with the central killzone” and “that one with flowing, circular battles” rather than by name.

When everything snaps into place with Hybrid it feels like a novel twist on the third-person shooter concept. A match with evenly balanced teams on a map suitable for the mode of play selected can be tense, tactical blast. But reaching this point involves a lot of variables, and quite often you’ll be spending too much time gazing at the lobby loading bar or being thrust into an imbalanced match on a map you don’t especially care for. On a conceptual level Hybrid stands out as an above-average shooter in a packed genre, but its reality is dogged by inconsistent matchmaking, server problems and an inessential devotion to some contemporary multiplayer fads. Seeing its true potential one match in every three just adds to the frustration.