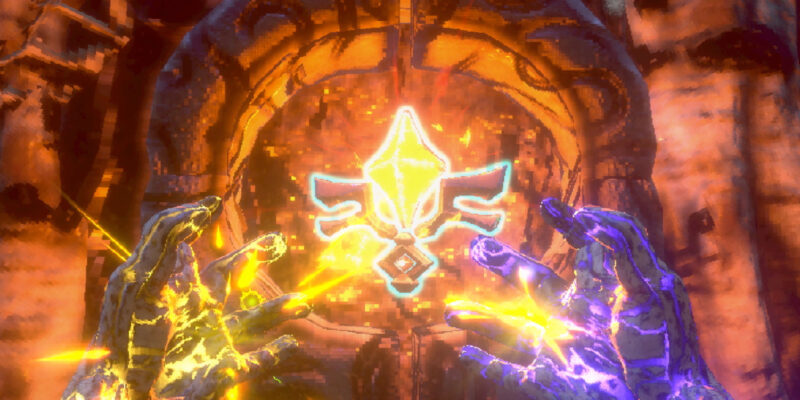 Another title revealed during the Xbox show at gamescom 2021 was Into the Pit. This fast-paced roguelike gives off a strong Doom feel. But instead of big weapons, there’s a whole lot of magic being thrown around. The Into the Pit reveal trailer also informed us that you’ll be able to take control of the magical hands when the game releases on October 19.

The premise for Into the Pit is loaded with mystery. You come from a family of lore-hunting mystics. You wander the land following rumors and chasing down leads of occult power. Your cousin, Luridia, goes missing after discovering a demonic pit in a remote village. Now, it’s up to you to find out what went wrong.

For starters, I would say messing with demonic energy is a bad idea. But protagonists are never ones to shy away from danger. Upon reaching the village, you find the hamlet has been overwhelmed by dark magic. As you continue to search for your cousin, you’ll also need to rescue villagers, grow your powers, and, you guessed it, delve into the pit.

As you can see from the reveal trailer above, Into the Pit allows you to wield a combination of spells. I imagine the different colors represent different elements or types of magic, some of which will be more effective against certain enemies. You’ll be able to experiment with numerous arcane attacks and powers to become a force of nature. You’ll also be able to unlock permanent upgrades by rescuing villagers. To thank you, they will open shops that give you access to said upgrades.

Levels are short but fast-paced. Again, much like Doom, some manner of demonic nasty is always trying to run you down and tear you apart. Horrors are waiting around every corner, so keep your guard up.

You can already add Into the Pit to your Steam wishlist.

The Bouncer class, Sonic, and an Autumn event are coming to Phantasy Star Online 2: New Genesis

New trailer for The Gunk shown at Xbox gamescom stream