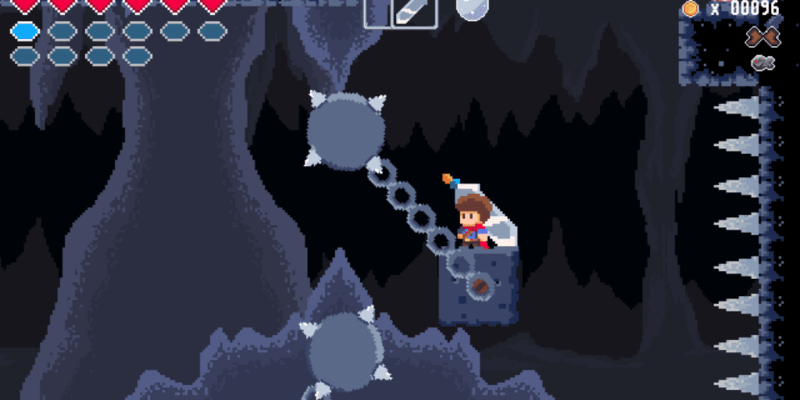 It isn’t easy to make a good Metroidvania. They require planning and just enough focus and signposting for the game to be fair and rewarding. JackQuest is a short entry in the genre that doesn’t really try anything new. But it does make some rather surprising missteps along the way.

The game starts with the protagonist, Jack. He’s about to confess his love to his friend Nara when she’s abducted by a giant, green hand from below the ground. Just what we need… more games where a girlfriend is kidnapped and needs rescuing. So, not the greatest start.

Jack follows the hand and stumbles upon a talking sword named Kuro. Kuro requests that Jack take him and use him to get Nara back. The game is misleadingly subtitled The Tale of the Sword, but the story is absolutely not about a sword.

Visually, JackQuest is decent for the most part, albeit generic and kind of bland. The sprites look alright and animate well, but they lack detail. The entire game takes place in a generic cave and has nothing that hasn’t been seen before in other games. Enemies include bats, spiders, and slimes that all look and behave as you’d expect. Practically everything feels generic, familiar, and lacks imagination. 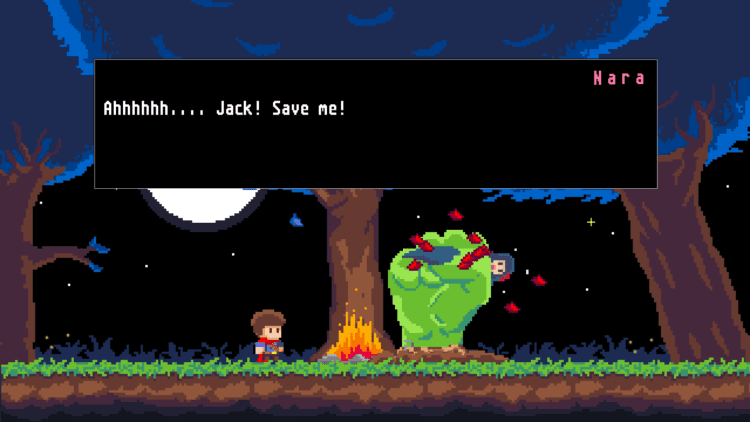 JackQuest‘s gameplay is exactly what you’d expect from a Metroidvania. It’s a sidescroller where you explore a cave in order to find two keys. Once you get these keys, you fight the final boss and save Nara. Credits roll.

Jack has two weapons, the aforementioned sword and a bow with infinite arrows. He also has magic gems that enable special attacks. The sword has a powerful spinning move while the bow launches Jack forward with brief invincibility.

The combat feels good enough, but not particularly fun. Similarly, the platforming works but is unoriginal. Jack starts the game with the ability to wall jump and later picks up a double jump. The jumping is a bit floaty, but it’s easy enough to control. These platforming sections aren’t particularly difficult, either. There are the usual assortment of spike pits and revolving traps along with a couple of brief underwater sections. As you might expect, there are heart containers and gems hidden in walls you can jump through. 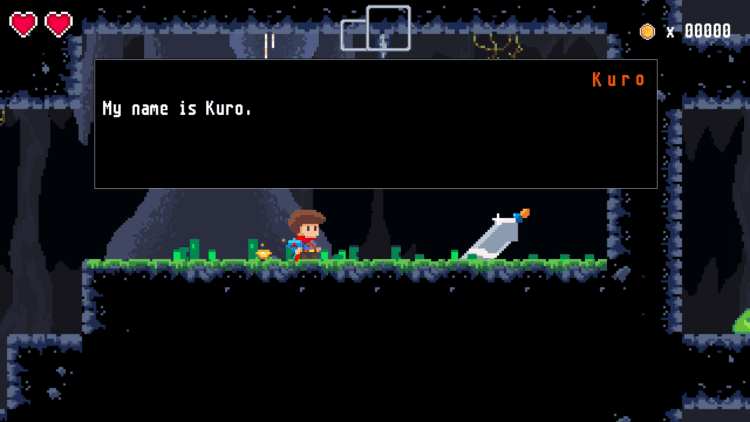 But the game’s biggest problem isn’t its mediocrity, it’s the insanely stingy health system. Every hit takes away half a heart, and potions heal the same amount. There are only two ways to get these potions: you either find them in boxes or purchase them from a merchant.

But potions are incredibly expensive. Even after saving every penny I could find throughout the game, I had just enough money to fill up my life bar once. This was a cause of immense frustration, especially when I got stuck at an autosave point with half a heart right before a boss fight. Luckily, I accidentally found a secret heart container.

The game would be much less infuriating if health were refilled at save points, if enemies dropped health, or if purchased potions healed you entirely. But as it is, the health system in this game is completely broken.

Enemy placements make the problem worse. There were times when I got hurt by enemies that were literally impossible to see. An offscreen bat could be in your jump path, resulting in damage. Another section dropped me down a narrow passage that landed me right on top of some skeletons. I was basically forced to constantly save and reload so that I could scout new areas out. 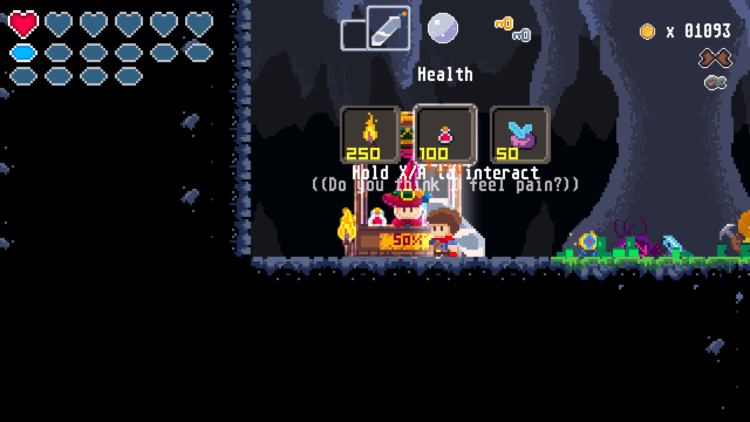 With prices like these, it’s no wonder you operate out of a fucking cave.

Then there’s the signposting. You get a horrible map partway through the game that’s practically featureless and only lets you look at a tiny portion at a time. No, it doesn’t let you zoom out. Plotting a course to where you’re supposed to go is technically doable, but obnoxious.

However, there is a point where the map simply becomes useless. In order to obtain the second key, I needed to get into a room with no obvious entrances. After looking all over, I was forced to give up and ask the devs for help. They showed me that the only way forward was to find a secret passageway behind a wall. That sort of thing is fine for bonuses and secrets, but they should never be part of the main path. I might have never found it without being explicitly told.

The handful of boss battles in JackQuest are passable, if unmemorable. That is, except for the final one, which was a total pushover. You can totally cheese it by staying on the left side of the screen while jumping and shooting arrows. Once you beat him, there’s a brief bit of dialogue and then the game ends. Although it was anti-climactic, I was honestly glad it was over.

All-in-all, JackQuest only takes two or three hours to beat. After that, there doesn’t appear to be any replay value, save for speedrunners who love mediocrity. As a whole, JackQuest is an okay game that’s wrecked by a horrible health system and crummy map. But even if those were fixed, the game would still struggle to stand out in a crowded genre.

JackQuest is a very average game held back further by questionable design decisions. It's not necessarily a bad time, but it isn't a good one either.