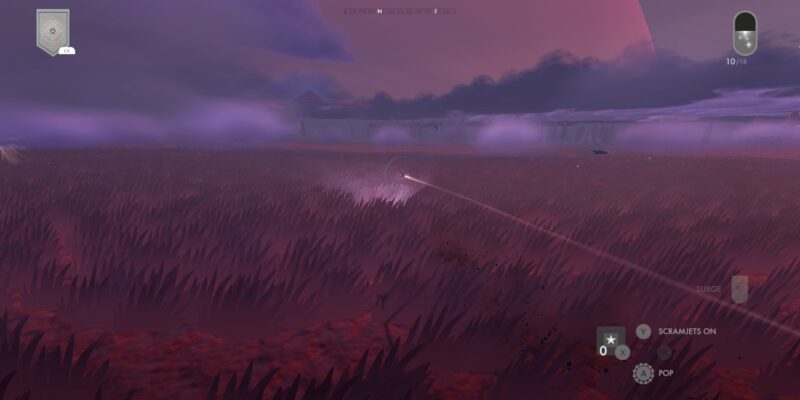 Jett: The Far Shore is the rare kind of game that managed to surprise an old, jaded player like myself. I first took it as both an exploration and narrative game. And it certainly is both of those, but it’s also something more. Jett is a story of humanity and its place in the vast universe, told through the experiences of a handful of scouts who left behind their home and everyone they’ve known and loved. Lured by a signal called the ‘hymnwave,’ they travel through the vastness of space to reach an ocean world of myth: ‘the far shore,’ a place of mystery and danger.

Jett manages to pack a lot of lore into a small package, but I never felt overwhelmed. The story is drip-fed organically through the many conversations you have with your fellow crewmembers and co-pilot Isao. You learn of the hymnwave (which disclosed the existence of the far shore), and of humanity’s 300-year journey to build a ship that can reach its source.

I can’t help but appreciate the care the developers took to not knock you over the head with Jett‘s narrative. It unfolds naturally, as opposed to having someone stand around and exposit for minutes on end. Of course, there are archives you can read in the home base if you have a desire to fill in any missing pieces.

You experience Jett: The Far Shore in two different ways. The first has you, as the protagonist Mei, skimming across the far shore in a speedy ship called a jett. You fly in third-person view just above the surface, taking in the planet’s sights and inspecting its various flora and fauna, documenting their type and behavior. Outside of your jett, the game moves the camera to first person as you explore the planet’s surface or wander the home base and speak with your fellow scouts. 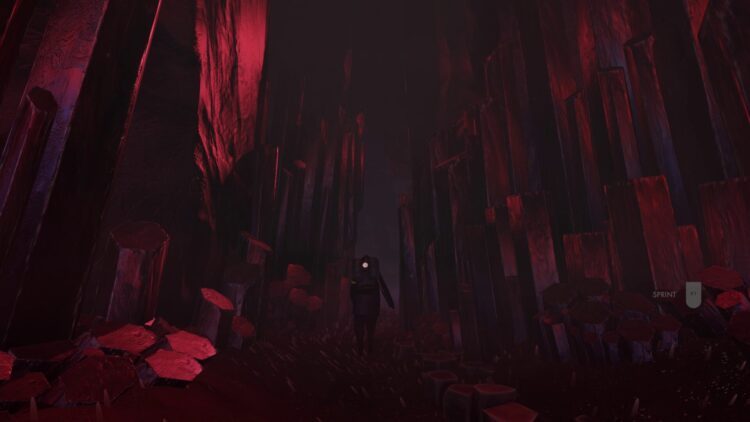 The first-person sequences get you up close and personal with your new, alien home.

It took only a short amount of time for me to get used to flying the jett. Of course, that was only after I had ping-ponged off a few trees and hills, briefly stopping to let my shields recharge. But once I got the hang of it, flying the jett was enjoyable and breezy. Your speed is managed by utilizing your scramjets — which is like an afterburner of sorts. Sparkling vapor seeping up from the planet’s surface can be harvested, allowing you to stabilize your scramjets and prevent them from burning out. While Jett is a mostly meditative experience, keeping an eye on your scramjets while watching out for potential hostile life keeps things from growing dull. You can also ‘pop’ the ship skyward in order to avoid large obstacles.

I didn’t mention weaponry, but that’s because you don’t have any. The scouts view the far shore with reverence, and it’s clear they consider their presence as something like an invasive species. Discounting the home base, they keep their footprint small. In the rare moments when they must deal with the planet’s more belligerent creatures, they express remorse following the struggle. There are some clever ways to avoid battles, though, like using your vapor tank to create something like a smokescreen to make a hasty escape.

It’s honestly quite refreshing. I’m almost always down for a good dust-up with alien beasts. But hearing the concern in the voices of my fellows following such fights, I couldn’t help but share in their guilt. 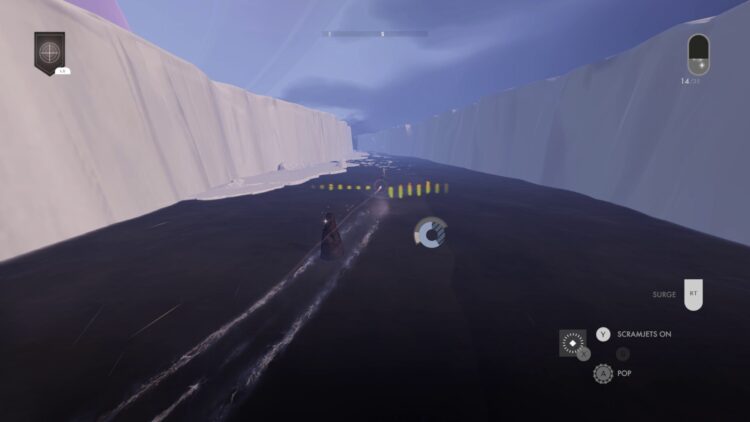 The far shore has many biomes, from grassy plains to frozen lands.

Between some missions, you return to the home base. There, you’re able to stretch your legs and chat it up with the others in your crew. Over time, you’ll get to know each member and their individual personalities, along with their hopes and fears. These are people who left everything they knew behind, joining thousands of others aboard the vast Mother Structure ship that took more than 1,000 years to reach its destination. The story is buoyed by excellent writing, even if some of the dialogue choices are minimal.

Still, I was fascinated by their society: a harmonious blend of religion and science. They greeted each other with slight head bows and steepled hands. I also got to take part in something called a ‘tsoultide.’ From what I could gather, it consisted of humming a song over bowls of noodle soup. I can respect that.

Jett‘s developers created a world with notable depth, from its cast of characters to the environment. The far shore itself at once feels familiar and undeniably alien. Soft hues blanket the world around, from its rolling crimson grass and trees to the azure, tumultuous ocean. In the distance, angry black clouds crackle with red lightning. And above all is Tor, a colossal mountain in which lies the source of the hymnwave. 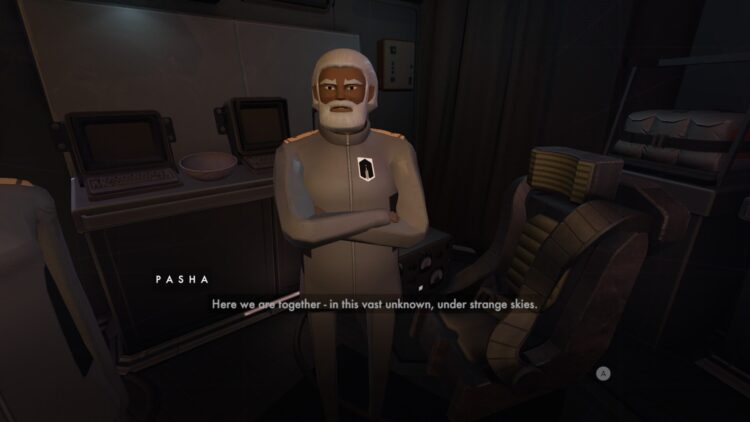 You occasionally get to chat with your crewmembers, even if Mei doesn’t have a voice.

Jett: The Far Shore does have some issues, though minimal. Character animations aren’t exactly the smoothest, and models are a bit blocky — but that could be chalked up to artistic design. The first-person controls are also incredibly finicky. You need to tap or hold buttons to perform an action, but the game isn’t always clear on when to do either. The game won’t register a button press if  you’re too close or far away, forcing you to dance around until you find that perfect spot it wants you at.

The game’s third-person controls, however, are thankfully smooth. I tried it at first with a keyboard and mouse before moving to a controller. Honestly, I found it perfectly playable with either scheme. Ultimately, I preferred using the controller as it made handling the jett feel more natural.

As you fly around the far shore, your fellow crew members talk to you. They don’t speak English, however, making it a challenge to follow along with the conversation while also trying not to careen into objects. But that’s really more of a nitpick from me. I really don’t want to miss out on a conversation, but sometimes trying to avoid the wrath of an angry Shock Serpent is a bit more important at the time. 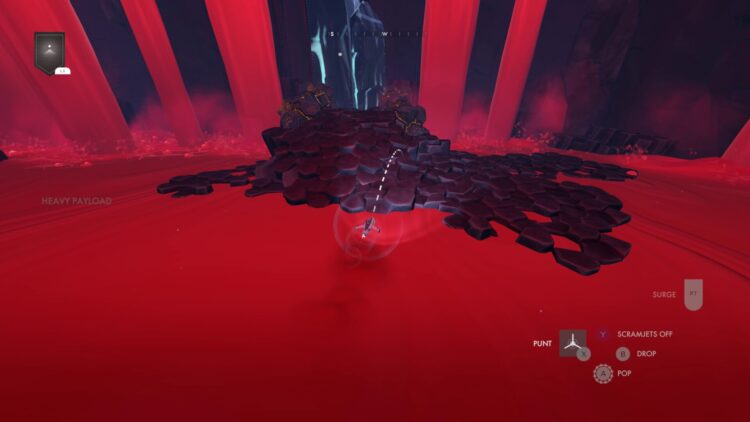 There are some puzzles to solve, but they’re not complicated.

Small issues aside, Jett: The Far Shore is a fascinating and engaging experience. The game tells an alluring story of human endurance, with believable characters supported by skillful writing. Running at around eight hours, the game doesn’t overstay its welcome. However, a part of me wishes the developers pushed the game’s runtime a bit further, allowing me to explore the world they crafted. Regardless, I walked away feeling satisfied overall. My time with the game may have been shorter than I’d like, but it’ll occupy my memory for days to come.

Jett: The Far Shore deftly blends exploration and narrative elements, telling a story of struggle and hope against the odds. Small issues aside, the game shines with great writing and believable characters who press on even as challenges arise.

Alan Wake Remastered — Is it worth it?

By Andrew Farrell17 mins ago
Reviews

Inscryption review — a rogue-lite with a twist

By Joshua Chu1 hour ago
Reviews

By Damon Apelt3 days ago
Reviews