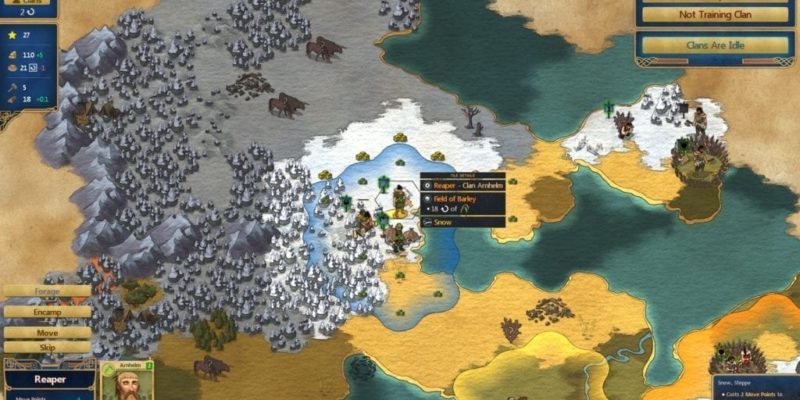 Jon Shafer’s At The Gates has seemed enticing these past few months. One of Civilization V’s designers, striking out on his own to craft a brand new 4X title that promised more depth and strategic layers than the genre’s more streamlined games? How can you not be excited, right? Sadly, the apparent potential hasn’t been met, thanks to a slew of both minor and major problems. 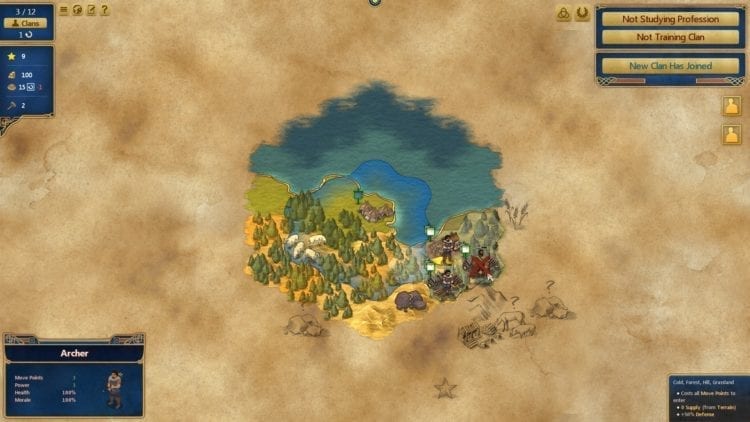 Start a new game. See three hostile clans right next to my settlement. Go back to main menu.

The main goal of Jon Shafer’s At The Gates is to supplant the Roman Empire. Historically, the western and eastern halves were assailed by nomadic barbarian tribes — hence, “barbarians at the gates.” In order to do this for yourself, you’ll have to build your tribe and eventually form a kingdom.

Once you’ve found either the Western Roman Empire or the Eastern Byzantine counterpart, you can either conquer it via military means or wrest control from within by becoming Magister Militum and turning your own folk into legions. The former is basically akin to reliving the destiny of Attila, Genseric, and Brennus. The latter is actually how Flavius Stilicho, a half-Vandal general, became one of the most powerful men in the world at the time.

Like a number of strategy games, getting there is no easy feat. In fact, this is perhaps At The Gates’ greatest strength: a simulation of sorts on how nomadic migrations ended the dream that was once Rome. You’re given only one settlement, that’s it. You can move this settlement around freely (unpacking it turns your camp into a settler of sorts). The reason for this is because the randomized game world will only have a finite amount of resources. Once those resources are gone, it’s time to pack up and move on like nomadic tribesmen of yore. You can even jot down messages on tiles to denote the resources and what you’re planning ahead for your expansion.

All around you are rival tribes and nomadic clansmen (these ones are always hostile, like Civilization barbs for actual barbarians). For the rival tribes (or Civs) such as Huns, Celts, Alemanni, and the like, you’ll unlock them for playthroughs when you conquer or ally with them. For most of the game, you’ll have to navigate your surroundings, taking care that once winter hits you’ll be low on supplies and some locations are completely blocked. 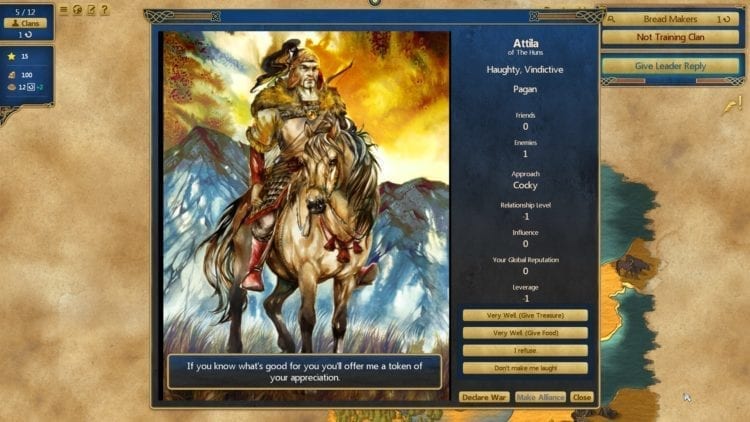 Another key difference in At The Gates is its focus on character-building. Remember 4X games like Civilization or RTS titles like Command & Conquer and StarCraft? Notice how you’ll almost always have just one gatherer or builder-type unit? That unit can gather anything or construct anything you’d want.

In At The Gates, that mechanic is thrown out the window in favor of clans. Think of them as citizens that have their own unique traits. Each clan can only have one profession at a time and you’ll unlock more as you research them. Likewise, each profession has a certain resource gathering quirk or a resource booster mechanic tied to it. For instance, the Reaper profession can only gather wheat and barley. Meanwhile, Diggers can gather minerals and Woodcutters can cut down surrounding forests. These are all active professions that require your clan/characters to be outside your settlement. Other “settled” professions merely require them to be in the settlement to provide boosts (ie. Glasscutters, Bards, and the like).

Apart from professions, clans also have desires. Some might want to stick to a specific profession. Going outside their comfort zone might mean a loss in morale or no experience gains. They also have their own traits such as being prone to feuding with other clans, getting their training time doubled (or halved), or not being able to attack. 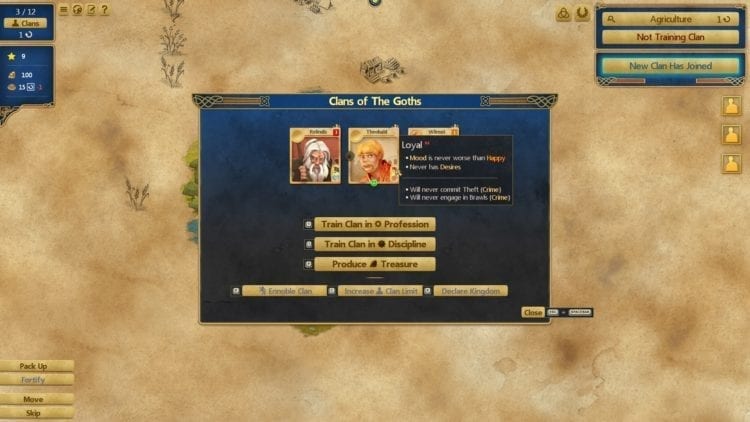 The clan system, one of the unique features of At The Gates.

These randomized elements that turn At The Gates into a 4X strategy and roguelike hybrid are more trouble than they’re worth. You start out with three clans and gain more as you expand, and all their traits are random. You can have clans with major bonuses (such as professions already learned) or end up with useless rabble. It’s also possible to have clans which have major boosts for a certain profession tree, but they’d only gain experience points if it’s a “social profession.” For instance, one of my characters likes Metalworking jobs, but he only gains experience points for the “social” kind, and these aren’t even available early on.

It becomes annoying and downright frustrating as well given that a number of professions feel redundant. At the start, the game advises you to train an Explorer so you can discover your surroundings. Unfortunately, they don’t do jack squat outside of having increased movement points and finding stuff in ruins. A related profession you get a turn afterward, the Surveyor, can build roads and identify resource deposits. Why not just combine both?

The deeper you get in the tech tree, the more you see that a number of professions might not even be worth it. With your limited resources and clans, and randomization in play, some streamlining is in order. Oh, and I almost forgot to mention that you can only research one profession at a time, and train one settler at a time. 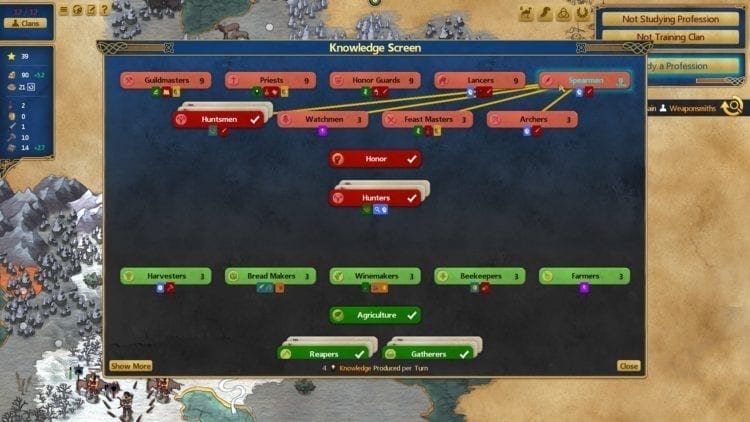 The research/tech tree has a number of redundant professions, and you’re limited to committing to one at a time. The same goes for training your clans no matter how much your fame grows.

Complexity For The Sake Of

I truly understand what Jon Shafer wants to achieve here. Strategy games have had streamlined mechanics for some time which might disappoint fans of the genre who want to have more depth. Don’t get me wrong either, because I do love complexities in the games I play — such as the features you’d find in Paradox Interactive’s titles. Unfortunately, At The Gates seems as though it tries to be complicated just for the sake of it.

Even worse are the number of bugs and questionable design that can plague your playthrough. I played the game before and after it launched. Here are some issues I encountered: 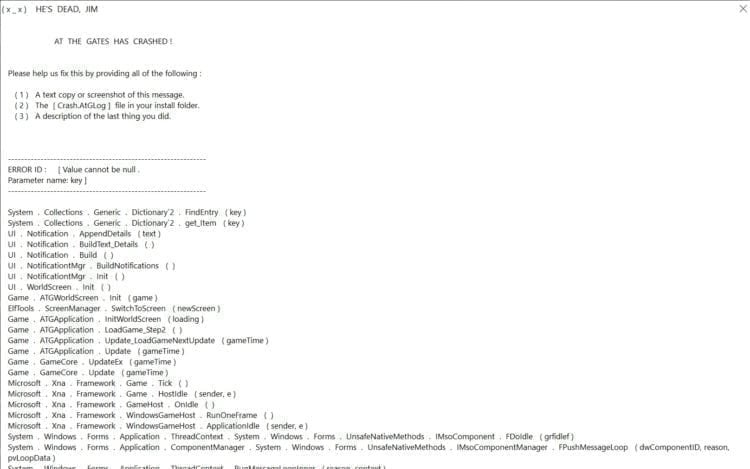 Now the game won’t even load, but hey, there’s a Star Trek reference!

Close Those Gates For Now

Overall, At The Gates had a lot of promise. There’s a tried and tested formula for a successful 4X game or a roguelike. Jon Shafer tried to blend both, mixed it with some additional mechanics and RNG, coming up with a combination that just does not make for an enjoyable romp.

It’s a shame given that the watercolor art design is beautiful and the core mechanics themselves are unique. With a few more tweaks and some fixes, we could have another strategy game that’s worthwhile. As it stands, this is one that’d make you want to keep the gates locked and throw away the key… for now, at least.

Jon Shafer's At The Gates

In spite of having unique mechanics and a fresh take on the 4X and roguelike genres, Jon Shafer's At The Gates falls woefully short of delivering on both counts with frustrating RNG mechanics, unintuitive design, lackluster AI, bugs, and crashes.

By Nicholas Montegriffo1 hour ago
Features

By Jason Rodriguez9 hours ago
Features

By Jason Rodriguez3 days ago3
Features

By Robert Workman4 days ago0
Features

By Andrew Farrell5 days ago0
Features