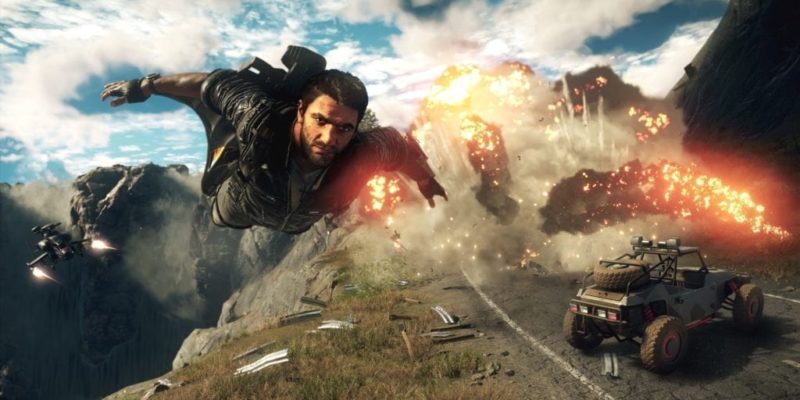 I’m not sure how much further Avalanche can push the Just Cause series after Just Cause 4. Of course, I wondered much the same with Just Cause 3. It turns out that the answer is “make the tethering system even more ridiculous and add weather.” There’s some mixed success with this solution, but I can at least say I haven’t laughed this hard at a game in some time.

Just Cause 4 sees series protagonist Rico Rodriguez (better known to long-time PC Invasion readers as Dave Scorpion) off to the island paradise of Solis, home to the Black Hand – the omnipresent mercenary group that’s popped up in pretty much every Just Cause game so far. This time around, it turns out that Rico has some previously unknown ties to the group, and so now he has to go and shoot all of them. Or blow them up in a spectacular fashion. Or tether them to planes and fly off, and then parachute out at peak altitude. Or… 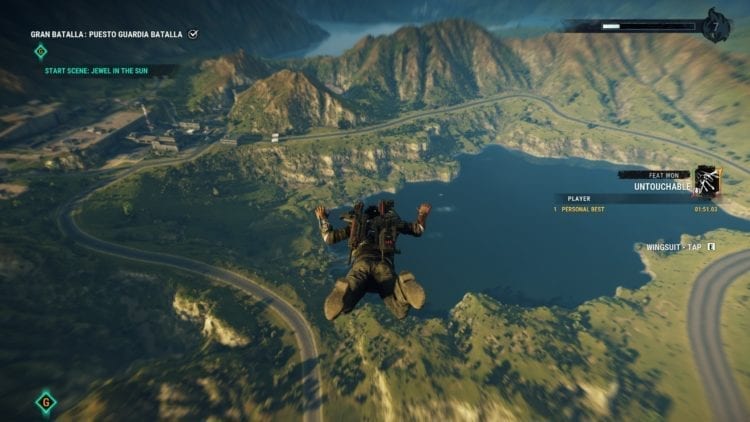 Wingsuiting across the beautiful landscapes never gets tiring, especially as it requires some actual skill to stay aloft.

If you’ve played a Just Cause title before, the gameplay is immediately familiar. You’re in a beautiful sandbox world with a parachute, a wingsuit, and a grapple claw. You can hijack any vehicle, shoot any gun, and tether anything to anything. Usually, this is in pursuit of creating the biggest and most cornea-searing fireball you can.

This familiarity works both for and against Just Cause 4. On the one hand, it means it’s very easy to just hop in and pick up the new stuff. On the other hand, it means that the creeping sense of been-there-done-that hits a lot faster than it otherwise might.

For the most part, the latest game feels a lot like Just Cause 3, and the improvements and additions don’t actually improve or add much. Solis is a beautiful nation for sure, with biomes spanning grasslands, lush jungles, Arctic mountains, and blistering deserts. There are plenty of new guns to use, but most are a tad disappointing. The lightning gun, for instance, sounds amazing on paper… but it feels kinda like a long-ranged video game flamethrower, gradually sapping health away from a distance. It’s a bit of a step down from the Bavarium nuke launcher of Just Cause 3. Then again, its alt-fire does involve lightning grenades and some of the special vehicles are really spectacular, so hey. 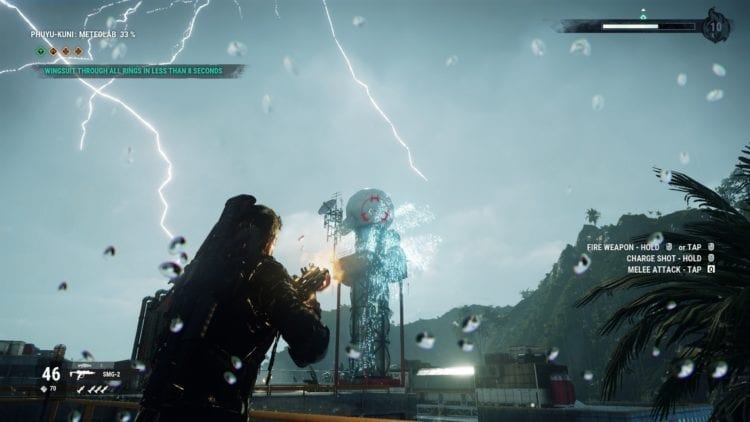 Surviving lightning largely revolves around “don’t hang around in one spot for too long”, but watching everything around you get fried is always entertaining.

Likewise, the much-vaunted weather system rarely makes an appearance. The game builds towards Rico’s assault on Project Illapa, a mountaintop fortress protected by a number of weather control devices, and your progress in each region is casually guided by missions to disable each of the devices. There’s a sandstorm generator, a lightning storm generator, and a tornado generator to deal with before your final assault, and each is set in a different region of the map. But, alas, you won’t really be seeing those sandstorms/thunderstorms/tornadoes until the final mission of each section unless you venture into the protected regions earlier. They’re impressive for sure, and I highly recommend trying to parachute around a tornado or dodge lightning strikes (assuming the latter won’t give you Final Fantasy X flashbacks) but they very rarely have an impact on your gameplay.

This is a freeform game, however, and you’re can pursue objectives in whatever order you like. Starting from one region of the map, you work to raise the Army of Chaos and spread your influence across the entire island. Most missions require particular zones to be liberated first, and it’s your choice where you want to send your troops.

However, this isn’t a micro-strategy layer: the more chaos you cause (read: the more shit you, uh, encourage to erupt into flames), the more your army swells. Once you have a couple of spare squads, you can send them in to secure a region, and then more stuff is available. You don’t have to worry about counter-attacks or wise deployments. You just click a button on the map when you have the option, and a new zone is under your control. One neat feature of this is the “frontline”; at the borders of your territory, your troops are in a constant battle with Black Hand soldiers. While things may be secure in your zones, the borders are a constant source of conflict. 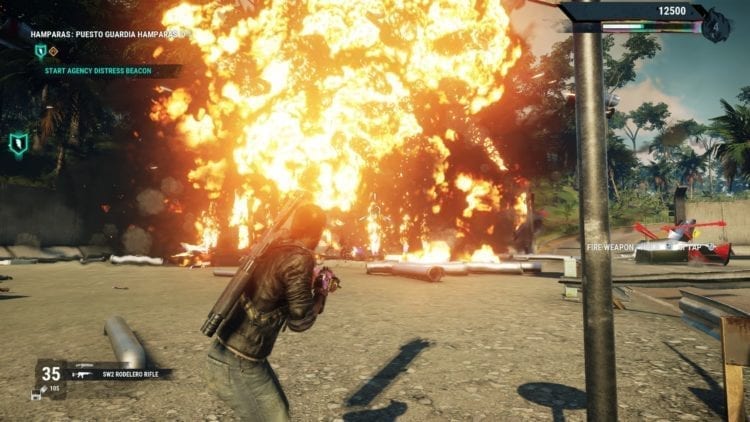 I can’t believe I’ve made it this far into an article about a Just Cause game without a picture of an explosion.

That said, some zones require missions to be completed before capture. There are a smattering of different types; you’ll see each one two or three times before you liberate the entire island. Some of these are excellent and genuinely clever while others are incredibly irritating. Escort and defense missions have never been fun, and while they provide a constant source of spawning enemies to deal with, there’s an over-abundance here. Open world mobility is one of the best things about the Just Cause as a series. Having to babysit a transmitter or a hacker while a bar slowly fills up doesn’t encourage this.

On the other hand, missions where the Black Hand has sabotaged a whole load of vehicles near a bay, and you have a time limit to drive as many of them into the water as possible before they go off? That’s actually kind of ace, and rewards mastery of the traversal options.

It probably sounds like I don’t like Just Cause 4, and that’s not true. It’s just that most of what I like is pretty much what I liked about Just Cause 3. The wide-open sandbox of effortless destruction and deceptively clever mobility options are all similar. But there is one truly major improvement. 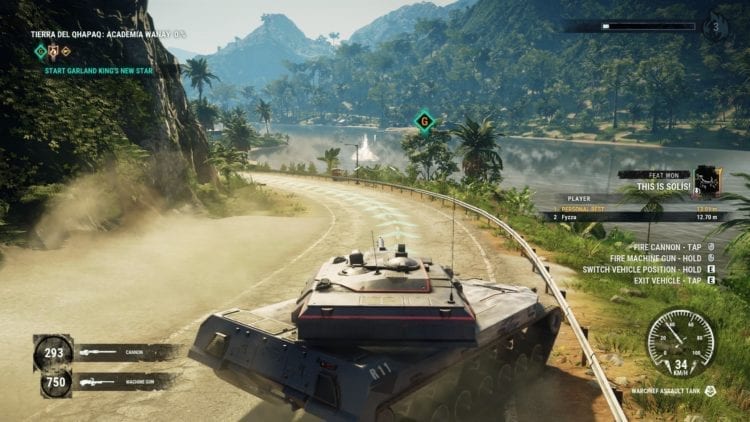 Just Cause 4 is a game that rewards creativity. You can potentially call in a tank via airdrop to easily complete a given mission, and combat is still not particularly fulfilling if you stick to guns or hijacking every helicopter you see. But if you decide to play around with all of the tools, then you’re in for something special.

This is because of the grapple mods system. For the uninitiated: in addition to Rico’s various modes of personal transport, he can tether things to other things. Tie a person to a jet. Tie an exploding canister to a tank. Tie a jeep to a tree, and cackle maniacally as it gets yanked backward mid-car chase.

Boosters, introduced in Just Cause 3, are back: your tethers can be set to ignite and send things flying off in a direction of your choice, letting you turn fuel canisters into jet-propelled missiles. Likewise, your tethers can retract, yanking people or vehicles into each other, or ramming radar dishes into bases. These are joined by air lifters: self-inflating air balloons that lift things upwards.

But the best bit is that all of these have four or five unlockable mods that let you change their behavior completely. 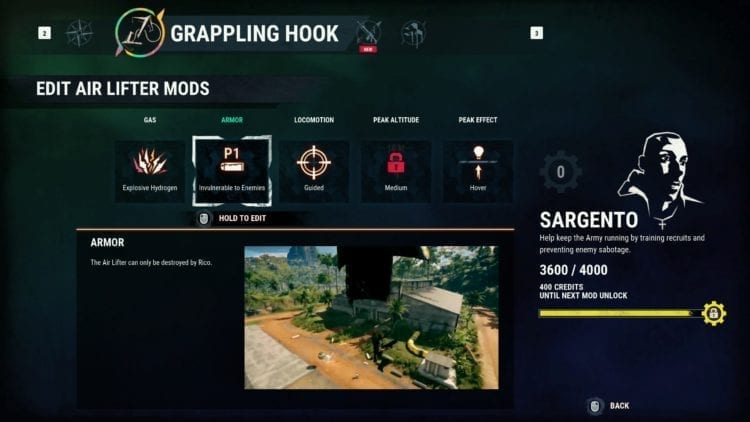 Take the air lifter. It’s technically just a balloon that floats things upwards, but you quickly unlock the ability to make them violently explode when they pop. Other mods include setting the maximum height they’ll rise to. You can make them float towards your crosshairs, dragging whatever they’re attached to with them. Or you can make them invincible, destroyable only by Rico.

The combinations and possibilities of the tools and weapon mods are, if not endless, then numerous and spectacular. As an example: I attached four air lifters to a jeep, set with a maximum height a little way off the ground, and set to float towards my cursor. I also had boosters on the back of the jeep, which I could activate by holding down the F key in case I needed an extra boost of speed. And then, naturally, I tethered four corpses to the side of the vehicle, dangling down from my floating murder jeep.

Yep. I had a floating jeep that telekinetically moved where I was looking, had jet propulsion when I wanted it to, and was dragging bodies along with it. I sat on top of it and laughed and laughed.

This is one example, albeit a particularly psychotic one. Car not fast enough? Tether some boosters to the back, activated by button press. Need a very slow guided missile? Explosive barrels tethered to explosive balloons that move to your cursor. Or, y’know, just set your balloons to explode when they reach max height, set them to go up to the edge of the atmosphere, and tie a person to them. Also: tether two llamas together. With rocket boosters. Why? Just ’cause. 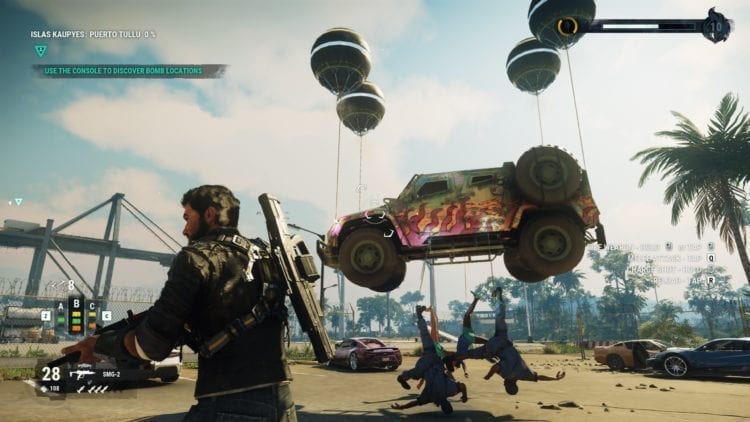 I really wasn’t kidding about my floating corpse car. I have dozens of screens I could share of lethal contraptions (or rocket-powered llamas) but this’ll have to do.

That, right there, is where Just Cause 4 shines. Not when you’re shooting people with guns that lack impact, or when you’re defending giant towers. It’s when you’re doing incredibly dumb things with the fantastic range of creative options offered to you.

In short, it’s very much a make-your-own-fun kind of game. If you go the staid route of dishing out gun-ishment, it’s a lovely looking but rather empty third-person shooter. If you go the batshit insane route of tying everything to everything and adding rocket boosters, it’s a ballet of hilarious carnage that will likely result in your accidental death dozens of times. It’s just a dance that’s only changed a few steps from the last time.

Beautiful, explosive, and endlessly creative - but hampered by similarities to its predecessor, some repetitive mission design, and not many leaps forward in its core mechanics.