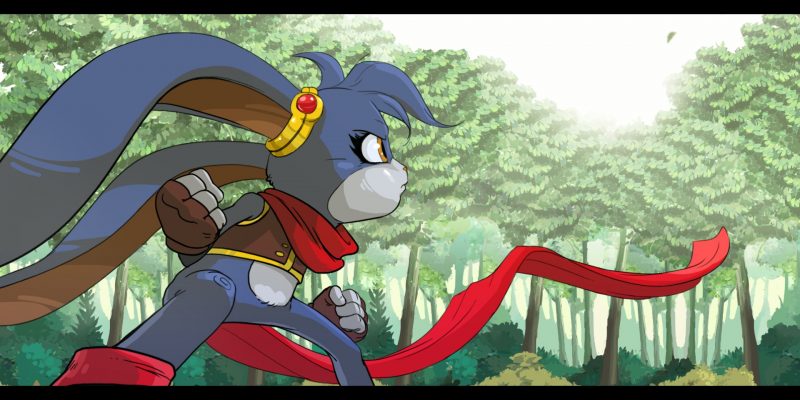 I love mascot platformers, and I can’t overstate that. As a child, I played every one I could get my hands on. Yes, even Bubsy. The genre narrowed quite some time ago and, when we do get them, they’re usually 3D. Kaze and the Wild Masks is a deliberately old school mascot platformer with a lovely, era-appropriate pixel aesthetic. The controls and level design are top-notch, but the game is a bit short on content and unique features. As a fan of mascot platformers, though, Kaze had me entranced the entire time.

Kaze and the Wild Masks tells what little story it has through barely animated cutscenes. It begins with the titular rabbit and her sibling (or friend maybe) investigating some ruins. They find a magic bracelet, but touching it knocks Kaze to the ground. The other rabbit is then pulled into the bracelet and turned into a small, red creature. The evil being that was imprisoned within it escapes and destroys the ruins. Kaze’s friend is able to shield her and take her to safety, but the world is in disarray. Evil vegetables terrorize the animal folk and it’s up to Kaze to stop whatever that evil thing was from accomplishing whatever evil goal it has in mind.

Suffice to say, there’s barely any plot. Cutscenes are infrequent and relegated solely to the beginning of the game and after boss battles. Defeating the final boss shows a different ending based on whether or not players have collected enough gems in each of the game’s levels, though. Due to the lack of narrative trappings, Kaze herself doesn’t have much personality. We don’t know anything about her other than that she’s a rabbit and she’s good at platforming and kicking the crap out of giant vegetables. This is fairly standard for a mascot platformer, but I do wish there was a bit more identity on display here. 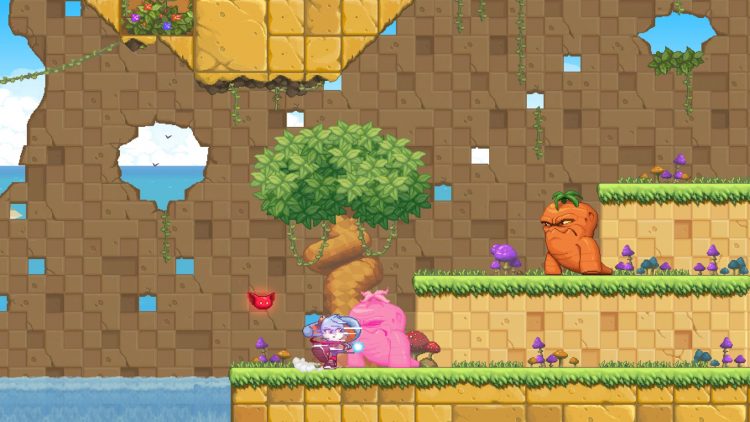 I can show you the worlds

Kaze and the Wild Masks is divided into four worlds with several levels and a boss battle in each. It’s the standard Mario or Donkey Kong Country progression. You go through the levels, beat the boss, and unlock the next world. The visual style of the levels is somewhat reminiscent of classic Sonic, but the structure and gameplay are specifically akin to Donkey Kong Country and the last couple of Rayman games. Each level requires Kaze to make it to the exit portal, but there are three optional objectives, two of which are required to be completed 100% if you want to see the game’s good ending.

Each level in Kaze and the Wild Masks has over 100 pink gems to accrue. Finding at least that many will grant one of the 31 large gems needed for the good ending. Then there are the two green crystals that contain a miniature objective, which typically boils down to collecting green gems or defeating a certain number of enemies within the time limit. Finally, there are the letters that spell “KAZE” that are strewn about. The crystals are needed to unlock each world’s tougher extra level, and you’ll need the pink gem from those extra levels to get the good ending. But the reward you receive for finding the letters only counts toward completion.

Once a level is completed, a stopwatch appears at the start, which will allow players to undergo a time trial. There are watermelon, silver, and gold awards for completing these, but they don’t apply to the game’s completion percentage, so they’re more for people who just want to compete on the leaderboards or get more mileage out of the game. There are just 31 levels in total, with four boss fights, so it won’t take all that long to 100% either. Most players can probably swing it in about eight hours, while simply completing the game will take much less time. 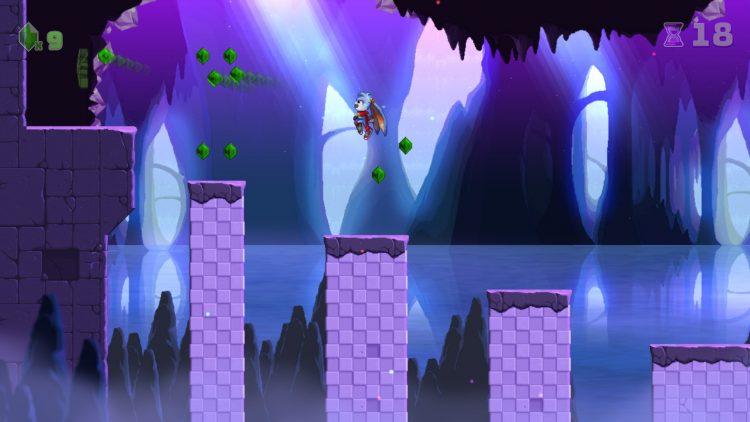 The controls in Kaze and the Wild Masks are exactly what I wanted. Everything is exceptionally responsive and easy to grasp. Kaze can jump, use her ears as helicopter blades to slow her descent, ground pound, and use a spin attack. Both jumps and spin attacks will kill foes, which humorously turns them back into normal-sized veggies. The game is simply a joy to play, as Kaze always behaved as I wanted her to.

The titular masks also show up throughout the course of the game. There’s the eagle mask which lets Kaze fly and shoot projectiles. The shark mask lets her swim freely underwater and dash forward. Finally, the tiger mask grants an air dash and wall jump, while the dragon mask turns the game into an auto-runner. These show up in specific levels and are similar to the animals in DKC.

The level design is just as fantastic as the controls. There might not be a great many levels, but there’s a lot of variety, which is often inspired by DKC. You’ll find levels where Kaze has to run from hazards, such as tornadoes, acid, or ghost fish. Also, some levels where switches need to be activated to temporarily disable foes. 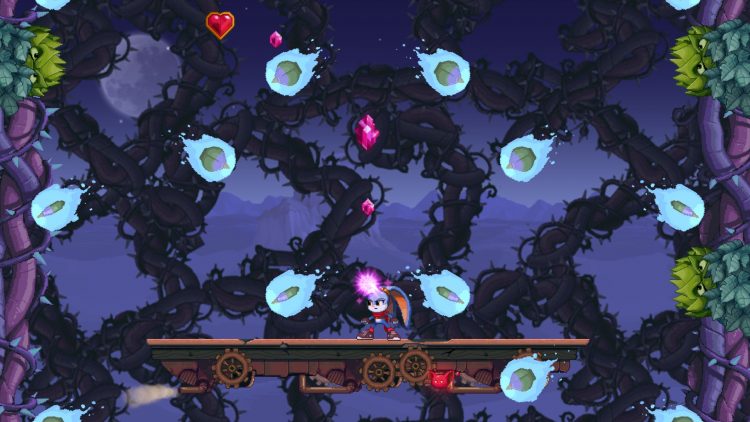 There are plenty of specific contraptions that are used to get around. Kaze can use slanted ropes that can be leaped off of, scales that are used to reach higher ground, and loops to grab onto with her ears. The aforementioned autorun stages clash a bit with the rest, but those too are of high quality. I very rarely had any issues with the level design here. It’s clear just how carefully honed every aspect of Kaze and the Wild Masks is.

Anyone who enjoys mascot platformers will probably get a lot out of Kaze and the Wild Masks. What it lacks in originality, it makes up with pristine controls, design, and visuals. I wish there was more of it, but the game is a curated, entertaining blast from the past that captures much of what I love about the genre. The difficulty is similarly well-executed. The game isn’t hard, but it’s not easy either. Getting gold medals during time trial stages can be rough, though, as is the overlong final boss fight that features no health pickups or checkpoints. Regardless, this is an excellent game that’s easy to recommend.

Kaze and the Wild Masks

While on the short side and not particularly original, Kaze and the Wild Masks is an exceptional 2D platformer filled with well designed, engaging levels and tight, responsive controls.

Say No! More preview — And they waddled into oblivion

By Kurt Perry15 hours ago
Reviews

By A.K Rahming17 hours ago
Reviews