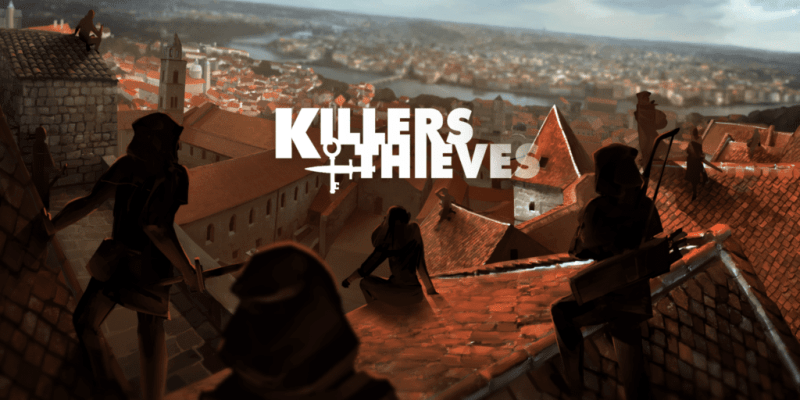 Two years is a lifetime in the endless churn of videogame news, but if you can think back that far you may recall whispers of an Alex Thomas (Creative Lead on The Banner Saga Part One) solo project. Thomas wasn’t involved with the second Banner Saga release, because he was busy making Killers and Thieves; a game about running a Thieves Guild in a fictional, medieval-era city.

He’s finished it now, and it’s out today. Not in Early Access, or as a Beta, but a complete game. I’ve been dipping in and out of its treasure-pilfering trials this past weekend, so I can tell you all about it.

Your base of operations, cunningly disguised as a pub. Also, an actual pub.

Short-term, your task in Killers and Thieves is to spot rich properties on a top-down map of a city district, send in a team of padfoots to lighten the strain on some cupboard drawers, then fence your liberated goods through a nearby shop. The gold keeps your burglar squad employed, allows you to hire promising new cutpurses, and enables the upkeep of other shop-fronts for specialised merchandise like liquor or weapons.

In the longer term, the main pair in your crew (dubbed Key and Candle) are aiming to exact revenge on the rival Foxheart Guild, district by district. You can run a loot-acquiring heist just about anywhere, but specific story missions will advance the plot and open up new areas of opportunity in the city. As half of the game’s name suggests, your organisation is pretty ruthless. Several of the story missions involve killing off a few people just to send a message or sow a bit of chaos.

In mechanical terms though, the biggest distinction found in Killers and Thieves is between the managerial side and the real-time heists. While some missions automatically resolve after a few taps of the ‘advance one day’ button, most put you in direct charge of your squad of sneaks.

Tortoise is appraising dockland real estate, while I’ve already found some stuff in the North.

So far the game has given me control of between one and four thieves and/or killers on a heist, but that number may well increase as missions get more complex. The view changes from predominantly top-down to side-on, and the art style for the characters starts to look rather like The Banner Saga. That’s no bad thing as the motion-captured-person-but-animated effect is effective in this game too.

Getting away with a successful job is all about utilising the skills at your team’s disposal to avoid guards, and, to an extent, random townsfolk who will alert those guards. Each of your team can be trained in up to three special skills; a hard limit which means nobody is ever going to be able to become the one true perfect burglar. Instead, you’ll want a set of sneaks who complement one another. Killers and Thieves tends to help you out a bit here by setting gated criteria for story missions. Things like requiring at least one person who can fight a bit and another who can pick locks.

Broadly, the skills break down into those that increase your awareness of surroundings, ones which give you more movement options, and fighting abilities. In the first category you have things like Vigilance, which means the character will automatically be able to see what’s in the next room (instead of having to break the fog-of-theft by peeking through a keyhole). Movement options include things like being able to climb up and down the sides of buildings and pop into rooms through windows. Finally, fighting skills make your people handy with a knife; the only way to prevent a fellow thief from being frog-marched off-screen to jail after capture.

Candle and Botch keep an eye out for trouble while the house gets cleaned out.

Actually controlling all of this can be a bit fiddly. Guards and house-dwelling civilians both move pretty quickly, and the Stealth stat (which determines how long it’ll be before you’re seen) plummets in seconds if someone catches a glimpse. Keeping out of view takes deft use of the Hiding ability, which everybody has, and closing doors to break line of sight. Even when hidden, though, that detection meter will still tick down. If a guard decides to end one of his semi-random patrols facing you for a few seconds, that’s just bad luck.

There is a pause function, but you can’t issue any commands while it’s on. That’s purely there for you to catch a breather and survey the situation.

Killers and Thieves has a non-optional perma-death system and only one save slot, so it can be pretty brutal if you screw up. Once you commit, participants trade automated blows (until you opt to try to run, or give up). Giving up a fight you’re about to lose is pretty much always going to be the better choice. I found the fighting in general to be rather inconsistent, though. A character who had 80/100 Strength was able to kill five guards without breaking sweat, but another with 60/100 couldn’t land a hit against a single (weak) opponent.

Other quirks can trip you up too. Your thieves will automatically leave their Hidden status whenever they move, unless they have the Prowl skill. However, even those with Prowl will no longer be Hidden if they go up a flight of stairs (which is accompanied by a dashing animation). That auto-dash means it doesn’t technically break the rules for how the skill is supposed to work, but it feels a little illogical. And if you’re a bit too judicious with stabbing at the key to toggle Hidden (you’re surprised by a guard, say), it can be quite easy to accidentally switch it on and off again. Granted, that’s partial user error; but in a game with significant consequences, that control should be tighter.

The city map, with areas aplenty waiting to fall under your domain.

Get through the night without bungling the burglary and your characters will most likely be able to level up. Fancier skills (like the aforementioned Climbing) require five points apiece, mid-tier skills (such as Appraising your finds on the fly) cost three, and a bit of stat boosting to Strength (fighting/health), Skill (speed of looting), or Stealth (as mentioned, how soon you get seen) costs just one. They also have a time investment, which needs to be taken into account if cash is tight and payday is approaching. Thieves train better when their morale is high, so if you’ve scouted a nearby tavern it can be a good idea to send them for a bit of boozing first.

While it doesn’t appear hugely replayable in terms of making different decisions or following new narrative branches, Killers and Thieves already feels like a game I want to restart. Armed with a better idea of what I’m doing (getting hold of a second thief with lockpicking would be an immediate priority) and better equipped to avoid getting anybody stupidly killed, I think I’d be on top of the Guild finances rather than struggling to make ends meet. The main tension during heists is whether you’ll get caught, but there’s a persistent monetary pressure to the managerial side too; one which forces you to take risks and squeeze in more optional heists.

Both aspects become less of a struggle once your team has a few skills between them, giving them much more flexibility for stealing loot from more affluent neighbourhoods. I’d be curious whether later missions deploy special guards or other awkward threats, because if not the difficulty curve is an oddly inverse one. Since I only reached the third district (which does already have larger buildings to rob), I can’t confirm either way.

You’re going to have to put in a hell of a performance to live up to that nickname, Mitchell.

Killers and Thieves presents a novel take on the stealth genre, actively seeming to avoid staples like “use noise to distract guard” among its Commandos-like system of team skills. That lone save slot keeps the tension high, both throughout missions and during managerial decisions; there’s always plenty of pressure to keep your light-fingered guild thriving. Some of that pressure stems from the real-time controls not always feeling as intuitive or fluid as they need to be, but there’s enough going on here to make the systems in Killers and Thieves worth mastering.