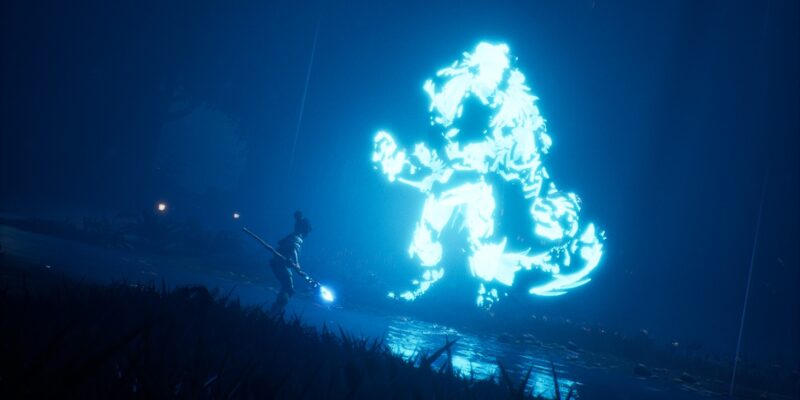 Kena: Bridge of Spirits is a self-published indie game, but it doesn’t look or play like one. In fact, this is probably the best-looking indie game I’ve ever seen. Most of its other offerings aren’t quite at the same level, but nearly every facet of this game showcases the skill and patience that was undoubtedly used to create it. Truthfully, it does little new or particularly interesting gameplay wise, but the high level of quality and compelling world design make it a very good time, as long as you don’t mind how insanely safe it plays things, along with a few questionable decisions.

The narrative in Kena: Bridge of Spirits is very much lacking. I wouldn’t call it bad, but both the world and the characters that inhabit it aren’t noteworthy and I didn’t care about the story, truth be told. Kena is introduced at the beginning of the game, obviously, but we never get much of a feel for her as a character. Her goal is to purify a mountain shrine that’s been corrupted by the area’s former village chief, Toshi. Kena is a spirit guardian and can interact with the dead, but the game does very little with that premise, and does practically nothing to make us care about Kena or her journey.

It certainly doesn’t help that Kena’s voice actor always sounds like she just woke up. There’s a lack of energy to the role, which doesn’t help when combined with the character’s distinct lack of presence. As for the world itself, it just feels like another “Westerners tell a generic mystical story set in an East Asia-inspired world” story. Most of the cast have Japanese names and Eastern mysticism pervades the thematic and visual design. But, man, what visual design. The cutscenes are so gorgeous that they’re the same quality as a CGI movie. The environments may not be particularly original either, but they’re breathtakingly lovely. There’s so much quality in the visual design, but I wish there was more creativity. 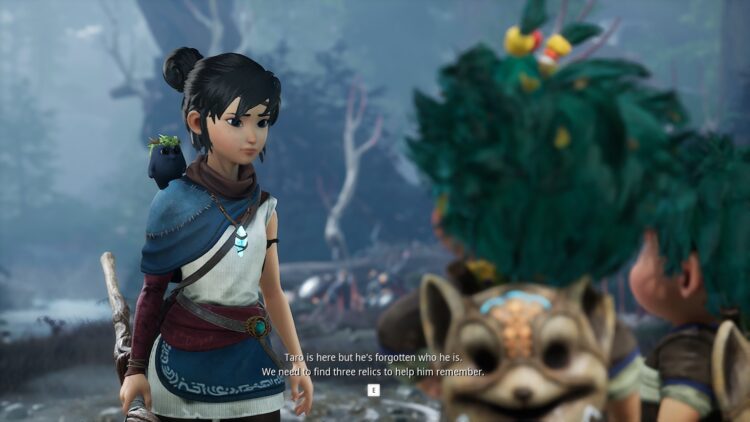 Technically open, but not really

Kena: Bridge of Spirits is set in a connected world, but you shouldn’t consider it an open-world game. You won’t hit any load screens while you’re playing, though, and areas are large, with plenty of opportunities to explore. As Kena, your job is to find relics to placate three spirits so that you can make your way to the mountain shrine. The meat of the game is helping the first two spirits, and the third spirit’s section feels more like a footnote at the end. Granted, the game is more than long enough. I played for roughly 15 hours and I think that was plenty.

Exploration here is quite enjoyable, but it isn’t all that rewarding. The main thing to find are Rots, small creatures that were once part of the Rot God, and once found they’ll join Kena. Humorously, there are like a hundred of them by the end, so you’ll see them with you all the time. I don’t like their design, though. I think they’re basic and kind of ugly, and I wish they looked different. Unfortunately, almost all of Kena: Bridge of Spirits’ customization applies to them.

Rot can be found hiding all over the place, but you’ll also get upgrade currency from finding enemies, as well as purifying small shrines. You’ll find thousands and thousands of blue currency that you can spend at hat shops. You can get both hats and blue currency from chests, although you’ll occasionally find Rot in these too. Some chests are cursed and require you to complete a combat challenge. But the only things you can buy with the blue currency are hats and masks for Rots. I didn’t care about this even a little bit. I’d even prefer a different colored outfit for Kena. Anything but yet another stupid Rot hat. 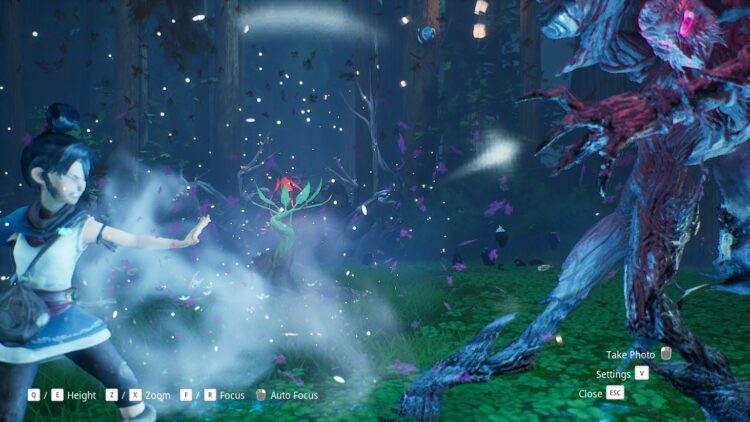 Kena: Bridge of Spirits juxtaposes between navigation and combat. You know this rhythm. You make your way to your destination, only to find an area that’s corrupted, which means it’s time to fight some enemies. Both Kena and her foes animate splendidly, but the enemies here are boring wood spirits. Combat is good, but not great. Kena fights with her staff and has weak and strong attacks. You gain Rot abilities via the upgrade menu that grants new moves, plus you’ll find new abilities — such as spirit arrow shots and bombs — that you can use to find goodies while backtracking.

Kena can dodge and parry too, but I was underwhelmed by both of these for similar reasons. To put it simply, aside from certain boss battles, this is an easy-going experience. But, for whatever reason, the i-frame window on Kena’s dodge and the parry window for her guard, are insanely narrow. They’re both usable, but I was shocked that there wasn’t more leeway. Some bosses are far harder than they need to be due to this, especially when combined with the amount of damage they do.

Granted, only a few of the game’s bosses gave me much trouble, but they gave me more trouble than I felt was reasonable. The penultimate boss, which is really the game’s final challenge, truly felt like a Dark Souls boss to me. While the combat is fine when you’re fighting the game’s less demanding enemies, it just doesn’t have as much depth as it needs to make this decision make sense. When the game gets difficult, it does so clumsily. Perhaps a boss will become invincible for little reason during an animation, or maybe their attack can stunlock you, causing you to take a second hit through no fault of your own. I feel like it was pushed too far at times just to have tougher boss battles. 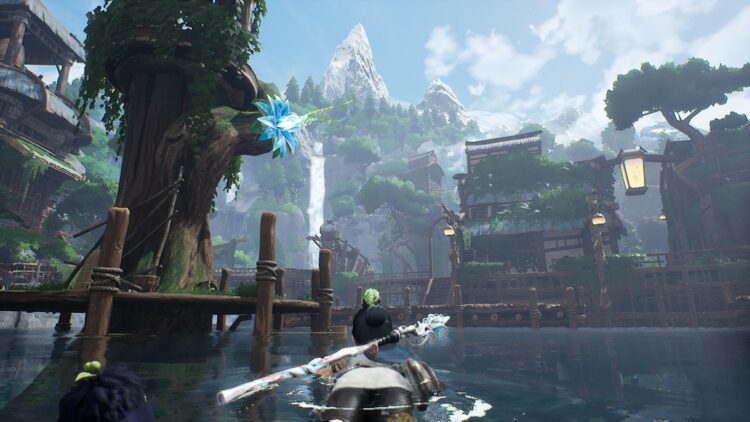 And there are issues surrounding this too. Kena can only heal by having Rot consume special plants in combat arenas. But, you have to break your lock-on in order to direct them to grab it. This means you often get hit in the back whenever you try to heal. Especially in that boss battle I can’t seem to shut up about, the parry windows felt like they were artificially narrowed even more. I’m positive that strikes from other enemies would be parried with the exact same time, but it just didn’t work a lot of the time against this one boss. Being locked onto him when he teleported would also cause the lock-on to be stuck until it was disengaged. Camera issues also crop up when fighting groups of enemies, as the automatic camera can’t seem to decide what to focus on a lot of the time.

The navigation in Kena: Bridge of Spirits fares better, though. Kena can double jump, although I wish she had an air dash or a small glide, as I wanted more air control. Thankfully, aiming in mid-air slows down time and can be used to cover larger distances, which makes absolutely no sense. But, there’s a lot of climbing and using bombs to create temporary platforms that you can jump onto. It all feels pretty good.

But again, that’s my biggest problem with Kena: Bridge of Spirits. There’s so much talent on display in this game that I can’t help but feel surprised that so much was played this safe. Everything here is good to a certain degree, but nothing feels special or unique. This is a very good game, but it seems less ambitious than it should be. In the end, it feels a little perfunctory, even if I enjoyed most of my time with it. I’m very curious to see what Ember Labs does next, though. If the team bolsters its writing efforts it can create something truly inspired, we could have a classic series on our hands. 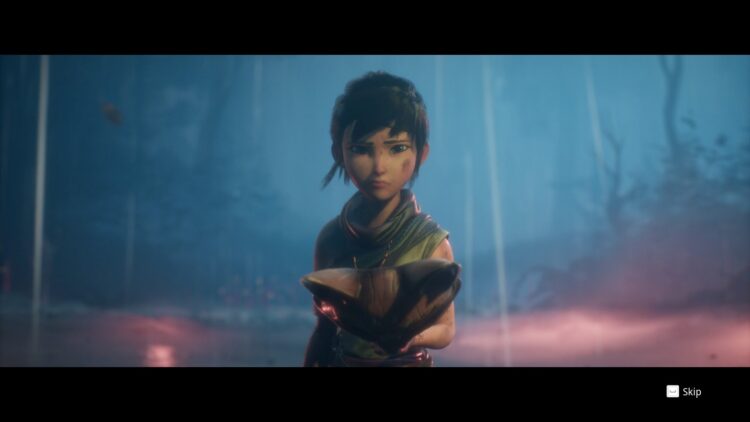 Kena: Bridge of Spirits is gorgeous and extremely well made, but there's less heart here than I was expecting. It's still a worthy adventure with great controls and lots to see and do, though.

By Logan Broadley4 days ago
Hardware