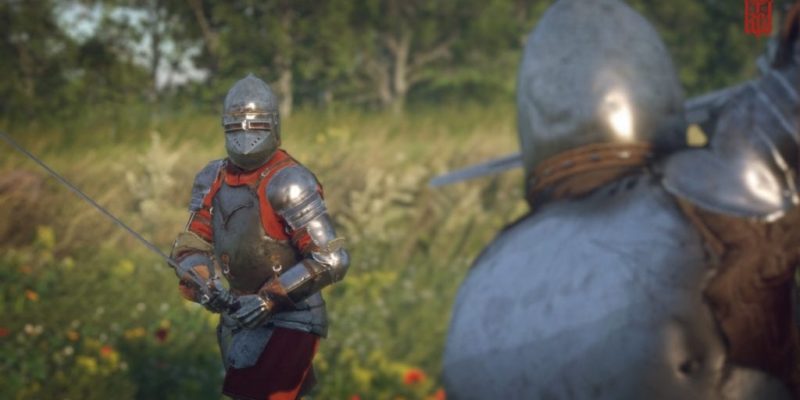 Kingdom Come: Deliverance is an interesting beast. Halfway between a Skyrim-esque action-RPG and halfway between the simulation stuff of old-school CRPGs; halfway between the usual videogame liberties and halfway between historical accuracy. Set in Bohemia in the 15th Century, it promises emergent gameplay, branching quests, and all sorts of possibilities that make my neurons tingle. Factor in a For Honor-style combat system where stance and direction of attacks matters, plus the need to eat/sleep/not die of blood loss, and you’ve caught my interest.

It’s ambitious as all hell, basically, but you know what they say – shoot for the moon! Even if you miss, you might get lucky and give a pigeon a concussion, or something like that. 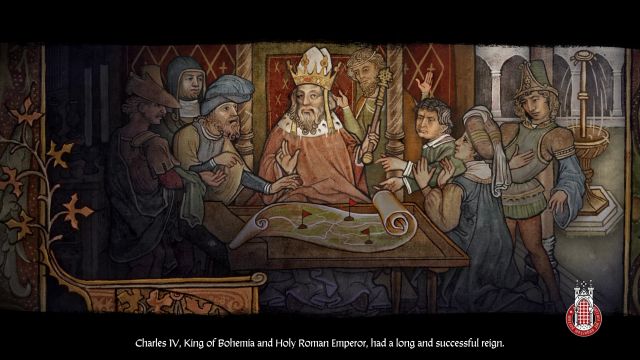 He also had a map that broke the laws of physics, and a glassy-eyed stare that would make Snoop Dogg suggest he lay off the smokeables for awhile.

Oh, right. I’m writing this at 7am, having been up all night, and I mention this for two reasons: firstly, in the hopes that you’ll forgive me for any mistakes; and secondly, because it probably says something about Kingdom Come that I played a bit more than was strictly necessary to write this piece. I haven’t played remotely enough to make any kind of judgment on the game itself (I’ve barely finished the tutorial stuff, I think) but I’m certainly intrigued.

Judging by the hype surrounding the release and the fact that you’re reading this article, I’d guess you are too. I’ll quickly note that I think this review copy of the game contains the day one patch, but it’s going to be impossible to know for sure until the game launches in a few hours.

Now, I’m running Kingdom Come: Deliverance on an i7-3820 with 16GB RAM and a GeForce GTX 1080 Ti, and as a bit of fair warning, this game is seriously demanding. Let’s have a look at the options and I’ll explain. 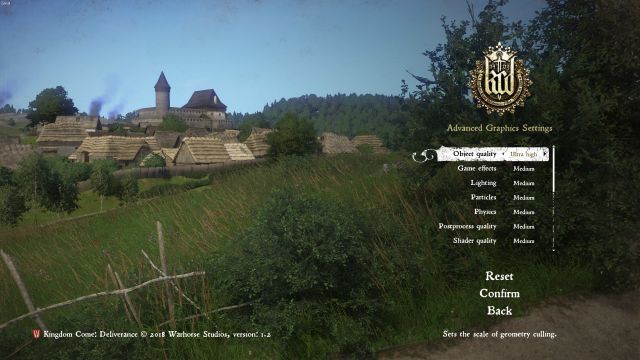 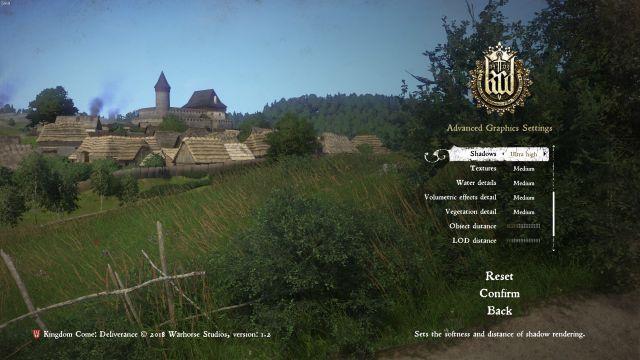 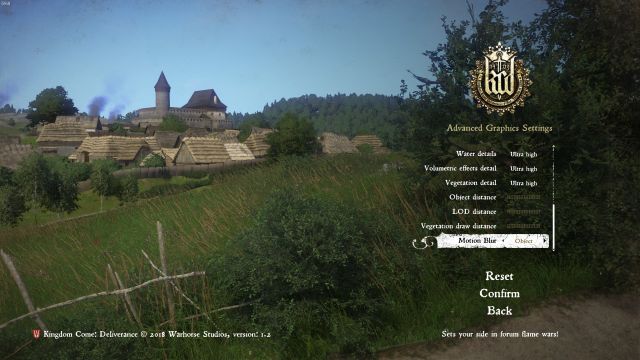 All of those options scale from Very Low all the way up to Ultra High, stopping off at Low, Medium, High, and Very High along the way. Motion Blur can be set to Camera, Object, or Off, and its description (“Sets your side in the forum flame wars”) is amusing enough that it’d warrant an extra point if we actually gave scores for tech reviews.

Aside from those, you’ve got Vertical FOV (ranging from 60 to 75), Windowed/Borderless/Fullscreen options, and resolution. Resolution can be dropped as far as 640×480; I can’t raise it higher than 2560×1440 but as that’s the maximum resolution of my monitor, it’s entirely possible that it’s just preventing me from setting it to 4K.

Finally, there are the controls, which are redefinable. There are lots of them, and – as you should probably expect for a first-person RPG on PC – they’re well-optimised for keyboard and mouse. I’ve seen nothing egregious in the first two hours of play: if you’ve played any other first-person action-RPG thing (like, say, Skyrim) then you have a pretty good idea of how it controls. 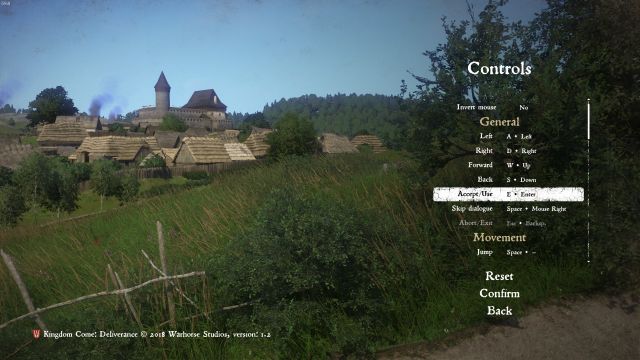 I’m not posting up 9 screenshots showing all of the control mappings. Sorry, but if you’ve played a first-person RPG on PC, you know what you’re in for.

All in all, not a bad set of customisable options. My one serious gripe would be that an FOV of 75 still feels too low to me, and it contributed heavily to some motion sickness in the first few minutes of the game – especially because of other little features like headbobbing. I’ll also note that the motion sickness abated once I dropped the visuals enough to get a near-constant 60 FPS, which is what Kingdom Come caps out at in gameplay (30 FPS in cutscenes) but as games rarely make me feel ill, this seems worth mentioning.

And yes, I did have to drop the graphics. Setting things to the High default and turning off Motion Blur (may it forever burn in whatever hell is reserved for terrible visual effects) gave me a pretty constant 55-60 FPS at 2560×1440, but if you’re running at 1920×1080 and have a similar rig to mind, I daresay you can manage to push the graphics up a bit higher. Nonetheless, Ultra High made my machine wince: 50 FPS was the maximum, while distant views dropped it to the mid-30s, and spinning around in those scenes pushed it down into the mid-20s. This worries me a bit in terms of what it might mean for lower-scale rigs.

As per usual, let’s have a look at some comparisons. 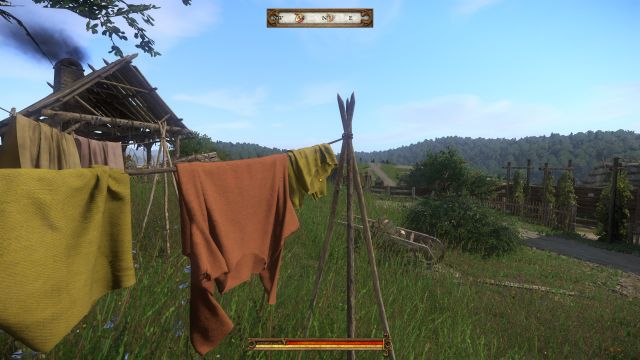 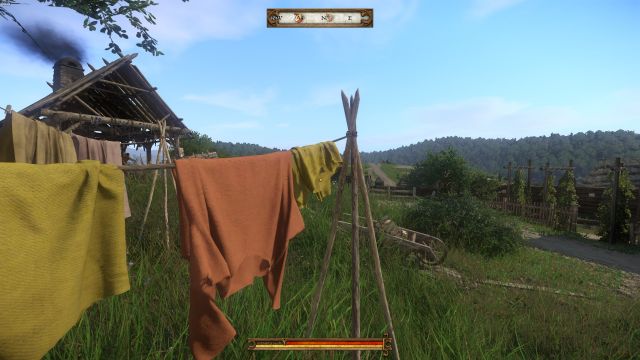 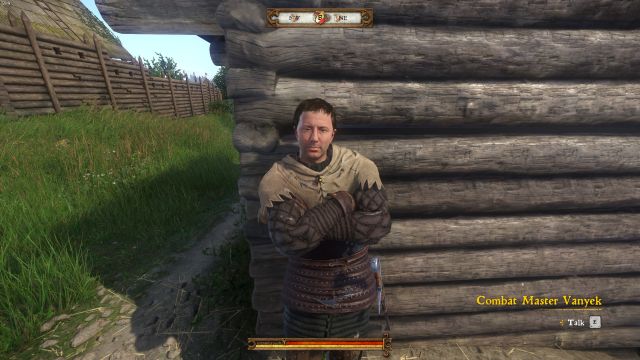 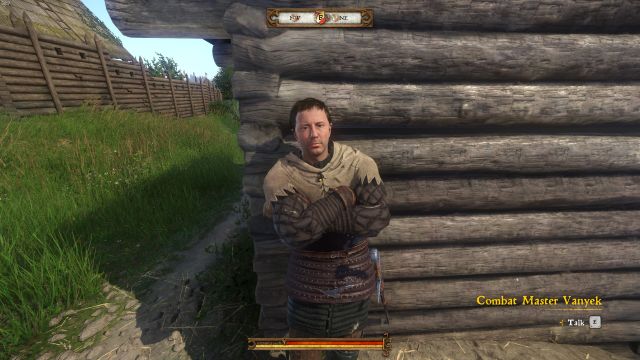 Probably ultra high. And I’ve only just noticed that the shadow of his sword hilt looks like a dong.

The most noticeable changes are to vegetation and anti-aliasing, although close-ups on characters do also start to look a little bit iffy when you drop things to rock-bottom. On the other hand, the set of screenshots showing the difference between High and Ultra High… uh, well, I’m starting to wonder if I actually did change the settings. I mean, I’m sure I did, but it’s hard to see much difference. There’s something blue on Vanyek’s top in one screenshot, and the wooden wall in the background looks slightly sharper, but the former could be a bit of clipping and the latter might be my sleep-deprived brain. Basically, it looks alright.

Oh, and according to Task Manager, Kingdom Come was using about 60% of my processor and 99% of my GPU. Take that as you will, because, well… Task Manager. 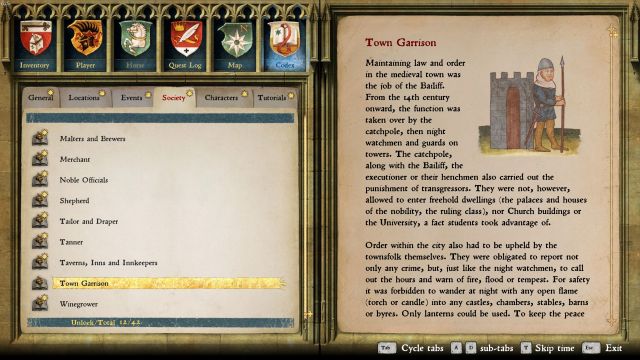 If you ever wanted to learn an absurd amount about life in the Holy Roman Empire, you’ve come to the right place.

While Kingdom Come looks pretty great in stills, it suffers from some of the shonkiness of something like the Gothic games, where the animation isn’t quite right. I don’t find it particularly off-putting (I mean, I associate it with stuff like the Gothic games, so “ludicrous ambition” and “occasional visual wrongness” go hand-in-hand for me) but it’s certainly worth mentioning. 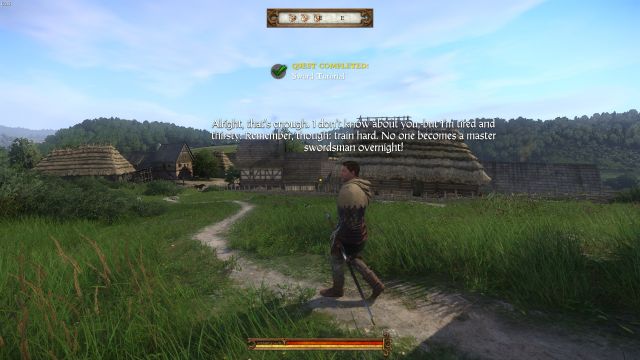 The UI isn’t exactly fantastic, either, with the scaling on things like text seeming iffy for 2560×1440 resolution.

Another thing worth mentioning is the loading times. I will concede, happily, that I probably need to defrag my hard drive. I will also concede that I could’ve installed Kingdom Come onto my SSD, if I fancied removing almost everything else on there. But, as a freshly installed game with nothing else running in the background, the loading times are really long, and occasionally a little odd. I’m okay with the game taking a full minute to load the first time I start it. Riding into the world or going into a house? No loading or noticeable scene changes. Starting a conversation with a person or opening up the map? A black screen and a loading bar that lasts up to 10 seconds.

Also, I’d really like it if people wouldn’t walk into me and then complain about me barging into them. And maybe one of the early quests should’ve checked if I had the item it required before letting me turn it in. And textures probably shouldn’t still be popping in a full 60 seconds after I’m in the game. Basically, quest bugs and jank and performance and loading issues, and that’s in the first 100 minutes. Not a great start.

And now “My Lovely Horse” from Father Ted is stuck in my head.

Which is where the problems lie, really. I’m okay with most of this – I mean, the original The Witcher pre-Enhanced Edition had some of the longest and most regular loading times known to PC gaming, plus its fair share of jank and bugs – but when you’re throwing in unforgiving combat and a very limited save system (buy save items or find a place to sleep, basically), these things get more problematic. I have a horrible feeling that this is a case of a small developer being a tad overambitious, leading to a title that’s a lot more hardware-intensive than it should be, and a lot buggier and broken than many will tolerate.

In short, I’d guess Kingdom Come: Deliverance is going to be a really divisive title. I’m hoping that those who have the machines to run it and can deal with the bugs and problems will find a flawed gem – perhaps not on par with Vampire: The Masquerade – Bloodlines or anything of that ilk, but if it delivers on even half of its promises it might be something so unique it’s worth a look – and if it gets patched up to fix a bunch of these issues, I’ll be a lot happier. But right now, everything I’ve seen indicates a buggy and poorly optimised game that should be approached with serious caution, especially because I can’t even say for sure if it really does deliver the emergent RPG it boasts.

(Reminder: I think that this experience is with the vaunted day one patch installed. If it’s not and there’s a sizeable update in a few hours, I’ll add some updated impressions.)

By Andrew Farrell5 hours ago
Tech

By Lawrence Le7 hours ago
Reviews