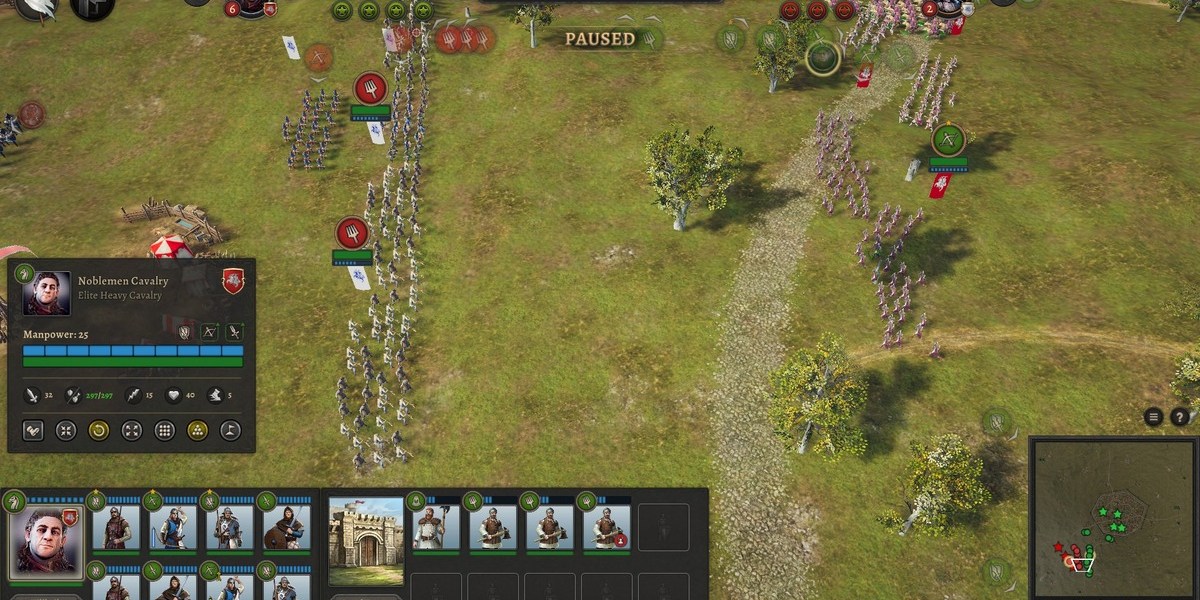 Knights of Honor II: Sovereign is a game that will demand some expertise in building a military and waging a war. To aid you in this task, we have compiled this short guide. Read on to find out how to succeed in the war and battles in Knights of Honor II.

Knights, your named nobles, can lead armies. Only Marshalls can lead by default — other knights have to learn at least a single Marshal skill.

Marshalls are the knight class specialized for war and leading troops: Marshals are a good source of cavalry. Screenshot by PC Invasion

When upgrading a Marshall’s skills, pick those that suit your play style and country’s access to units the most. Among secondary skills, the ones that give access to cheaper unit replenishment are always good.

Knights can buy up to four army upgrades. The basic ones increase supply carrying capacity or unit size. I prefer the latter, since you can often resupply in the field by pillaging. Marshalls with Logistics III and a country tradition of logistics can buy four upgrades for their army rather than one.

You don’t need a knight to hire troops in a town. They will join the province the defense force when defending in a siege, but will not move on the campaign map. You need a knight to take them into their army. By default, any town can only train peasant mobs. They are very cheap to hire and maintain, but they’re also weak on the battlefield.

To train better troops, you need to construct a building:

Barracks are best built in provinces that have at least a single castle feature as they synergize well. Fully upgraded Barracks allow you to build the entire light troops line: light infantry, light spearmen, light horsemen and bowmen, as well as catapults. Bowmen are a good early investment: militia and peasants can’t shoot and your knight provides you with a unit of elite heavy cavalry for flanking or harassing archers.

Royal Armory (and its upgrades) will be necessary to train the heavy varieties of troops, which are the best vanilla troops you can get. Depending on your start date, your country may have access to special troops — or lack access to certain default units. Example: 12th-century Lithuania has no heavy cavalry, but 13th century Lithuania trains the superior Boyar cavalry instead. You can conquer provinces that grant access to special varieties of troops. Example: Scandinavian towns will allow you to train either regular Light Infantry or Viking Infantry which trades defenses for more attack.

Our personal preference is for armies that are 50% melee, 50% archers. Friendly fire for archers exists, but the impact is less noticeable than putting your troops into a disadvantageous position. Catapult is a good army upgrade as it outranges archers and at least used to be good for aggroing AI.

During battles in Knights of Honor II, your army will be arrayed at one end of the battlefield, and the enemy’s at the other. There will be one or more capture points per army, represented by camps.

Sudden victory can be achieved by:

Some quick tips for Knights of Honor II battles:

Siege battles add walls and towers to the map. The capture point of the siege defender are inside the fortifications. Initiative is a mechanic unique to sieges. The side that initiated the battle is on a timer — they lose if this runs out. To stop the timer, the forces have to actively engage the enemy and go after their objectives. There are more graceful ways to crowd a wall. Screenshot by PC Invasion

Infantry always have ladders to scale the walls, where they can capture the automatically firing towers. Cavalry can’t climb walls, but they can capture unguarded/uncontested gates and let themselves in. You can task troops to go onto the walls and fight the enemy there, even if the pathing is rough.

Once war is declared or joined in Knights of Honor II, any of your knights on missions to enemy countries will be imprisoned — and vice versa.

Up to two armies per side can fight in a battle. A battle can be autoresolved or commanded manually: There are two more ways to replenish supplies:

Sacking enemy villages gains money, books, and supplies. What you get depends on the symbols shown over the villages on the campaign map. Gold coins means money, wheat means supplies, books mean books. Sacking villages goes in two phases: beating the defenders (not always present in enough numbers to cause casualties) and then the actual sack. You can cancel it at any time, but you will waste the progress.

Naval battles can only be simulated. Therefore, only skills, traditions, and building chains can influence them. 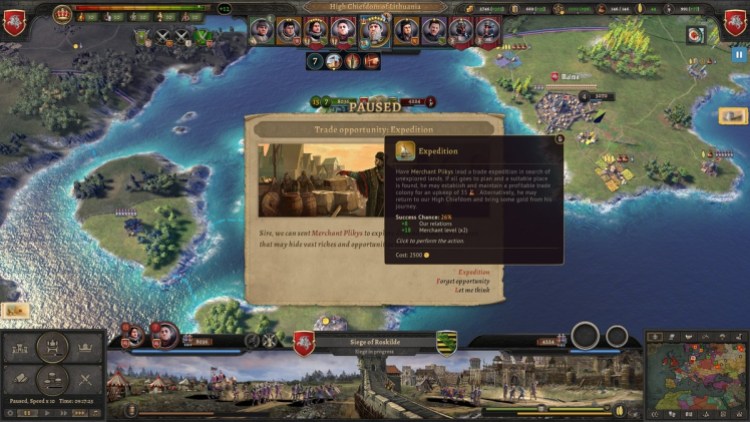 You can only launch the siege battle after whittling down either the enemy morale or defense level down to 50%. Screenshot by PC Invasion

When you click on a town or a castle, you can see a circle around it: that’s the range at which they’ll attack enemy armies with (ranged). Manage your armies so that they would move around these.

Rivers in hostile territory are an obstacle: armies will have to wait some time before crossing them.

After conquering a town, you have to choices: get an army to put down the resistance (hurts the economy and international relations, may fail) or have a religious knight adopt the population (expensive in books, money, and tradition, may fail, otherwise no downsides).

You can also wait for a rebellion to break out and take over the town, then beat the rebels in the field, though this option is mostly out of your control.

Mercenary bands rove the map, sometimes camping down near your towns. To interact with them, send a friendly army.

Rebel armies will start out weak and have a small bounty (~300 gold) placed on them. If not defeated, the rebels will get better units and accrue an ever-higher bounty. Anyone can cash in the bounty, so if you see that your neighbor can’t deal with it and you can spare the forces, you can send an army to hunt them down.

Captured knights can be persuaded (more expensive based on level, may fail) to lead a rebellion in a country of your choosing. Such a rebellion will start with more powerful units and be loyal to you, but still under AI control.

A neighboring province that’s has loyalty to your kingdom may rebel and try to join you. That does it for our guide on war and battles in Knights of Honor II: Sovereign. Keep in mind that not everything will work out, even with the help. Experience is always the best teacher.