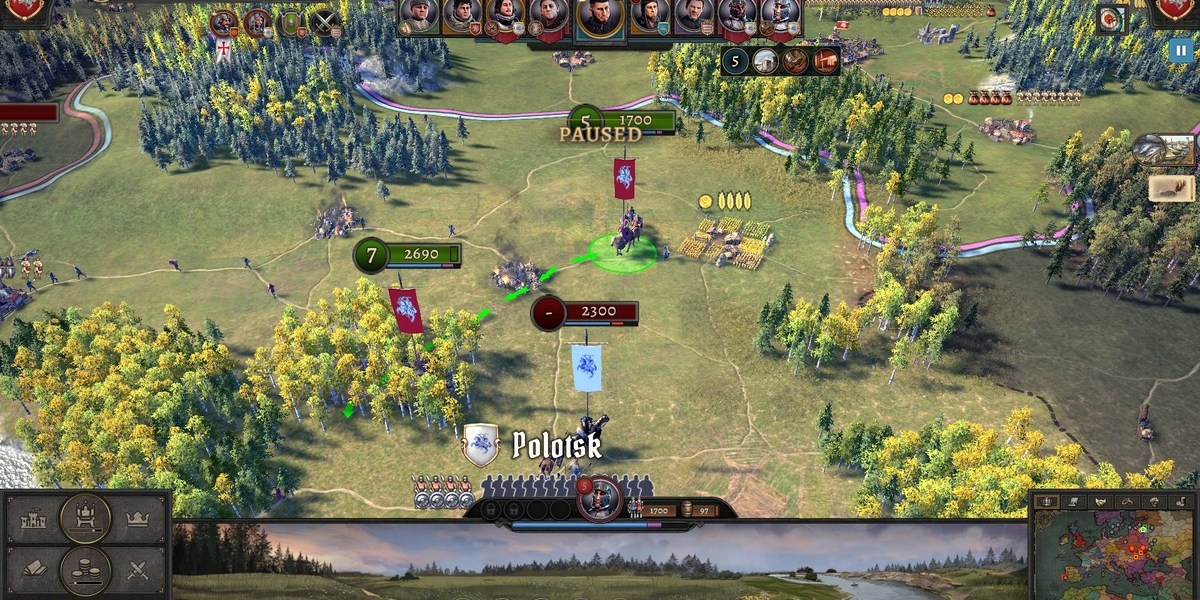 What if Crusader Kings had real-time battles? What if Total War was in real time? Knights of Honor answered these questions back in 2005 to the tune of a “very positive” rating on Steam. Seventeen years later, the sequel, Knights of Honor II: Sovereign, is still working on the same premise, though it could use some flavorful improvements.

Knights of Honor II: Sovereign is a game about playing a Medieval power in Europe, Middle East, and North Africa. Yes, the map is fairly constrained. Most of Scandinavia isn’t even there, probably to nerf the Finnish puukko meta. The game offers three historic starts — 12th, 13th or 14th century — and allows people to choose any nation except for the Papal State. Additionally, you can mess around to start as a single province or make the game increase your historically small country to seven provinces.

Naturally, I beelined for 12th-century Lithuania. It turns out that our trait at this age is not being able to produce native heavy cavalry. Welp.

Hail to the High Chieftain of Lithuania, baby

Most of the time in Knights of Honor II: Sovereign is spent on the real-time strategic map. Here is where you move armies, build improvements in your provinces, order around your noble knights, and conduct diplomacy. Thankfully, the game allows for up to 10x speed up, though you probably want to slow down a bit for war. If you look at the lower left corner, you can see a plus sign on the >>>. This means I’m playing 10x and that’s why I have so many notifications. Well, that and the whole “changing religion” thing. Screenshot by PC Invasion

From the first steps on the map, it’s obvious that the developer of Knights of Honor II: Sovereign, Black Sea Games, put some effort into thinking about limitations that would prevent easy map painting. For example, the titular knights. They are the specialists of one of the six classes — marshals, clerics, merchants, etc. — that do all the real stuff in the kingdom. Without merchants, you won’t have that lucrative trade with other nations. Without a spy, you won’t be getting intelligence on an enemy nation or conducting shenanigans on them. Marshals are the only ones who can lead eight-unit armies. You get the drill.

But you only get eight of the knights plus your king, so choosing the right mix is very important. You can’t switch them out on the go; the ones you kick out are gone permanently. The number is also important, because each knight can govern a single province. What happens when you get your tenth province? Well, you reap much-reduced benefits from it, that’s what. Similar limitations exist for unit recruitment (with a very Europa Universalis-esque recruitable population pool), collecting books to level up your characters, and even gold. Stockpile too much and face inflation! You better spend that money improving provinces.

Speaking of provinces: each of them has a town where you build stuff and settlements, features, and goods that provide special resources and bonuses. You can build up to eight buildings in a province, and most buildings have three or more upgrades. So, for example, thy new province has three crop farm features. You build a Crop Farming building since it provides bonuses per farm. If you want to build it in another province as well, the new instance is going to be more expensive. Sheep farming and Saltpeter trade are made available by Vilnius province having the matching special resources. Screenshot by PC Invasion

Crop Farming has three upgrades: Crop Rotation, Manure Pits, and Heavy Ploughs. Now, the upgrades are applied globally and instantly, but this makes future copies of Crop Farming even more expensive. On the other hand, you’re forced to diversify instead of spamming the same building all over again (though there’s unavoidably some of that). But at the same time you avoid the 4X issue of “new colony, time to queue up the same 10 buildings again” or the Total War nonsense of “new city, time to build a tavern and upgrade it five times again.”

Plus, the features on the map — crop farms, mines, lodging camps, etc. — can be raided for fun and profit, a feature Knights of Honor II: Sovereign borrowed from Empire: Total War four years before it came out. Armies can nab not only money (though it’s a big draw), but also books and supplies.

Once more onto the capture point, dear friends

Right, armies. Combat in Knights of Honor II: Sovereign happens thusly: once two armies square up on the map, you can choose to let the AI simulation handle it behind the scenes. This can take a while — which is time you can’t waste while the war is happening — and we all know that these simulations can be quite wobbly when compared to what you can do as a player. Hence you’re likely to to choose the other option: commanding the a real-time battle. 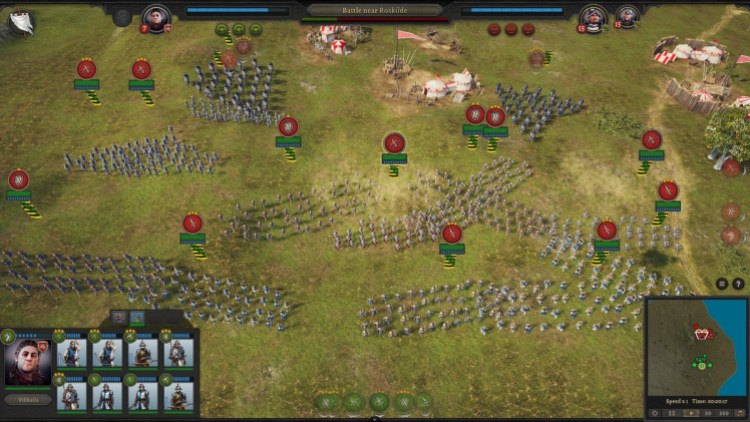 The archers may not be as OP as they are in Total War, but they’re still plenty P. Screenshot by PC Invasion

On the battle map, you’ll have command of up to nine units per army, with minor exceptions. Two armies per side plus a local garrison can take part, and it actually looks fairly impressive. Here, you have to care about such things as rock-paper-scissors unit balancing, morale, flanking, and charging. It’s good stuff!

A lot of features in battles are designed to avoid the pitfalls of the latter day Total War. Once you break a unit, it’s broken for good and not just retiring for five meters before getting back into the fray. There are also other ways to finish battles than slaughtering the enemy army: each army starts with one or several capture points (represented by camps), so if you outnumber the enemy or are that good at commanding cavalry, you can go for that as capturing the points ends the battle. You can’t leave your own undefended for a suicide rush, either: the enemy can capture those to replace their own loses.

For siege battles, the attacking army is on the initiative clock which only stops if you’re actually going forward and grabbing stuff, so no spending half an hour destroying walls with catapults. Lastly, if all the enemy commanders die, the battle ends automatically. This becomes somewhat cheesy when you have siege weapons on the field. The enemy will prioritize targeting those machines, which often leads to generals experiencing death by spear. 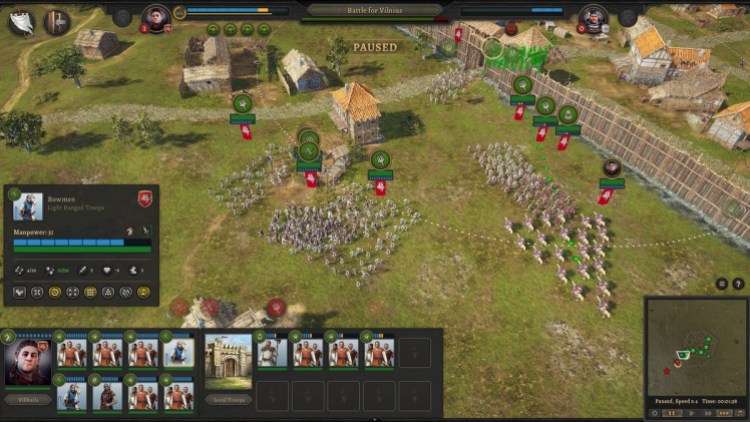 And unlike the simulated battles, which can last a while on the strategic map, actual battles are resolved instantaneously, throwing you back into the campaign management without any time having passed. This allows you to use your forces more economically and with great agility. Now, you may be tempted to two-army gang a single enemy force on the strategic map before it gets reinforced. But if the game knows that a supporting force is 200 seconds away, it will still arrive on the real-time battlefield after 200 seconds.

Feudalism is a janky system of governance

Look, there’s a lot mechanical neatness that goes into making the game less likely to devolve into a simple exercise of rowing doom stacks. But there is also some jank. For one, whether you start as Lithuania, the two-province minor in 12th century or Lithuania the 14th century empire, you provinces are bereft of buildings while your king is the only knight to start. This remains true for every country and time, though there are changes in national unit availability. The 14th-century Lithuanians can eventually recruit Boyar Cavalry, which is the special version of heavy cavalry 11th-century ancestors couldn’t get.

Armies? You have none at the start, and the only thing you can train is peasant mobs. This reminds me unpleasantly of Imperial Glory, another 2005 game, which was Empire: Total War before Empire: Total War, except that all the 19th-century powers started out by being able to train naught but stick-armed militia. 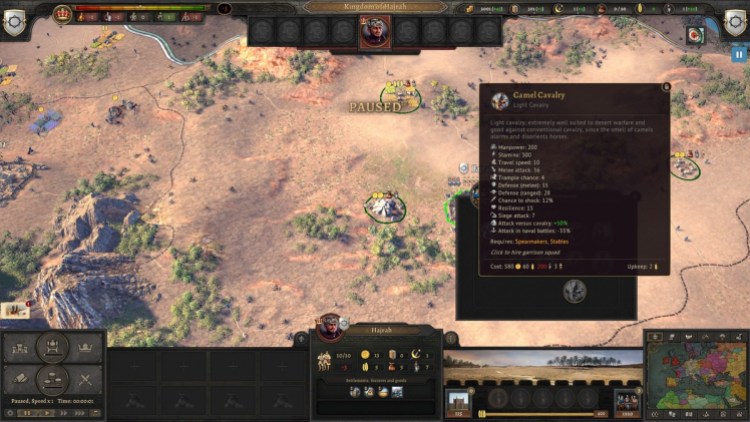 Hajrah can build camel cavalry once they construct the Barracks and upgrade them with the Spear Maker and Stables. Screenshot by PC Invasion

There are, of course, the usual pitfalls of insane AI diplomacy (especially when time comes to throw in the towel) or the frankly rough visuals in the real-time battles or the bizarre choice of voice lines (your general constantly going “my life is precious” or “I must be protected” will not endear them to you). There’s also the bizarre case of all your knights gaining and increasing skills, but only the king aging and dying, which is by itself nearly a premise for a fantasy book.

One point that people may disagree over is losing battles actually wiping out your army. This might be unacceptable to some, or merely encouragement to pick your battles and to retreat when things go south.

In balance, I’m going to say that Knights of Honor II: Sovereign is a good game, but not a great game. From the issues I mentioned before to stuff like a single-province start being nothing like playing a lowly duke in Crusader Kings (and really functionally identical to running a single-province kingdom), it is hampered along the way. But it’s a solid way to reintroduce the series to a new generation. Now build up on that foundation!

Knights of Honor II: Sovereign does quite a few things right, though it could use more polish for many aspects of the game, starting with the voice lines that generals get.