By right, LA Cops should be fantastic. Take Hotline Miami, add your own gameplay twists, rejig the setting and art style, and simmer until done. In this case: Hotline Miami, with a partner character you can either order around or directly control, set to a wonderfully cheesy 70s cop theme. That should be fantastic, and at times, LA Cops lives up to the promise of the premise. But the rest of the time…

Alright, yes, the aesthetics are wonderful. You can see that for yourself, I’m sure. There’s a lovely cel-shaded-ish art style, and everything is in bright pastel colours. There are moustaches and afros and an overweight police chief who shouts at you. The dialogue is as cheesy as the story, which has RENEGADE COPS CLEANING UP THE STREETS. All of which is fantastic. 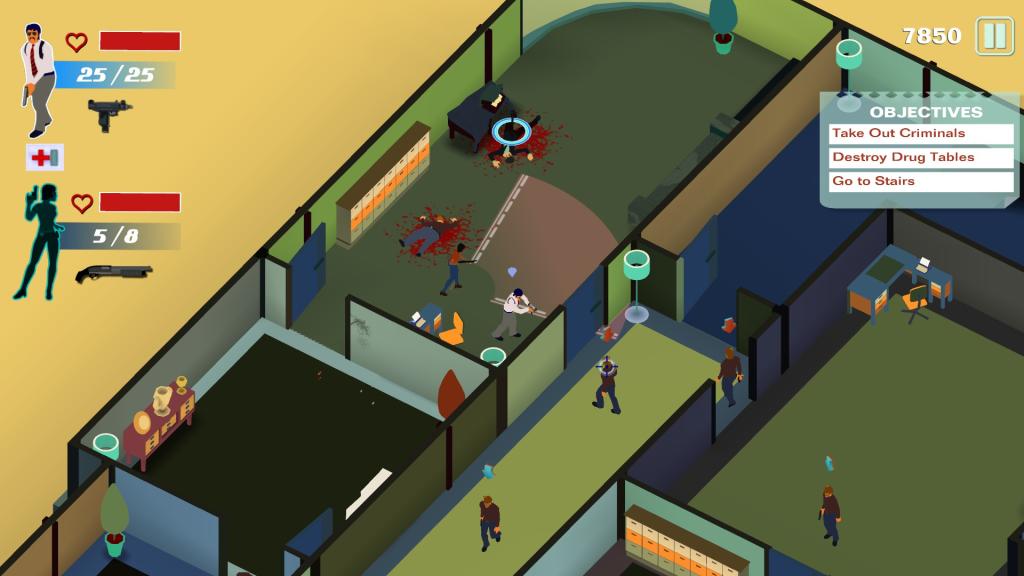 And on paper, the gameplay sounds wonderful. As with Hotline Miami, you die in just a couple of hits, so running around guns blazing won’t get you very far. The point is to carefully position both of your doughnut-chewing protagonists carefully, maybe sneak in and arrest a person or two with a melee attack, and then burst in guns blazing and take out the scum. And when that works, it definitely feels very Hotline Miami. (Yes, we’ve hit the point where “it feels Hotline Miami” is a legitimate compliment.)

Problem one is that it usually doesn’t work, because the partner AI apparently spent a lot of time eating lead-based paint as a child. You can’t pick the direction they’ll face when you order them to a position, and unfortunately, the AI’s regular gambit of “stroll into a room full of enemies while facing backwards” doesn’t work very well, as your foes don’t immediately drop their guns and clutch their sides with laughter. 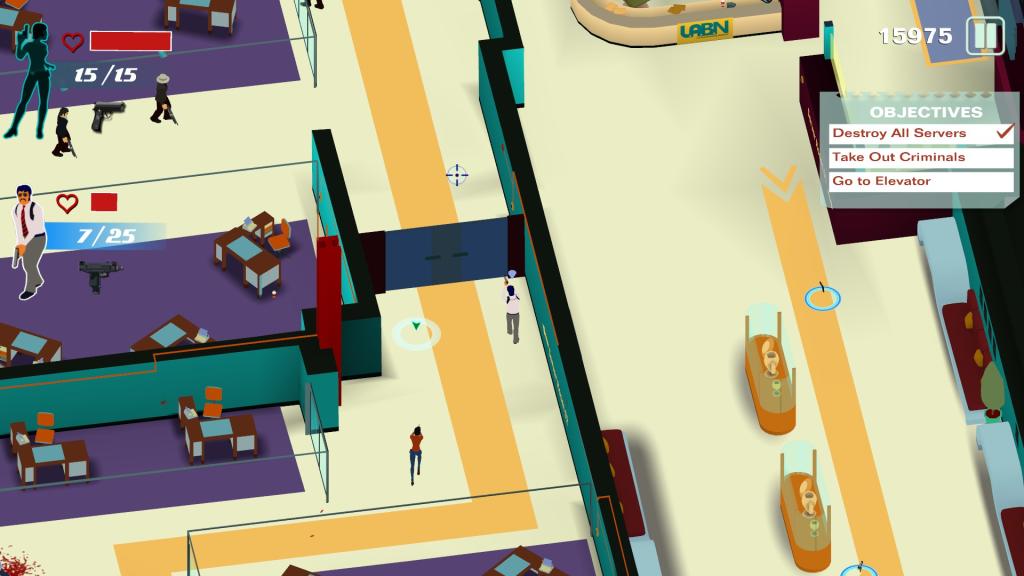 It also doesn’t help that the AI is usually a lot slower on the uptake than the enemies. You can give your partner a shotgun and station them in front of a door, and make sure that they’re facing the door… and if an unsuspecting enemy wanders through, there is every chance your partner will die first. So yeah, you’re going to be going through levels by yourself, only swapping when you die.

Thankfully, it’s not just your partner who has difficulty processing what’s going on around them, because the enemies manage it too. Their ability to hear gunfire seems less related to “how far they are from the gun” and more “how far they are from your aiming reticle.” And possibly “the phase of the moon”, because sometimes they just don’t notice regardless. I have walked into enemies from behind and gently pushed them across the room, and they somehow never noticed me.

An example: if you’re aiming on the other side of the room to an enemy, they probably won’t notice. If they’re behind a wall, however, and you aim at them through the wall and fire once? They’ll notice this and charge through the entire level to get to you. A bit odd, but you can frequently abuse it to your benefit. 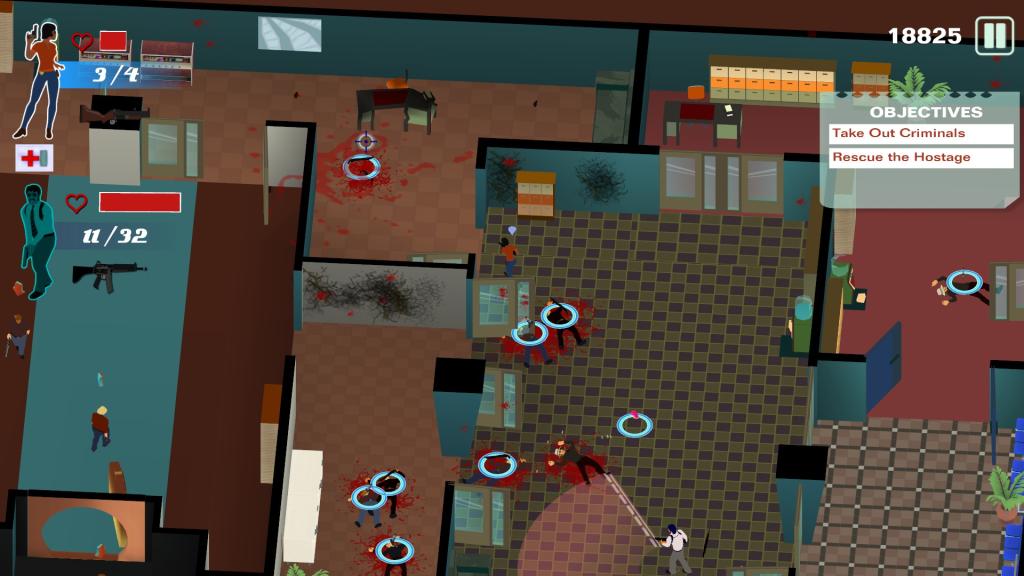 I’m not going to lie: I take a lot of joy in shooting up environments as pretty as this.

Problem two: that isometric perspective looks lovely, eh? Shame it makes it a complete pain in the arse to figure out whether you have a clean line of sight to an enemy. Naturally, enemies don’t have this problem; they’ll fire when they have a clean shot. This is mitigated by the aiming reticle turning red if you’ll hit an enemy (which is tremendously helpful) but if you’ve got a group barrelling towards you through a door or past cover, it can be incredibly hard to know where you should be aiming to make sure you can fire before they do.

So, okay, the game’s big mechanical twist doesn’t quite work, and the isometric problem means it’s not exactly a great Hotline Miami-alike. Unfortunately, that’s far from the end of the problems. 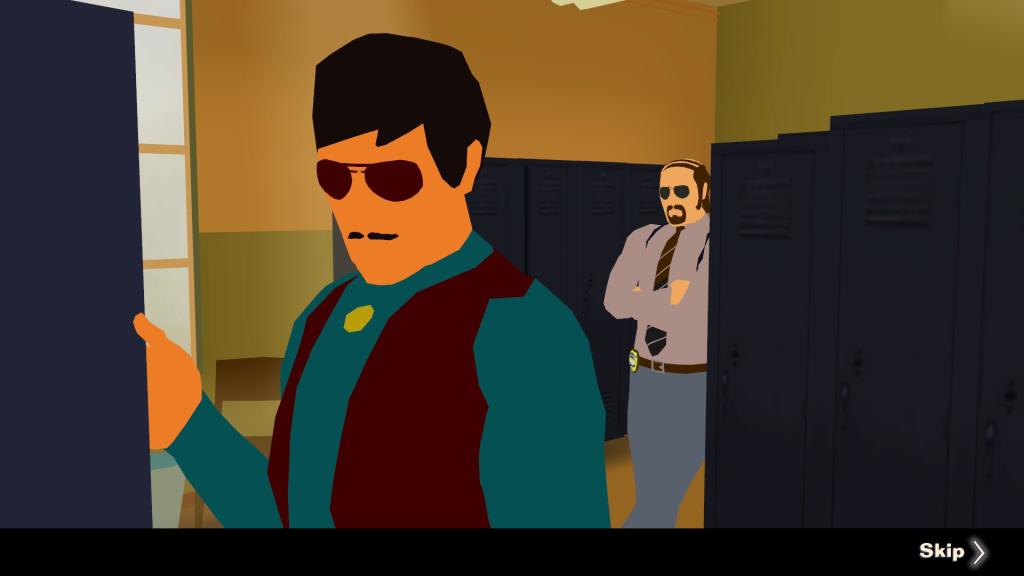 You can certainly complain about the story and dialogue – both of which are paper-thin, but cheesy enough that I rather liked them – but they are at least staged quite nicely.

LA Cops is a bit buggy and has a serious lack of polish, and this is tremendously obvious. Perhaps the most obvious thing is that the walk cycle doesn’t loop properly, which is minor, but incredibly jarring. The problem isn’t so much that the animation jerks when you keep walking in one direction, but that this causes your character to stop for a moment. Keep walking down a long hallway? Expect your character to stop for a fraction of a second after taking two steps.

Or there’s the fact that timed missions are a little bit broken. A few objectives have to be completed in a time limit, and the game employs the usual “if both cops die, you have to restart” rule… except that on these missions, it doesn’t restart the timer, nor does it resurrect the enemies. Which makes these levels completely trivial because, unless you’re going for a high score, you can basically charge at people firing and not care if you die. If you die then hey, they’ll be dead anyway, and it’s a lot faster than carefully approaching every battle tactically. 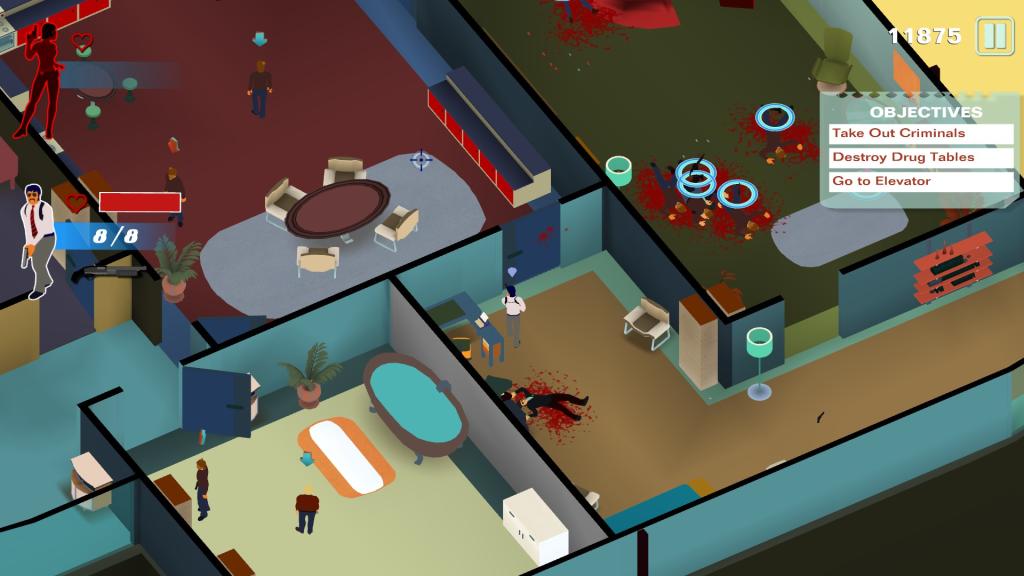 I am pretty sure I can fire a shot at the room to the bottom left and attract one or both of those guards to me, while the others in the neighbouring room remain blissfully unaware.

Or there’s the way that the lock-on system targets the closest enemy to you, and not the closest enemy to the cursor, meaning it’ll ignore the guy at the other end of the room, instead deciding to focus on someone through a wall who poses absolutely no threat whatsoever.

Or there’s the way that the controls feel a little clunky, and movement and aiming feel imprecise. 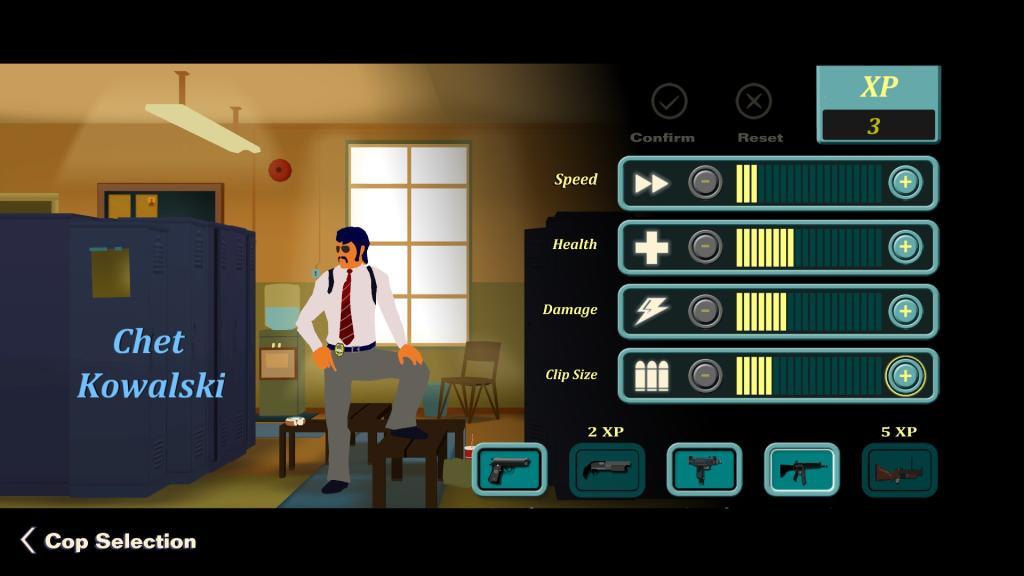 The level up system is a nice idea, but there is rarely a reason to pick a weapon other than the fast-firing, powerful, long-ranged assault rifle, and most of the stat upgrades don’t really make a huge difference.

What’s really sad, though, is this: none of these are massive, game-breaking problems. They’re not issues with the design of the game or the mechanics (apart from the isometric perspective, maybe), and every single one of them could be fixed. Improve the AI a little. Make it a bit more consistent. Fix the walk cycle. Adjust the lock-on. Let me decide what direction my partner should be facing when he moves.

As far as I can tell, these should all be patchable… which makes it doubly sad that LA Cops has been in Early Access for awhile, and it looks like plenty of these issues were pointed out before release. I don’t know why the game was released in this state, but it’s a genuine shame, because when its (many) issues aren’t getting on your nerves, it’s clear that there’s the crux of a decent game here. 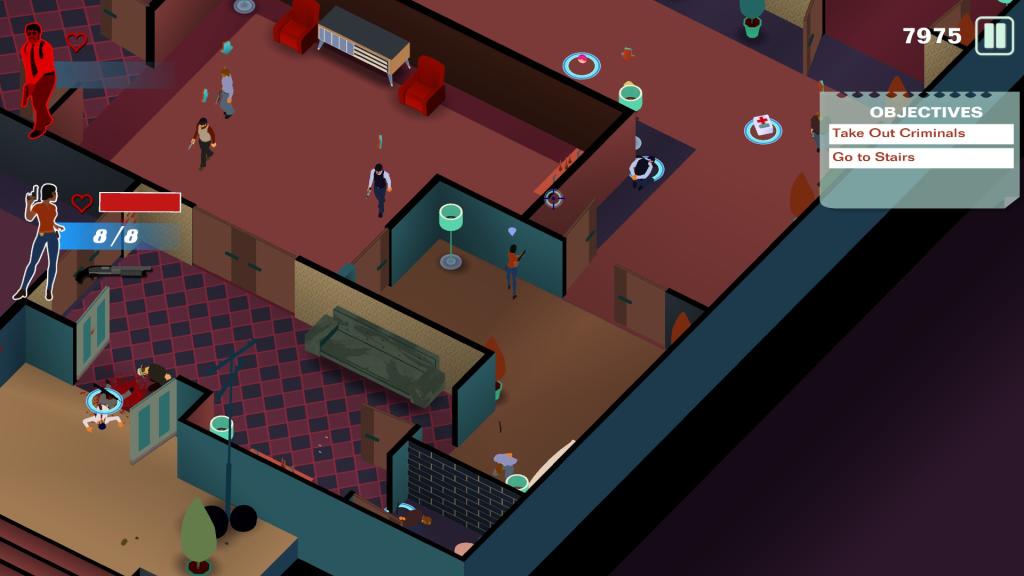 Wait for their backs to be turned. Sneak in. Melee one. Shoot the others. Just don’t involve your partner, or you’re screwed.

The aesthetic design genuinely works; LA Cops is a beautiful-looking game. If I could put my faith in the AI and the lock-on system, bursting through doors with guns blazing would be a fun experience, and repeatedly replaying levels to better my score seems like something I’d do. The level up system is a nice idea – completing missions earns you XP that you can spend on unlocking new starting weapons for your cops, or upgrading their speed/health/damage/clip size – but one that’s a little bit unbalanced, because things like “health” barely matter when machine-gun toting foes mow you down in a quarter of a second.

Even with these problems, it’s not an awful game – it’s just a painfully frustrating one, with so many issues that it feels like it’s trying to sell you a subscription. I wouldn’t recommend LA Cops to anyone unless it’s on sale and you really want to try it, but I would recommend keeping an eye on it. A few patches and a bit of post-release love, and this pastel blaster might be worth reconsidering.