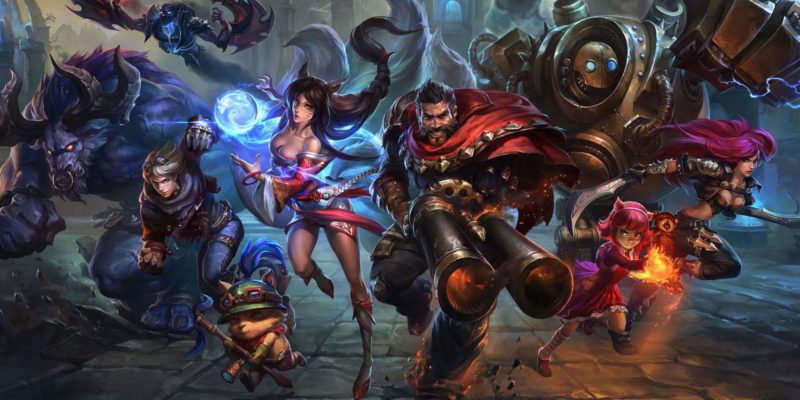 If you’ve seen any gameplay, you know there’s a lot to take in with League of Legends, as there can be up to 10 different characters on the screen at the same time and matches last anywhere from 15 to 45 minutes. The quickest path to learning and improving in this game is to play it. But to do that properly requires a basic knowledge of the meta, certain mechanics, and the map.

As a MOBA (multiplayer online battle arena), the core mechanic of League of Legends sees two teams trying to destroy each other’s base. Besides being protected by its team, bases constantly spawn waves of minions and are located behind layers of turrets that must be destroyed sequentially before the base can be touched. Once a lane’s towers are destroyed its inhibitor is exposed, leaving the diamond-shaped target defenseless; one of them being destroyed spawns Super Minions from the opposite base and opens up the Nexus towers behind it to attack. Each team’s Nexus operates as their health bar; the game ends if one reaches 0. Inhibitor and Nexus health replenish over time, but turret health does not.

Co-op vs. AI Mode is a good place to start for true beginners. As a tool it is mainly useful for learning how to click around; the results are not generally representative of actual gameplay. I recommend switching to PVP as soon as possible, as bots are predictable and it’s better to acclimate to real gameplay sooner instead of later.

To play PVP you need to at least know about the meta, which is an acronym for “most effective tactics available.” League’s is established as 1 player in the top lane, 1 player in the mid lane, 2 players in the bot lane, and 1 player in the jungle. Top lane is home to tanky characters, mid lane is for mages and assassins, a carry goes bot with the help of a support, and the jungle is populated by champions that can suddenly show up and help eliminate an enemy. There isn’t anything wrong with going against the established order, but it’s a good place to start, and if you plan on playing competitively it’s what you’ll be facing every game. 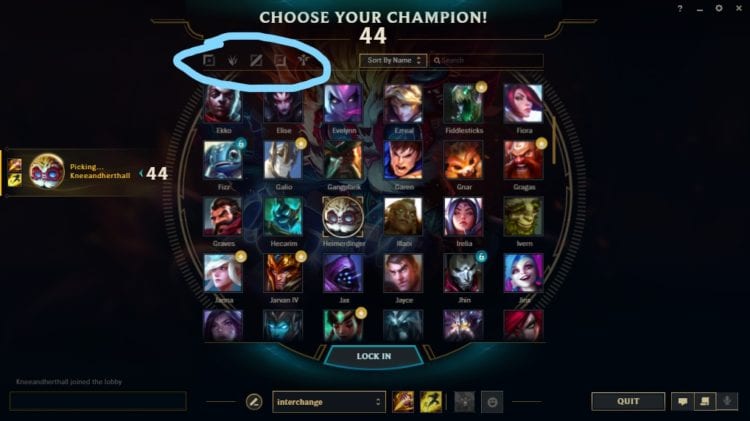 Sort owned champions by their most common role in the top left corner of champion select.

After loading into Summoner’s Rift, you buy your items and take your chosen characters to a lane or into the jungle to farm. Farm, also referred to as minion kills or CS (creep score), is the main way to generate gold throughout a game. Gold is important because it gives access to stats and sometimes extra abilities that give major gameplay advantages. As a beginner, you should take the time to read what the items do in the shop and Google champion-specific guides before games to find out which items are best to build. Gold is generated passively, but different amounts are rewarded on each minion and enemy kill. Denying enemy kills can have just as much impact as killing them would, if not more, because of the Experience mechanic.

Experience is equal to Gold in importance, and aside from not having the passive generation, it is gained the same way. Leveling up gives base-stat increases to a character and provides them with a skill point to be used to power up an ability. Characters generally have 3 spammable abilities bound to Q, W, and E and an Ultimate ability bound to R; each champion has a unique optimal skill order, but a good rule of thumb is to level up your damage abilities first and put points in your ultimate whenever able (levels 6, 11, and 16.) Levels mean a lot in League of Legends; if you’re 12 and your opponent is 14, don’t take them on without your team.

Keep eye on your opponents

Your character needs to be alive to gain Experience and Gold, and for the majority of the game, laners should be more or less evenly matched against opponents. However, League of Legends has an entire role dedicated to helping the lanes at opportune times. When that happens it’s referred to as a ‘gank,’ and the best way to avoid a gank is by seeing it coming. Wards are the way to do this. Using the yellow vision trinket (by default bound to 4) makes a Ward that grants vision for its lifespan. Switching it to red sweeps the area around the champion for invisible objects and wards. And blue grants vision of a faraway area but can be auto-attacked and destroyed once found. Vision-denying Control Wards are available at the shop for 75 gold apiece, and since you can only have 1 on the map at a time, you always should. 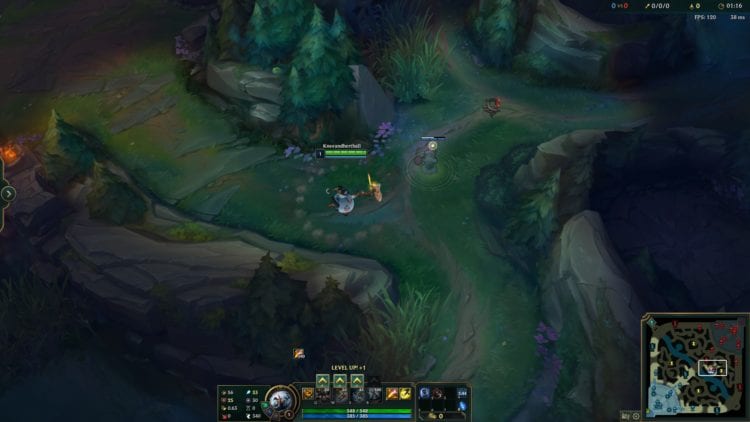 Warding in chokepoints can give a heads up on enemy positioning.

The map consists of the 3 lanes top, mid, and bot; a jungle full of minion camps for each team; and a split on either side by the river. The most important camps are in the center of the jungle sections; killing them gives buff referred to as red and blue. A neutral monster, the Scuttle-Crab, spawns at 3:15; killing it grants vision in the middle of the river. Minion waves spawn from the base every 30 seconds, normal jungle camps come back 2 minutes after being killed, buff camps take 5 minutes to respawn, and each Scuttle-Crab takes 2 minutes and 30 seconds to return to life.

The top and bottom sides of the map mirror each other in shape but differ in the objectives they offer. Starting 2 minutes and 30 seconds into the game, elemental dragons spawn in the bottom-side pit and respawn 6 minutes after being killed. Killing each element gives a team a unique buff, and the element of the third dragon alters the layout of the map. A team killing 4 dragons gives them the Dragon Soul, an enhanced version of the map-changing elemental buff, and enables Elder Dragon to spawn. Killing Elder Dragon gives bonus stats and an execute on enemies damaged below 20% health. Maintaining vision control of the dragon pit is as important as maintaining control of the lanes as a majority of champions can solo the elemental dragons. When alive, Elder Dragon should be prioritized above all else.

The top-side pit is home to the Rift Herald and Baron Nashor. Rift Herald spawns in at 8 minutes; killing and collecting its buff allows the recipient to summon Herald to help push a tower. Herald will respawn in 6 minutes if killed before 14 minutes and despawns at 20 minutes to make way for Baron Nashor. The team that lands the killing blow on Baron gets a buff that turns their minions into a tower-destroying force to be reckoned with.

There is a lot to learn in League of Legends. The above is just some of the basics. The most important thing to remember while learning is that you’re learning. You have to fail in order to know how to succeed.

The Crew 2 gets steep price cut and free weekend