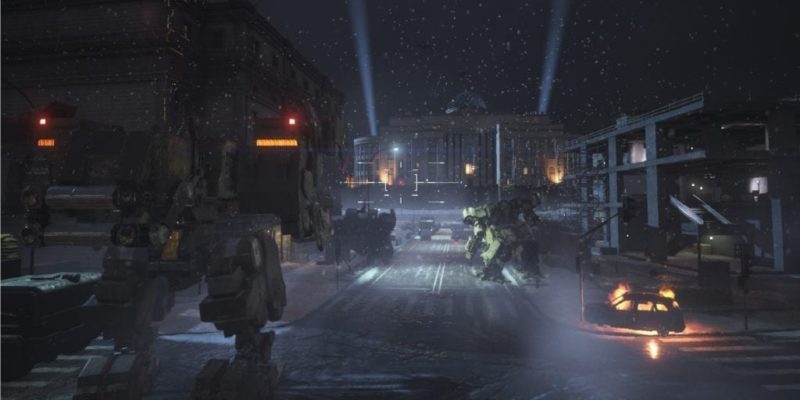 Yoji Shinkawa (Metal Gear series), Toshifumi Nabeshima (Armored Core series), and Takayuki Yanase (Ghost in the Shell, Xenoblade Chronicles, Gundam). These are the names attached to Square Enix’s latest project, Left Alive. This is the hotly anticipated return to the Front Mission universe — the first spinoff since 2010’s Front Mission Evolved. Given that it’s also helmed by veteran developers who are familiar with sci-fi and mech action, Left Alive seemed to have everything going for it. What could go wrong? Well, the answer is: “a lot.”

Please note that we have a technical review that takes a more in-depth look at Left Alive’s graphics, controls, and performance issues. 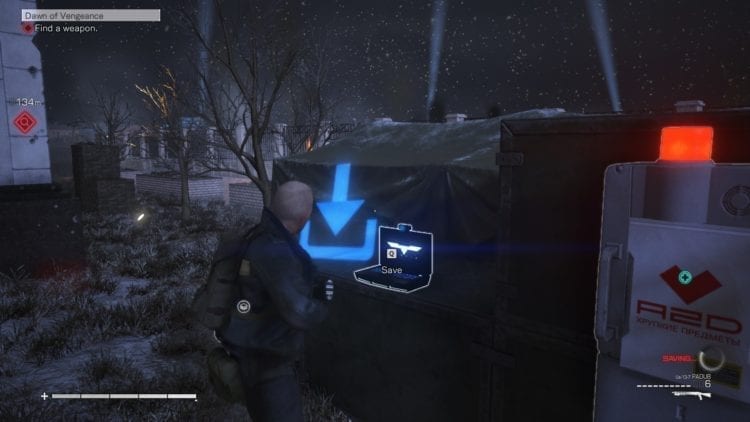 Left Alive has computers that allow you to manually save, even though it autosaves already whenever you interact with one. It seems pointless just like a number of mechanics.

Meet The Novo, Same As The Oldvo

Left Alive takes place in the far future where countries have formed regional blocs and proxy wars are fought with conventional armies backed by wanzers (mechs). The Garmoniyans (a plausible stand-in for the Russians) have just ruthlessly invaded the country of Ruthenia (the sorta-Ukraine). Most of the action takes place in the war-torn city of Novo Slava.

Unlike other RPGs or action games where you follow the exploits of a single character, Left Alive introduces you to three. There’s Mikhail, a young soldier, and inexperienced wanzer pilot. There’s Olga, a police officer who finds herself in the wrong place and at the wrong time. And finally, there’s Leonid, an assassin who escapes captivity during the chaos in Novo Slava. The fates of all three are intertwined as they meet one another in the ruined city. Along the way are other characters. Most are just searching for a way to survive or escape, while others are looking to make a profit.

The story isn’t something that would earn Left Alive any awards. It’s your bad B-movie plot where certain characters lack nuance and events unfold so predictably that the scant twists the game has could be seen a mile away. Certain characters might even be unlikable or annoying to a degree. 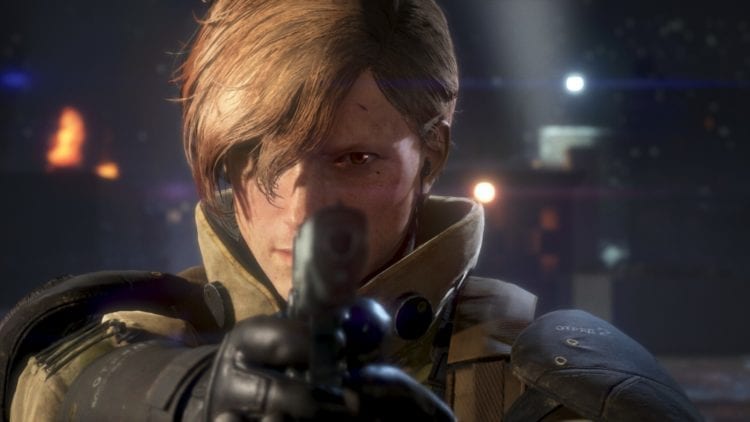 Speaking of unlikable and annoying, there’s your trusty comms partner codenamed Koshka. Remember how certain games like Metal Gear Solid, Destiny, or even Portal, had characters you’d listen to for hours? Well, Left Alive’s Koshka makes you want to find a way to mute her due to incessant warnings of “Caution: The enemy is approaching.”

She does this every time an enemy soldier, wanzer, or drone is nearby. It doesn’t matter whether they’re patrolling or just standing with their backs to you. If they’re within proximity, the game ensures that you know. It gets to the point that you start to wonder if developers never noticed how grating it becomes. 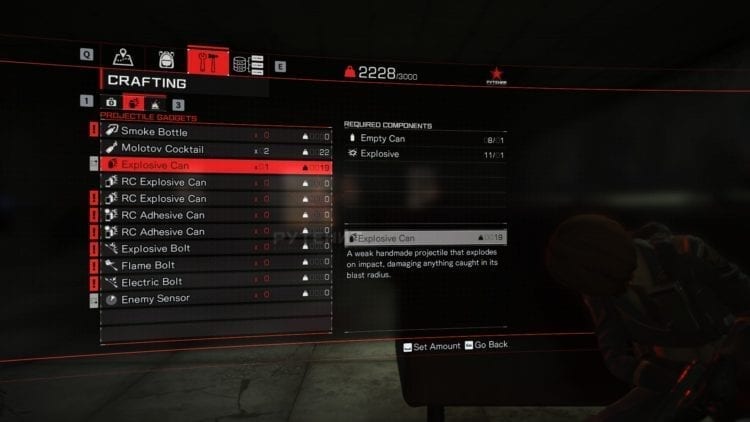 I’d like to craft some items in peace. That includes random warnings from a disembodied voice.

Left Alive tries to be a stealth game all while eschewing mechanics that made stealth games enjoyable. Instead of a minimap, you’re forced to keep reopening your map (tab or M key) to spot anything of interest. Instead of silent takedowns and disarming/knockout techniques, you’ll have assault rifles and grenades. Even the use of melee weapons like crowbars and shovels becomes clunky after a while and you can’t even repair these.

The lack of stealth combat in a stealth game was a strange design choice given that the Metal Gear series, and other games such as Assassin’s Creed and Dishonored, already perfected the craft. All that Left Alive had to do was refine the template. Instead, it completely went the other direction. 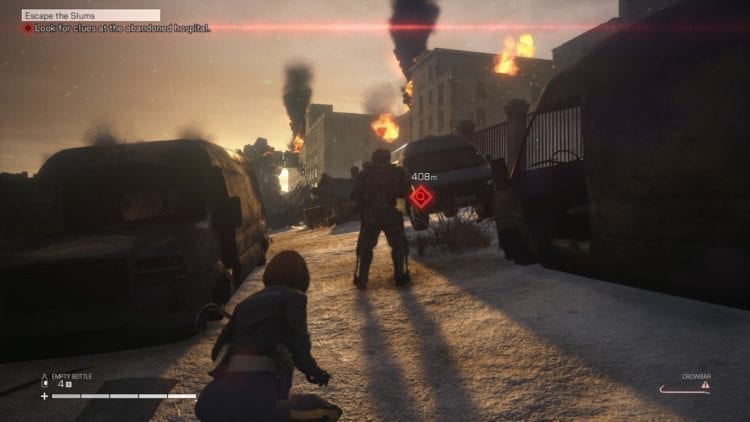 I’m waiting for the button prompt to kill, knock out, or interrogate. There isn’t one. So you just smack someone with a crowbar.

In Left Alive, you can pick up numerous components so you can craft throwable items like bombs, exploding cans, and molotovs. You can also create traps such as landmines, remote-controlled detonators, and tripwires. After a while, you’ll ask yourself what’s the point. The “A” in Left Alive’s “AI” might as well stand for “atrocious.” Enemies are almost bereft of any tactical sharpness.

For instance, you could walk up to an enemy soldier and he probably wouldn’t see you. You could fire two shots before he retaliates. Meanwhile, another soldier might suddenly detect you while he’s walking and facing another direction. Wanzers? You can pass them while sprinting. You could even stand in front of them a short distance away and they wouldn’t fire. Or maybe they will? Who knows? 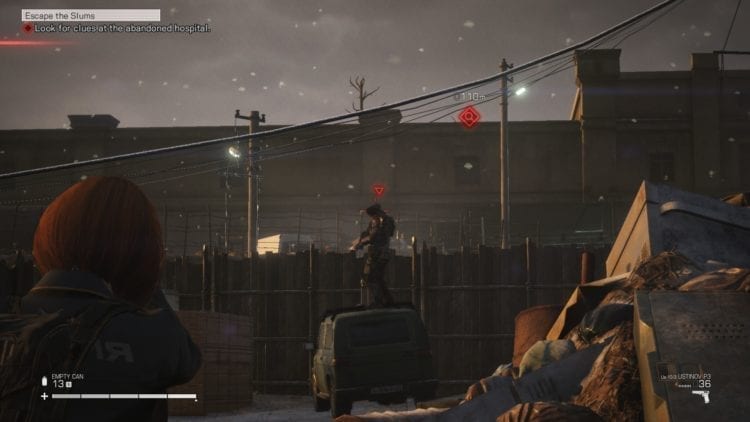 Some enemies would glitch, hopping on and off platforms or vehicles. If you’re in a pinch, try hiding inside a bin and you’ll see soldiers Mario-jumping atop fences as well.

You know what, I take it back. “AI,” in this case, stands for “atrocious inconsistency” because it’s as inconsistent as it gets. Nevermind the fact that over a dozen of Left Alive’s missions will usually have 30-50 hostiles and you’re all by your lonesome. It’s one thing to be challenging, it’s another to be borderline frustrating.

This AI flaw is also present in friendly NPCs. The survivors you encounter can be saved, but the only commands you can initiate are for them to wait or to keep moving. They can neither fight nor flee to a safer area, they’ll just cower when enemies are alerted. There are also other NPCs that offer a dialogue choice (some might even ask for items), but you’d hardly care about them. 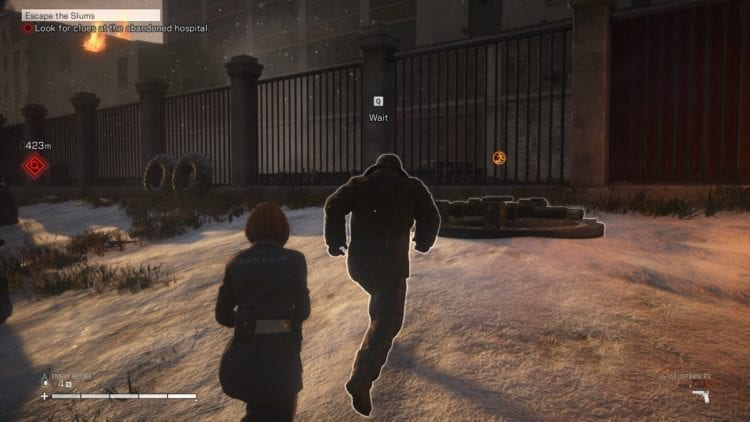 Survivors follow a path towards an underground shelter. This barebones feature has but one mechanic: Kill all enemies first so they can jog safely.

As for combat controls, I analyzed these in detail in our Left Alive technical review already. The controls are unintuitive and poorly designed, whether you’re using a gamepad or a mouse and keyboard setup. For instance, you’ve got multiple item wheels for your healing/self-use items, throwable items, and traps — and yet there’s only one button that lets you use them.

If you’re in the middle of a firefight and you need to throw a grenade and heal, this is what you need to do:

Who thought that was a good idea? After several hours, rather than relying on tactics, I just ended up “rolling for victory.” It’s basically just rolling forward and blasting an enemy with a shotgun. 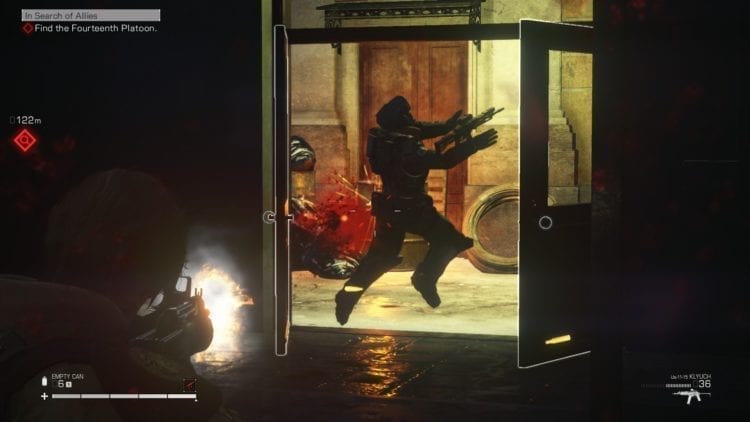 Enemy combat scripts will make you slap your forehead. Some will just stand there, while other troopers will actually run past you for no reason! Also, no matter the weapon, they’ll fly and flop like they got hit by a shotgun.

You might be thinking: “Hey, that’s while you’re fighting on foot. What about mech combat, huh? That should be exhilarating, right?” Well, no, not even close.

The moments where you get to pilot a wanzer are few and far between. Sadly, most of these feel like scripted encounters and less like full-fledged missions. Some have you facing off against multiple wanzers, others have wanzers mixed with tanks and helicopters along with regular infantry. There are also times when you’re on foot and you’ll need to take out mechs with conventional weapons.

It’s just unfortunate that controls are awkward, clumsy, and cumbersome. I mean, of course, since they’re supposed to be gigantic bipedal monstrosities. But still, how do you make “fighting with big robots” so boring? Even the special effects such as explosions and background destruction feel muted and dull. Did you know well-placed boxes can stop speeding, metallic behemoths? I sure didn’t. 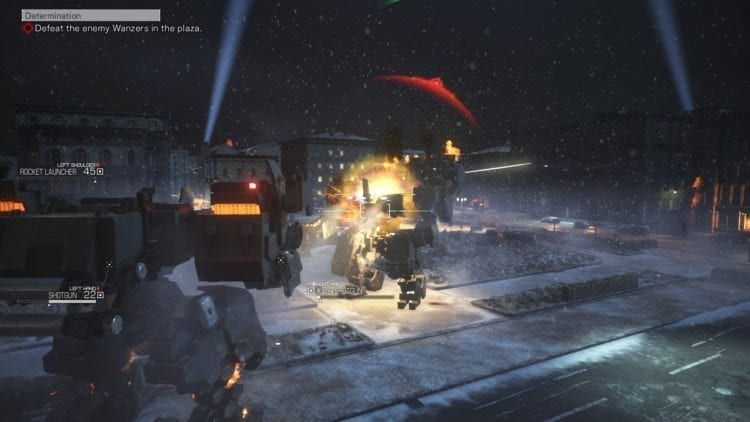 If you can look past the control scheme, mechanics, gameplay, mission structure, and narrative, then you’ll probably find some enjoyment in Left Alive. That is until you look at the same backgrounds and locales over and over since many of Left Alive’s missions (split among the three characters) take place in the same areas. Even if they don’t, the interiors and layouts all look eerily similar. This could’ve been forgiven had the graphics been outstanding, but they weren’t, and I’ve explained this further in our technical review. It’s as though you’re still playing a game from the PS3 and Xbox 360 days… the types of games that didn’t utilize the full capabilities of those consoles.

Worse is the fact that you might encounter crashes from time to time. In my case, some crashes occurred while I was checking my inventory or stash, while others occurred during a mission’s loading screen. 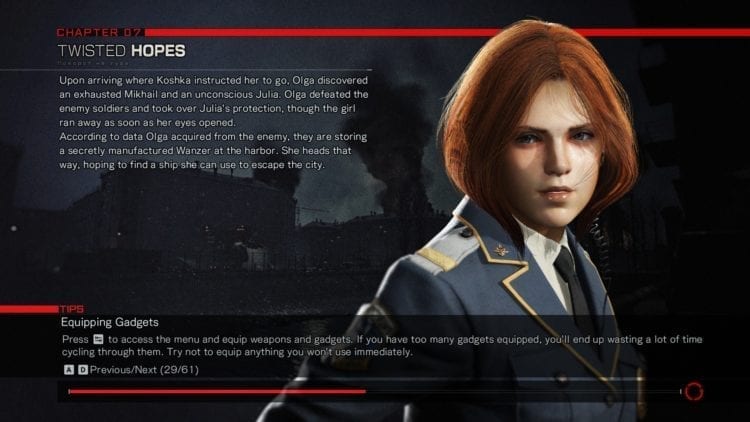 It’s also hilarious that there’s a New Game+ mode that gives you additional perks each time you complete a playthrough. It’s as though the developers assumed you’ll want to keep playing more than once, if at all.

Are there a few redeeming qualities? Well, yes. You could, technically, find that elusive fun factor and the cutscenes are, at least, decent. You’ll also find some extra items, like supplies from players that died, and even World of Tanks collectibles. That’s intriguing, I guess.

Overall, though, this is a poor offering from Square Enix and one that tarnishes what could’ve been a triumphant return to the Front Mission franchise. All the talent and experience in the world from brilliant creators led to this farce of a spinoff. The game might be called Left Alive, but it’s barely breathing at this point. 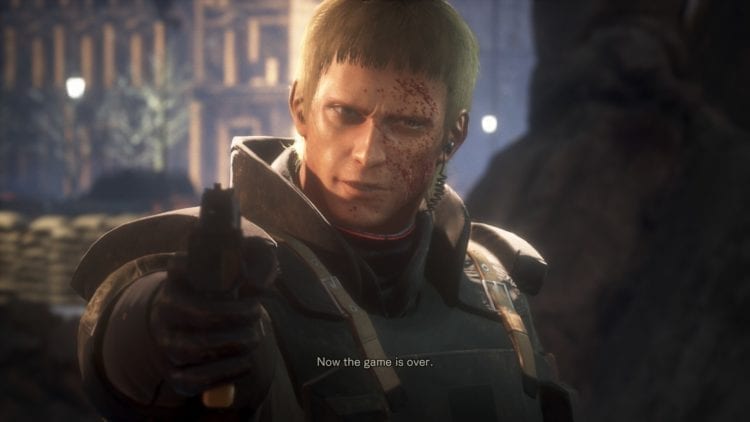 Square Enix's Left Alive takes us back to the Front Mission universe. Unfortunately, numerous issues hold it back that it might as well be left for dead.