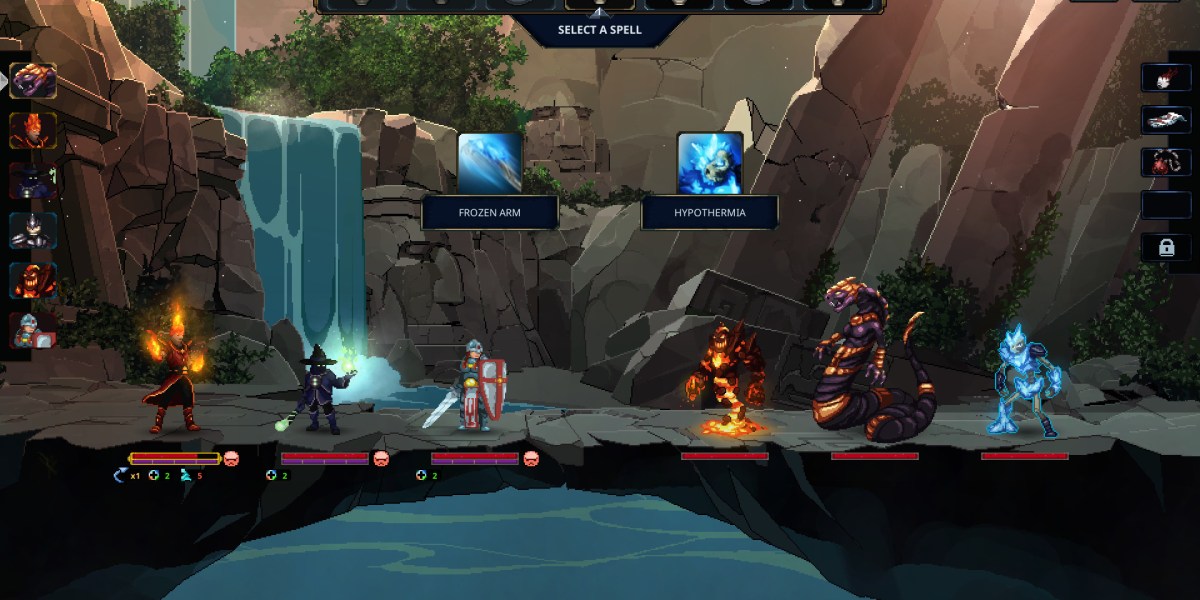 You’ve already cleared dungeons, killed their end bosses, and stolen the loot uncountable times. Maybe you have even managed to run a dungeon as a keeper of sorts. But how about running a dungeon as a business; a business that wants to attract adventures to die? Then you need to play Legend of Keepers.

Damn, this is where I usually put my plot paragraph, but that’s basically it. All the dungeons in the fantasy world of Legend of Keepers are run by a corporation staffed with literal (and not metaphorical, like in real life) monsters. You are a manager of a dungeon, which makes you the end boss. It’s your job to populate a linear dungeon with traps and monsters to kill or scare away groups of adventurers.

Instead of a singular campaign, Legend of Keepers allows you to choose your dungeon master. Each of the three has their own, small five-run campaign. Every master also comes with their own skill tree, attacks, powers, and a single, specific room upgrade. They also have what is essentially a specific monster type. For example, Maug the (centaur) Slavemaster controls all sorts of orcs and goblins, while the Enchantress (a tree spirit-woman) gets elementals. These rosters are then boosted by skeletons and demons.

I don’t see this situation as winnable for the hero.

How to become a true Legend of Keepers

The real meat of Legend of Keepers is the active dungeon defense. Your dungeon is made up of rooms connected in a straight line: two for your monsters (up to three per), two for traps, one for your spells, and one for you. Your room is always the last, but the rest have their places scrambled every time and no two rooms ever go in a row. But these are the basics, and later you’ll unlock more types of rooms.

“Oh, we have a bat swarm on the menu? Marvelous!”

In monster rooms you place up to three monsters and decide their place in line: back, middle, or front — as seen in Darkest Dungeon and Monster Train. You get up to six monsters to choose from per room, that is if you did well in the management portion of Legend of Keepers.

You want to have the best mix of monsters for the room, as resistances are key to understanding the game. Besides HP, morale, speed, and power (the most abstract of stats), each monster and adventurer has five resistance stats: flame, ice, armor, nature, and air. Guess what? Attacks are also keyed to same elements (and morale) for their attack type. So your first task is to determine what damage the adventurers deal (and to which spot in the line), and to place your monster accordingly. And if those monsters deal damage that the heroes are susceptible to, that’s just peachy!

Rocks fall, all your dudes die

Heroes in Legend of Keepers are individually a lot more powerful than monsters. A vast majority of the time, they can take out your employees in two or three hits. More often than not, your first room will get wiped out. Quite a few times it will come down to you — as the final boss — to personally destroy the pesky humans. Fail and you die, which means restarting the chapter. You have to play it smart to overcome heroes, their resistances, and their powers.

That fire fox jumps a target if it manages to kill the original one, so don’t place your -50% fire monster in the middle.

Luckily for you, as heroes have attacks, skills, and passives, so do your monsters. Each has an attack and two more slots for either attacks or powers that get unlocked (in a predetermined manner, so you don’t have to think about it too much) as you level them up during management. You need to manage it so that the monster powers combo well, not only for dishing out straight-up killing power, but also for comboing with the abilities of other monsters.

Naturally, like in any game like this, you can impose states on heroes (and they can impose them to you). States reading 90% are easy to understand; they either make an enemy weaker against a damage type, or deal damage over time (DoT). An important thing to understand about DoT stacks is that they are not only a timer, but also a multiplier of how much damage a stack does. Go beyond those simple types, and then you’ll get into fun stuff like certain attacks ricocheting to heroes who have negative resistances to certain elements, or being more effective if the target is already suffering from a specific state. There’s also the cyborg walker that attacks, and if the enemy is under 50% morale, attacks again.

Crack the enemy’s will to crack their skull

Speaking of morale, it was already a thing in the Early Access version of Legend of Keepers, but it was mostly like an alternate HP track. Trouble is, you basically had to specialize in morale or HP damage. And since morale attacks were much rarer, well, the choice was obvious. Now, hero morale can drop from their friends dying or running it away. As it depletes, the heroes take more damage — up to 75% more if they’re down to their last segment. This makes comboing morale and regular damage monsters a lot more important.

Kill heroes gives you blood, spooking them away gives you tears. Those are the two lesser currencies of the game.

If you play your cards well, the first monster rooms, your powers, and traps can whittle down the hero group so much that some monster in the second room can one-shot a fully healed good doer.

But that’s already going too deep into the weeds of Legend of Keepers’ combat mechanics. We’ve barely even touched management. In this game, campaign chapter is split into weeks — 43 of them, in total. Each week, you get to choose one of two or three activities. Some weeks are dedicated to dungeon combat, in which case you can choose one of three groups of adventures to face, weighting their rewards versus group difficulty.

You always see what the upcoming two or three weeks will bring. The weekly activities could be stuff like buying monsters and traps (thankfully, the merchant deals in both), upgrading your monsters or traps (regrettably, not at the same time), visiting the doctor as the dungeon keeper (when your natural regeneration doesn’t help), empowering your boss, and more.

If you’re having a hard time, you’ll usually be able to choose a group of scrubs to fight. Notable exceptions: twice chapter-ly champion fights.

The best events in Legend of Keepers stem from its random nature. The choice literally named “Event” can be anything, from an unexpected windfall, to a business proposition, to some complications at the workplace that require either an investment of capital, taking some penalty for no benefit. They’re always a fun choice, because unlike with purchases or training, you don’t potentially don’t need money to get anything good (until you do). And you might even get earnings if you take them up, so it’s always a more lucrative choice than just wasting a week.

‘Pillaging’ takes a few of your active monsters and gives you one of three quests to choose for them. Each quest will have different chances to negatively impact one or more of your monsters for guaranteed (though not always) chance to gain riches, monsters, or artifacts (these have meta effects in the dungeon). ‘Business trip’ is a more stable version of Pillaging: three choices, each affecting a monster, but you always know what you’ll be getting and how long will your employee be out of action.

Events aren’t the only things that can take out your workers in Legend of Keepers. Sure, heroes will kill them in the dungeons, but the benefit of working for literal company for monsters is that necromancers raise them back up for free. Still, getting brutally murdered puts a damper on the mood, so each death will sap your monster’s morale. If it goes out, a monster will suffer a breakdown and become unavailable for a time.

Dungeon backgrounds are always great, while some traps can be really weird.

To avoid breakdown, you put monsters that are feeling close to snapping into reserve. This rotation of forces is an important part of the game. You never start the chapter with a full 12 (you know, six per room), and I don’t think I’ve ever had more than 16 monsters at a time — and that’s with me having gotten some experience during Early Access. You’ll have to think hard about the mix of monsters you’ll be bringing to the field. This, as well as you never knowing what heroes you’ll face (and the chance that the group will have a wizard that switches monsters around randomly at the start of the fight), prevents easy access to One True Strategy, which is always a good thing.

At the same time, I should mention that Legend of Keepers is a humorous game. When presenting a setting where a monster corporation is running all of the dungeons, it has to be. And most of the time, it’s adequately funny, though the jokes do get repetitive due to the repetitive nature of the game. Overall, I’ve definitely seen worse.

The necromancer lady was the last champion I faced in my Maug campaign, and she did not survive past the second group, which means I was getting good!

I’ve definitely heard worse as well. The most iconic sound of the game is definitely the evil laughter accompanying your embarkation on a new dungeon defense, but the rest is neat as well. After all, gory pixel art is only half the battle. You need fitting audio as well, and Legend of Keepers delivers.

Legend of Keepers is a game that’s a lot smoother than its title. Seriously, I had written the whole review for “Legend of Keeper” before catching my mistake in editing. The art is fantastic, the writing is fitting, and the repetition might be repetitive, but not too much so. The campaign format leaves the doors wide open for future DLC, and the game already has mod support. But it’s too bad that some modders (the ones not porting Heroes of Might and Magic III models) are only interested in putting more anime waifus into the game.

Legend of Keepers is a fairly engrossing game with a simple yet fun gameplay loop and glorious gory pixelart.