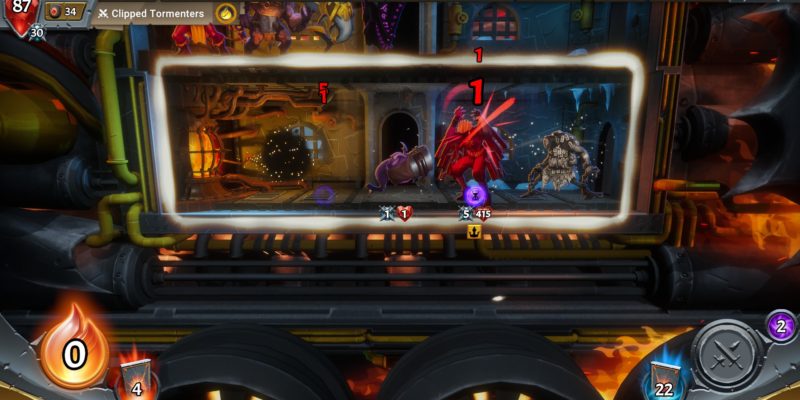 This is not “card games on motorcycles.” It’s card games… on a train! A train through Hell! Hop on the Monster Train from Shiny Shoe and have some murderous fun.

Despite what the name of the game would imply, this isn’t some kids game about overcoming a train full of Halloween specials. (Yes, I wrote something like that in the preview. No, I still can’t get over that title.) The game is about using a collection of denizens of Hell to transport the last remaining shard of the Pyre to reignite the fires down in the 9th circle. Along the way you have to fight the legions of Heaven that plunged the place into icy darkness.

The Devil is a gambling man

Monster Train mostly reminds me of Slay the Spire. But instead of choosing a class, you choose two clans of Hell to make up your deck. Instead of using your cards as attacks, you summon monsters and launch spells. Instead of fighting on a static battlefield, you have three levels of the train to defend; the enemies start on the first. After a single round of battle, the survivors move up a level until they reach the fourth where the Heart is. Then it becomes a battle to the death.

It works similarly with bosses, who are the last wave of attackers. They fight until they or every demon (or shark, candle man, whatever) on the level is dead, then freeze it over and move up. It’s generally inadvisable to let them reach the top. And don’t worry about frozen levels — they thaw for the next fight. 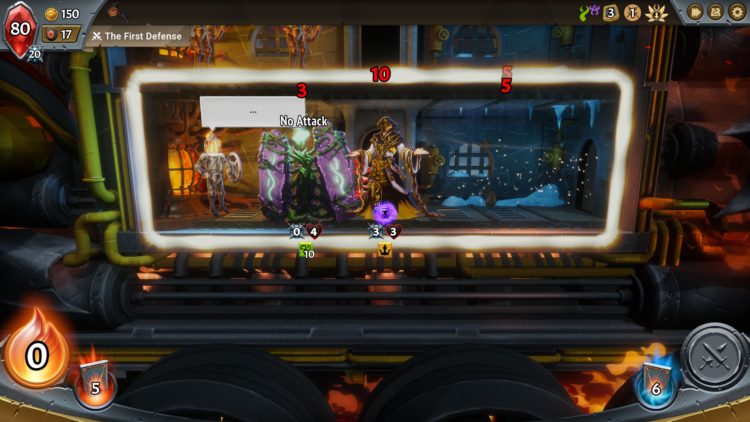 The battles in Monster Train take place at the border between circles of Hell. Then you traverse the circle itself. No fights there, but you get to choose from two paths, each of them holding different opportunities for recruitment, upgrades, or replenishment. Do you want to upgrade your troops or spells? Would you rather get a random artifact or more money? Do you feel the need to duplicate a powerful card — or perhaps discard useless ones?

No two rides are the same

Either way, you don’t have this fine degree of control over cards and units when you start the game. Before each Monster Train run, you choose the Hell clans to make up your deck. The primary clan will supply the champion, the free, specially upgradable unit that is guaranteed to be in your hand at the start of every battle. Your starting deck and the cards you encounter on your trip will be a mix of spells and monsters from both clans. 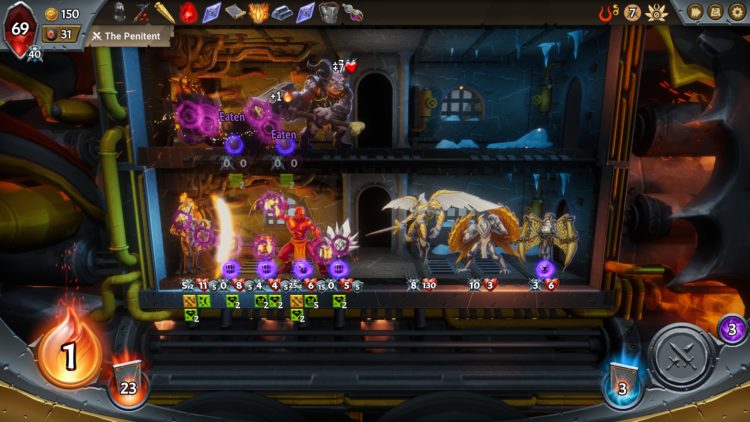 Most of the troops on my level are snacks.

The clans are different both stylistically and in the way of abilities, so your combos can go wild. Do you enjoy the Hellhorned demons and their simple approach of using armor, range, and direct attack spells to hit the enemies at the back of the line? Then perhaps you want to partner them up with the Awoken, the soul-forged plant life that offer a ton of healing as well as Spikes that damage the attacking enemy. Or maybe you’d like to have armored sharkmen hold the line and angry mermaids provide much needed swipe attacks to damage all the enemies on the floor at once. It’s all up to you.

Monster Train also awards you a choice of a random artifact and champion upgrade before you start your run. And if you up your Covenant level — the level of difficulty that can be raised by completing runs on the highest unlocked level — you may get both more cards and more obstacles.

Monster Train runs wild on you

But it’s not like the regular enemies aren’t enough. From the mortal followers of Heaven’s armies to the wingless Clipped to angelic Winged, you’ll face an ever increasing level of resistance before you fight the Seraph for access to the pyre. The enemy has a bag of tricks hardly smaller than yours, providing a mixture of weak creatures with powerful buff abilities, frontline beefcakes for them to hide behind, mid-range bastards who are just annoying, and everything in-between. And if you’re a masochist, you’re always given a choice to increase the difficulty of the battle in some way (like having less energy to use cards) for some boon. 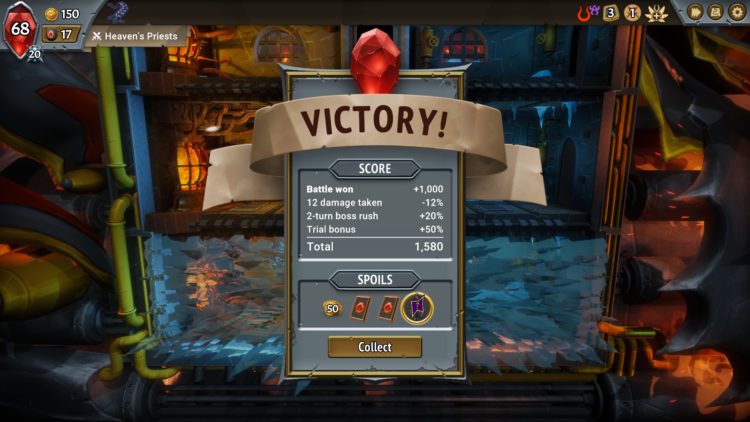 The post-battle screen has also been updated.

Previously in the preview build, the pre-battle screen allowed you to read the fluff of the units you’ll be facing, but it has now been replaced with information about their abilities. More useful than before, but not as flavorful.

In the end though, the writing in Monster Train is still great, which isn’t something you expect to hear about a card game (with or without motorcycles). The art direction is great as well, never too cartoony or too grim. Going away from beta and becoming a real game just added a few more transition effects, in addition to giving the shopkeeper catman a new appearance.

All in all, Monster Train is a fun game. I have no idea how one would be able to win it at the really high covenant levels, but a lot of pro-level play escapes me in any genre. So if you liked Slay the Spire, it’s a game you’ll enjoy as well. And if you didn’t like Slay the Spire, well… you read that paragraph where I explained how different Monster Train is, right?

Monster Train is a very unique take on the Slay the Spire formula, with great writing and art direction and gameplay that invites you back for many more rides.