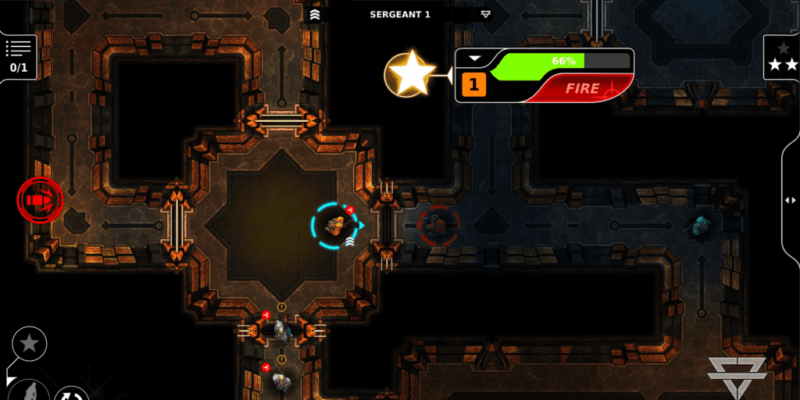 It’s difficult, and probably even a little foolish, to write about Legions of Steel without mentioning Space Hulk. Both are early 90s miniature-based board games, and both pit tooled up marines against a dangerous foe in confined corridors. I’m sure Legions of Steel fans get sick of the Space Hulk comparisons though. For all the similarities, this version of soldiers-vs-nasties-in-corridors does distinguish itself in meaningful ways.

While Space Hulk took ‘inspiration’ (lets be generous here) from the Aliens dynamic of a swift moving, close-quarters predator against slower, militarised forces, Legions of Steel adopts a more equal approach. The enemy in this game is an unrelenting army of self-replicating machines, all of whom are just as capable of using guns as your own soldiers. 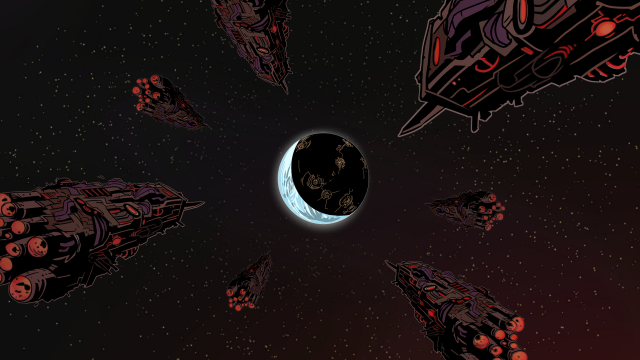 The story, such as it is, advances through rather neat graphic novel-styled interludes.

Some of the tactics found in Space Hulk – locking down corridors with marines set to the Legions of Steel equivalent of Opportunity Fire/Overwatch, making sure each soldier is covering one other as far as possible, quickly adapting to changing circumstances or unfortunate dice rolls – all apply here. But an enemy in possession of firearms definitely changes the dynamic. Foes won’t just be charging down a corridor towards you, they’ll also be returning fire. Opening a door in Space Hulk might reveal a surprise Genestealer. In Legions of Steel, it could reveal a machine and a possible shot to the head.

Having not played the original board game, I’m not in a position to say whether this adaptation is a fully faithful 1-to-1 translation. It certainly feels that way though, with just a few medium-based changes like dice rolls transposed to percentage “to hit” chances, and the ease of having a User Interface determine whether a soldier is in a ‘running’ stance (rather than having to keep track of it with a little plastic counter or by memory, or something)

For the same reason, I can’t say whether the main, ten mission, single player campaign is lifted straight from the board game either. But the separate tutorial campaign looks like it was added specially for this version. It’s a fairly lengthy (it took me around an hour and a half to go through every stage) step-by-step introduction to Legion of Steel’s mechanics, and does a good job addressing special rules like command points and suppression fire in dedicated mini-missions. 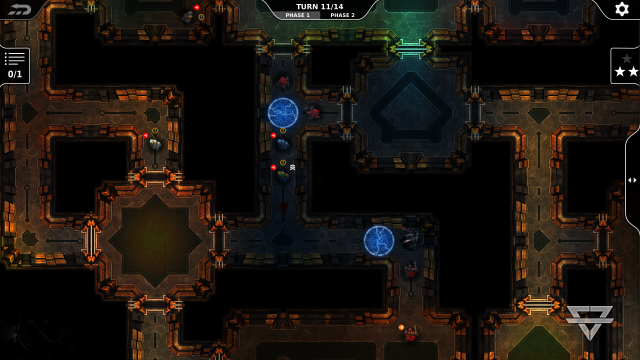 Those blue things are Force Walls, which in this image are slightly delaying the time to my total obliteration.

Strangely though, the tutorial does neglect a few important things. Pre-turn initiative rolls, which determine who gets to move their units first in a given turn, only show up in the main campaign. Same goes for the ability to level up the two Sergeant and Corporal units. The tutorial levels also tend to operate on special rules, like all shots automatically hitting. This is understandable for teaching purposes, but has the side-effect of imbuing the player with a sense of security in certain tactics that the main campaign will quickly dispel.

Legions of Steel is, after all, partly a game of chance. Risk can always be minimised (as in other miniature adaptations like Blood Bowl,) but, no matter how well prepared you are, there’s a chance that poor luck will screw you. Conversely, very good luck can also provide moments of delight and skin-of-the-teeth victories.

For every game where two of your finest commandos manage to miss point-blank shots on a mission-critical terminal, you’ll have a plucky soldier who survives a hail of laser fire and completes the objective with a flukey grenade toss.

More often than not, though, success will be determined by how well you deploy your troops and how suitable your strategy is for a given mission. It can be possible to recover from an unlucky loss of a unit or two. But if you’re sloppy in your movements and leave clear openings for machine AI to exploit, you’re going to be in serious trouble. 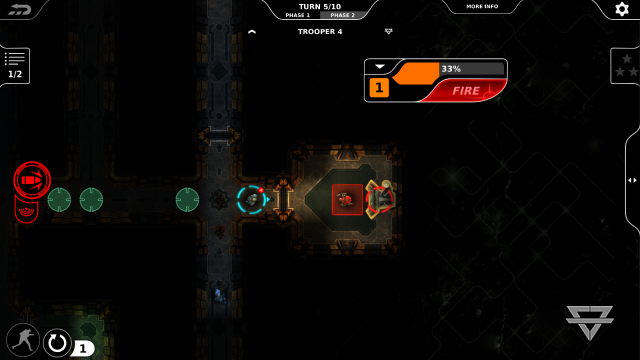 You can’t tell, but this is my last remaining soldier and he needs to make this shot to win the mission (he didn’t.)

The main Legions of Steel campaign missions are quite effective at prodding the player into adopting different strategies. From basic ‘hold this position for ten turns’ defensive exercises, to more complex ‘protect a bomb carrier through twisting corridors while under heavy enemy pressure and a time limit,’ each level has its tests.

Throughout, the machine AI provides a competent and sometimes surprisingly capable opponent. Some of its behaviour is predictable (and possibly slightly scripted, as in the evacuation missions where it seems to know your officers are worth more points and makes a beeline for them,) but it also managed to catch me out at times with some smart positioning or use of overwatch.

Later encounters introduce a fog of war effect (and a tool to scan limited areas,) which encourages further caution and pops up the tension a couple of notches.

However, a couple of the missions based around rapid movement can be almost trivialised by a pair of Legions of Steel mechanics. The aforementioned initiative rolls become crucial for these levels because they can effectively keep you one turn ahead; and the marines are able to spend up to three command points (two from the Corporal, one from the Sergeant,) boosting their roll. These points can be saved for the turn itself and spent on other useful things like a one-off bullet dodge, but it’s always tempting (especially in missions where you need to keep moving) to practically lock up the initiative roll.

Combined with the movement bonus both officers can receive pretty early in the game, these ‘race’ type missions end up fairly easy. That’s not so much a shortcoming of this adaptation, more of an exploit of the game’s original rules. 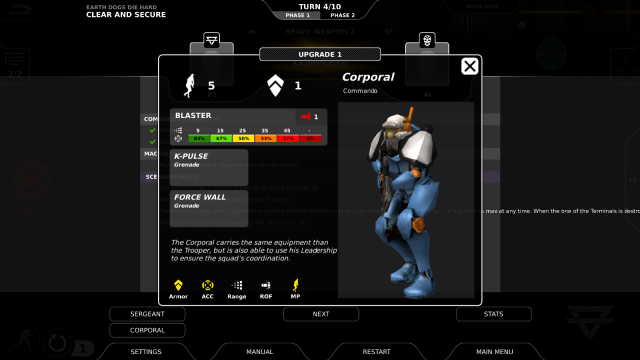 Each successful mission gives you a point with which to boost your command units.

Legions of Steel is also available in iOS/Android form, and while the UI has been tailored for the PC release (there are some helpful hotkeys in our version,) the need to drag and drop command points across most of the screen is a pretty clear hang-up from the phone release.

Other minor UI quibbles aren’t really platform-related, but it would be nice to have a method of ‘locking’ orders for more than one turn. Plans often involve leaving a marine to keep watch over a corridor with suppression fire (an option only available to units who haven’t moved,) and having to select a static stance and then set up the fire mode every single turn can get a bit laborious. It’s also seems a little hard to keep track of simple things like which of your soldiers has used up his grenades (without clicking on each one and checking.)

A couple of bugs reared their heads too. The final mission of the campaign decided I’d won before I’d actually done so (granted, I was probably going to win in another turn or two, but I don’t think the game necessarily knew that,) and an earlier mission did much the same thing; allowing me to move on to the next stage, even though I’d actually lost. I was playing pre-release, but at the time of writing Legions of Steel hasn’t received a patch so I assume those bugs are still present.

Once the six hour or so (depending on how amazing/terrible you are) single player campaigns have been conquered, you’re left with a collection of skirmish maps to play around on. Some of these repeat campaign missions, but most are new. On these it’s possible to have a single player match as the machines and make use of some of their unique units, like the powerful Arch Fiend. You can also opt whether to use the ‘Electronic Warfare’ fog of war system or not. 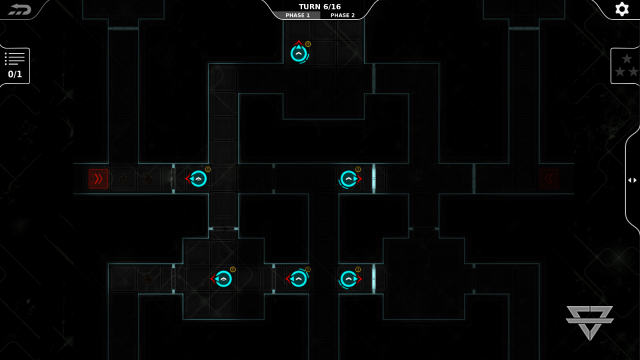 If the map gets too busy, there’s a sleek tactical overview mode to look at.

Any further replay value is likely to come from Legions of Steel’s multiplayer options, which may not yet be fully finalised. Present right now are a local ‘hotseat’ option, and Slitherine’s usual PBME+ (Play By Email) server system. This isn’t purely email based (despite the name.) Think of it like Frozen Synapse’s asynchronous system, where you’ll be told in-game if somebody has taken a new turn in the game you’re involved in.

The developers are “looking into” whether the multiplayer system can be expanded beyond this asynchronous approach, and also discuss a  tournament system in the same thread. Since Legions of Steel’s matches are relatively swift (around 15-40 minutes,) a more straightforward ‘single session’ multiplayer option might suit it pretty well.

Regardless of how popular the multiplayer ends up (something that’s always foolhardy to predict,) the single player campaign and skirmishes alone are a solid conversion of a robust set of board game rules. The presentation is largely no-frills, but the UI (a few minor issues aside) is clear, and there’s some decent Vangelis-like sci-fi ambience accompanying all your actions. As someone who’s played his fair share of Space Hulk and Space Crusade, Legions of Steel offers a comparable and worthwhile take on the eternal burly-marines-vs-aliens tactical conflict.

By Blake Grundman18 hours ago
Reviews