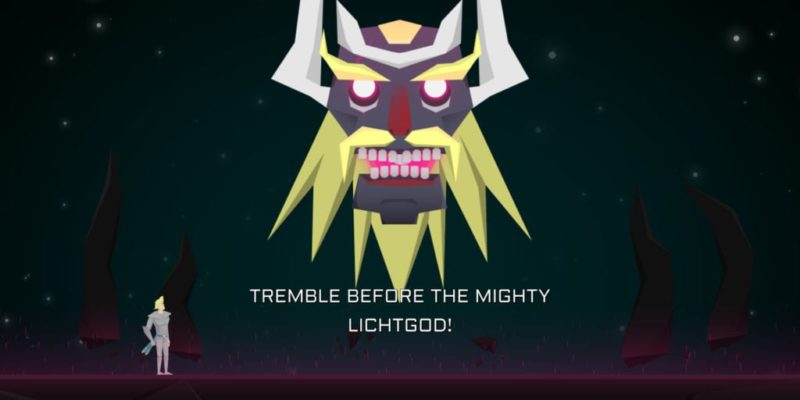 Lichtspeer is the stupidest bloody game I’ve played in a long time, and I mean that as a compliment. It’s the classic tale of ancient Germanic future, where the gods get bored and give a random warrior a spear made out of Licht so that they can fight off hordes of hipster ice giants and penguins and zombies. You know, just like you learned in school in your ancient future class.

It’s deceptively simple. Barring some special abilities, your entire job is to hold down the left mouse button to charge up a spear (er, Lichtspeer) throw, aim its trajectory with the mouse, and release to hurl. If an enemy reaches you, you’re dead. If you succeed in doing this through five separate screens on the level, you get to go to the next level. That’s… that’s basically the entire game.

Also, don’t miss repeatedly, or the gods get angry and appear and shout NEIN at you, and you can’t throw a Lichtspeer for a few seconds. That is really bad. 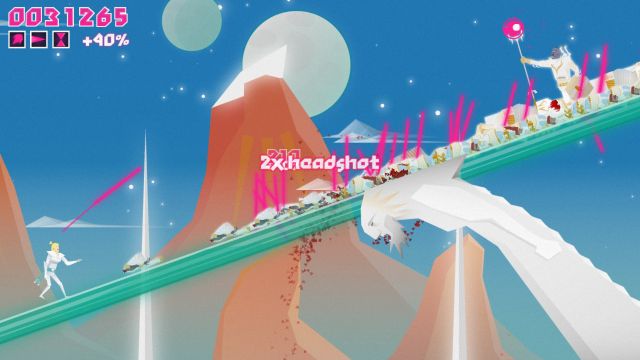 Look, you try getting a screenshot of this mid-game. It’s hard.

Success is rewarded with LSD (no, it definitely stands for Licht Standard Denomination) which can be used to purchase or upgrade a variety of powers. Maybe you’ll opt for the Trispeer, letting you split your Lichtspeer into three in mid-air. Or perhaps the explosive Lichthammer? Or maybe a smart bomb that murders everything on screen, but has such a long cooldown you’ll be lucky if you can use it more than once a level? You can take three into each level with you, and all have their own particular quirks and uses.

It’s all wonderfully silly. Every boss is prefixed with the word “das.” Random German words are sprinkled throughout. Enemies, as noted, are things like ice giants wearing ironically retro sunglasses. But beneath that joyful exterior lurks the beating heart of a complete, stone-cold bastard. 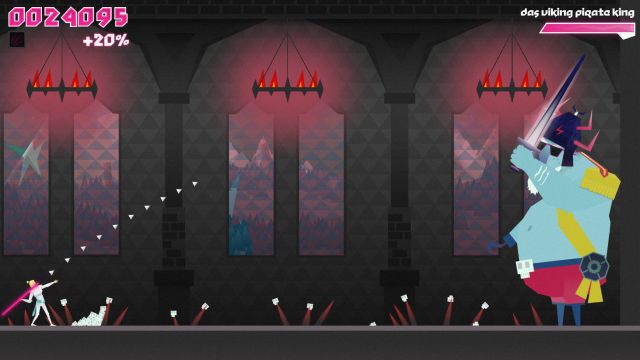 Das Viking Pirate King, for instance, who is a really simple starter boss. They get worse. Much worse.

Lichtspeer is hard. Really, really hard, and it only gets harder as it goes on. Enemies are relentless, and it’s not long before you’ve got about a billion things to juggle at once. There’s the inevitable slow march of the zombies. There are enemies with armour, who need to be hit directly in the head. There’s some asshole at range lobbing magic bolts at you, and a penguin keeps moving towards a harpoon gun, and you need to keep hurling Speers to shut down a giant laser that activates every 10 seconds and starts blazing towards you. Some stages are on an angle, or split across multiple floors. I’m not even going to talk about the bullshit Lichtspeer throws at you later, because it would inevitably trigger some sort of stress disorder.

But it’s also a game that heavily rewards skill and experience. At the beginning, the first couple of levels feel like they’re about all you can handle; by the end, I was able to do the first few levels pretty much perfectly on (the aptly named) Rage Quit difficulty. 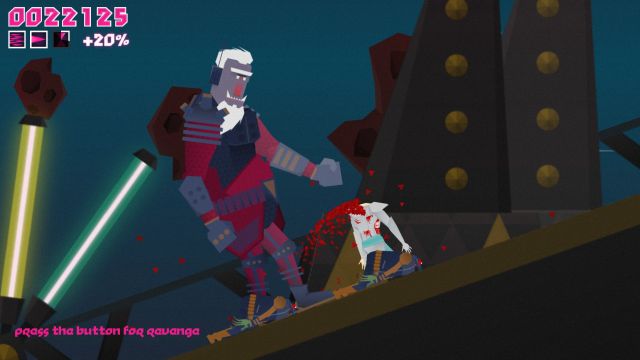 You get very, very good at working out what needs to die first, or dealing with sudden and unexpected threats. You don’t have to think too hard about most trajectories (which is good, because you do not have time). You respond without thought, lobbing speers with accuracy that will probably surprise you considering the small-ish moving targets you’re up against.

Even when it does get stupendously difficult, Lichtspeer is rarely frustrating thanks to fast respawns, and each of the level’s sub-stages having their own checkpoint. (Except on Rage Quit difficulty, where you’re back to the start of the level again, but fuck Rage Quit difficulty.) And good grief, but the sense of satisfaction at clearing a particularly difficult stage and watching your warrior stroll across the battlefield littered with the corpses of your foes is palpable. 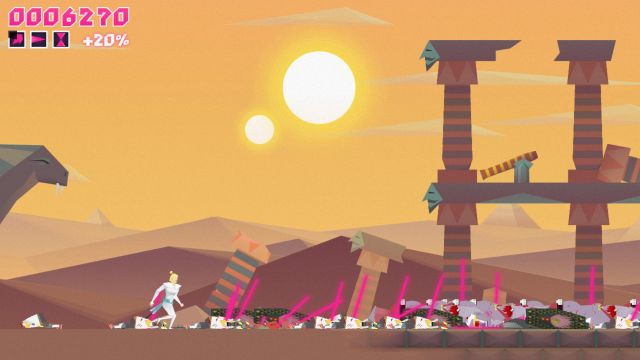 I was going to try to get a screenshot of the fish, but the fish are just the worst. Instead, have a shot of me striding over the corpses of my foes like the staggering badass I am.

In case it’s not entirely clear, I adore Lichtspeer. It’s a simple arcade game that does its one mechanic – throw speers that are affected by strength, distance, and gravity at masses of encroaching enemies – pretty much perfectly. Fast respawns mean the high difficulty usually feels fair, and even when it does inflict some sort of complete bullshit on you, there are normally little tricks you can employ to help you out. Or you just try and try and try again, and get better each time. Getting good is tremendously satisfying, and so too is speering an armoured, shielded enemy through the top of his head and watching his body ragdoll around for a moment.

There’s something very Hotline Miami about Lichtspeer. Both games have simple mechanics with a high skill cap; both games let you chain those mechanics together to achieve runs that look and feel impressive (and give you an even more impressive score); both games are incredibly difficult, but incredibly well-balanced, and incredibly satisfying because of it. Where Hotline Miami used grime and brutality, Lichtspeer uses silliness and ragdoll physics. Both games will make you grind your teeth as you click, once again, to have just one more go.

Lichtspeer is really, really good. If you’re not afraid of a challenge and aren’t put off by an absurd sense of humour, you should gird your loins, grab your speer, and get ready to take on the ancient future.