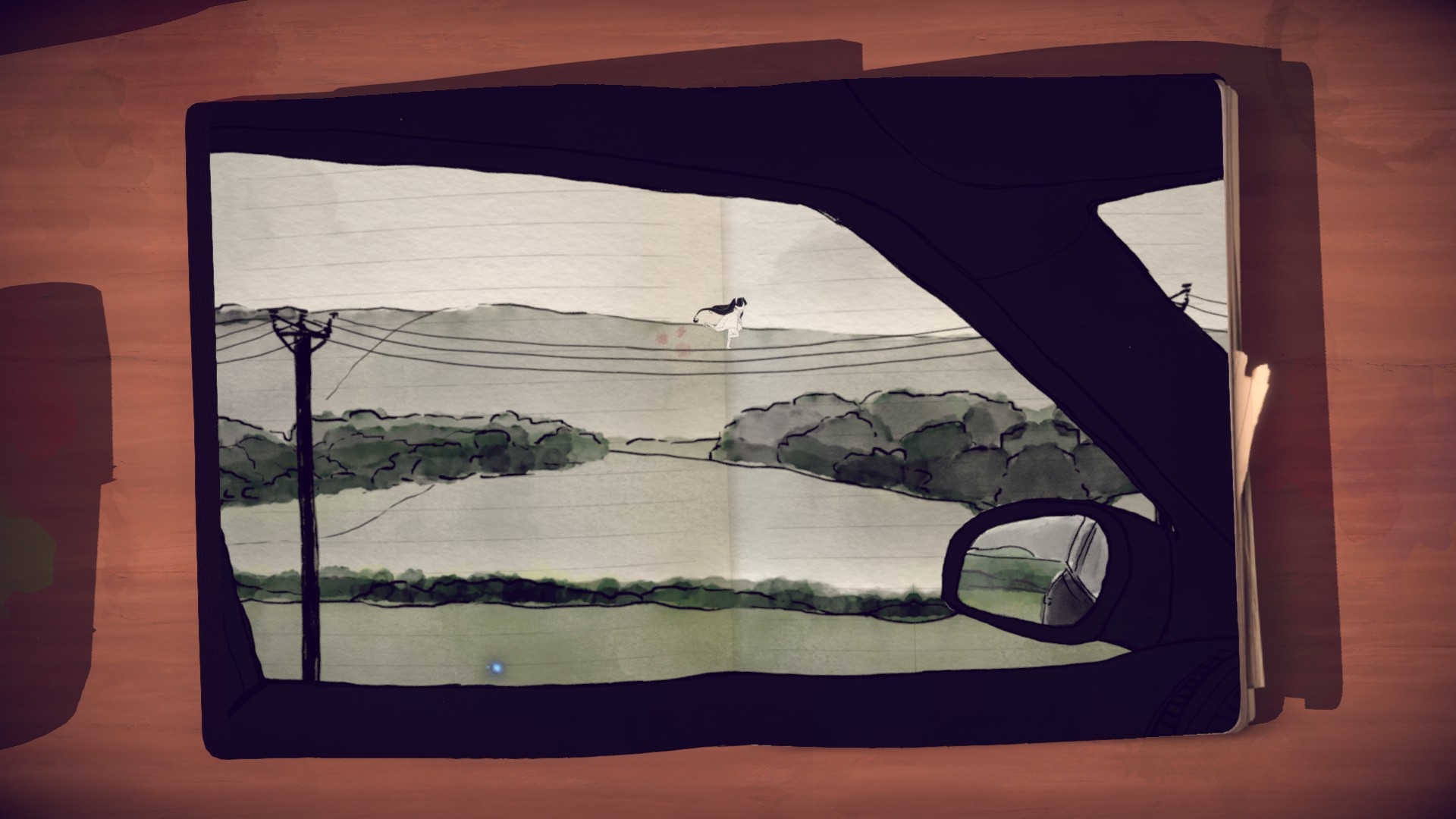 The writing process is different across a wide spectrum of people. But everyone has to start somewhere. Most of us try our hand at it during our youth. As it goes with beginners, they don’t tend to start well. Lost Words: Beyond the Page focuses on those initial speedbumps, but it’s at its best while focusing on raw, relatable emotion. It’s a short, narrative experience that left me greatly affected at times, and a bit bored at others, as it fails to have its two halves reconcile into the balance it needed.

Lost Words begins, as childhood scribblings often do, with a notebook. Izzy has received it from her grandmother, who she exclusively refers to as Gran. The two of them have the closest of bonds, and you almost certainly already know what this story is really about. Even though I knew what was coming, Izzy’s realistic, believable emotions and behavior made the game persistently enthralling. Around half of the game focuses specifically on this narrative thread, during which it reaches its strongest points. The writing is of exceptional quality, and I couldn’t help but relate to the words Izzy puts on the journal’s pages.

But that’s only half of what Lost Words offers. Izzy starts off wanting to write a story. The game jumps back and forth from focusing on her journal to showing us her story itself. Great care was taken to make Izzy’s story actually feel like it was created by a child writing their first piece of fiction. While that makes the overall package more believable, it’s much harder to care about its contents compared to the journal sections. Izzy toys with events and characters. At one point she gets stuck; her story loses its focus. That’s highly normal for a writer, but it’s not as compelling for the audience, which led to me caring less for this part of the game. 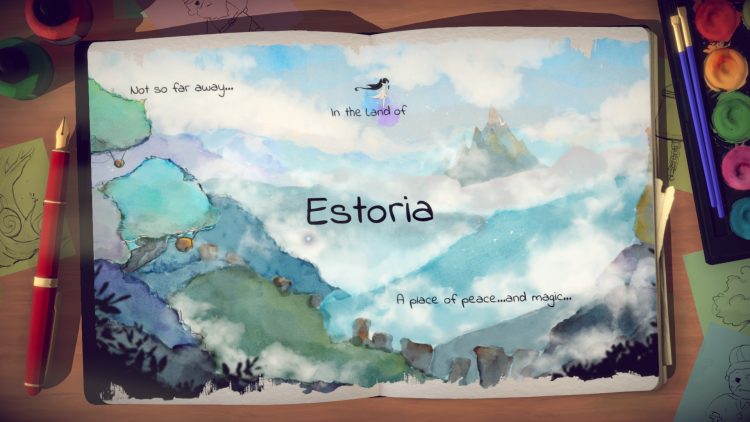 Jumping from page to page

Each of Lost Words‘ halves has a different presentation. The journal entries quite literally take place on the pages of Izzy’s notebook. She adds her thoughts in pen, in addition to notes in blue, along with a variety of colorful illustrations. During these sections, you control a black-and-white character that represents Izzy as she platforms on top of words. Certain words are written in special colors, which means that Izzy is supposed to walk on them to move things forward. The goal on each page is to make Izzy reach the end of her thoughts, at which point a small hole in the paper will appear that allows her to make it to the next page.

I greatly enjoyed these sections and looked forward to returning to them. They’re fully voiced and packed with character. The idea itself is also quite novel. But after a bit of time passes, an illustration of Izzy’s story will appear and she’ll jump through. Here, you play through the story itself. You’re given a few choices in regard to your avatar before jumping into the first sequence. There are three names available, plus you can choose the character’s dress color, along with the type of stone she has on her pendant. This was a cute decision that gives Lost Words more personal flavor than it would have had otherwise.

While the journal sections all take place on notebook pages, the story sections are 2.5D. I honestly don’t care much for the art style that was used for the latter, as things look a bit cheap and barren. It doesn’t help that the story itself is built out of tired fantasy tropes. When playing these sections, I mostly just wanted to get them over with so that I could see the next journal segment. No section in Lost Words is particularly lengthy, though, and there isn’t much exploration to be done, save for the 120 fireflies that can be collected in the story levels. 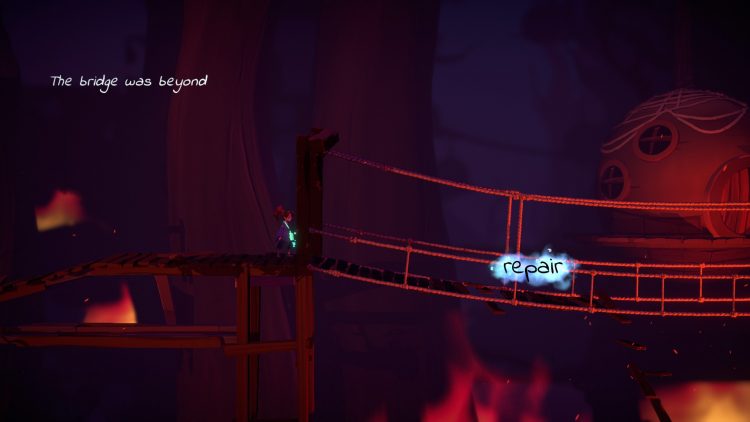 The pen is mightier

The gameplay in Lost Words is fairly simple. Both Izzy and her character can walk and jump. The jump grants a large amount of air and feels at home in the journal sections. In the story ones, it feels floaty and off to me. Movement, in general, feels weightless and a bit sketchy. Your character can also crawl and push blocks. The most unique factor here, though, is that words themselves can be manipulated. In the journal sections, words can be moved around on the page to create platforms or finish sentences.

This is even more literal in the story sections, as the character has a book with words of power. These influence objects and areas onscreen in tangible ways. For instance, the first word we’re given is “rise.” Dragging it onto certain platforms or locations will grant the means to move upward. Similarly, there’s “repair,” which can mend statues and bridges that have broken. Much of Lost Words tasks you with using these words to progress through the areas. It’s a cute, effective way of handling progression, and words are often added or removed as the situation calls for.

Lost Words is a fairly short game, clocking in at about four hours. Players can return to chapters to hunt for any fireflies they missed, but there isn’t much in the way of replay value. I found the game’s overarching story to be charming and compelling, but it does lose some steam due to how underwhelming the climax of Izzy’s creative endeavor is. The journal sections are worth the price of entry alone, as they’re imaginative, clever, and often gorgeous. Going from stark black on white to pages covered with eye-popping color never got old. 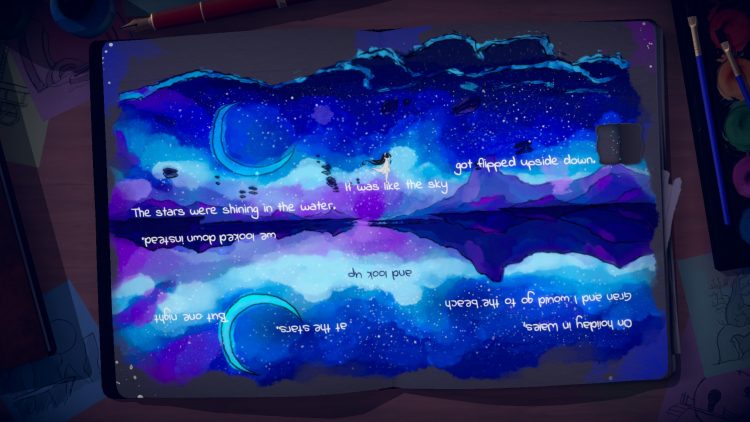 Overall, I enjoyed the game, but I definitely find the experience to be lopsided. Izzy’s story simply can’t hope to compete with her journal entries. Still, I understand why it’s the way it is, even if I feel like certain elements could have been handled better. Anyone interested in a narrative game based around the combined natures of loss and literary inspiration will get the most out of Lost Words: Beyond the Page.

Lost Words: Beyond the Page

Uneven, yet unique and compelling, Lost Words has some truly effective narrative and design elements. It's let down a bit by overreliance on the protagonist's less-than-interesting literary attempts, but it's a worth playing for fans of narrative games.