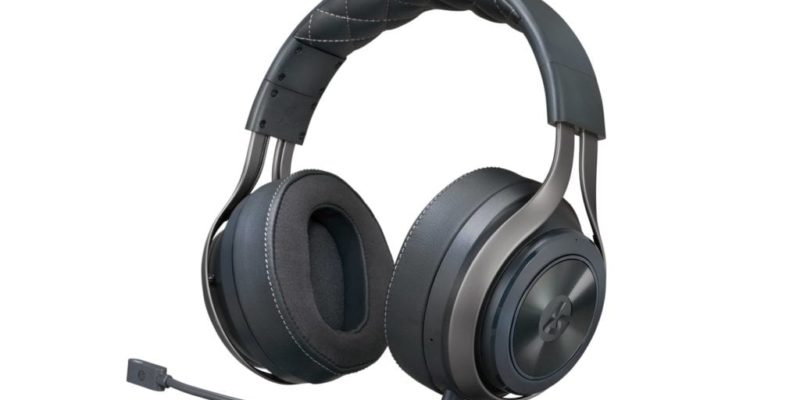 The LucidSound LS41 surround sound gaming headset is unlike most gaming headsets I’ve used. From the moment I pulled it out of the box, alongside a small collection of wires (which was kind of weird for a wireless headset), I knew I was in for something different. I just wasn’t prepared for how amazing and strangely complicated different it could be.

Inside the box is the LS41 headset, the wireless USB dongle, a detachable boom mic, a micro USB charging cable, an optical audio cable, a 3.5mm audio cable, a small cover for the microphone plug (which is almost certain to be lost someday), and a large soft-interior pouch to hold it all.

Sporting a metal headband and leather-covered padding, the LS41 weighs about 12.5 oz (355 g), which is heavier than I’m used to. Holding it, there can be little doubt that the LS41 is a premium headset. But surprisingly, I didn’t notice the weight once I put it on. 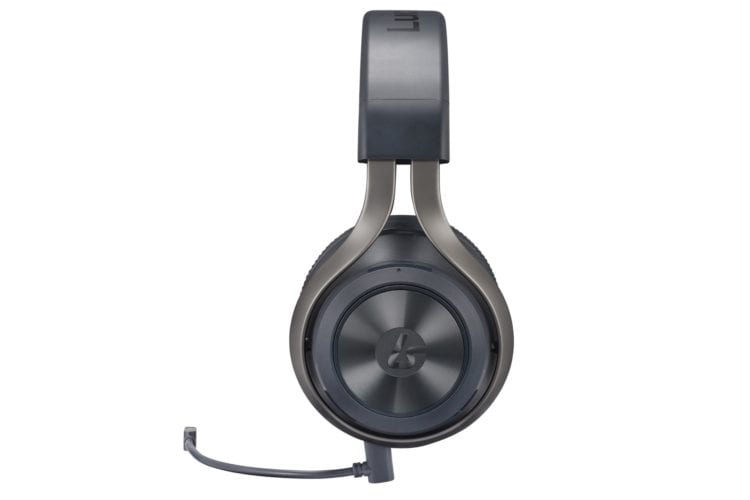 LucidSound has low-profile volume knobs and buttons designed onto the ear cups.

The large ear cups feature 50mm drivers, can be rotated 90 degrees, and there’s plenty of room between them, allowing the headset to rest comfortably around my neck. The ear cups also have gel-cooled memory foam padding, which kept them comfortable even after hours of marathon gaming. Volume knobs for both the speakers and the microphone are integrated into the outer rim of the ear cups while their centers are large buttons for muting the mic or turning mic monitoring (so you can hear how your voice sounds) on or off.

This 7.1 surround sound headset is also nearly universal, compatible with PCs, Xbox, PlayStation, and mobile devices – which explains all the cables. However, it has to be plugged into mobile devices using the 3.5mm cable and can only be used in powered down stereo mode. I consider that kind of cheating, but it technically works.

Additionally, the LS41 includes a built-in microphone that works without the detachable boom mic. Plugging in the accessory puts the mic in front of your mouth for better communication while adding an LED light to indicate when it’s muted. Turning on microphone monitoring, whether the boom mic is on or not, also happens to be a quick way to turn this closed back headset into a virtual open back for better awareness of what’s going on around the room.

LucidSound’s headset also has several built-in EQ modes that can be changed at the touch of a button. They include the default gaming surround sound and a boosted surround sound mode that enhances high and low frequencies for movies and music. Then there are three stereo modes: standard stereo, Super Stereo Wide, and Super Stereo Front. Stereo Wide expands the stereo channels so that it sounds like you’re in a room with speakers spread apart while Stereo Front makes everything sound like they’re coming from in front of you.

Universally compatible, sturdy, and wireless, the LucidSound LS41 has all the versatility one could want from a premium gaming headset — except getting it to work on the PC turned out to be a huge hassle.

Technically, setup can be as simple as plugging in the USB dongle and switching the headset on to automatically sync it, which gets you plain stereo sound. You could activate Windows Sonic or Dolby Atmos for virtual surround sound, which works well, but then there would be little sense in spending $200 on a 7.1 surround sound headset. Using the dongle alone also has the strange effect of switching the left and right volume knobs with each other.

You’ll have to do a little extra work to get better-sounding audio on PCs, but setting it up takes some doing and it’s not exactly intuitive. 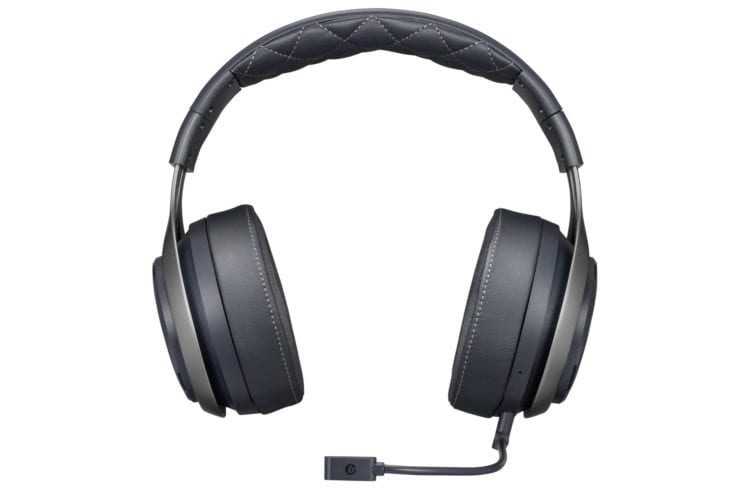 LucidSound uses a system I’ve never seen on any other gaming headset. After plugging the wireless dongle into a USB port, I had to plug the optical cable into my sound card, with the other end plugging into the side of the dongle.

Then I had to go into sound settings in Windows to set my optical audio output (not LucidSound) as my primary device, with the LucidSound transmitter set to be the default communications device. Apparently, the sound card delivers the main audio through the optical output while the dongle operates the discrete surround sound.

Overall, it’s more work than a gaming headset should reasonably need, and LucidSound is quite presumptuous about its installation. The full 7.1 surround sound only works if your sound card software supports Dolby Digital Live through the optical port, which mine does not. So, the surround sound capabilities are wasted unless you have the right sound card. At the very least, getting true 7.1 surround sound from this headset would require more tinkering, hacks, and/or upgrades than it’s worth.

As a side note, the dongle gets noticeably hot, even when it’s plugged in but not in use. Although that hasn’t seemed to impact the wireless signal or sound quality yet, it’s still a worrisome issue.

With all that in mind, there are two things that I can say for certain about the LucidSound LS41: (1) The setup is a little ugly. The black dongle protruded from the front of my PC with a bright white LED light stripe on it and a thin optical cable leading from it to the back of my desktop. (2) Even without full 7.1 surround sound, these headphones sound amazing.

The Super Wide audio by itself was enough to bring a tremendous feeling of richness to everything I listened to, which made the awful setup worthwhile.

For comparison, I tested the LS41 using my PlayStation 4. It also uses the optical/USB setup, but getting it ready was a breeze. I was up and running in under five minutes, playing games and watching movies using the surround sound EQ modes. As expected, everything sounded fantastic. So, even though the LS41 technically works on the PC, it’s clear that it was primarily developed with the PlayStation 4 in mind. This is further demonstrated by how the dongle’s glowing white LED stripe matches the one on the console. 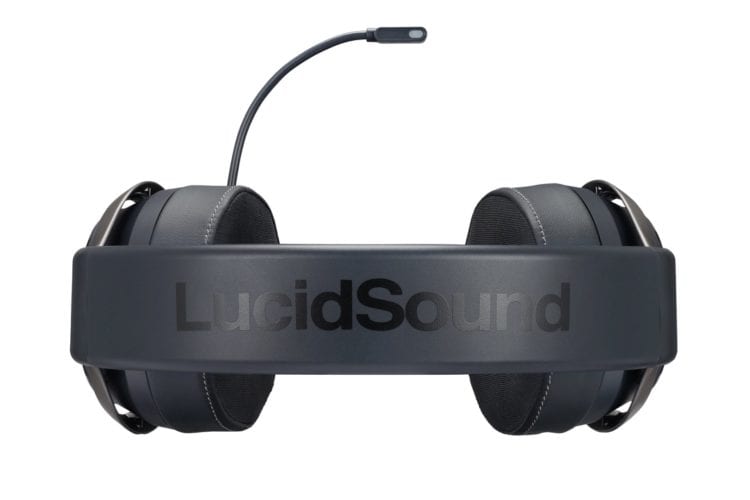 Although the effort of setting up the LucidSound LS41 is a pain, it’s hard to overstate how fantastic things sound on these headphones, even without the full 7.1 experience. In some cases, it was almost like I was hearing some of these songs and movies for the first time.

In most cases, the Super Wide setting was enough to compensate for the lack of true 7.1 surround sound. Music in games such as Tetris Effect is elevated. Playing through Control, I was able to make out every creepy groan and nonstop chanting as I made my way through the giant building full of interdimensional invaders.

Other benefits include a battery lasts about 20 hours and there’s some outrageous range. It’s rated for 30 feet, and I was able to get a clear signal from over 20 feet away, even with a wall in the way. The boom mic is also nice and clear. My teammates had no trouble hearing me.

So, the LS41 certainly requires a lot of thought before considering. It’s worth having if you intend to use it primarily with the PlayStation 4, but its value drops off with other platforms. That’s a significant problem, given the relatively high cost of the headset. Gaming notebook users are overlooked twice over, since most systems don’t have optical out ports.

I was deeply impressed by the LucidSound LS41’s performance – so much so that it almost became my new favorite headset – but it’s tough to recommend it to PC gamers given its setup requirements and $200 retail price. There are plenty of other 7.1 surround sound wireless gaming headsets out there that are comparably priced and don’t require an absurd setup or conditions regarding PC compatibility.

The LucidSound LS41 7.1 surround sound wireless gaming headset delivers amazing sound, almost becoming my new favorite headset, but getting it to work completely with PCs is more hassle than it's worth.

By Kevin Carignan2 days ago
Hardware