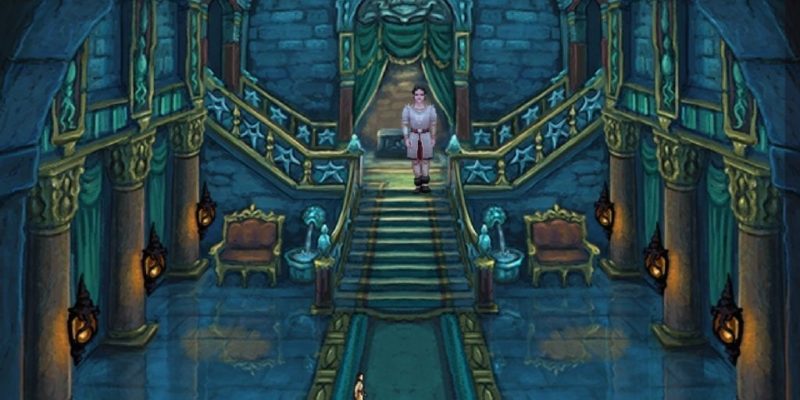 Mage’s Initiation has two selling points that should immediately bring it to the attention of old-school adventure fans. For one thing, it’s an attempt to recreate the joys of Quest for Glory, Sierra’s old RPG/point-and-click hybrid. For another, it’s by Himalaya Studios. You might know them better as the commercial side of AGD Interactive, a team which remade (with great success, and for free) the first three King’s Quest games and the second Quest for Glory game. 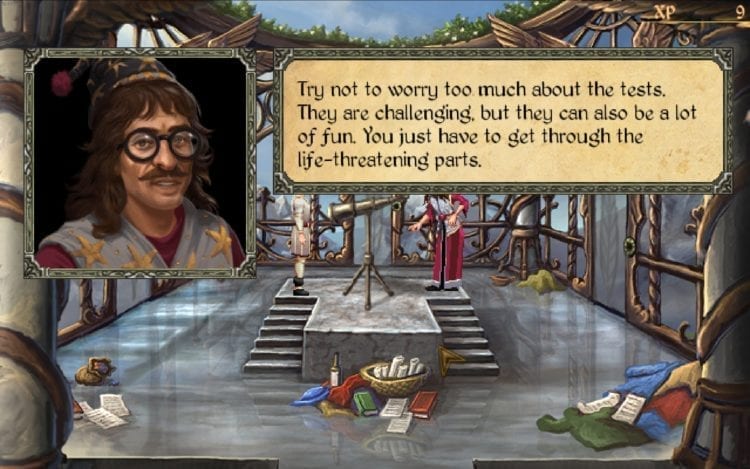 As with Quest for Glory, Mage’s Initiation manages to push some levity into its adventuring drama.

Mage’s Initiation takes its basic ideas and mechanics from Quest for Glory. You play the role of D’arc, a mage apprentice who has completed his training and… well, needs to be initiated. As it turns out, a mage’s initiation involves taking on three ludicrously difficult tasks set by the masters, then completing them within one day. In D’arc’s case: getting a lock of hair from an imprisoned but powerful priestess, stealing an egg from the ferocious and well-guarded griffons, and getting a horn from the possibly extinct Trinicorn. Somewhat inevitably, these tasks wind up having far-reaching consequences, and dark things are afoot in both the kingdom and the mage’s tower itself.

Also inevitably, this means a lot of pointing and clicking, plus solving a few obtuse puzzles. It also involves combat, leveling up, and… well, choice. Not the sort of choice you’d think of if you’ve played Telltale stuff, though.

At the beginning of the game you choose an element – Fire, Earth, Air, or Water – and this dictates the magic you receive throughout the game. As clever spell-casting is one of your primary ways of solving puzzles, this essentially offers four “routes” through the game. These routes are still pretty linear, unfortunately; you must complete each task in order, and certain segments and puzzles are locked off until you’ve done previous bits. But hey: it’s a point-and-click adventure.

A Route To Success 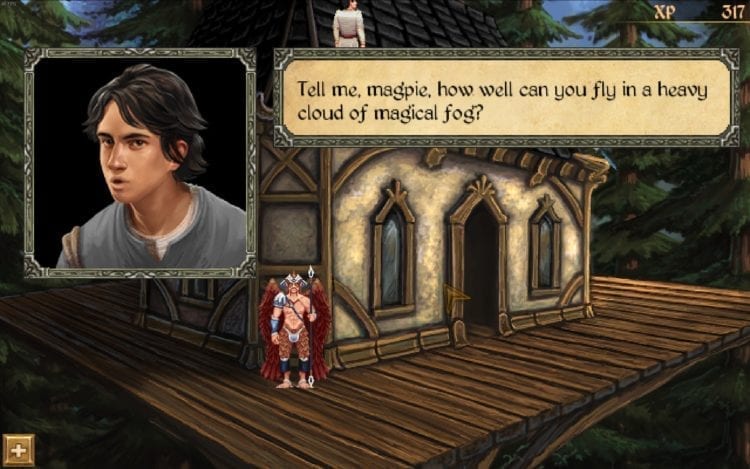 There are some nice minor differentiations between classes. Only air mages can talk to birds like magpies, for instance.

These routes aren’t hugely differentiated, mind, barring an element-specific sidequest in the mid-game. For the first two tasks, most puzzles are inventory-based, with some simple spell-casting every now and then. It’s around the third task – when you have a full arsenal of spells – that you start to solve more problems through magic. So, fire mages can melt the lock on a chest, while air mages will need to cast Retrieve to stealthily acquire the key.

Most puzzles are relatively simple (the aforementioned chest opening, for instance, shouldn’t strain any brain cells). A few particularly satisfying ones require some clever thinking, and there are only a couple instances of pixel-hunting that I can think of. At least one of those happens at a point where players are locked into a grand total of two rooms, so even that isn’t too offensive. Still, there’ll probably be at least one occasion when you’ll know what you need, just not where to get it.

Also, while Mage’s Initiation takes many cues from old Sierra titles, it also avoids some of their massive pitfalls. You won’t soft-lock on the final puzzle because you didn’t pick up a stick on the first screen. Random or sudden deaths are also pretty rare. This actually disappointed me slightly, if only because dying in the most ridiculous ways always amused me in Sierra games, but non-combat deaths do pop up a bit later. 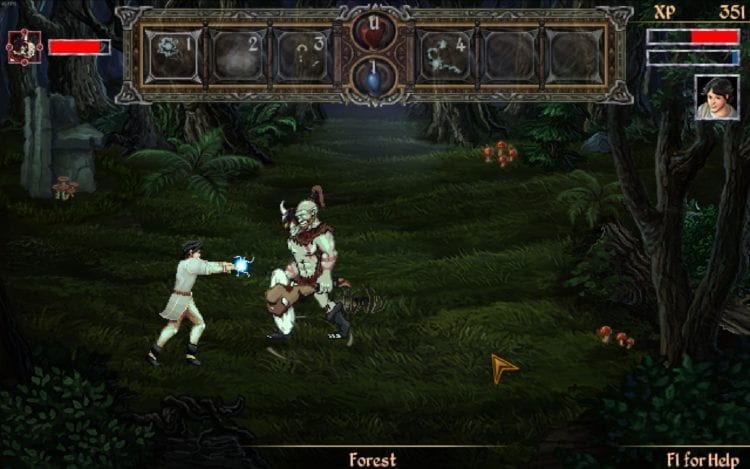 Even against this terrifying beast, my tactic of “run in circles and hit him with basic magic” worked well.

Then there’s the combat. This takes place on the same screen as your adventuring, so no cutting away to a separate fight screen. Other than your arsenal of spells – all of which have different combat applications – you can move around manually by clicking or using the keyboard, and you can chug health or mana potions when needed. Spells are your only way to fight. While your basic attack spell is always available, the others require mana… which only regenerates up to a fairly low point.

Combat is, honestly, one of the weakest parts of Mage’s Initiation. Against melee enemies, the usual tactic is to run around the screen in circles so that they never reach you, occasionally firing off spells. Against ranged enemies or bosses you may need to think a little more. As an air mage, this usually meant casting Fog to prevent them from attacking me, then wailing on them with basic attack spells. You have other possibilities available (confusion spells, disables, and the like), but I rarely needed them.

For better or worse, combat is also rarely needed. You get experience from solving puzzles, not from combat. You can get money and equipment from defeated foes. However, merchants will only accept a limited number of items. Equipment doesn’t make a huge difference, either, because of the basic combat tactics. So, it’s often acceptable to just run away – even if this does mean you might get lost in a forest. And yes, I dragged out grid paper to map one area out and started making notes of unsolved puzzles and hints on paper. This, at least, pleased me. 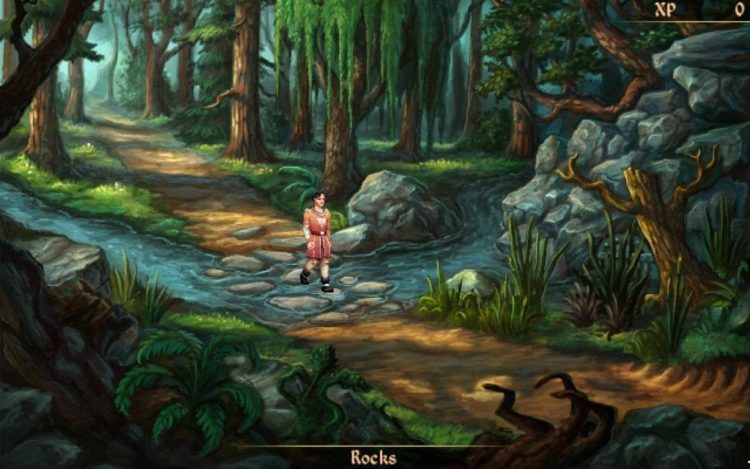 The backgrounds are uniformly beautiful. No snark or sarcasm here: they are stunning.

Still, this does at least mean grinding is almost completely unnecessary, barring the few points when you need to buy puzzle-related items – and if you haven’t completely avoided combat, you shouldn’t have to grind then either. Thankfully, grinding your skills (as with Quest for Glory‘s “attempt to climb a tree a few hundred times to raise Climbing”) is also unnecessary. The flipside, of course, is that this gives it more of a focus on traditional puzzles than on Quest for Glory‘s skill checks, which often allowed bypassing puzzles and extra possible solutions.

Presentation-wise, at least, I can’t find much to fault. The graphics are gorgeous, and the ability to choose between three different UIs – from verb coin to drop-down toolbar – is inspired. Voice work is almost uniformly good across the board, too.

Almost. The prime exception, unfortunately, is D’arc. It’s slightly charming that he sounds like… well, an old-school Sierra protagonist. Slightly. But the weird cadence and reading of his lines quickly becomes distracting when compared to the more standard voice work of the other characters. D’arc is a naïve individual who firmly believes in mage superiority (somewhat understandably, considering his ten years in the tower and the general state of the world). And as such, he’s got his fair share of unlikeable moments. He’s not the most pleasant character to control, and certainly not the most pleasant companion for your exploration of a fantasy world. 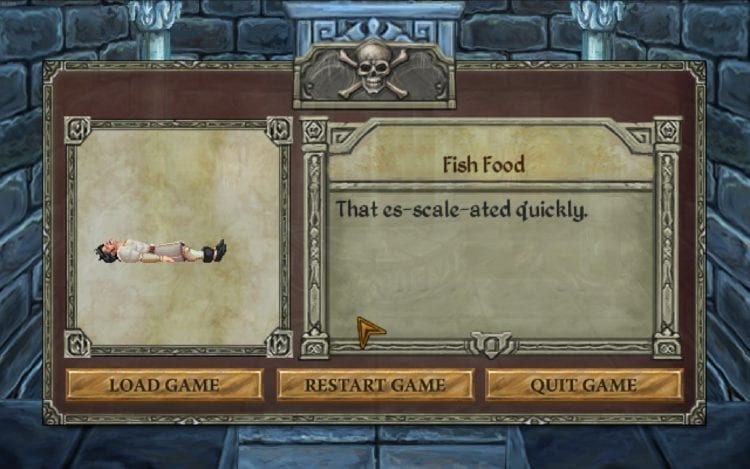 Death results in terrible puns and sarcastic advice. That is at least 50% of the reason why I seek as many of them out as possible.

All of this leaves me a bit torn on Mage’s Initiation. At its best (especially early on, when you’re first seeing the world), it’s like discovering a lost Sierra title from the VGA generation. At it’s worst, it’s a bit of an uninteresting slog (also early on, before the plot gets moving properly).

Still, it’s something I’d like to see more of. Considering it offers the option to save your game completion for importing into future titles, I’m hopeful that Himalaya Studios can use this as a starting point to improve the mechanics and expand the world in more interesting directions. After all, the series it so lovingly follows did much the same.

And frankly, faults and all, it’s still better than a couple of the Quest for Glory games. Considering the low price, it’s hard not to look somewhat favorably on this completely original nostalgia trip.

Mage's Initiation: Reign Of The Elements

It's not the reigning champion of this hybrid genre, but Mage's Initiation is a promising challenger. If sequels expand on the basics shown here, this could well be a series worth watching.

Fallout 76 Patch Re-Breaks The Game, Because Of Course

Warhammer Quest 2: The End Times Review – From Mobiles To Middenheim