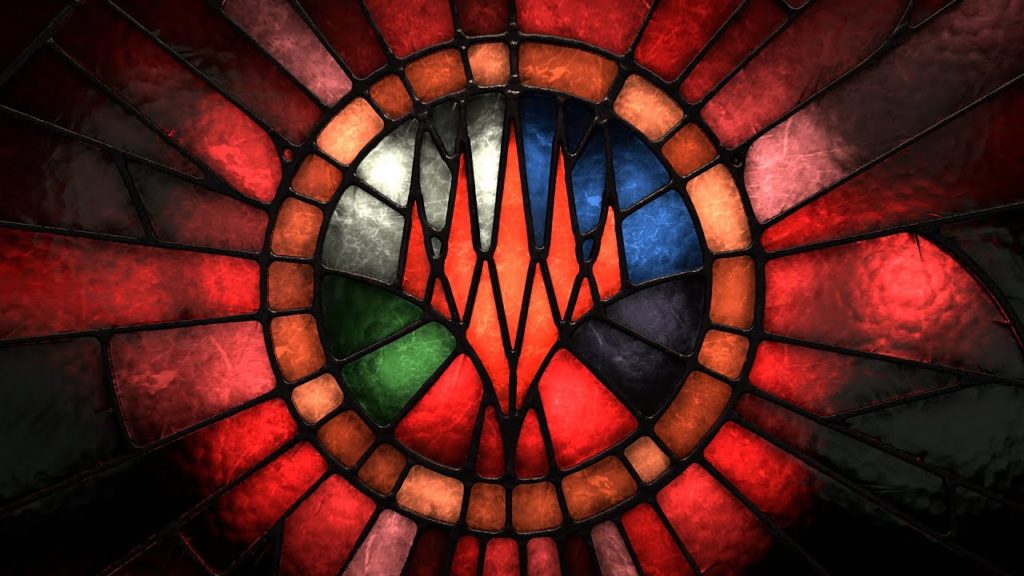 It looks like Perfect World Entertainment and Cryptic Studios are set to shake things up in the world of Magic with their latest title. In Magic: Legends, players will experience an all-new action/role-playing approach, compared to the typical card system. This, in turn, creates a Diablo-esque adventure that makes it engaging for players of all skill levels to enjoy. We recently went hands-on during PAX East 2020 with the free-to-play game to see what it had to offer.

Getting started in a new world

We had a chance to play through two different demos. After choosing a class (we decided to go with a red mana-based character, the Geomancer, that specialized in fiery attacks), we set out on our mission. This involves taking on adversaries while attempting to “cleanse” statues of evil. As expected, you’ll have to stand in one glowing spot in order to get the job done, while fending off opponents that come at you.

What’s great is that your character has an array of attacks in their arsenal. For example, there are basic attacks that are good for striking. However, since this is Magic we’re talking about, the real power lies in the spells that you can cast. This includes unleashing surprisingly powerful attacks like a lava burst that covers a good range of land. You can also throw a directed earthquake at opponents, as well as performing a leaping attack. Not only is this useful for a quick strike, but also for getting out of the way of certain danger. 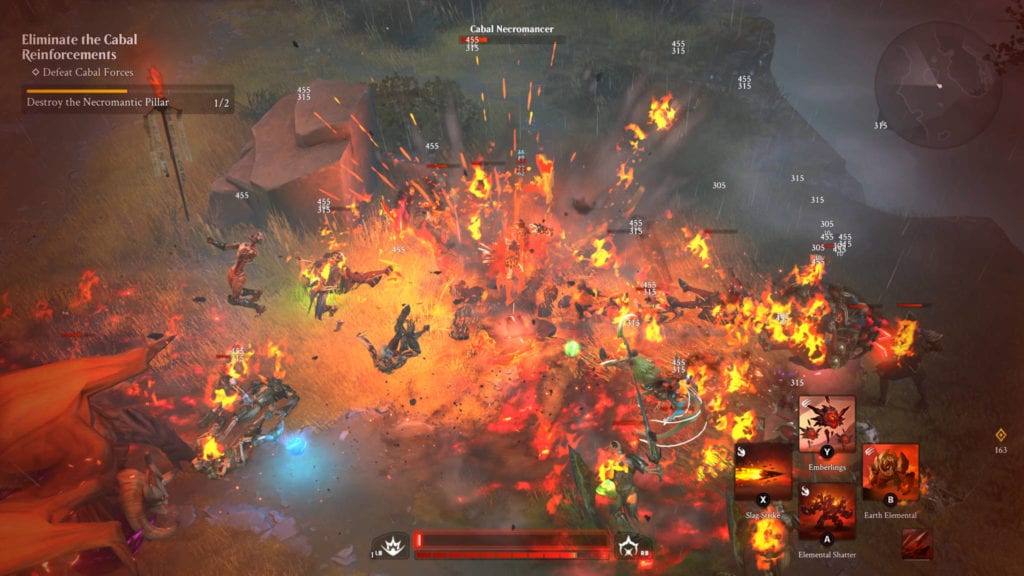 You can also summon assistants to lend you a hand. These vary with each character. For instance, the class we chose came with both smaller spider-lings as well as larger rock creatures, each capable of delivering their own dose of damage. Obviously, the bigger the better here. The more you summon, the more of an army you have taking on tougher enemies.

That led us to the second demo, in which we took control of a more specially-built brute, the Beastcaller. He’s capable of unleashing ax attacks on foes, as well as a blade that he can throw in a straight direction. This is great if you’re trying to knock down multiple enemies in a row. And you can still strike up-close, so it doesn’t leave you empty-handed.

They have their own special techniques as well, such as summoning a large, dreadlocked monster that can hit anything in its path. Of course, you can also call upon secondary assists, including a large spider that can strike with its own techniques. It’s a matter of building up the right adversaries to help out. 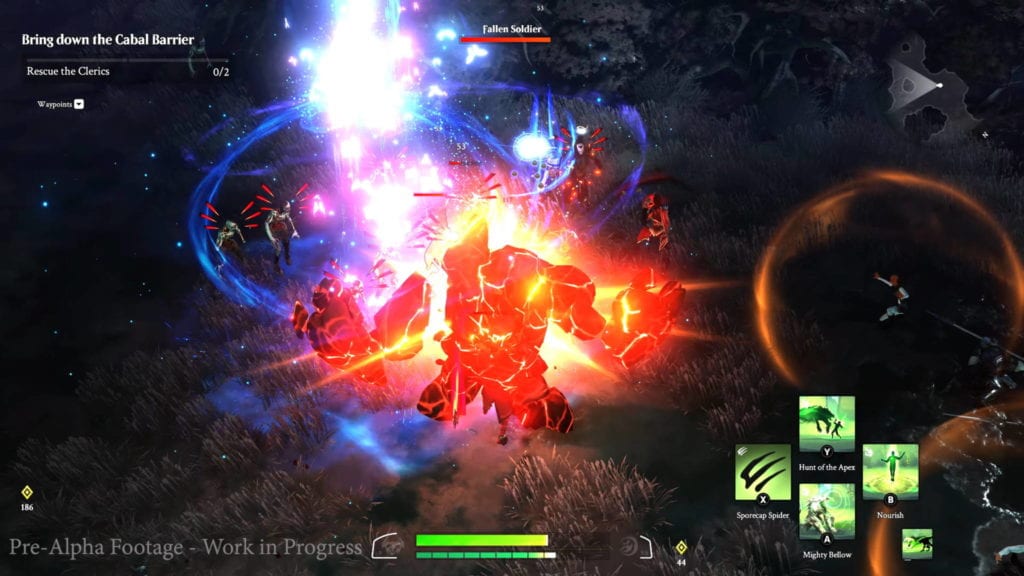 And boy did it, because at the end of this particular demo, we ended up going against a dragon. He struck in waves, starting with some ground attacks and flame breath. But then he took to the skies while a number of smaller enemies charge you. The trick is to avoid his attacks from above, including bursts that leave the ground smoldering. With enough skill, you can eventually bring him down.

Magic: Legends is all about making the most of your attacks. There’s only so much mana that you can use before it rebuilds, so you’ll want to plan accordingly. That said, you can supercharge your character every once in a while and go crazy with certain attacks, like the powerful Rampage. Choosing what works best could make all the difference between life and death. Oh, and if you see any health potions, go ahead and snag them. You will need them.

Leave the cards, take your spells

The game does give you the option to tread your own path, and also lets you invite friends to come along for the ride. The more the merrier (up to three in all), especially as enemies pile up while you take on certain tasks within the game. We only played through single player in the demo, but it left a lasting impression for what’s to come. 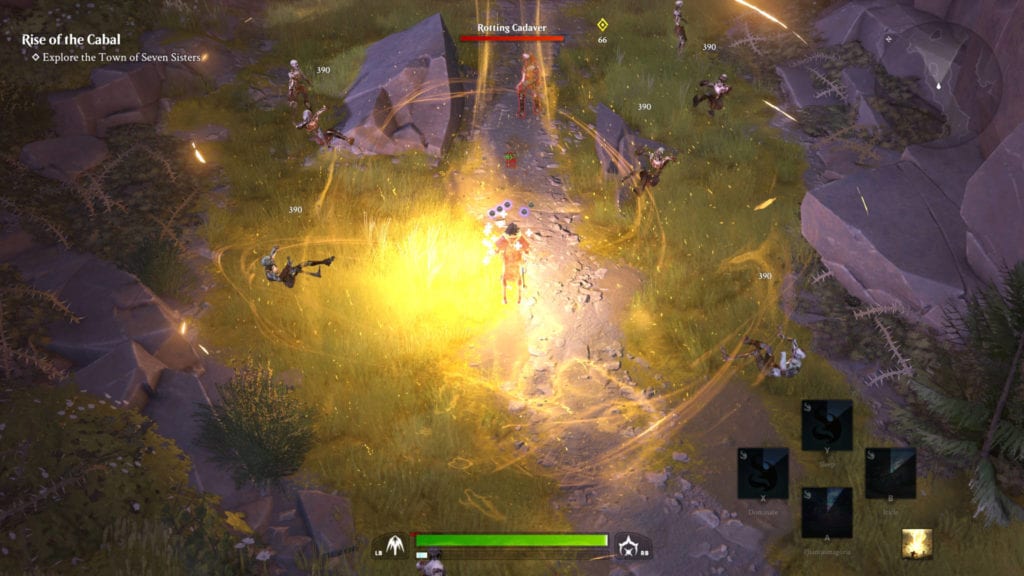 The free-to-play experience begins sometime this year, with a yet-to-come beta. We’ll have more information on when that will arrive soon enough. In the meantime, read more about the game here, check out the trailer below, and prepare for a new kind of Magic. If you’re interested in getting your hands on the game before release, there’s a link to sign up for a beta at the official page.

Stardew Valley will get more free content with version 1.5 update