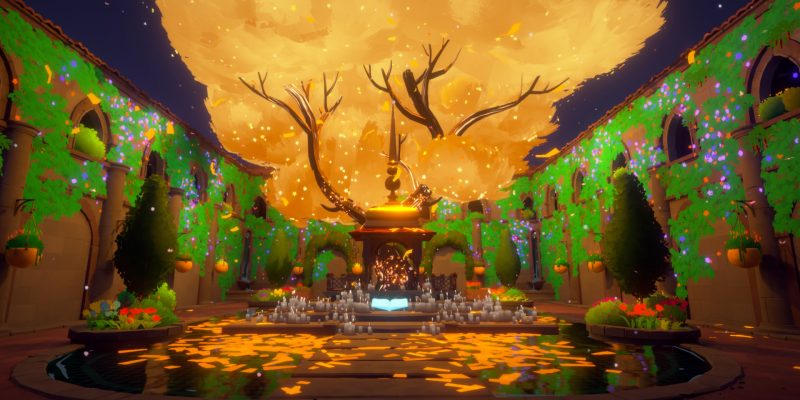 Many of us have likely felt the lurching dread that accompanies the transition from a rollercoaster honeymoon period to a relationship that simply doesn’t quite work. That sense of loss is universal, but I can’t recall any games attempting to replicate it. Maquette is a narrative-focused first-person puzzler built around manipulating objects at various sizes to find solutions. The signposting can be quite rough, and the early story sequences are a bit too saccharine. However, there’s a depth of emotion in this highly relatable tale that will stay with me far longer than some of its clunkier puzzles.

Maquette takes place from the perspective of a man named Michael. The plot begins when he finds a sketchbook he shared with his ex, Kenzie, which results in him taking a hard look at their relationship and what it meant to him. We go along for the ride as we see the romantic tides ebb and flow, and we’re right there with him to feel the all-too-familiar sting of detachment once things inevitably start to turn. I felt my eyes roll at how perfect both he and Kenzie appeared in earlier plot sections, only for the game to hit close to home once it made its goals more clear.

Michael and Kenzie are wonderfully brought to life by real-life married couple Seth Gabel and Bryce Dallas Howard. My jaw dropped when I saw her name in the credits, as some may know her from Jurassic World and Black Mirror. Understandably, performances of that caliber wouldn’t have occurred had Maquette‘s script not been of notably high quality. The writing is excellent, and the game’s themes and pacing are heartfelt. Maquette also contains the most believable argument that I’ve ever heard in a video game, to the point that I’m convinced that whoever wrote it ended up paraphrasing fights they themselves experienced with a significant other. Regardless, there’s a lot of honesty on display in the game, elevated by the script. 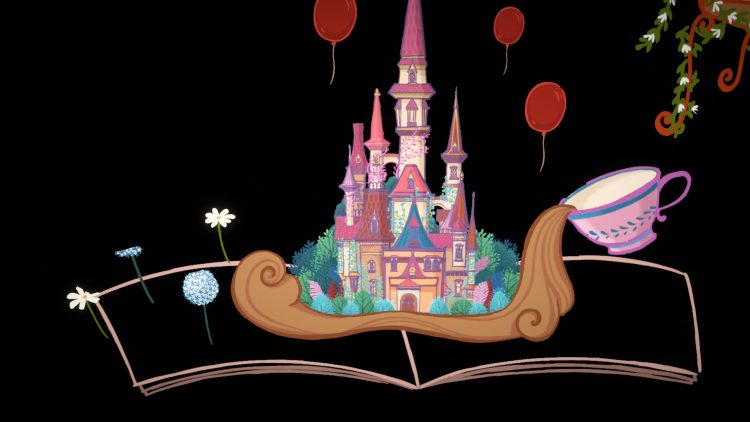 There’s no getting around that the story in Maquette is its best feature. But the game isn’t a walking simulator, even if it does have some sections that qualify as such. It’s a puzzle game that can actually be surprisingly difficult. I was given a guide in case I needed it. And boy, did I. In all likelihood, I wouldn’t have been able to figure out some of the tougher things otherwise, but I’ll get to that aspect in a bit. Much like Superliminal, this is a game about perspective, although Maquette takes the concept less literally than the aforementioned game did.

At first, everything seems normal. You go through the game’s intro and then enter a location with four areas on each side and a domed structure in the middle. You’ll need to go into each area to bear witness to memories in order to progress the story. The domed area has a miniature version of the area you find yourself in, which I thought was cute. Then I looked up. It’s not that the miniature in the dome is a little, fake version of the area. As I looked skyward, while not under the dome in the center, I noticed a much larger dome overhead. Maquette often takes place in various models of the same area.

There are spots where you can fall over the wall and find yourself teeny-tiny compared to the massive world. Maquette‘s puzzles require you to use this to your advantage. It’s breathtaking and stays impressive for the duration of the game’s runtime, in part because it doesn’t see fit to repeat itself unnecessarily. The game is broken into six chapters that are all unique from one another. They vary not just by puzzle type, but also by architecture and atmosphere. 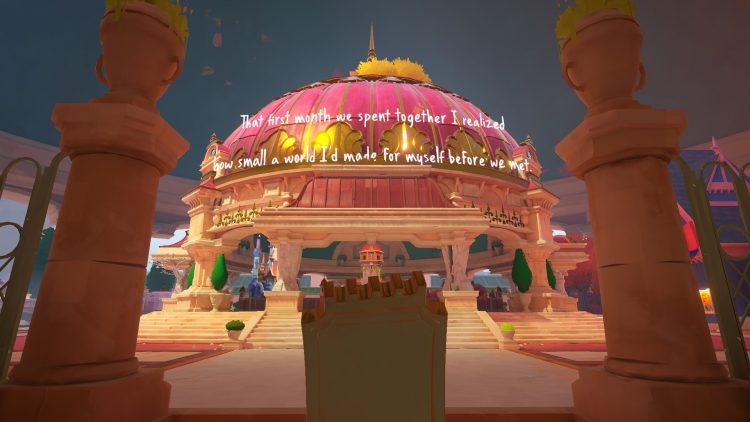 You must have fallen from the sky

In each chapter, you’ll find various interactable objects. The first of these is a giant cube sitting on the sidewalk. It’s located in the same spot in the miniature, and only you can pick that one up. Wherever you move the miniature cube, the larger one will fall out of the sky and land on top. The surroundings shake as it hits the ground. Similarly, you can use the world around you to further manipulate the sizes of these items. The third chapter is built around using a giant staircase to reach new heights. If you use the miniature version to place a medium version in the area around you, you can pick up the medium one and drop it into the miniature to make a huge one. Sometimes you’ll need a huge item in a huger layer of the world to accomplish things. It’s fiendishly clever.

While the overall concept and puzzle mechanics in Maquette may be horribly impressive, the puzzles themselves often are not. The game can be obnoxiously rigid. In one chapter, you can break boundaries freely without worry of invisible walls. In the next, you can find invisible walls and invisible ceilings that are meant to keep you on task. It’s often difficult to know what is and isn’t walled off, as this aspect is inconsistent. This came to a head in one of the game’s puzzle sections. I needed to free a gem that was trapped in a house with no way out.

However, I simply couldn’t figure out how to do so. It turns out I needed to shrink it and push it through a tiny opening. But I had assumed the tiny openings were just for show, as there was no indication that it simply wasn’t another invisible wall. And that wasn’t the only time I had a problem. Maquette‘s signposting often isn’t where it needs to be. It can be unclear that you’re supposed to go a certain way and you often won’t know that you can even do a thing the game requires. 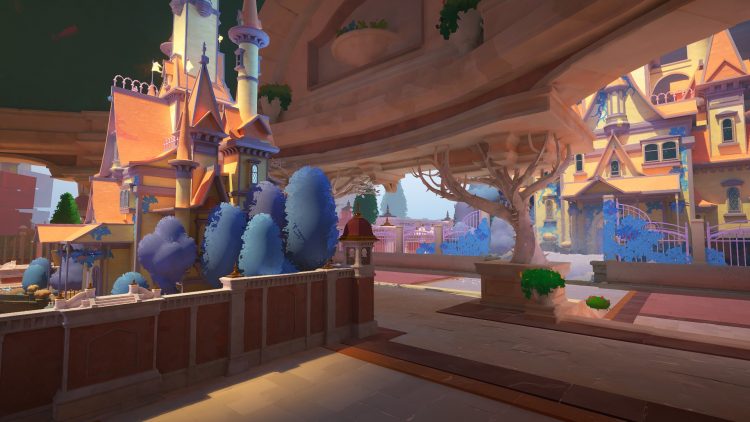 I thought one late-game puzzle was stupendous at first blush. After walking through a room with a giant key, the next contained two more keys in pits, all three linked in size. The locked door in front of me had a keyhole, obviously requiring a certain size of the key in order to unlock it. But there’s an empty key mold near the door that shows what size the key needs to be. I spent half an hour carefully trying to make the right size of key to open the door, only to give up when I realized that it was strangely impossible. It turns out that there were three keys for literally no reason and that I had to do something else entirely. It was a massive shame too, as the puzzle it seemed to imply would have been marvelous.

In the end, Maquette is a game worth playing for its story, themes, and fascinating gameplay mechanics. Poor signposting and some confusing puzzles diminish it, but can’t strip the game of its obvious strengths. This is a deeply emotional game that spoke to me on a level that I wasn’t expecting, and I very much appreciate its accomplishments. But its issues also greatly annoyed me in spots. The game’s length is par for the course and will take most people three or four hours to get through. Depending on how long they get stuck, anyway. I can easily recommend the game, but don’t be afraid to consult a guide. 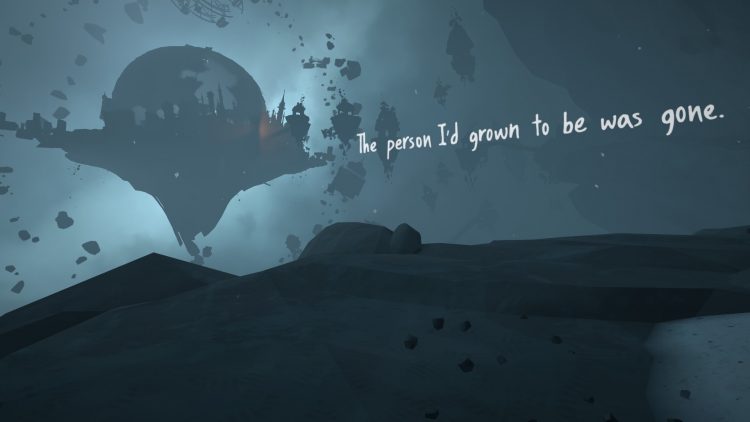 Maquette has a strong narrative bolstered by top-tier voice performances and honest, relatable writing. The puzzle mechanics are unique and exciting, but the game is let down by signposting issues and obtuse design choices.