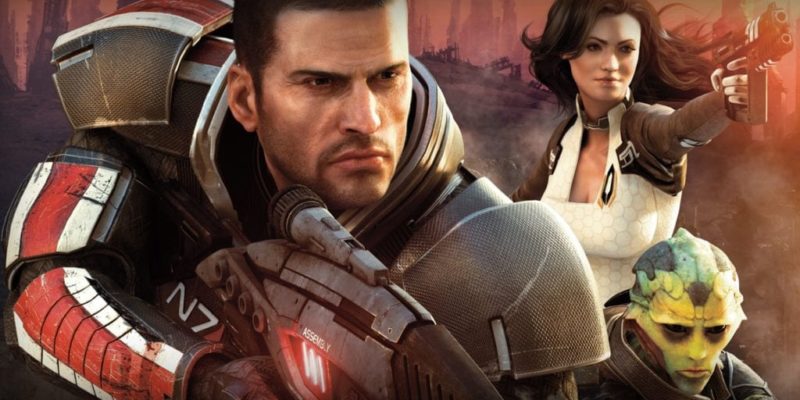 Last year the team in the office were raving about Mass Effect 2, I was probably the only person in the office who didn’t to get stuck into the sequel. I did have a sneaky look in on some of the review playtime however and their enthusiasm for the game  piqued my interest in Bioware’s franchise.  I picked up a copy of the PC version of the original game a few months ago. I wasn’t exactly enthralled with the original, mainly because it wasn’t up to much on the PC thanks to horrible controls, and it was already looking pretty dated.

Having missed out on the sequel, I thought this would be an ideal opportunity to find out why everyone was gushing over it. Could the sequel change my mind about Mass Effect? After all, the third game is on its way, and I don’t want to miss out on that now everyone is talking about it.

Tim summed up Mass Effect pretty well in his mega-review last year so I won’t cover the PS3 version quite as in-depth, you can read Tim’s article to get into the nitty-gritty, but what I will discuss here is my impressions based on playing the game for the first time right the way through.

Bioware have come on leaps and bounds over the years and they’ve gathered quite a reputation for churning out a cracking story. Mass Effect 2 is no different, it’s all about getting pulled into the characters and becoming part of their storyline. Don’t worry if you missed the first game.  PS3 owners can flick through a comic that comes as part of the extras that explains the backstory further and offers more details on the colourful characters.

Quickly recapping, you play either a female or male version of Commander Shepard and you’re back to hunt down the threat of the Collectors, an alien race that are darting around space wiping out human colonies. As you do.  The Cerberus organisation are hell-bent on stopping the Collectors and you join them in their fight guided by the rather mysterious ‘Illusive Man’.

If you’ve never seen Mass Effect 2’s introduction scenes then you’re in for a real treat. Bioware set the scene brilliantly in the first ten minutes with some fantastic in-game cinematics, and by the time those are over, I’d be surprised if you weren’t hooked.  With a few small points of interaction during the cinematics players are eased into the game’s controls, which is just as well, there’s are a lot to remember as you progress.

As your adventure gets underway, you need to recruit companions to join your squad to save the universe, everything from ruthless thieves to mercenaries. These guys are the best at what they do, and as the story progresses, story arc missions emerge around these characters. This is why Mass Effect 2 works so well, the game is driven by story, it’s not about constant battles. After all, this can be considered an action RPG, even if the RPG elements are not too in-depth. There is the obligatory character customisation and class selection that will more than likely have you playing the game more than once and of course the Paragon/Renegade system which shapes your character based on decisions you make during the dialogue and missions.  This offers great replayability opportunities.

Love dialogue in your games? You won’t be disappointed. To create a compelling experience that changes based on decisions you make, the game’s dialogue is key to driving the game’s direction. How you react in a conversation can change the path or change the way in which you tackle a mission. The voice acting is absolutely superb and it makes you feel like you’re taking part in a cinematic experience, not something that is easy to pull off convincingly in videogames. If you simply want to get on with the shooting then all dialogue can be quickly skipped but I urge you not to, if you don’t get engrossed you’re going to miss a hell of a lot. On some occasions when you explore the dialogue enough the questions and answers get repeated, but this is a game after all, and there has to be finite responses. It’s never a problem however.

At its core ME2 is a third person shooter but it ‘feels’ like so much more. This is down to the open-ended structure of the game, Bioware allow you to move through the game and story at a pace that suits the individual. Gamers who want to spend more time exploring can, and this gives the game a very open world sand-box feel. Missions come into your messages and there’s not always a particular order you need to do them in, even if you inevitably end up back at where Bioware think you should be in the story. It’s all very cleverly pieced together.

Controlling your Shepard can feel a little daunting at first.  There are multiple control wheels which not only select powers but there’s also the weapons wheel, both activated by the left or right trigger. Due to the pace the game moves, with gameplay and cutsecenes, you’re never thrown into a firefight without having plenty of practice with weapons or skills, and thankfully, it all becomes second nature.  It’s worth spending time carefully selecting weapon load-outs and upgrading, some missions are easier if you get this right.

So how does it look? Bloody fantastic. There was some concern that the PS3 version wasn’t going to cut it based on the demo that was released, but the demo build turned out to be two months old. I can safely say this is probably the best looking ME2 yet. It feels sharper than what I saw of the 360 version and it plays like a dream.

If you really wanted to play this game when it was originally released you probably have,  but there’s going to be a large portion of PS3 only owners that need to add this to their shopping lists when it hits the shops. With all the DLC included in this release, (the Dragon Age armour looks brilliant in case you were wondering), it’s a great purchase. Trust me, you will not be disappointed if you love great story-driven games that look great, feel very open-ended and have fantastic third person action. Mass Effect 2 is brilliantly crafted, no wonder it ended up as the IncGamers Game of the Year for 2010. Buy it.