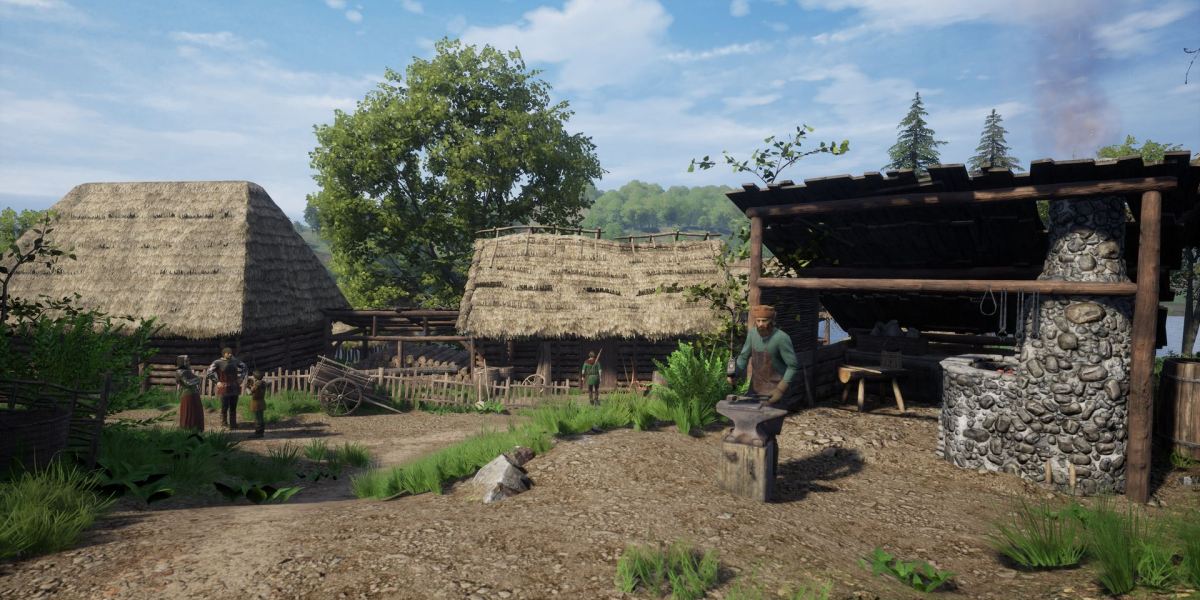 Medieval Dynasty, on the surface, appears to be a rather simple game. You don’t fight dinosaurs or trek across forgotten, mythical deserts like other survival games. That’s okay, though, because it’s about simplicity and living the life of a medieval peasant. Render Cube’s survival management sim offers that laid-back experience on the surface, but beneath it all is an intricate system of resource and worker management, base building, harvesting, and roleplaying. 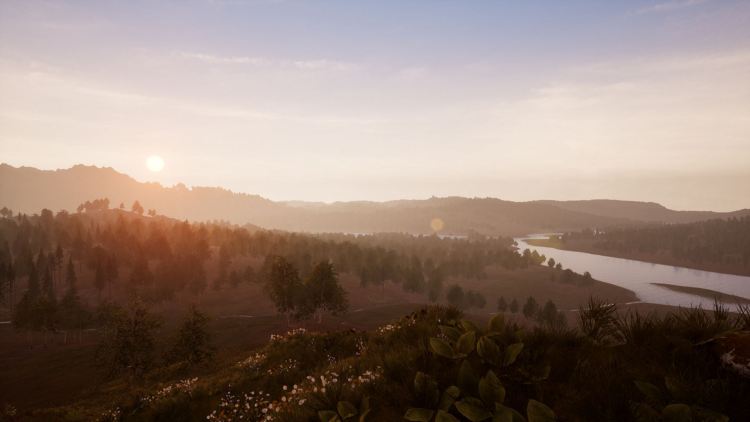 The game world is four square kilometers of forest, grassland, and mountains.

During my hour-long preview of Medieval Dynasty I saw a basic overview of most of the systems currently implemented in the game. In the beginning, you start out with only the clothes on your back and a few apples in your pocket. You wander along a worn path in a forest. Deer scatter as you approach, but you don’t yet have a bow to hunt them for food and leather. Instead, you trek forward until you crest a rise and a river valley opens up before you.

The game is still in pre-alpha, but the graphics are already quite nice. Medieval Dynasty boasts an art direction that leans on the natural and realistic. It reminds me of Warhorse Studios’ own medieval simulator, Kingdom Come: Deliverance.

The world of Medieval Dynasty is four square kilometers (that’s roughly two-and-a-half miles for you Americans). Its breadth certainly seems impressive enough — at least from the perspective of a homeless peasant. Down in the valley, a village nestles up against a river. As you approach, farmers tend their fields, cows lay lazily in the grass, and geese wander aimlessly. 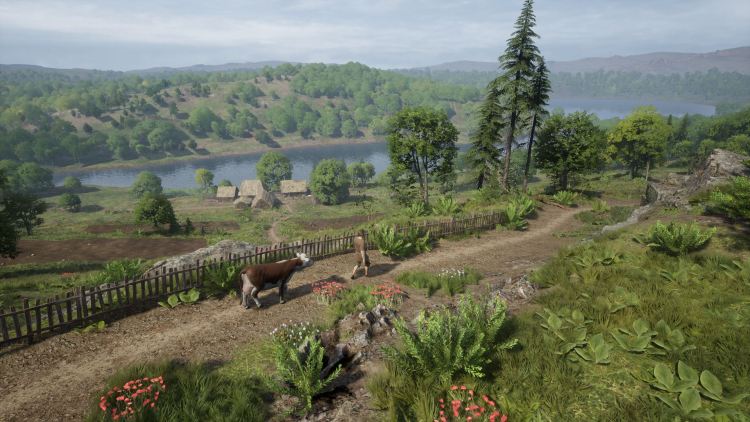 NPCs perform their work during the day before settling by a campfire to relax in the evening.

Eventually, you meet the town castellan, and he informs you that you can live there. Cool. But you’ll need to pay taxes and build your own house. Not so cool. He also tells you that you’ll need tools, but unlike most roleplaying games he doesn’t give you any. Nope, he’s got his own work to do, so you’re sent out to gather rocks and stone to fashion some of you own.

This is where Medieval Dynasty shares most of its DNA with other games. The basic system will be familiar to anyone who has played a survival-crafting game before. You gather resources, build tools, drink water from a river, and eventually build a tiny starter house to store resources. It’s familiar, but it’s also relaxing; there isn’t the threat of a T-Rex wandering over and munching on you for lunch. You’re just a hard-working country boy, chopping down trees while birds chirp nearby and quaint medieval music plays in the background. 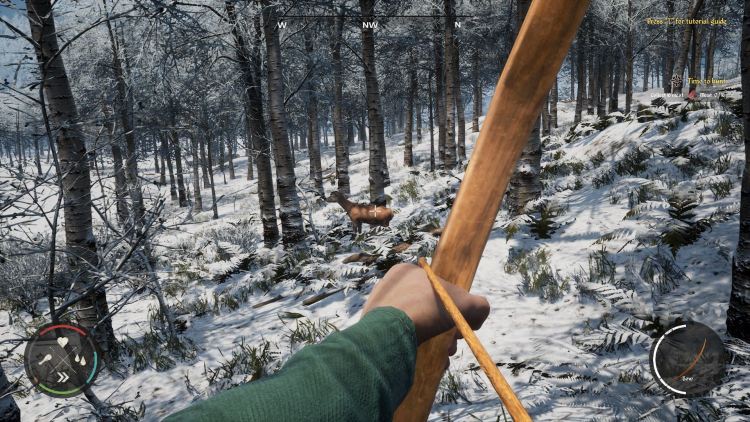 Hunting game provides both food and hides for crafting purposes.

It won’t stay quaint forever, however. Life in the medieval era wasn’t exactly easy. You happen to arrive in the village in the spring, when temperatures are cool and game is readily available. As seasons come and go, the entire game world transforms. You can’t walk across a line and arrive in a new biome to escape freezing or sweltering temperatures. Instead, you’ll have to prepare.

Once you’ve built your own home and fashioned some good tools, you’ll move onto other familiar survival-crafting elements. You can craft rabbit traps or fashion a bow to hunt deer, and you can begin consolidating resources in your storage. However, you can also start taking up quests from the village residents.

You have roles to play

Multiple NPCs in Medieval Dynasty will offer various quests for you. True to the game’s nature, they aren’t anything epic. One man might ask you to help repair his thatch roof, while another might ask you to go hunt some deer for him. In return, you’ll earn money, tools, experience, and dynasty reputation. 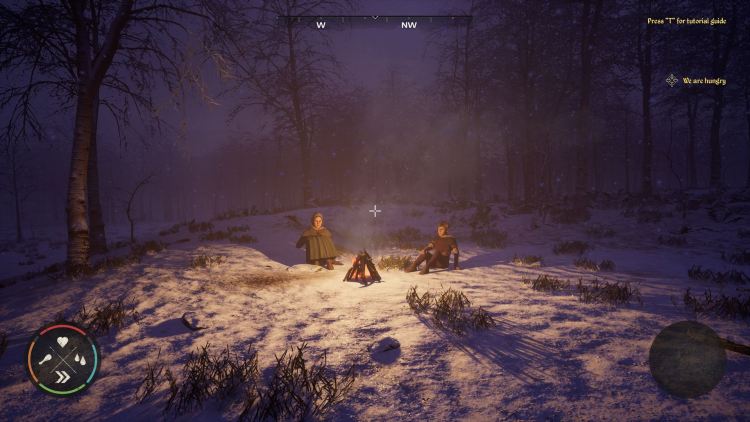 You’ll have a wife and son to carry on your dynasty once your first character passes away.

As your character gains levels you will be able to specialize in different areas. You can make yourself more efficient at mining, hunting, husbandry, fishing, diplomacy, farming, or crafting. NPCs also share these specializations. Bob the miner spends all of his days in the local iron mine, so he’s not very good at tending to cows, and vice versa for any character who looks after animals.

Your character in Medieval Dynasty will also age. It is, after all, a game about dynasties. To that end, you’ll need to find a wife and marry her, raise a family, and prepare a son to take over your land by passing your knowledge over to him. Eventually, your first character will pass away. It might be from old age or disease or from an unfortunate run-in with a bear, and your son will inherit your lands and goods and workers. And then he becomes the player character.

Once you’ve met your basic survival needs and established a name for yourself, you can set out on creating your own village. The first choice is where to locate it. You can head up into the mountains near plenty of iron, or you can locate it alongside the river for easy access to water and fishing. You’ll soon need some workers to start making things easier for yourself.

First, you’ll need a place for them to stay. Build some lodging and you might be able to convince Bob the miner to come on down and work in the iron mine you are setting up. A large village might have a dozen villagers working in different jobs, just like the first village you wandered in when you had nothing but clothes and apples. Play your cards right, and you’ll soon be a castellan of your own village — or villages. 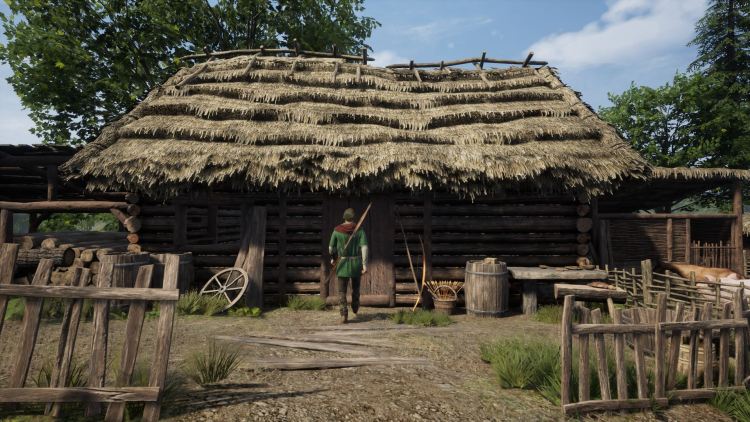 Building nice homes for your town will help convince villagers to stay.

You’ll need to pay attention to your villagers’ happiness by making sure they have access to good lodging, good food, and good pay. If not, they might pack up and leave for another village. You’ll need to be sure to plant enough crops or send out enough hunters to keep food, and then store enough to see you through the leaner winter months. And watch out: rats might try to get into your grain supply.

You can make sure you have enough money by trading with other villages. If your mines are producing high amounts of iron and salt, you can head on down to trade with other villages that might not have easy access to such resources.

To me, the management aspect of Medieval Dynasty is the most appealing. I’m a sucker for construction and management sims, but it also seems fleshed out in ways that other survival-crafting games aren’t. Conan Exiles has thralls, and Ark lets you manage a herd of dinos, but developer Render Cube is aiming for a more complex system with its medieval life simulator.

Overall, Medieval Dynasty seems like a promising game. It’s taking elements from several genres and trying to create its own identity. I worry that once you have a town up and running the game might lack further obstacles for you to overcome, but that is where the dynasty system might come into play. If Render Cube can utilize it to create interesting scenarios or decisions, it could offer players a lengthy gameplay experience as they try to create their own Medieval town and establish their own lasting dynasty.

Check out the Steam page for more screenshots and videos, or watch the first dev diary here.