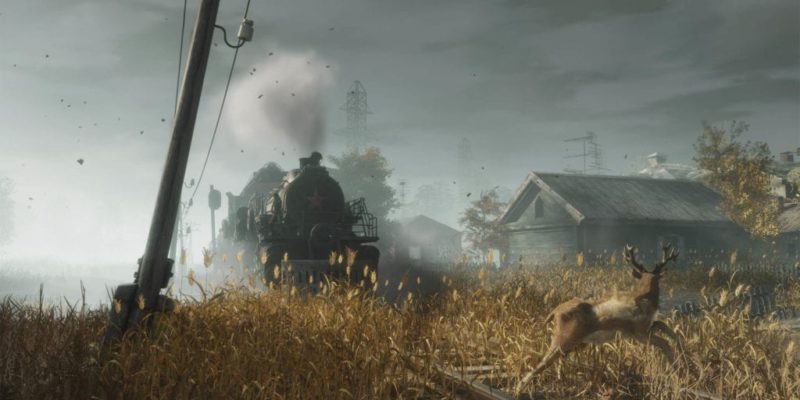 The disappointing launch of Fallout 76 has left an apocalyptic-sized hole in the gaming space, especially for those who prefer to adventure the post-nuclear wasteland alone in single player. In comes Metro Exodus, the third game in the action stealth shooter series, to fill that need. It doesn’t have any online features, but it has plenty of content, an extensive story, and a huge world to explore. Metro Exodus also happens to be an ideal game for those who currently own an Nvidia RTX 2000 series video card and want to try out the ray tracing features. So, let’s get packing for a trip! 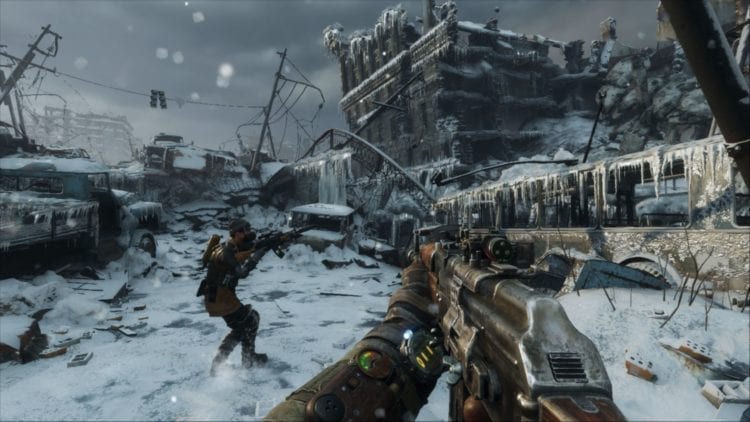 Life Beyond The Metro

Exodus continues the adventure of Artyom, his sharpshooter wife Anna and a group of soldier friends who have been surviving in Moscow’s underground metro stations after a nuclear war destroyed the world. Although the residents of the metro believe that there’s nothing left of the surface world except deadly radiation and killer mutants, Artyom discovers otherwise. That kicks off a year-long cross-country journey aboard an aging steam train called the Aurora, looking for the last remnants of civilization and a safe place to settle.

So, the major difference in the third game is that instead of being mostly confined to the dark, claustrophobic spaces of underground city-states, players are can wander the surface world and discover all new insane societies. There aren’t any neo-Nazis on the surface, but there are fanatics and Mad Max-style marauders to deal with. And mutants… so many mutants. 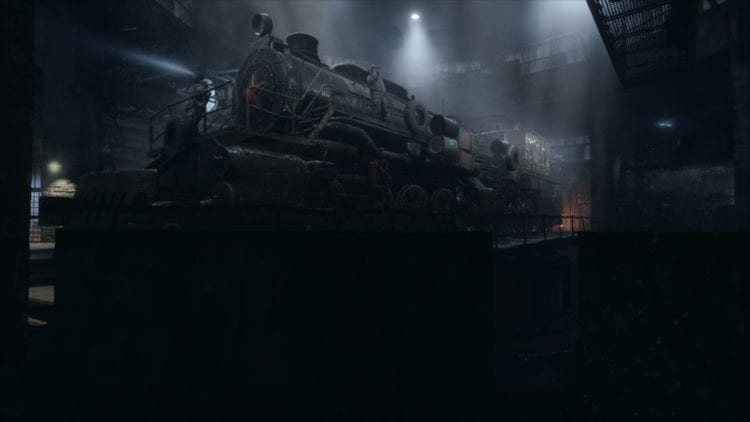 Other than the occasional patches of radiation, the surface world is quite magnificent. Each Exodus chapter embodies a season, going from winter, to spring, then summer and autumn before ending with winter again. Each new season is accompanied by changing landscapes that include everything from swamps to deserts, all gorgeous and deadly at the same time.

Ray tracing features make the world seem more alive with how it deals with lighting and shadows. Although I thought some of the shadows went a little overboard, with some details becoming extremely tough to see, I still thought the effects made the world look more natural. RTX is especially prominent with the gun details, showing more of its wear and tear along with the dirt it accumulates over time.

Welcome To The Open(ish) World

But even though the outside world is a welcome change for the series, the gameplay doesn’t fully take advantage of its potential. For instance, human enemies are easily killed in normal difficulty settings. I was once able to wipe out half the inhabitants of a bandit base by shooting through small holes in the shoddy roof using my silent pneumatic rifle, Tikhar. Other times, I camped next to entryways and slaughtered enemies as they stepped in.

Even certain bugs, like how a couple enemies were somehow able to detect and shoot me through a solid wall from forty feet below me, weren’t enough of an advantage for these ill-fated raiders. It doesn’t take a lot to outflank and outsmart the last remnants of humankind.

Similarly, the creature behavior can be disappointing. I was expecting creatures to hunt each other for food. Or perhaps there would be some way to use the wandering zombie mutants against my enemies. No such luck. Aside from a few scripted sequences, the creatures don’t interact with each other. Also, you’re the only one in the world they seem to be interested in harassing. All things considered, dealing with frightening creatures is one of the most annoying aspects of the game since most can’t be looted for gear. 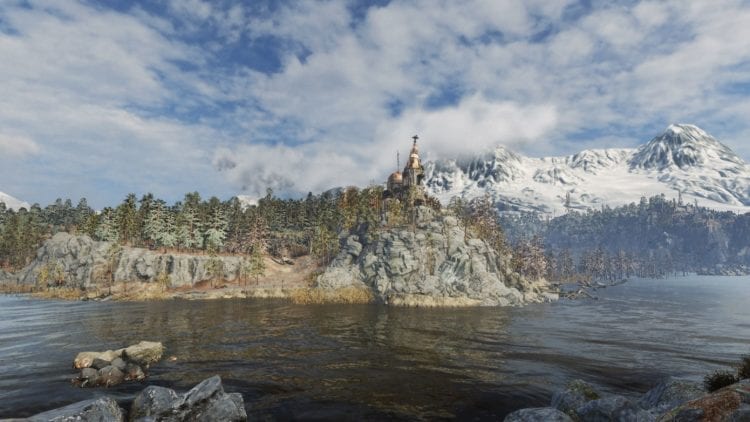 The day and night cycles don’t live up to expectations either. Although the game informs you that traveling at night is better – despite lower visibility and the appearance of some electrical anomalies – because marauders go to sleep, this is clearly not the case. In all my travels, I only saw one creature (a demon) go to sleep. Everything else stayed perfectly active and awake, including the humans who almost always complained nonstop about their post assignments. Scripted events, such as locking the slaves away after a day’s work, will happen no matter what time it is.

I started to wonder why there was a daytime cycle at all since nighttime makes stealth so much easier. Humans have a hard time spotting you, so sneaking up on them was a breeze. Also, considering how many indoor areas are naturally dark and windowless, you don’t necessarily need to run all the way back to a safehouse for a nap to get the cover of darkness.

Best I can tell, daylight is for enjoying the scenery.

One of the most important aspects of Metro Exodus is inventory management. You’re only allowed to carry three weapons at a time, but your backpack also serves as a kind of mobile workstation. You can use it to upgrade your weapons and craft certain supplies and ammunition, which turns out to be quite handy.

The downside is that you can’t craft ammunition for all weapon types using the pack, and the game can be a bit stingy with the bullets depending on your difficulty setting. However, this scarcity is overcome by how easy it is to take down and loot enemies. In some cases, I barely ever had to fire a single shot, leaving me with plenty of ammunition for the scripted battle sequences. 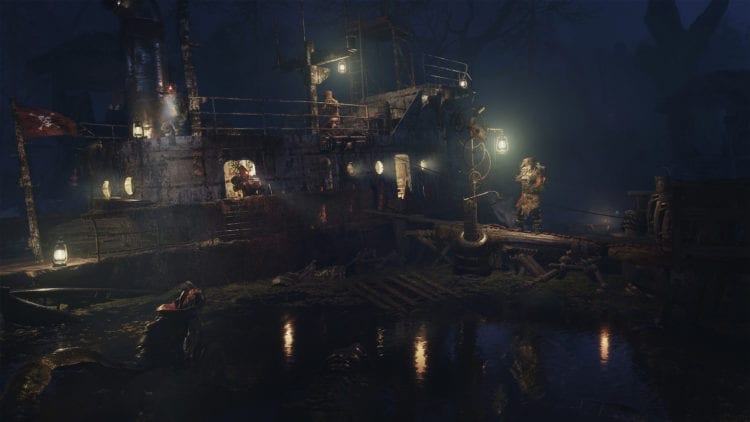 But even with all the drawbacks, Metro Exodus still managed to pull me in. Exploring the world, climbing to the top of tall towers, and ziplining to different locations never lost their charm, even with the annoying monsters nearby. There are plenty of side stories to experience, including an ongoing romance aboard the train that players can help foster. I won’t spoil too much of the plot, but things do grow quite insane, and it was thrilling to experience it all.

As with all Metro games, Exodus keeps track of your body count and moral decision points, as they will impact how the story plays out in subtle ways. In many cases, it’s a line of dialogue that either congratulates you for getting in and out cleanly, or remarks about how a mission turned into a complete massacre. Not everyone in the world is hostile, and they’ll praise you if you approach them with your weapon holstered.

Usually, no single action besides getting spotted will trigger changes, but actions will often add up. I’m not completely certain, but I think leaving people alive increases the odds that some enemies will surrender during a firefight. Or it could have been because I wiped out most of their numbers. Either way, their surrendering saved me ammunition.

Stay A While And Listen 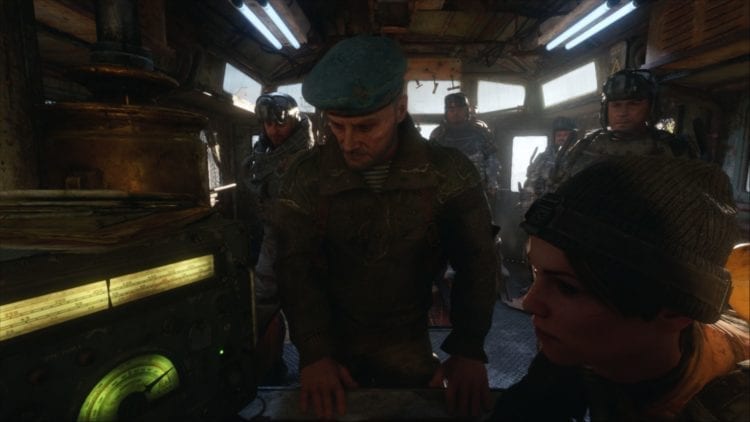 Remember those lengthy talk sequences from games like Half-Life 2? You know, the ones where players wander around the room looking for something to do while NPCs talk and provide exposition? Well, Metro Exodus has a lot of them, and some go on for a long time. In some cases, you don’t have much room to move around and may be stuck sitting by a radio. A number of these expository sequences are peppered with unnatural pauses, as though the characters expected you to walk away but continued talking anyway. So, you might think a sequence is over, only to find out that there’s more.

Some of these sequences can’t be skipped. Other times they provide some valuable hints or add more dimension to the world around you. But then are times when you wish characters would yap less and walk faster. Especially when the clock on your gas mask filter is ticking down.

A Note About Exclusivity

Although I’m not counting the launch platform as part of the review, I will say that Metro Exodus’ Epic Games Store exclusivity does impact some quality of life issues. At the time of this writing, the Epic Store doesn’t include many of the features that some might take for granted on more developed platforms such as Steam, GOG Galaxy, Origin, and Uplay.

Chief among the missing features is cloud saves. So, you’ll have to manually backup your save games if you want to play from a different PC or prepare for events like hard drive failures. The alternative is to hope that Epic will include these features soon or wait until the exclusivity period ends in 2020. Additionally, there doesn’t appear to be a way to run the Epic Games launcher in offline mode, so Exodus can’t be played offline either.

While Metro Exodus may be far from perfect, it does provide an exceptional experience. Artyom’s trip to the outside world may have fallen short in some respects, but the beautiful world and fascinating cast of characters more than makes up for it. Most levels are deep and complex, filled with incredible creatures. Taken all together, Metro Exodus is one post-apocalyptic adventure that’s well worth taking.

Although far from perfect, Metro Exodus provides a breathtaking game experience across a post-nuclear apocalyptic world.