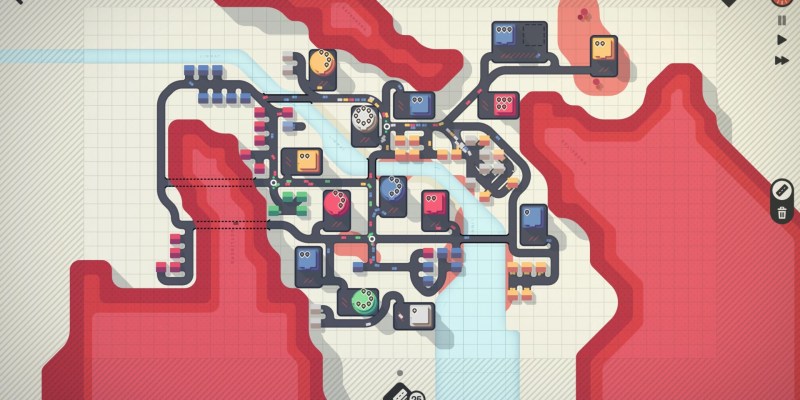 I can’t even begin to tell you the number of times I’ve been stuck at a weird traffic light or a screwed up a double roundabout somewhere and thought to myself, “Why in the holy hell would they design a road this way?” Well, after getting a substantial amount of time with the newly released Mini Motorways, suddenly these rambunctiously routed roads make a shitload more sense. Can this mass-transit mayhem stand up to the scrutiny of the PC audience, or will its mobile origins prove to be off-putting to the mouse and keyboard crowd?

When it comes to brilliant gameplay loops, it’s hard to top Mini Motorways, pure and simple. The main crux is that people need transportation, and it’s your job to help them navigate from their office to their homes… or at least their garages. Yeah, it’s a bit odd when you look back on it, but your job is to literally pave the way between like-colored garages and workplaces. Designing the road between the locations lays the groundwork for your budding metropolis, so it’s only a matter of time before things become a bit chaotic.

Slowing to a crawl

In the top-right corner of the HUD there’s a clock that acts as a timer, counting down to your weekly resource refill. Every Sunday, you’re given the choice between a couple of different item bundles, usually in the form of a combination of road pieces, and either a bridge, roundabout, highway, or tunnel. I found myself usually opting for whichever dealt me more pavement pieces, because I continuously felt as though I was always short on the resources necessary to scale my municipality’s commuter options.

Over the course of each week, new pairs of garages and businesses randomly pop up all over the map. You need to find a way to link these new garages to the existing traffic grid in a way that allows drivers to get to the newly christened business, while also not impeding the existing patterns in the process. Initially, maps have a fairly manageable footprint. However, the camera will pan out over time, continuously expanding the city limits, little by little. 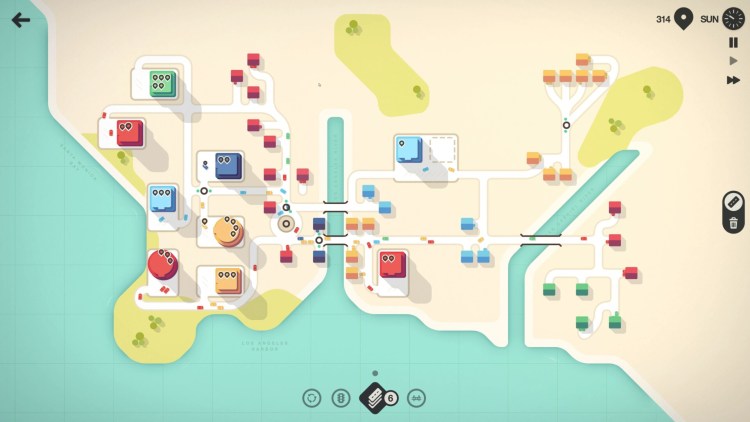 Early on in a Mini Motorways playthrough, the moment-to-moment action progressed at a fairly glacial pace. I found myself actually using the fast-forward option rather liberally for the first couple of weeks on any map. It doesn’t take long before things start to pop off at a rate that can be rather hard to keep up with, however. Essentially, there will be an audio queue that hits, signifying new businesses and/or garages have appeared. It’s up to you to actually track them down because very little is done to draw attention to the rapidly repopulating structures. It doesn’t take long for the early malaise to devolve into a pausing frenzy in an attempt to stay atop the constant changes to your urban footprint.

While this sounds a bit overwhelming on paper, the actual design and controls for laying and modifying roads help make it far more manageable than you’d originally think. As long as they are not currently in use, roads can be built or destroyed on the fly. Laying roads can be performed with a simple left click of the mouse and destroying them is mapped to the right click. Blowing away an existing piece of traffic results in that same tile being re-added to your inventory. This leads to a ton of experimentation with roadway designs, while safely shielded behind a pause button. Sure, there may have been moments when a quick pivot in strategy resulted in a little more heartburn than I’d like, but if you manage to successfully pull off a redesign on the fly, you’ll legitimately feel like the smartest person in the world. 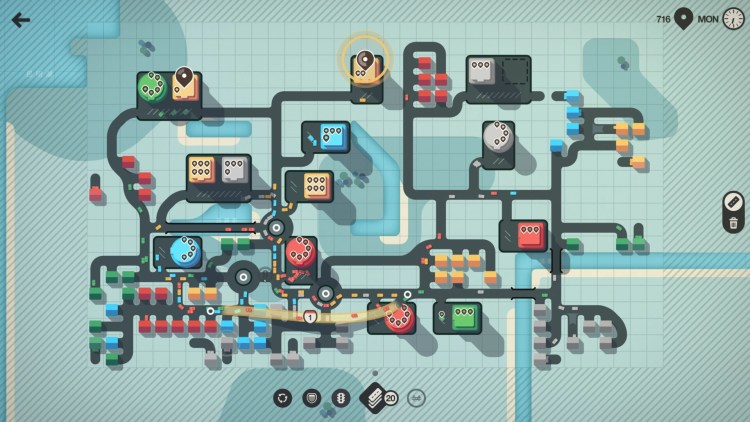 Mini Motorways‘ infectiously addictive gameplay loop didn’t take long before inducing an almost Zen-like trance. I believe I stated it pretty succinctly when I informed our Reviews Editor that this is the sort of experience that would be like catnip for stoners. It’s a singular, repetitive task that you can repeat continuously, and somewhat requires an talent for thinking outside the box. What better way to not become too attached to your city’s design than simply not caring about the overall outcome? If you’re looking for an opportunity to both turn off your brain, while still feeling really smart, look no further than Mini Motorways.

Over the course of the campaign, you’ll be treated to maps from locales around the world such as Beijing, Moscow, Dubai, and Mexico City. In all, 11 locations make an appearance. But, honestly, I’d be lying if I told you that any single location stood out from the crowd. Aside from the occasional geographic difference, there’s very little that I would consider an identifiable feature, unique to a singular setting. One admittedly nitpicky item that jumped out at me was the fact that on maps like Tokyo or Manila they should actually be driving on the opposite side of the road. 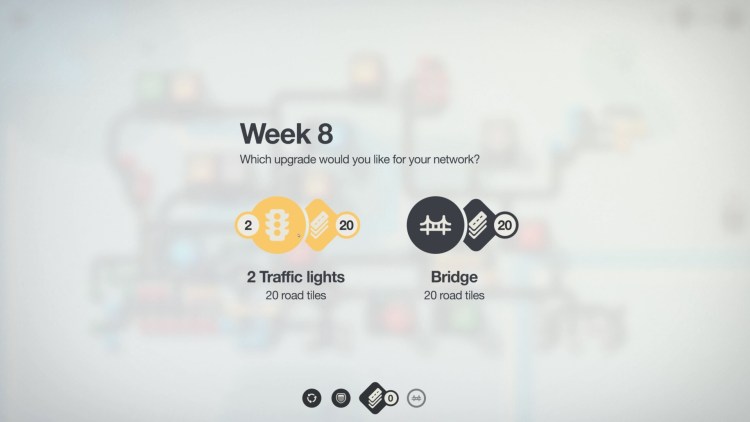 When it comes to Mini Motorways, the biggest weapon at your disposal is time. The more time you’ve played the game, the more opportunities you’ll get to make bad design decisions. Only through experiencing these mistakes firsthand will you be able to prevent them from happening in the future. One such strategy is segregating the garage traffic away from the primary traffic loop. Just connecting garages willy-nilly along the primary thoroughfare is essentially treated as a four-way stop for all traffic, so it can be debilitating to the flow of traffic, and as such, should be avoided wherever possible.

Proper usage of roundabouts was also a key understanding to grasp early on. These unique intersections, which I genuinely despise in real life, can be used for facilitating oddly shaped traffic merges, or simply slow down the flow of traffic, without interrupting it outright. Granted, they still look like a civil engineering science fair project, but at least it was nice to finally understand their true purpose.

As I’ve mentioned earlier, the fact that each location doesn’t have a look all its own proves to be a bit anticlimactic. Once you’ve cleared each map, the only new bit of content is a rotating daily and weekly mission that has a limited collection of modifiers in place. Personally, I wish the developer would’ve made playing with modifiers a replay option, as it would help boost the title’s replay value immensely. 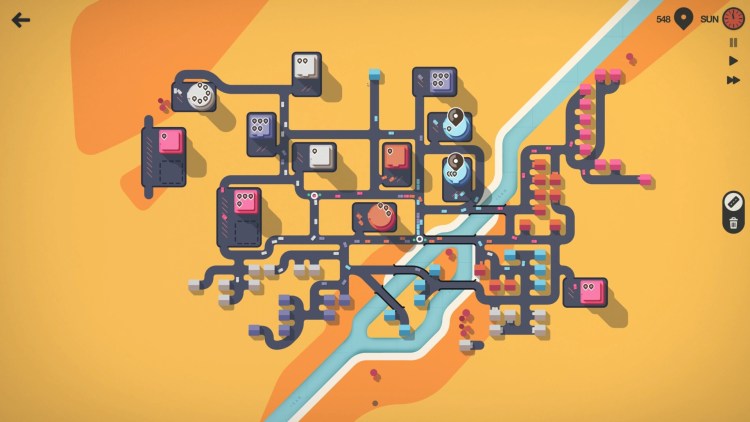 The other day, I spent the better part of an hour coming up with ways that Mini Motorways could be minorly modified in order to extend the shelf life of each location. How about inheriting a failing city, in desperate need of repair? What about a “no pause” or “fast-forward only” mode? Hell, you could even introduce a hardcore mode where the roads would slowly break down over time and need to be repaved. It seems like this could be extremely fertile ground for enhancements later on down the road. If you need any more ideas, Dinosaur Polo Club, let me know. I’ve got plenty of concepts I’d like to see moving forward!

If I’m being realistic with myself, I will wholeheartedly admit that Mini Motorways is a fantastic conceit for a game. However, if I’m being just as honest with myself, I also can’t shake the feeling that this is a one-trick pony, in desperate need of a better trainer. Had there been alternate modes or unique angles to the gameplay, it would have been a huge step in the right direction, but in its current state, every stage looks and plays far too similar. Fortunately, when your title clocks in at a mere $9.99 USD, you’re granted a bit more leniency in the variety department. I genuinely enjoyed every minute spent playing, so consider this your green light to give it a look.

Despite its rather brief runtime, Mini Motorways shows what made the game so successful on mobile platforms. Featuring a gameplay loop that's hard to resist, the only thing holding it back is a lack of true variety. Luckily, when the gratification loop is this intoxicating and the price is so minimal, the limited replay value can be easily forgiven.