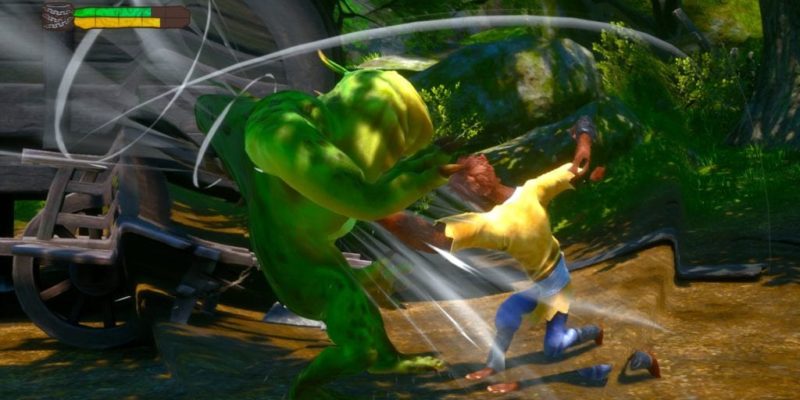 Before last week, I’d never heard of Monkey King: Hero is Back. When I first saw it, I assumed it was a hastily-translated Chinese game that was getting a bit more attention than normal. I did a quick perusal of its Steam page, only to see one thing that truly piqued my interest – the name Hexadrive. That developer is well-known as one of the places Japanese game companies turn when they need an extremely high-quality remaster done. Plus, they do original games too, such as 2012’s excellent E.X. Troopers. So, what exactly is this game anyway?

Monkey King: Hero is Back is a video game adaptation of the 2015 Chinese CGI movie of the same name. The movie’s Chinese title translates to “Journey to the West: Return of the Great Sage.” But for whatever reason, it was marketed in the West under this fairly awful, grammatically incorrect title. That title has followed the game as well.

As the translation suggests, the story is partially based on the classic 16th-century novel Journey to the West. At least, it’s based on the very beginning, where Sun Wukong challenges the heavens and is imprisoned in a mountain by Buddha himself. Half a century later, a child named Liuer accidentally frees him while on the run from mountain trolls attempting to abduct him and the baby he’s protecting. The evil Hundun is abducting babies to harvest their souls for eternal life, and Sun Wukong is the only one that can stand against him. 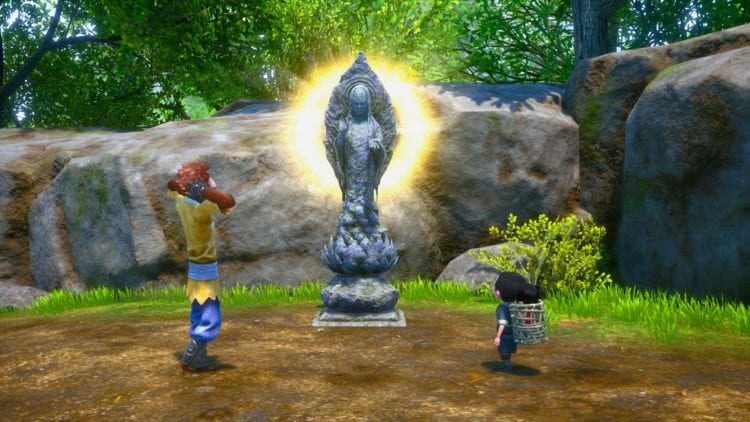 You can save, upgrade your spells, and backtrack to places you’ve already been from these statues.

Monkey King: Hero is Back uses the character designs and basic plot of the movie, but it’s more of a reimagining than a straight adaptation. The tone is different, for one. The movie is really silly, in the way many children’s cartoons are, while the game is more subdued. The characters are different too, with Sun Wukong being much less friendly here.

I actually liked the tone in the game more, even though it cuts pretty much all of the movie’s initial setup, which weakens the overall story. Hundun just kind of appears at one point, with no attempt to really explain who he is or what he’s doing. This would be more understandable if the game was a straight companion piece and not a reimagining.

Monkey King: Hero is Back is completely translated into English with a full dub. The game’s dub is surprisingly much better than the movie’s. It’s provided by an English cast that does a really good job with the characters and dialogue. The characters are still quite annoying, especially when they scream every time an enemy is nearby, but the acting certainly makes it more tolerable. 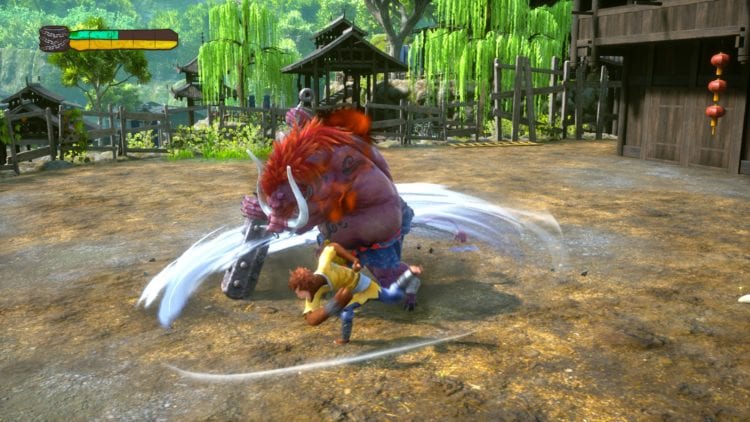 One of the only medium-strength enemies in the game. You see them several times, but they’re never thrown into regular rotation.

Everybody was Kung-fu fighting

What we have here is a fairly standard, linear beat-em-up. You play as Sun Wukong (who is strangely not once referred to as Sun Wukong in the game’s dub) and fight enemies from the movie, albeit in scenarios that often don’t happen in the movie at all. You make your way through levels jampacked with invisible walls and kick the crap out of everything in your way. Seriously, there are invisible walls everywhere.

Sun Wukong has a string of attacks he can pull off via several weak attack button presses or a single strong attack, which can have a faster version queued up if you use it in the middle of his weak attack string. Throughout the game, he learns various magic skills that will aid him, such as summoning a bench that doubles as a weapon and a shield, summoning needles to shoot at foes, or powerful attacks. He can also sneak, which can be used to surprise attack enemies or use sweep attacks.

The combat is solid and mostly pretty fun, although it feels a bit slow. Regardless, it’s responsive, and the dodge move can cancel out of your attacks and comes with a healthy dose of I-frames. The weak and heavy attack buttons also each have counters assigned to them. Pressing the weak button before an enemy strike connects will see you enter into a one-on-one against them, which is a quicktime event that culminates in their defeat. The strong attack counter, on the other hand, simply has Sun Wukong interrupt his foes with a strong blow that’s really powerful-looking and well-animated. 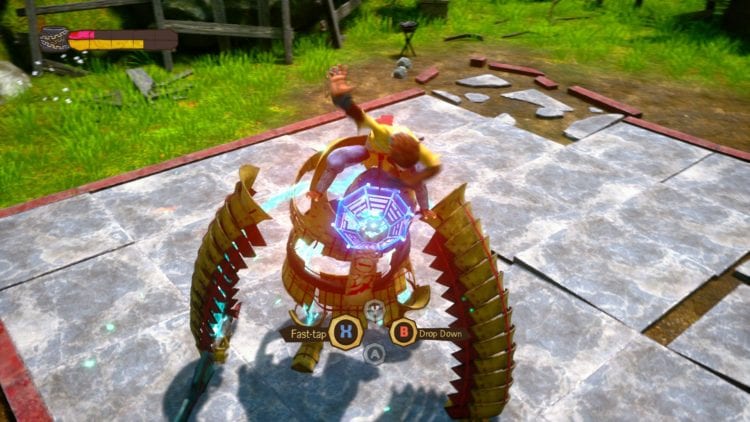 And here we have the other mid-strength enemy. These seem like a giant pain at first, but they go down insanely easy if you just counter them a few times. You don’t even have to do the quicktime event.

While the combat itself is fine, the enemies don’t really do it any favors. Most of them get defeated quickly, and they typically don’t require much effort at all. On top of that, the enemy variety is extremely low. The vast majority of the time, you’ll simply fight differently colored or slightly larger versions of the mountain trolls from the movie. Only once did I feel like the combat actually got to reach anything resembling its potential: during a boss fight against a shadow Sun Wukong. This had me using my full suite of skills and was a good amount of fun.

But Monkey King: Hero is Back is absolutely crazy about having you fight the same enemies and bosses over and over again. The shadow Sun Wukong fight and the final boss are the only boss battles that don’t get repeated. One of these, a fight against a rock golem, you have to do four times. The third time, it does at least get a new look and some different moves. But after beating that version, I was surprised that I had to fight him again about 15 minutes later during an obvious padding section where you needed to beat stronger versions of four bosses you already fought to get to the last boss.

Thankfully, the levels fare better than the enemies. The areas all look quite different from each other and are pretty fun to explore. You mostly just walk from one end to another, but you’ll need to find keys sometimes or open up ways for your comrades to make it through. You’ll mostly be walking, but there are occasional platforming sections. These don’t fare very well due to the jumping being iffy and imprecise. Most of the time, though, everything is invisibly walled off.

There are earth gods to find hidden throughout the levels, which you can trade in for upgrades to your health, magic, and basic combo. Harvestable items can be found all over the place, too, allow you to purchase items at a shop. 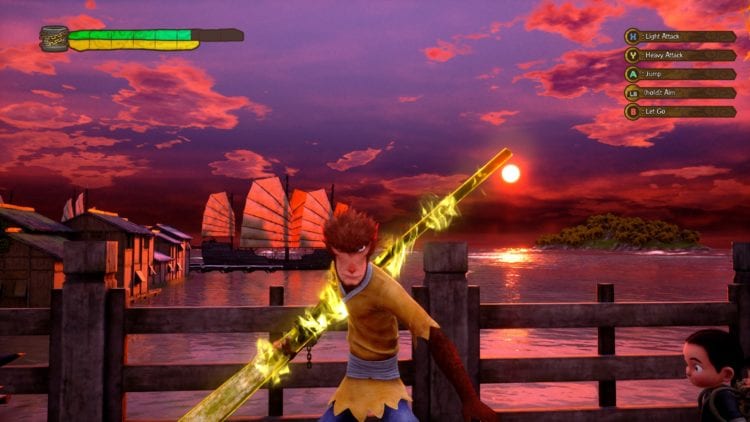 The game truly has some lovely art direction. Regardless of anything else, Hexadrive really made a very pretty game.

Aside from how fun the combat can be, one of the more surprising things about Monkey King: Hero is Back is that it’s honestly a lovely game. The character models are detailed and well-animated, with Sun Wukong in particular rendered very well – aside from when he talks. The levels themselves are often beautiful, too, with great use of color and lots of gorgeous vistas to gawk at. Whether you’re walking through a shaded jungle canopy, staring at the orange hues of dusk as it reflects across the water, or gazing at lush islands floating in the clouds, the game’s visuals are very nice. Disappointingly, however, the game is locked at 30 FPS, so keep that in mind.

I think Monkey King: Hero is Back is a decent game. I like the combat and the graphics a lot, but the extremely repetitious nature of the enemies and the way the game pads its runtime by making you go through the same fights over and over really drags the experience down. It’s not a long game, either, and will probably take most players about 10 hours. Strangely, there’s only one difficulty in the default version of the game, with the easy and hard options requiring a pre-order. That seems like a bad call.

At any rate, if you’re a big fan of the movie or are intrigued by the game’s visuals and the promise of summoning a bench out of thin air to beat a troll with, there’s some enjoyment to be had here. With more enemy variety, less restrictive level design, and better plotting, Monkey King: Hero is Back could have been a much stronger package as a whole.

Monkey King: Hero is Back

I enjoyed a fair amount of what this game had to offer, but the limited, claustrophobic nature of much of the navigation, coupled with slow movement, poor story, and extremely limited enemy types, make it a harder sell.